The flat where Inspector Rebus lives in author Ian Rankin’s crime novels has gone up for sale for more than £425,000.

The property in Edinburgh’s Marchmont area has been the detective’s home for all 22 of the bestselling books in which he has featured.

Rankin, 60, has previously identified the flat as being Rebus’s home and thanked a fan for alerting him to the sale. 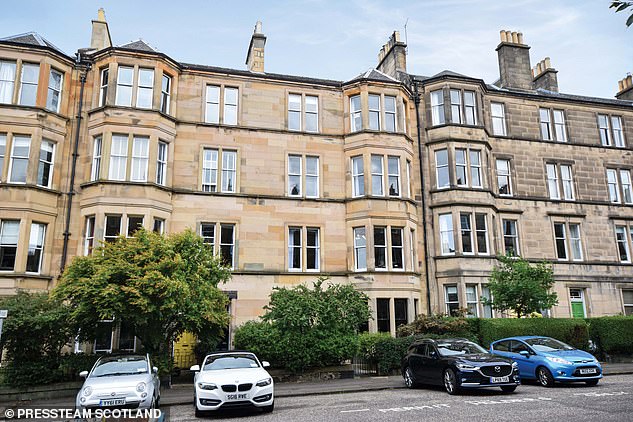 He said the timing of it was ‘odd’ as in his next book Rebus moves to a ground floor flat in the same block because of ill health.

It has three bedrooms and a ‘spacious bay lounge’ with ‘feature fireplace and ornate cornice’ and is on the second floor of a tenement block on Arden Street. 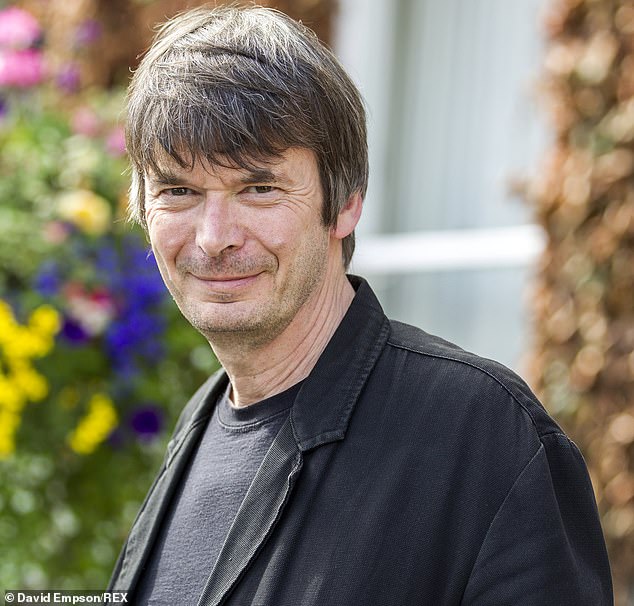 Ian Rankin, 60, said the timing of the sale was ‘odd’ as in his next book Rebus moves to a ground floor flat in the same block because of ill health

There is also a modern fitted kitchen with dining area and an en-suite shower room in the main bedroom. It also comes with a share residents’ garden and a parking permit.

Lucy Forbes, of estate agents Clyde Property, who are handling the sale, said: ‘The property has had good interest so far which is probably due to the location of the property. Marchmont is a highly sought after area and is very popular.

‘I would say the connection to the books may attract viewers and generate new interest, especially for Rebus fans.’

A sales brochure for the property reads: ‘Author Ian Rankin famously revealed that this flat was the home address of his popular character Inspector Rebus. 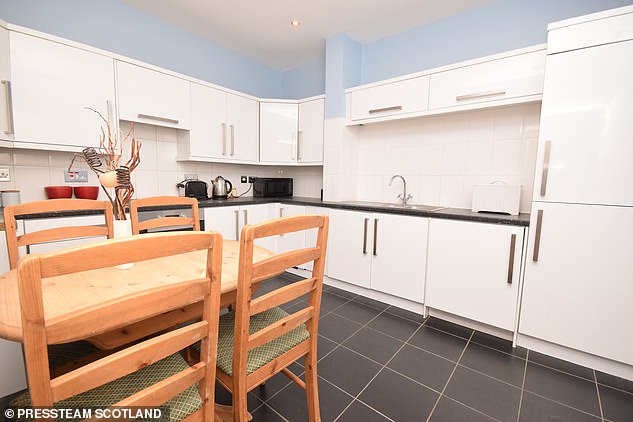 The flat has been put on the market for offers of more than £425,000 and has a modern fitted kitchen

‘The flat is in a great location for young couples and professionals but would also be an excellent acquisition for a buy to let investor.’

The Fife-born writer posted on Twitter: ‘This is very odd – just as I’ve got Rebus moving house at the start of the new book!’ 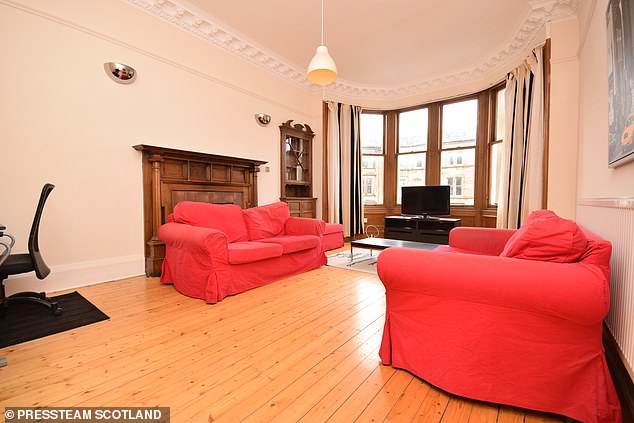 Rankin also joked that he was ‘good for a fiver’ after a tweet from Portobello Library suggested that Edinburgh residents should chip in to buy the flat.

The author lived on Arden Street as a student and decided to locate Rebus’s home in the building across the road from his flat.

In 2013, then Edinburgh University student Robert Kitney, whose family own the flat, admitted he had never read a Rebus novel.

He said: ‘My parents are fans of Rankin and were thrilled to discover it is Rebus’s flat. 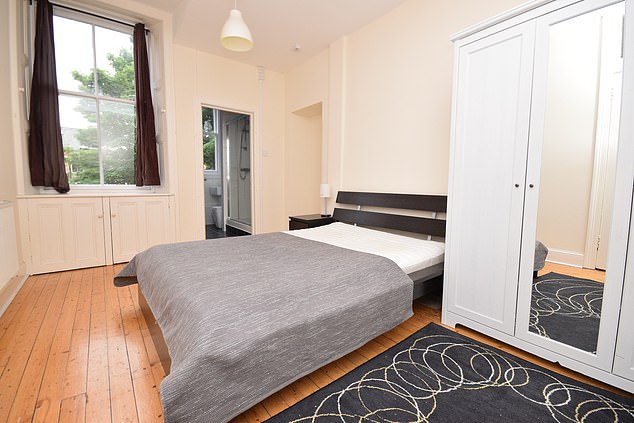 ‘I don’t suppose it will become as famous as 221b Baker Street – Sherlock Holmes’s address – but maybe we will get some tourists.

‘I suppose I’ll have to read the books now too.’

Rebus fans often gather outside the flat as part of organised tours of locations mentioned in the books. 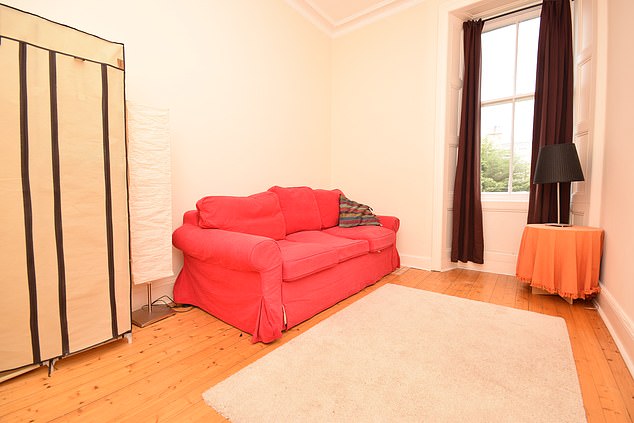 Describing the flat in the first Rebus novel Knots and Crosses, Rankin wrote: ‘John Rebus’s flat was his castle. Once through the door he would pull up his drawbridge and let his mind go blank, emptying himself of the world for as long as he could.

‘Many weeks ago, in a crazed state of righteousness, he had put up shelves along one wall of the living room, intending his sprawling collection of books to rest there.

‘But somehow they managed to crawl across the floor, getting under his feet, so that he used them as stepping stones into the hallway and bedroom.’

Rankin’s new Rebus book, A Song For The Dark Times, is due to be published in October. 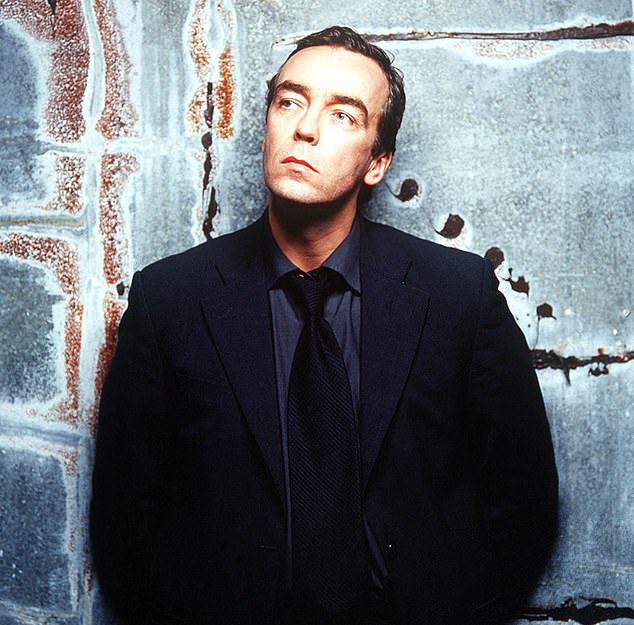 In February last year, Rankin revealed he was moving into the apartment of the arch villain in his crime novels.

In a previous book in the bestselling series about the Edinburgh police officer, Rankin moved crime boss Cafferty from a large home in the city’s Merchiston area to a luxury apartment in the Quartermile development.

The Arden Street property has been put on the market by Clyde Property.

Man, 21, drowns during bid to rescue dog from river – The Sun

Nigel Farage won't win a SINGLE seat, according to a politics academic