A five-year-old boy born with just three fingers can finally climb and do the monkey bars for the first time after a prosthetic hook was specially made for him.

Ted Washer has almost no thumb and index finger on his left hand, making it impossible for him to grip things.

He has always watched in envy as his friends scale climbing frames and swing on monkey bars in playgrounds around their home in Hernhill, Kent.

But since he got the C-hook hand that is designed for disabled gymnasts, Ted has been able to join them. 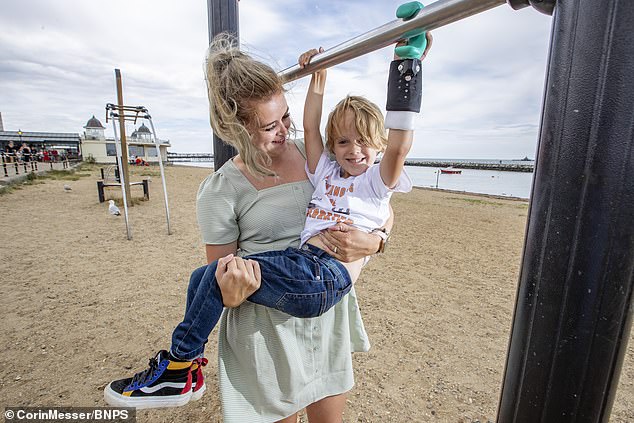 Ted Washer from Herne Hill, Kent, was fitted with a special prosthetic hook after telling medics he wanted to be able to climb the monkey bars. He was born with almost no thumb and index finger on his left hand due to a condition called amniotic band syndrome 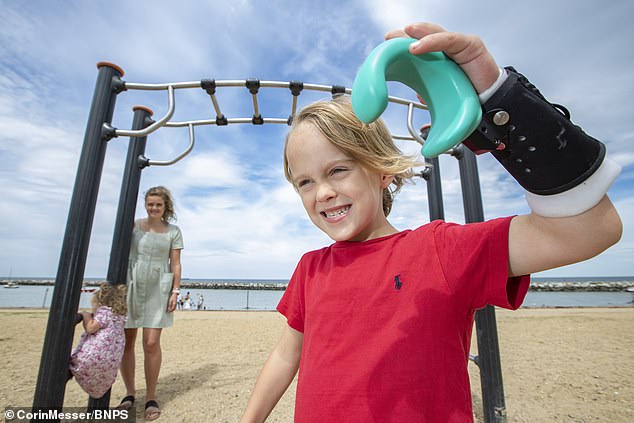 Ted pictured smiling as he shows off his £1,300 C-hook that helps him climb monkey bars 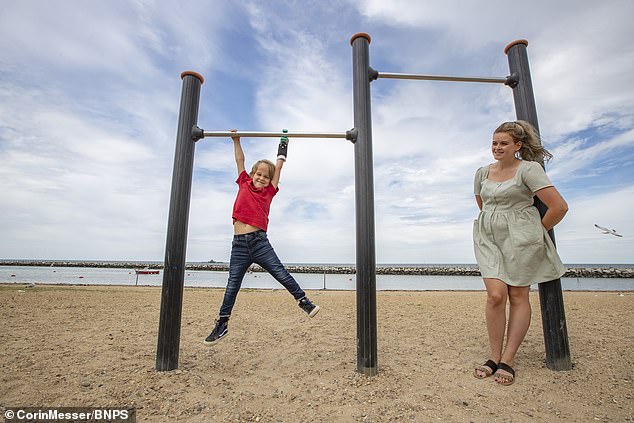 Mother Jade, 26, smiles as she watches her little boy scramble up the monkey bars

His proud mother Jade Stevens, 26, said: ‘Ted has been like George of the Jungle since he was given the C-hook.

‘He’s so happy swinging and hanging because he knows he’s not going to lose his grip and fall with it on.

‘He is also very excited about taking it to school. The Year 2 playground at his school has monkey bars are so he can’t wait. 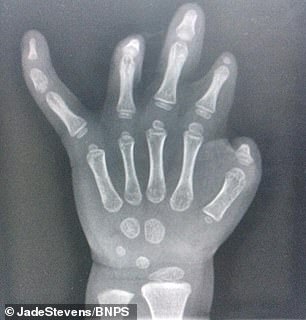 This is an X-ray of his hand. The condition means he has almost no thumb and index inger

‘He can get really nervous with taking risks because he knows he doesn’t have the grip so this is a massive confidence boost for him.’

Ted has a condition called amniotic band syndrome, which means fibres in his mother’s womb attached themselves to his fingers and thumb, essentially amputating them before he was born.

He had seen a prosthetics company in America that make single finger digits for adults but the family was unable to find anyone in the UK that makes them for children.

But then the family booked an appointment with prosthetics clinic Dorset Orthopaedic in Ringwood, Hampshire, where Ted told the team he wanted to climb the monkey bars.

After hearing this prosthetist Steve Cook recommended a C-hook, which costs approximately £1,300 and has the perfect shape for gripping.

He even had it moulded so that it would perfectly fit around Ted’s wrist.

The boy can have the cuff replaced as he grows and it can hold different devices for different tasks if there are other things he wants to be able to do in the future.

Mr Cox said: ‘When I talked to Ted the main thing he wanted to achieve was the monkey bars – he just wanted to be able to do it the same as everybody else.

‘So I went away and had a look at what might be available to make that happen.

‘There’s a company in America that deal with specific task devices. The hook is called a terminal device and you can get terminals for kayaking, cycling, hockey, mountain climbing, all sorts. The hook is designed for gymnastics.

‘We did this amazing cuff that the hook attaches to which is heat moulded so you can get the right fit for the individual.

‘It works perfectly for Ted and he can cup over the back of the hook with his hand so he has quite a lot of control with it and we made a gel sleeve to protect his arm.

‘It’s exactly what you want for monkey bars.

‘It’s not always about a £60,000 electronic arm and it might not seem like a big deal but it is when you are five or six years old and just want to do what your friends can.’ 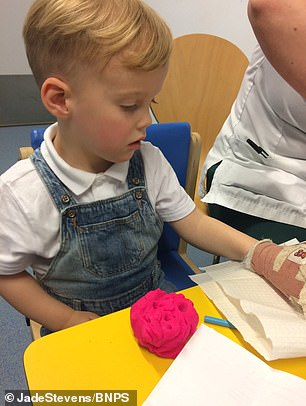 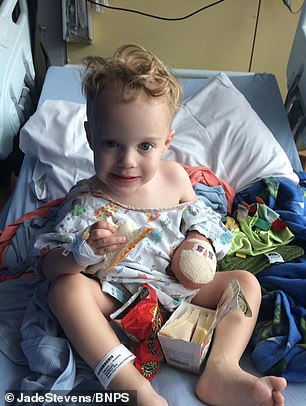 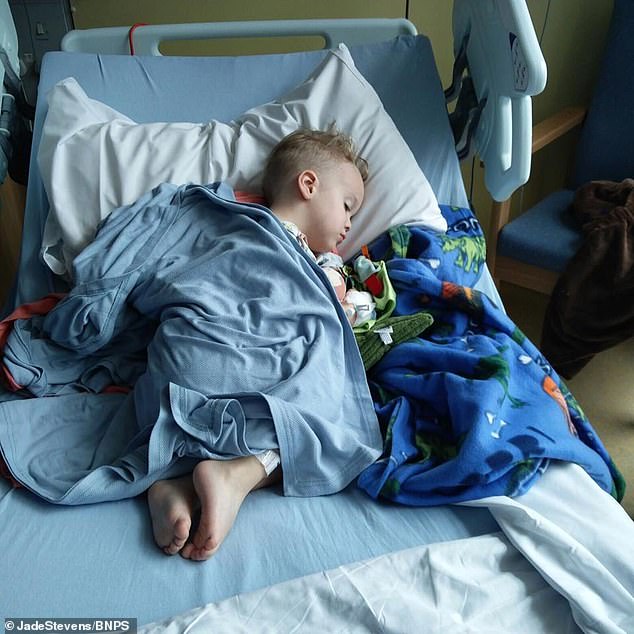 Ted has been practising his new skill with a bar his parents bought for the garden and loves hanging and swinging with little sister Margo, two.

Jade, a care home support worker, said: ‘When Ted was born he was missing the top of his middle finger on his right hand but that was completely healed and is fine.

‘His left hand came out like an open wound and you could see the band around his thumb.

‘His thumb fell off when he was about six weeks old so he’s missing most of his thumb and his index and middle finger are a lot shorter.

‘He has physio and has had three surgeries already on his hand and is scheduled for another.

‘The first operation they cut into the webbing between the thumb and finger to create a bit more of a thumb for him to help improve his grip.

What is amniotic band syndrome?

If these become wrapped around a limb, fingers or other body parts they may cause them to be amputated in the womb.

The condition can also result in webbed digits, nail deformities and stunted bone growth. It can also lead to miscarriages if the tissues become wrapped around the umbilical cord.

Up to 31.5 per cent of clubfoots are associated with ABS.

The condition occurs randomly and is not genetic or a result of the mothers’ actions.

To treat it, surgery can be performed to free babies of these bands. Procedures can also help to rectify webbed digits, while prosthetics can aid those that have suffered an amputation.

‘He’s also had operations where they take fat from his stomach and inject it into the tips of his fingers, which is very painful and he has to be very careful afterwards not to knock them.

‘We call it his lucky fin and say he’s our real life Nemo.

‘Handwriting can be a bit of a struggle, he has to have big pencils and special grips, and it took him a long time to learn to do his buttons up but he was so pleased once he could do that.

‘But climbing was the big thing.

‘We’ve told him this is the first part of his superhero equipment and we’re hoping he can get some robot fingers soon too.

‘Kids can be very curious and too inquisitive, sometimes they’ll grab his hands to look or things like that, which I think made him self conscious.

‘But now he says ‘everyone is going to want to have hands like me’ and he’s so proud to show it off.’

Personal trainer, 34, avoids jail after he choked his girlfriend

Our editors tried this $9 waterproof phone pouch — and it’s literally a game-changer: ‘A must-have!’