A man snorkelling in Belize found himself in a battle for his life when a crocodile clamped down on his head and tried to pull him into a death roll.

Joshua Young had been spearfishing in a popular tourist snorkelling spot down the road from his home on the island of Caye Caulker, on April 8 when he thought a canoe had bumped into him.

Suddenly his head was in the jaws of a crocodile and he had to pry the 10-foot-monster’s jaws open after dragging himself and the beast to shore.

Joshua suffered life threatening injuries during the attack including lacerations to the head and throat, nine fractured fingers and his heart stopped during surgery due to the amount of blood he’d lost.

‘I felt a canoe run into the side of me so I lifted my head up and had a look around but there was nothing, there was no canoe or boat,’ the 28-year-old bartender said.

‘I put my head back under and immediately felt something latch onto my head. I didn’t know what it was. It took me a few seconds to realise ‘oh sh*t, it’s a crocodile.” 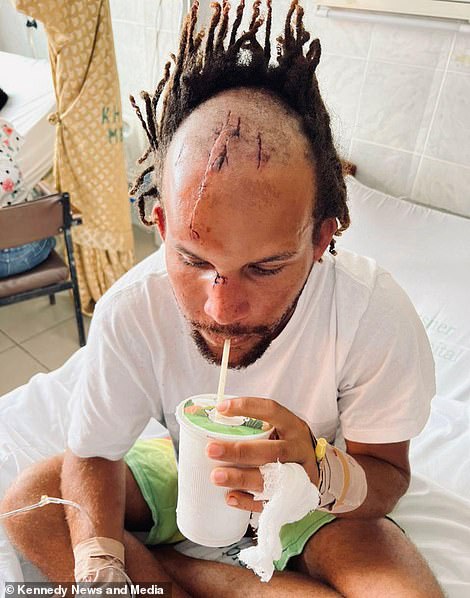 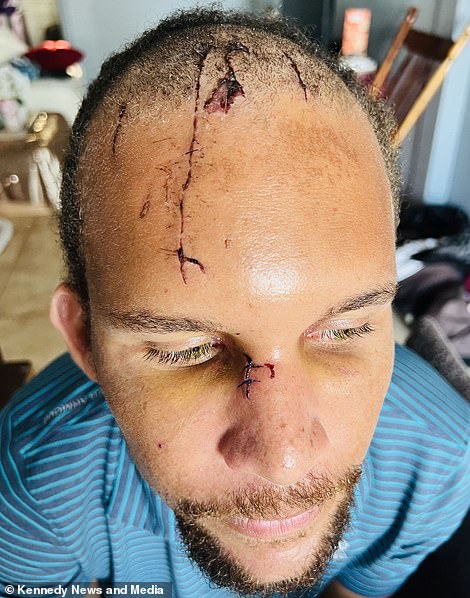 Joshua Young had been spearfishing in a popular tourist snorkelling spot down the road from his home on the island of Caye Caulker, on April 8 when he thought a canoe had bumped into him 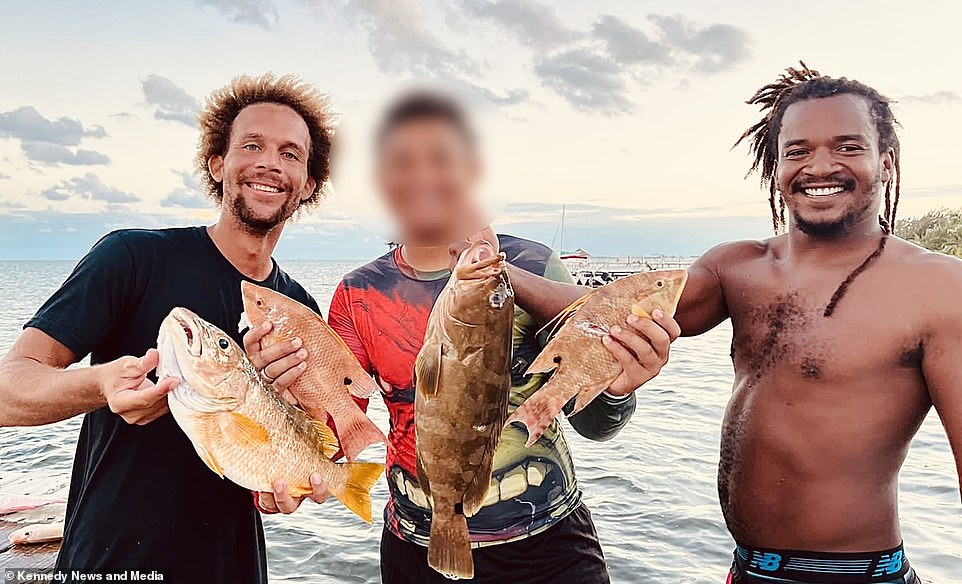 Joshua, a 28-year-old bartender suffered an horrendous crocodile attack while he was spear fishing with a snorkel last month 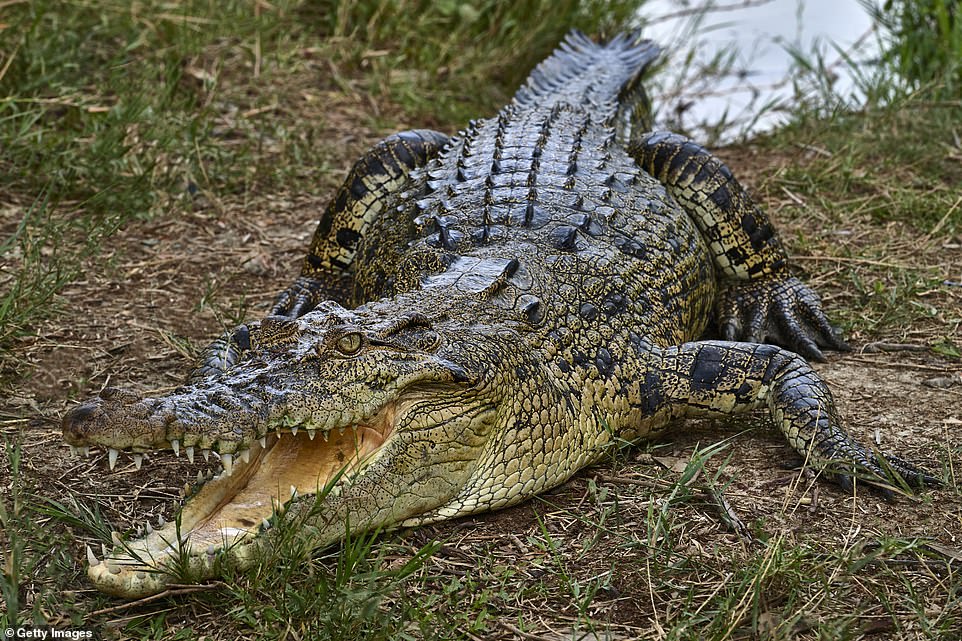 It is likely that Joshua was attacked by a Morelet crocoile which prefers freshwater habitats such as rivers and swamps and is found throughout the country. Over the past ten years there have only been 12 reported crocodile attacks in Belize of which only two were fatal. Above: file photo of a crocodile in Bangladesh

An epic underwater fight for survival ensued, with Joshua using his flippers to counteract the twisting motion of the crocodile and stop himself from being dragged into a death roll.

The spear gun in his hand was of little use as it was too long and he was unable to stab the creature with it.

‘It was trying to get me into a death roll. The current was so strong and I was trying to fight it to stop it from rolling me. If I didn’t have my fins on, I would have been screwed because they allowed me to swim a lot faster.

‘I didn’t think I was going to die because I was trying to survive and I was confused and thinking ‘oh sh*t, is this really happening?’ and trying to get it off me. I wasn’t thinking about dying.

‘I had to swim back up current with the crocodile still latched onto my head. I was holding it with my hand trying to hold it still so it didn’t shake or try to roll. The whole time it was trying to roll.

Once Joshua had battled his way to land, he managed to free his head from the crocodile’s crushing bite but the creature latched on to his hand instead.

‘When I got to shore it was on my head and I pried it off. I can’t describe how much it took for me to open its mouth.

‘I got its mouth open ever so slightly to get my head out but it clamped down on my hand and I thought ‘sh*t, this is hurting’ and if didn’t get my hand out, I was going to be screwed and lose my fingers.’

‘I pried its mouth open and pulled my fingers out and it dropped to the ground. Then it tried to latch onto the side of my body. Luckily, I had a wetsuit on but it completely tore that off and not my skin. I ran away.’

Joshua rushed to the nearest medical clinic in a taxi but says he lost consciousness on the way there and was carried in by the driver.

Medics were wary that he may have a fractured skull so the attack victim was airlifted to a hospital in Belize City where he was rushed into surgery and his heart stopped due to blood loss.

Joshua spent five nights recovering in hospital and friends set up a GoFundMe page to help pay for his medical bills. 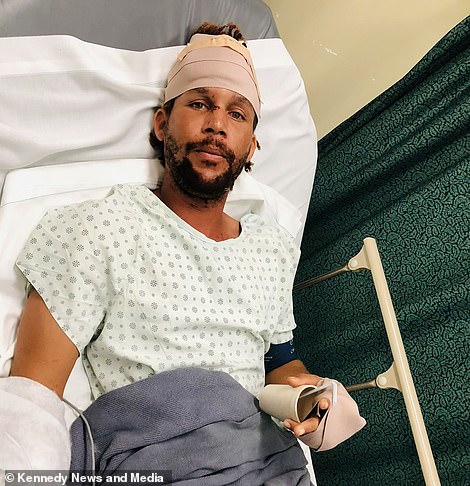 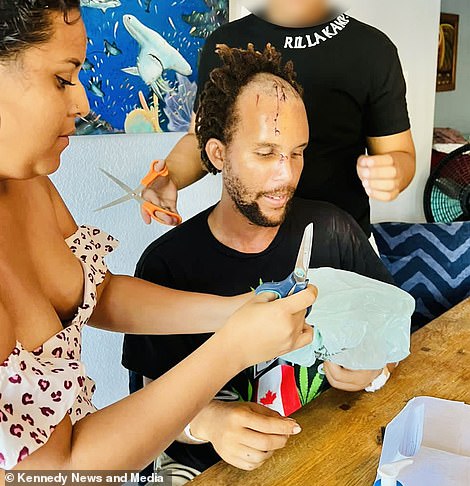 An epic underwater fight for survival ensued once the crocodile latched onto his head, with Joshua using his flippers to counteract the twisting motion of the crocodile and stop himself from being dragged into a death roll 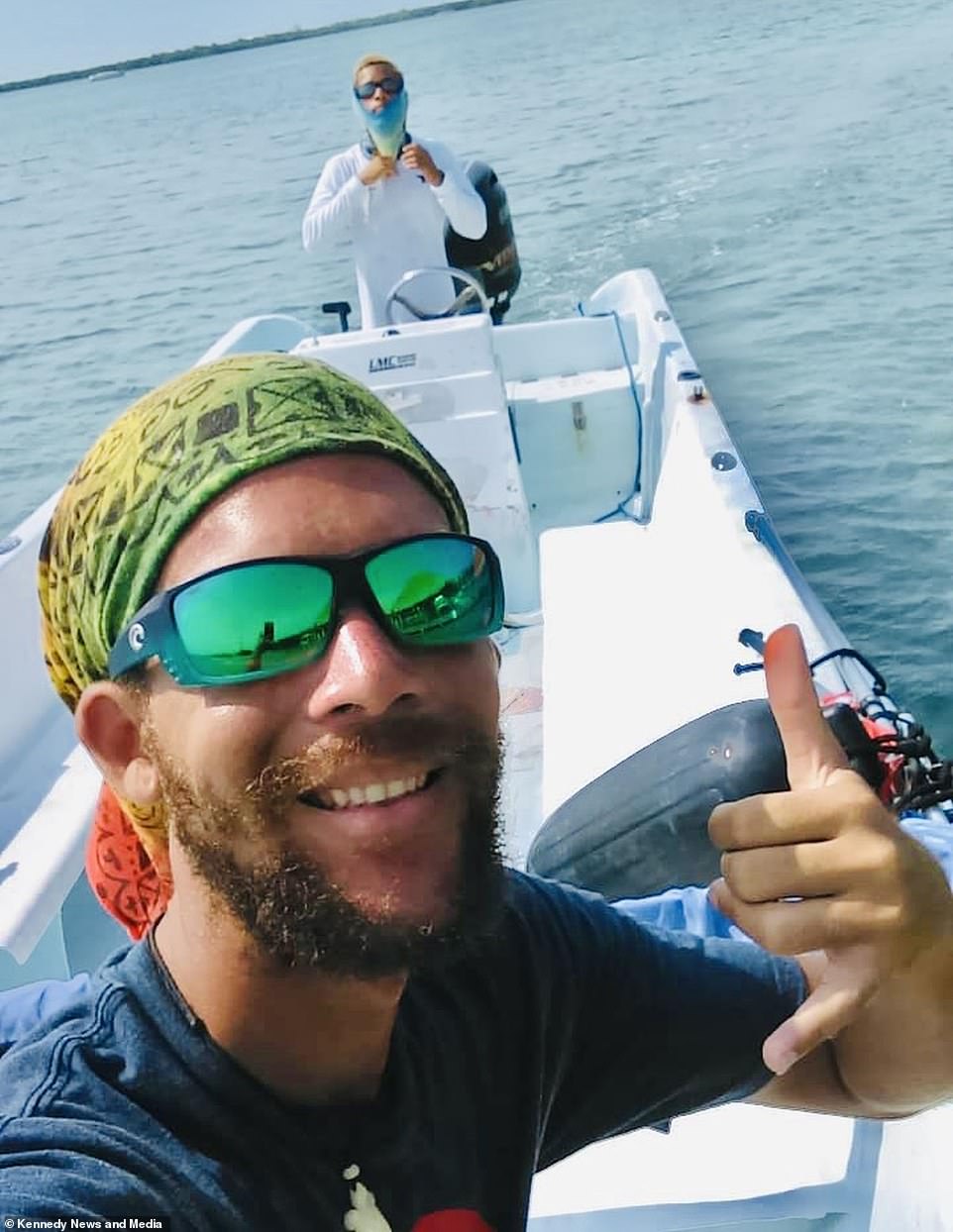 Joshua said: ‘I needed to get to a clinic because there was so much blood. I was wiping my face and it was wet with blood. I felt like every part of me was numb.

‘There was a big crowd in front of me and I was screaming at them to move. I jumped in a taxi and when I got there I fell unconscious so the taxi guy had to carry me in.

‘I completely blacked out twice and when I woke up I was in the ambulance and they were giving me a lot of adrenaline. I went into shock.

‘I had nine fractured fingers, a gnarly scar across my full head, there were bite marks and lacerations on my head. My head was absolutely opened. It was bad.

‘They didn’t want to stitch it because they didn’t know if the skull was cracked. It’d bitten straight through my nose so there was a hole and I couldn’t breathe.

‘I was so worried about medical bills because I have no cash.’

Although Joshua also works as a freelance surfing instructor, he isn’t sure if he’ll ever feel safe in the water again. He’s undergoing therapy for his hand before he goes back to work.

Joshua said: ‘I haven’t been back in the water yet so I don’t know how I would feel. I feel like I’ve had a near death experience.’

‘I never expected it to happen there. It’s where everyone goes swimming or fishing and tourists and families go there. I was very surprised because I’ve never heard of a crocodile or shark attack there.’

It is likely that Joshua was attacked by a Morelet which prefers freshwater habitats such as rivers and swamps and is found throughout the country.

Over the past ten years there have only been 12 reported crocodile attacks in Belize, of which only two were fatal.

Sea turns red with blood as dolphins are slaughtered in Taiji, Japan