Home » World News » Finding the noble through the art of hospitality

A Muslim friend once told me that, according to Islamic tradition, the patriarch Abraham never dined alone but always waited on the road to invite travellers to share his meal.

If so, Abraham, the progenitor of all three great monotheistic faiths, must have sometimes gone hungry. The land of Canaan can’t have been too busy 1900 years before Christ, unless he lived directly on a trade route, which generally he did not.

But the Bible does describe one explicit encounter, in the book of Genesis, chapter 18, when Abraham goes to the utmost to provide for three strangers who turn out to be angels. 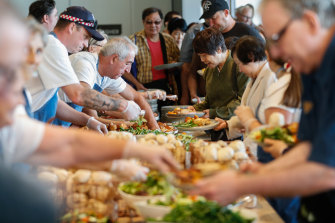 God commanded via Moses in Leviticus: “You shall treat the stranger who sojourns with you as the native among you, and you shall love him as yourself, for you were strangers in the land of Egypt.”

The Prophet Isaiah commands God’s people to share their food with the hungry, provide the poor with shelter, clothe the naked and not to turn away from their own flesh and blood.

The New Testament affirms this, referring to Abraham, in the Book of Hebrews: “Do not neglect to show hospitality to strangers, for thereby some have entertained angels unawares.” The sacred Jewish Passover meal begins “Let all who are hungry come and eat”.

Hospitality is a central tenet of Judaism, Christianity and Islam, and was endorsed by secular Enlightenment philosophers such as Immanuel Kant. In Perpetual Peace, Kant goes so far as to write of hospitality as a natural (if temporary) right we all have by virtue of our common possession of the surface of the earth.

Hospitality may have become neglected in the Western tradition – compared, say, to the Middle East – but this weekend millions of Australians have practised and received it, not just among their wider families but often for lonely friends and strangers.

I know that Christmas gatherings do not always go well, that family fissures can become open cracks under pressure. Either way, hospitality remains good, as shown by a sampler sewn in French by my great-grandmother a century ago: “Visitors always bring pleasure, either when they arrive or when they leave.” A similar thought has it that “hospitality is making your guests feel at home, even if you wish they were”.

The word translated “hospitality” from the Greek New Testament literally means “love of strangers”. And of course an ideal way to turn strangers into friends is by hospitality.

Genuine hospitality is a beautiful act that enriches both those who give and those who receive, that breaks down barriers and creates community. It is one of the most ennobling things humans can do.

The Queen 'had a secret plan for Meghan Markle and Prince Harry to live in Africa for a year', explosive book claims