FBI agents are reportedly probing whether foreign governments may have had a hand in funding the Capitol rioters.

Rival powers, foreign organizations and mysterious individuals are all being probed by the feds after $500,000 worth on bitcoin was sent to key figures in extremist groups. 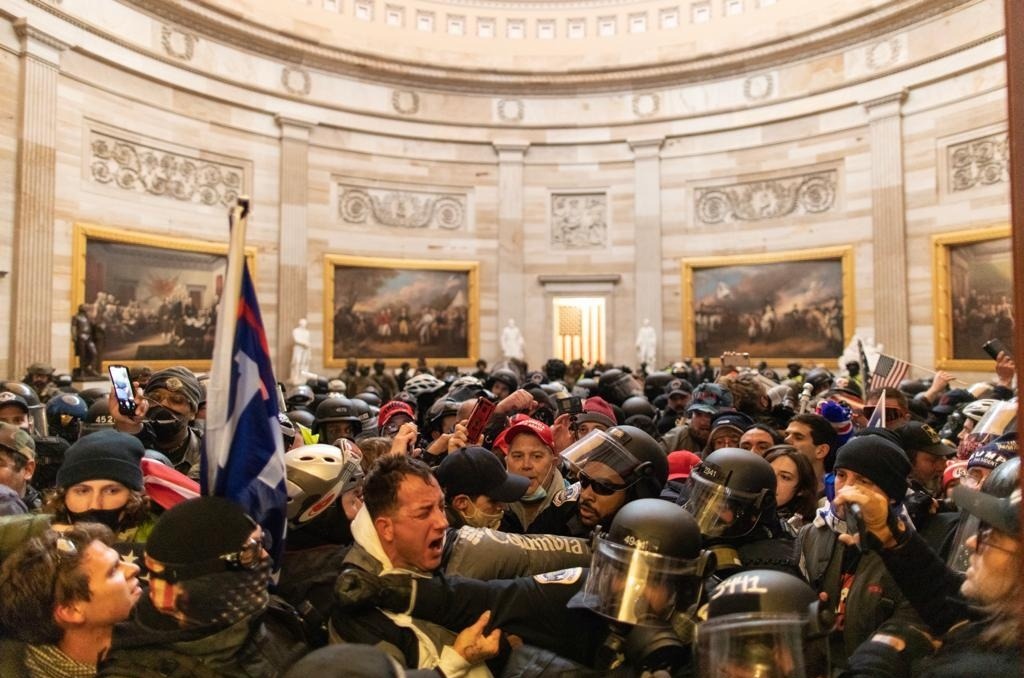 Sources told NBC News that the payments are a key part of the probe amid fears that outside influence may have played a roll in the violence on January 6.

Cops and the FBI are trying to piece together what exactly lead to the chaos as a mob of Donald Trump supporters marched on the Capitol.

Dozens of cops were injured and a nationwide manhunt for the rioters has been launched as after the violence which has been seen as an attack on democracy.

Mysterious cryptocurrency payments have prompted the FBI to launch the probe to establish if the cash was used to fund any illegal acts.

FBI officials said if the agency's fears are true it raises the possibility of money laundering and conspiracy charges.

Chainalysis reported some $522,000 worth of payments – 26.15 BTC – was sent to 22 addresses, many of which belong to far-right activists, from someone in France.

The largest went to far-right podcaster Nick Fuentes, who received bitcoin worth approximately $250,000.

Fuentes, who spoke at pro-Trump rallies last year in Michigan and Washington DC said he was at the rally on Wednesday but did not follow the mob to the Capitol, reports ProPublica.

Speaking last week, Michael Sherwin, the US attorney in DC, said: "We're looking at and treating this just like a significant international counterterrorism or counterintelligence operation. 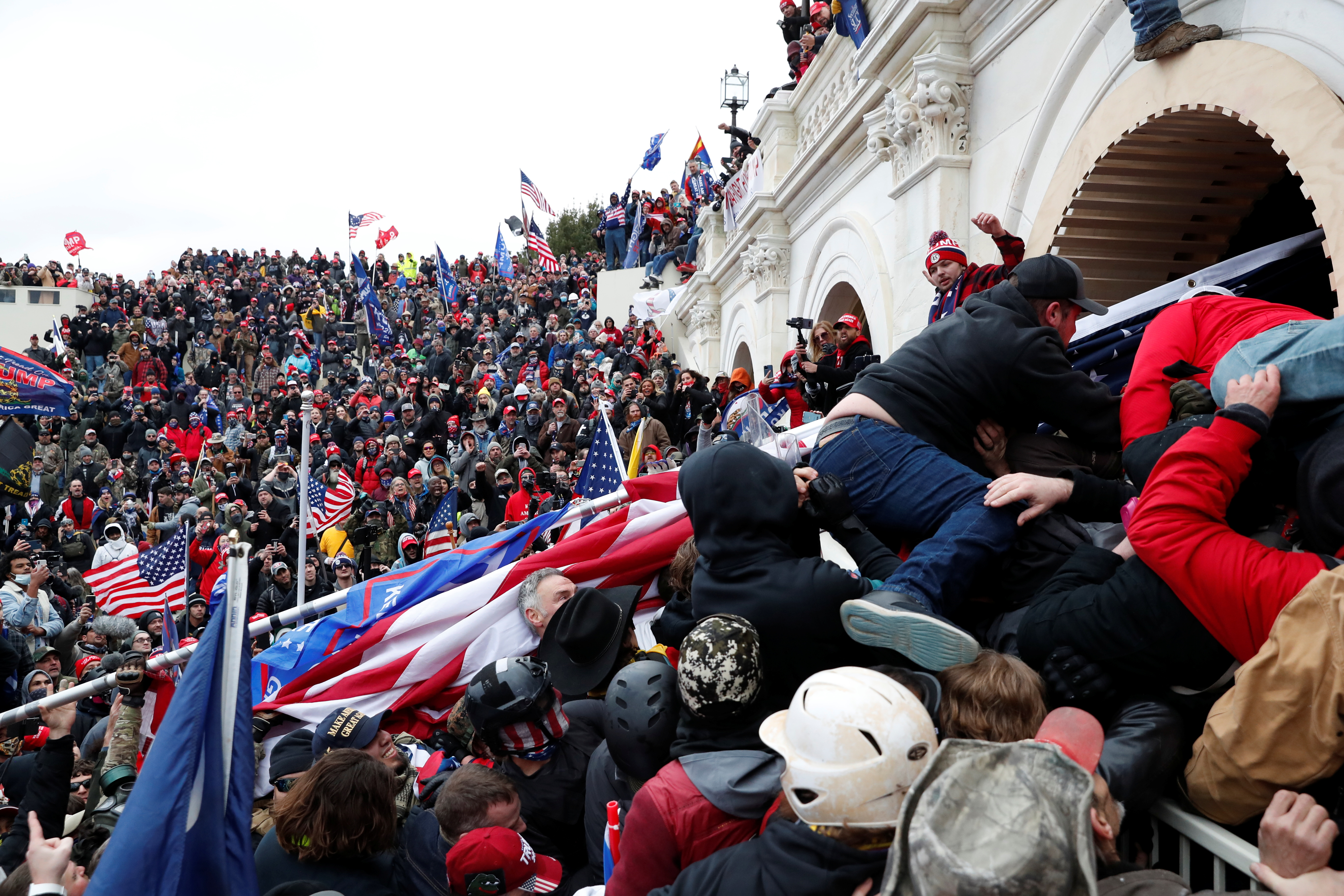 FBI, the Department of Homeland Security and various other federal and DC-area police agencies have also said that Russia, Iran and Chinese "influence actors" have seized on the riots.

The unclassified report said Russian state and proxy media outlets "have amplified themes related to the violent and chaotic nature of the Capitol Hill incident, impeachment of President Trump, and social media censorship".

"In at least one instance, a Russian proxy claimed that ANTIFA members disguised themselves as supporters of President Trump, and were responsible for storming the Capitol building," it added.

Chinese media meanwhile has celebrated the riot, and used it to rubbish US democracy and cast America as a nation "broadly in decline".

It comes after years of questions over foreign influence in the US as rival powers use online cyber campaigns to spread fake news and disinformation.

Russian, Chinese and Iranian hackers are known to have targeted the 2020 election, according to a report released last September by Microsoft. 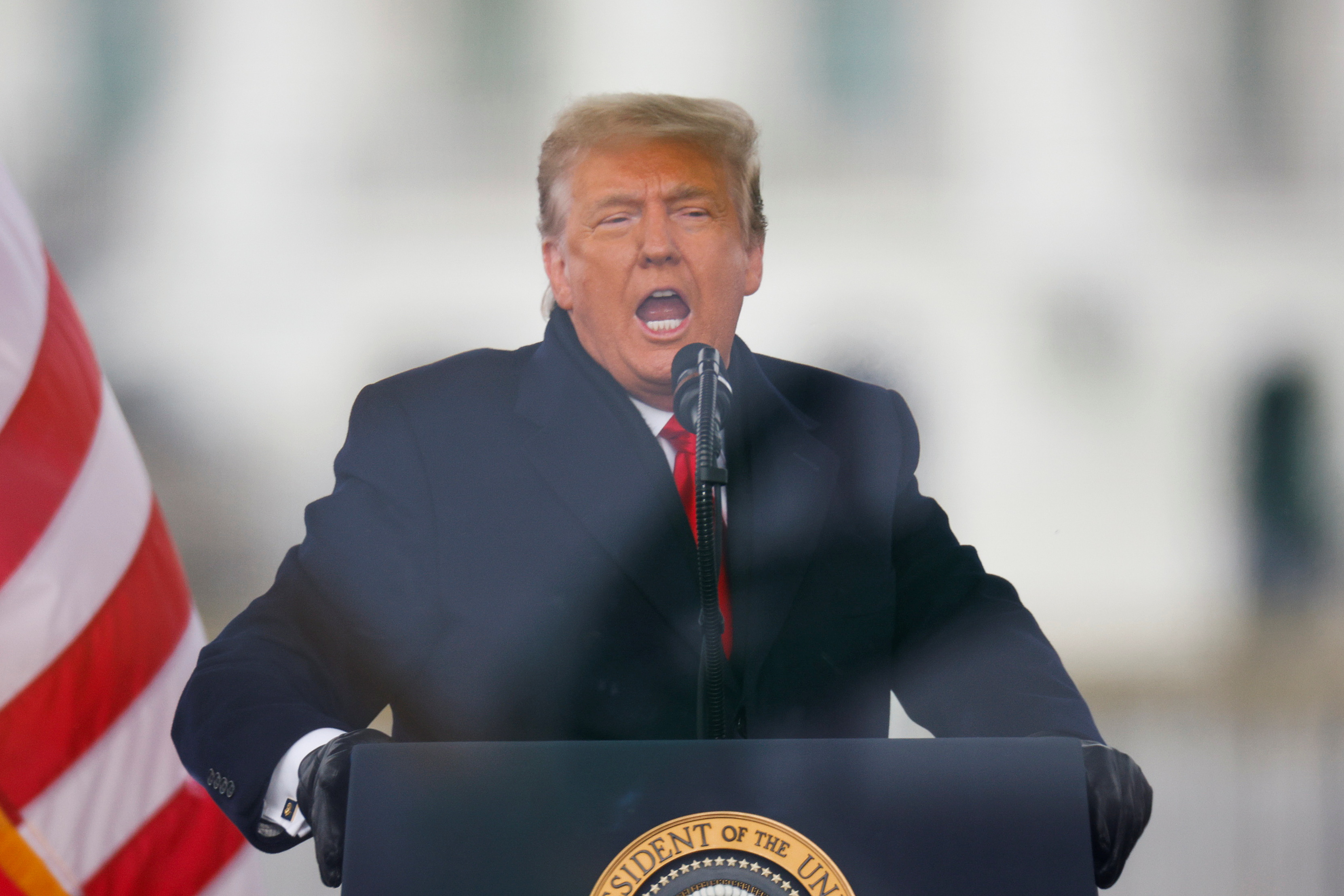 FBI intelligence has warned there remains an ongoing threat of violence ahead of Biden‘s swearing on January 20 as Washington DC has been placed on lockdown.

President Donald Trump has been accused of inciting the violence after spreading widespread false claims of electoral fraud.

The allegations landed him his second impeachment last week as 10 Republicans turned on him – making the vote the most bipartisan in history – despite his new calls for peace.

National Guard troops have been deployed to Washington DC in unprecedented numbers with the scenes being likened to a war zone.

The FBI has warned of the possibility of "armed protests" in all 50 states for Biden's inauguration – with ten deciding to also deploy the National Guard.

Several are also shutting down their Capitols as they brace for attacks for more rabid pro-Trump mobs – many of who have become convinced the Democrats "stole" the election. 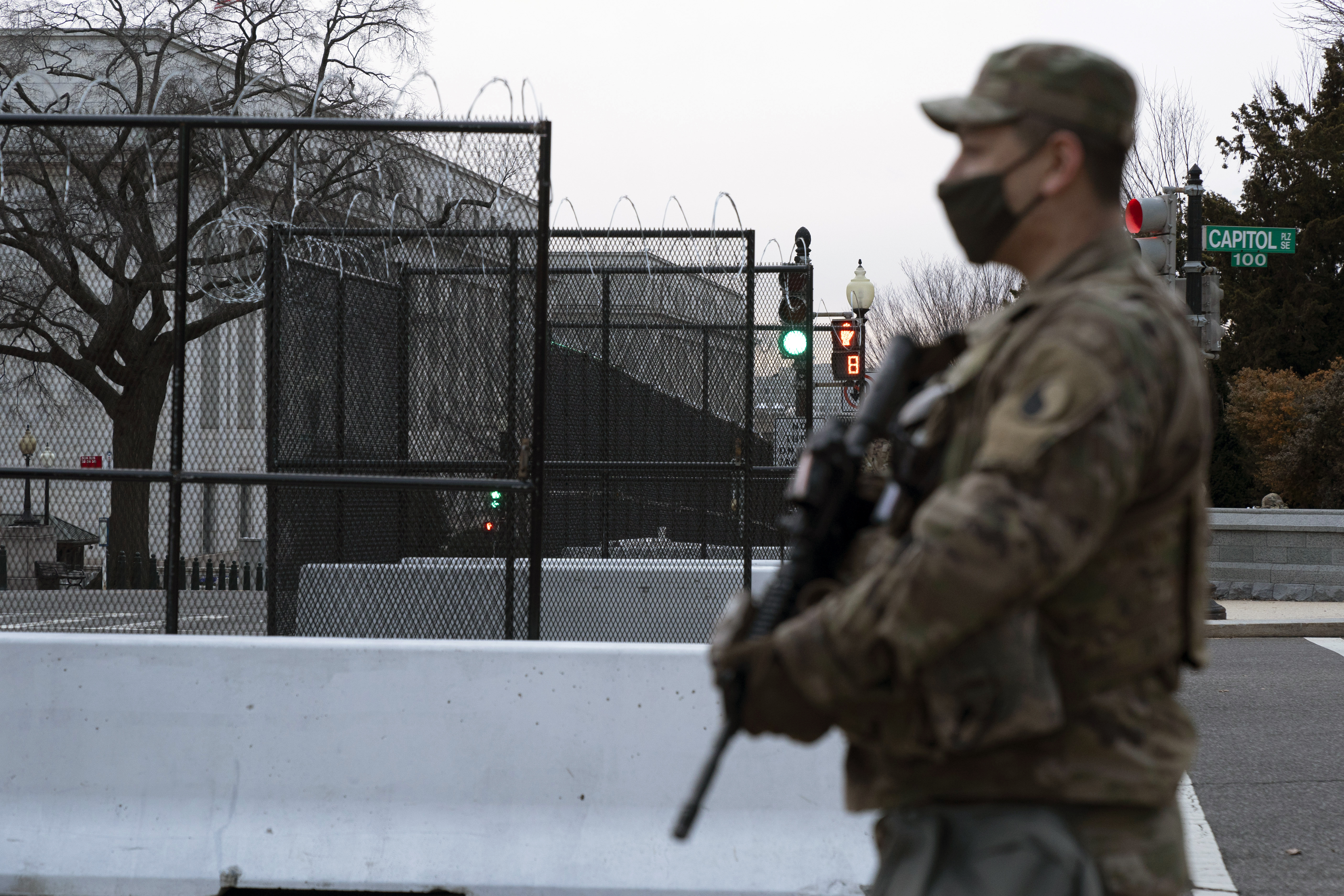 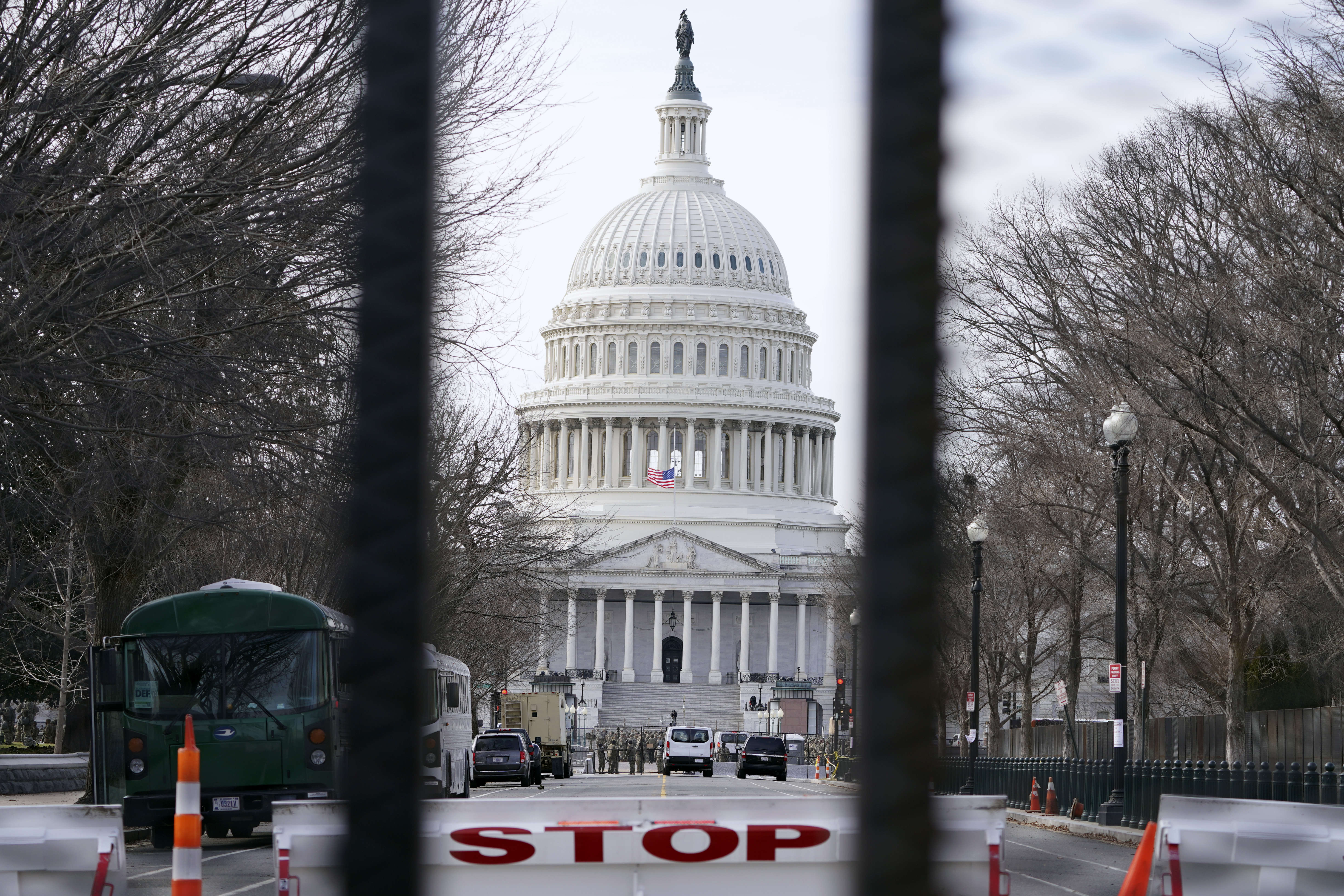 Questions are being asked about the police response and Democrats are calling for accountability from Republicans who help spread the falsehoods that led to the violence.

FBI Director Christopher Wray has said that the bureau has made more than 100 arrests so far, and that more than 200 suspects have been identified.

Trump's speech at the "Save America" rally on January 6 is believed by many to have been a catalyst for the violence as he urged his supporters to march on the Capitol.

It is feared the riot could have been much worse if lawmakers had not been evacuated, with shocking scenes such as a gallows being erected nearby and chants of "hang Mike Pence".

FBI officials are probing whether there may have been an "inside job" element of the riot as MAGA rioters navigated the maze of corridors with ease.

Democrat speaker Nancy Pelosi as warned members of Congress may face prosecution if they are found to have "aided and abetted" the mob.

Her comments came after Mikie Sherrill, a Democrat congresswoman of New Jersey, claimed she saw colleagues leading groups on “recon” tours of the Capitol.

Trump is not expected to attend the inauguration and will instead leave Washington on the morning of January 20.