Top FBI agent accused of protecting Hunter Biden from probes RESIGNS: Veteran is marched out of D.C. headquarters over claims he suppressed laptop story and was ‘politically biased’ towards President’s son

A top FBI agent accused of bias in his handling of the investigation in to Hunter Biden’s laptop has resigned from the bureau, it has emerged today.

Timothy Thibault, the FBI Assistant Special Agent in Charge of the case, reportedly retired from the bureau at the end of last week and on Friday was escorted out of the building for the last time, according to Fox News.

Thibault was one of 13 assistant special agents assigned to investigate the Hunter Biden laptop saga and was removed from the supervisory role by FBI Director Christopher Wray earlier this month after agency whistleblowers shed light on an alleged pattern of political bias from multiple high-ranking officials.

The agent was also singled out by Senate Judiciary ranking member Chuck Grassley, who on July 18 penned a letter to Wray and Attorney General Merrick Garland imploring the pair to act on allegations of political bias influencing agency operations.

‘As you are aware, Assistant Special Agent in Charge Tim Thibault is not the only politically biased FBI agent at the Washington Field Office,’ Grassley wrote, reminding Wray that ‘the FBI answers to Congress and the American people.’

Thibault’s resignation follows a flurry of damning claims about the FBI and their handling of the Hunter probe.

Republican Senator Ron Johnson sent a letter to DOJ Inspector General Michael Horowitz last week claiming the bureau deliberately dragged its feet in the investigation and told agents not to look at the laptop.

‘Recently, my office heard from individuals with knowledge of the FBI’s apparent corruption,’ Johnson said. 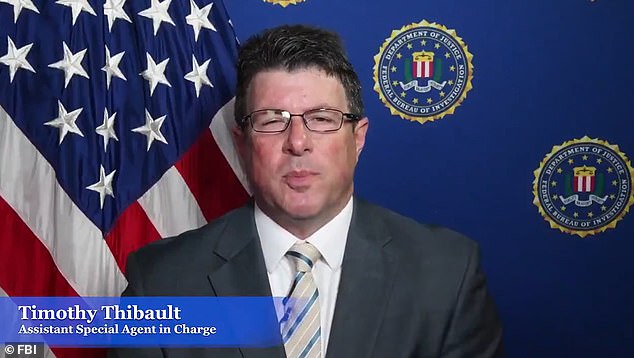 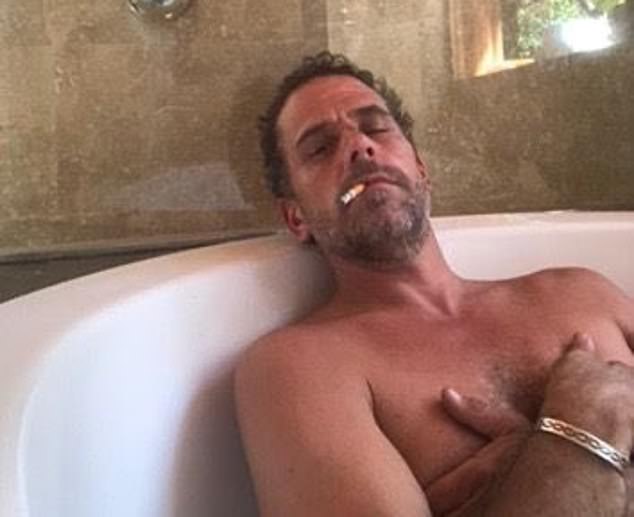 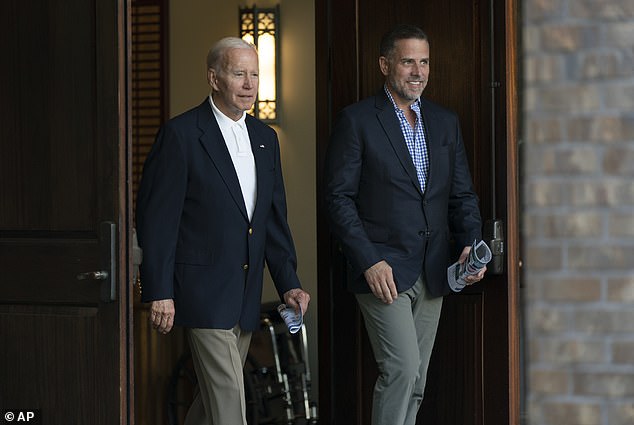 President Joe Biden (left) and Hunter Biden (right) leaving church in South Carolina earlier this month. The  White House has generally avoided discussing the laptop story and investigation and has deferred to the Department of Justice when asked

Senate Republicans Chuck Grassley and Ron Johnson have written a letter to Facebook demanding they hand over any communications they had with the FBI and the DOJ regarding Hunter Biden’s laptop and business dealings.

The letter, addressed to Mark Zuckerberg, also requests names of FBI and DOJ officials who told the social media behemoth that a document dump ahead of the 2020 election was ‘Russian disinformation.’

That warning allegedly pushed Facebook to censor and shut down reports regarding the laptop in the New York Post.

Johnson and Grassley write: ‘The American people deserve to know whether the FBI used Facebook as part of their alleged plan to discredit information about Hunter Biden.’

Grassley said he would continue investigating Hunter Biden and wanted to root out ‘political bias’ within the FBI, during a gathering with Iowa Republicans on Sunday.

They added: ‘If so, Congress and the American people require clarity with respect to the extent the FBI communicated with Facebook during the 2020 election about Hunter Biden-related information.’

‘After the FBI obtained the Hunter Biden laptop from the Wilmington, DE computer shop, these whistleblowers stated that local FBI leadership told employees, “you will not look at that Hunter Biden laptop” and that the FBI is “not going to change the outcome of the election again,”‘ Johnson wrote to Horowitz.

‘While I understand your hesitation to investigate a matter that may be related to an ongoing investigation, it is clear to me based on numerous credible whistleblower disclosures that the FBI cannot be trusted with the handling of Hunter Biden’s laptop,’ Johnson said.

‘I hope you understand that the longer your office stands on the sidelines and delays investigating the FBI’s actions, the harder it will be for you to uncover the truth and hold individuals accountable for wrongdoing.’

Horowitz told Johnson in February 2021 that the OIG would not investigate the FBI’s handling of the laptop so as not to interfere with the Department of Justice’s investigation into Hunter’s tax affairs.

In October 2020, one month before the election, ‘an avenue of derogatory Hunter Biden reporting was ordered closed’ by Thibault, Senator Grassley claimed in a letter to Wray and Garland.

Thibault shut down the investigation despite evidence that some of the details were true, according to that whistleblower.

‘Allegations provided to my office appear to indicate that there was a scheme in place among certain FBI officials to undermine derogatory information connected to Hunter Biden by falsely suggesting it was disinformation,’ Grassley wrote.

Earlier this month FBI director Christopher Wray, testified that he found allegations the FBI mishandled the laptop to be ‘deeply troubling.’

Meanwhile, the Department of Justice probe in Delaware has intensified in recent weeks over whether to bring charges on tax violations or making false statements on purchasing a gun, sources told CNN.

Hunter would have been prohibited from buying a gun at the time because of his well-documented struggles with drug addiction.

He revealed after the 2020 election that he was being investigated on tax issues but denied any wrongdoing.

FROM A DELAWARE REPAIR SHOP TO GLOBAL HEADLINES: THE HUNTER BIDEN LAPTOP SCANDAL

April 15, 2019: Mac Isaac called Hunter to drop off a drive related to the recovery efforts.

April 16, 2019: Hunter dropped off the drive and requested Mac Isaac bill him thru Square when complete the next day. This was the last time he ever heard or saw Hunter.

April 17, 2019: The job was completed and bill sent and called for collection.

September 3, 2019: Mac Isaac spoke to his father about concerns related to the contents of the laptop and decided to approach the FBI in New Mexico.

September 20, 2019: While waiting for a copy of the hard drive to arrive that he sent to my father, the Wall Street Journal ran a story about a whistleblower involving a Ukrainian phone call.

October 9, 2019: Mac Isaac’s father approached the FBI in Albuquerque, New Mexico with a copy of Hunter’s hard drive. The FBI refused the drive, claiming it was not a federal issue. He claimed the FBI told his father to get a lawyer and leave the FBI field office.

November 19, 2019: Two FBI agents visited Mac Isaac at his home. He presented Agents Joshua and Mike with document he thought were relevant to the impeachment trial. He claimed the agents refused to look at anything and again refused to take the laptop for evaluation, claiming they needed to run it by their legal team.

December 2, 2019: Agent Joshua calls Mac Isaac to says he want to come to the shop with an FBI tech guy and make a clone of the hard drive.

December 9, 2019: Agents Joshua and Mike arrive at the shop with a subpoena to collect Hunter’s back up drive, along with the laptop and any related paperwork for the repair job.

January 16, 2020: Impeachment trial starts against Trump. There was no mention of Hunter’s laptop. Mac Isaac said this is when he knew for sure the FBI cared more about protecting the Bidens than protecting the then-president or the small town shop owner.

Late February thru August 2020: Mac Isaac’s uncle and father, both retired Col. in the Air Force, knocked on the doors of several members of Congress and White House staffers but got no response.

August 26, 2020: Mac Isaac sent an email to the office of Trump’s lawyer at the time, Rudy Giuliani, detailing efforts to get the contents of the drive to the correct authorities.

August 27, 2020: Giuliani’s lawyer, Bob Costello, sent a response to Mac Isaac and the two spoke on the phone. It ended in the decision to overnight send a copy of the drive to Giuliani’s office.

September 24, 2020: Mac Isaac sent a letter to Senator Johnson’s office thru their whistle blower link and explained the situation related to the laptop hard drive.

September 25, 2020: Johnson’s office responded. They asking for more information, including if Mac Isaac is a U.S. citizen, who the agents were who collected Hunter’s equipment and whether he had legal counsel.

October 11, 2020: A reporter from the New York Post tracked Mac Isaac down to confirm he had a copy of Hunter’s laptop. The computer repairman called Bob Costello and asked how his identity was leak to the press, but was assured it was normal before a story broke to be leaked. He was also told his name would be left out of the reporting.

October 14, 2020: The New York Post broke the initial story at 6:30 a.m. about Hunter’s laptop. Mac Isaac’s inbox started blowing up a couple minutes later and by 9:30 a.m., Twitter, Facebook and Google blocked or repressed the story.

A look at the $500,000 Richard Mille watch stolen in Beverly Hills shooting