Manila: Philippine police killed three detained Muslim militants linked to the Islamic State group after they staged a jail rampage on Sunday that saw a police officer stabbed and a former opposition senator briefly held hostage in a failed escape attempt from the maximum-security facility in the police headquarters in the capital, police said.

National police chief General Rodolfo Azurin jnr said former senator Leila de Lima was unhurt and taken to a hospital for a checkup following the brazen escape and hostage-taking attempt at the detention centre for prominent inmates at the main police camp in Metropolitan Manila. 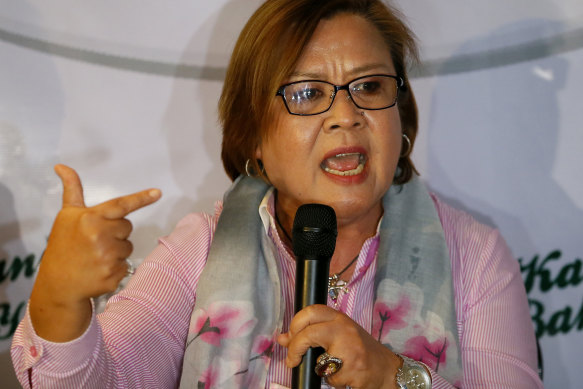 One of the three inmates stabbed a police officer who was delivering breakfast after dawn in an open area, where inmates could exercise outdoors. A police officer in a sentry tower fired warning shots, and then shot and killed two of the prisoners, including Abu Sayyaf commander Idang Susukan, when they refused to yield, police said.

The third inmate ran to de Lima’s cell and briefly held her hostage, but he was also gunned down by police commandos, Azurin said.

“She’s safe. We were able to quickly resolve the incident inside the custodial centre,” Azurin told reporters.

Susukan, who had been blamed for dozens of killings and beheadings of hostages, including foreign tourists, and other terrorist attacks was arrested two years ago in southern Davao city. 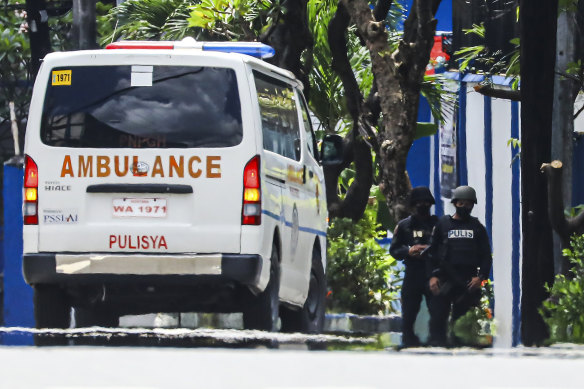 An ambulance at the PNP Custodial Compound on Sunday October 9, 2022, where police killed three inmates, including a top Abu Sayyaf militant.Credit:AP

The other two inmates, Arnel Cabintoy and Feliciano Sulayao jnr, were suspected members of the Dawlah Islamiyah, a Muslim militant group that has been linked to bombings and other deadly attacks in the country’s south. They were arrested in 2019 in suburban Quezon city in the capital region, and were facing non-bailable charges along with Susukan, police officials said.

Many militants belonging to Abu Sayyaf, which the United States and the Philippines consider to be a terrorist organisation, and the Dawlah Islamiyah have aligned themselves with the Islamic State group.

The police officer who was stabbed with an improvised knife was in serious condition at a hospital, Azurin said. Another inmate was injured in the rampage.

Interior Secretary Benhur Abalos said the three slain inmates staged the rampage in an attempt to escape and did not specifically target de Lima.

After the two militants were shot and killed, the third inmate ran and took de Lima hostage in her cell. The inmate demanded a helicopter for him to escape before he was shot and killed, Abalos said.

De Lima has been detained since 2017 and has been facing a trial for drug charges she says were fabricated by former President Rodrigo Duterte and his officials in an attempt to muzzle her criticism of his deadly crackdown on illegal drugs, which has left thousands of mostly petty suspects dead and sparked an International Criminal Court investigation as a possible crime against humanity.

Duterte, who has insisted on de Lima’s guilt, stepped down from office on June 30 at the end of his turbulent six-year term and was succeeded by Ferdinand Marcos jnr, the son of a former dictator who was ousted in a 1986 pro-democracy uprising.

In a court-authorised interview with The Associated Press in the jail compound in March, de Lima appeared undaunted by her yearslong detention in the facility, which is ringed by a maze of high concrete walls and topped by rusty barbed wire and sentry towers. Jail guards armed with assault rifles constantly roamed and kept watch.

“I’m a fighter,” the bespectacled former human rights commission chief and justice secretary said. “It’s tough, but I can manage.”

De Lima’s yearslong detention has sparked calls for her immediate release from the European Union Parliament, some US legislators and UN human rights experts and international watchdogs.

Who is Cecily Aguilar, one of the suspects in the Fort Hood disappearance of Vanessa Guillen? – The Sun