An easyJet passenger is battling for compensation after his trolley bag was left ‘crushed and mangled’ on a flight back to Gatwick.

David Benjamin, 63, was horrified when his smashed up case turned up on the luggage reclaim carousel with a huge hole ripped in the front.

Several items of clothing were left torn while other contents were wrecked by ‘exploding’ bottles and sprays in his toiletries bag which had split open.

The badly damaged items included a brand new Ted Baker suit, shirt and blue Nubuck shoes worth around £350 which he had been wearing at a wedding in the south of France.

Mr Benjamin of Staplehurst, Kent, now claims he has been ‘left in limbo’ after submitting an online claim for compensation, and not knowing whether the budget airline is going to pay up.

He is frustrated that he has been unable to speak to anyone from easyJet, leaving him unclear whether the airline is liable just for the damage to his case or its contents as well. 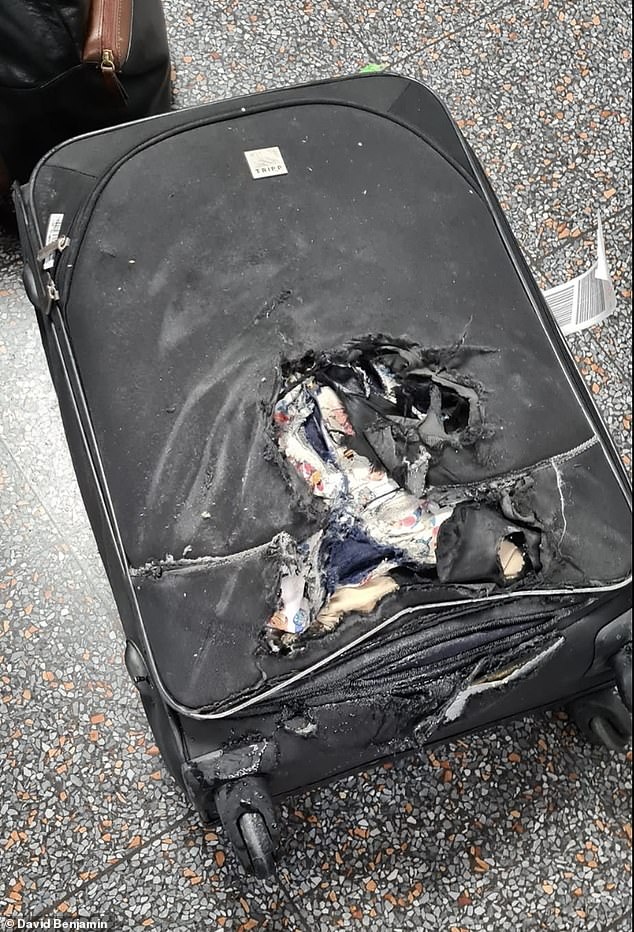 David Benjamin, 63, was stunned to find his trolley bag (pictured) and many of its contents had been ruined, after flying from Nice to Gatwick, due to ‘exploding bottles’

The torn condition of Mr Benjamin’s items (pictured: a pair of cargo shorts) in his suitcase indicate it was quite a forceful event 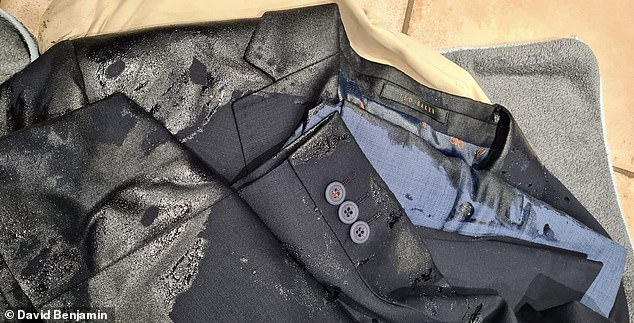 The bag was damaged on a flight back from Nice as he returned home on Sunday evening with his partner Cathy Underwood after attending her niece’s wedding.

He said: ‘I was very relieved that everything had gone very smoothly after all the reports of recent chaos at airports with long queues and flights cancelled.

‘We had only been away since Thursday, so we just had one case in the hold between us, and we were waiting for it to appear on the carousel.

‘But after about ten minutes, the carousel stopped. There were still about six people waiting for their luggage, as well as us.

‘One girl went off thinking she had lost her luggage, but we waited about 15 or 20 minutes until the carousel finally started again.

‘I spotted our case on its front and grabbed it, and went to put it on its wheels, but it fell over. It did the same thing again when I tried to stand it up a second time.

‘Then I saw it had been torn and ripped open. The whole thing had been crushed and mangled.

‘I have been an experienced traveller for many years, and I could not believe the state of it.’ 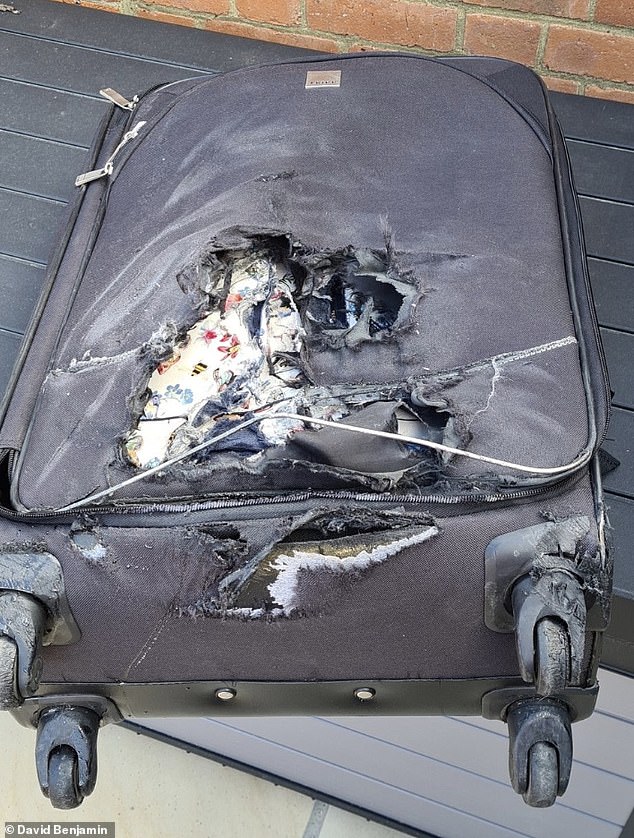 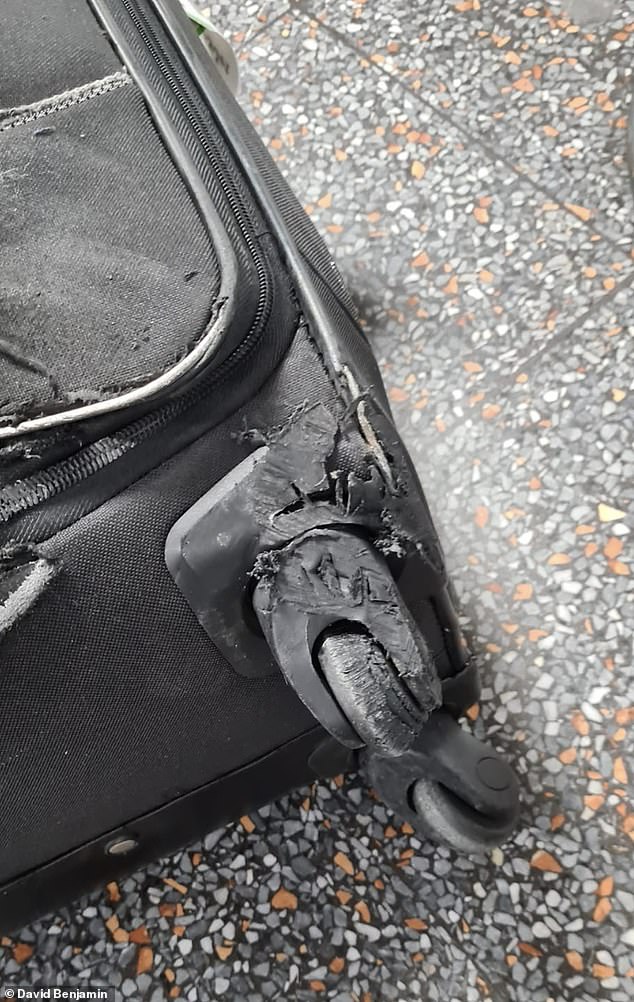 Mr Benjamin, an artwork and production manager, said a pair of cargo shorts at the top of his case bore the brunt of the damage and were ‘completely ripped up’.

He added: ‘It looks like it was dropped and potentially run over, because the contents were completely crushed. It was like someone had put a drill inside it.

‘The wash bag contents including sun cream, shampoo, and mosquito spray were crushed so they literally exploded and covered everything.

‘There was also a metal drink bottle containing a concentrated drink which was crushed and covered everything.

‘We were going to buy some wine to bring home as well so it is a good job that we didn’t, otherwise it would have been even worse.

‘My new suit jacket got torn as well as being badly damaged by the liquids which leaked. The shoes were covered in liquid as well, so I will never be able to wear them again.’

Mr Benjamin said he tried to complain to staff in the baggage reclaim hall, but was directed to an easyJet sign with a QR code to report damaged luggage online.

He returned to the easyJet check in zone in the Gatwick departures area, but apologetic staff said they were unable to do anything other than give him a copy of the online form.

Mr Benjamin filled in the form late on Sunday night, but has since been unable to check on the progress of his claim.

He said: ‘The biggest frustration is that you cannot speak to anyone.

‘All I have been told is that they will be in touch within the next ten days. 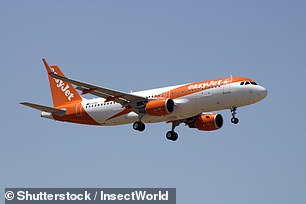 ‘The form I filled in just asked about the details of my case and the damage caused to it, and did not allow me to state the damage to the contents.

‘So, that makes me think that easyJet do not cover the contents, but I got no message back to say that it was even being looked at.

‘I have been in touch with my insurer and they need to see in writing what easyJet are prepared to cover before they consider my claim.

‘I have a friend who works at Heathrow and he could not believe the state of the bag when I showed it to him. He had never seen anything like it before.

‘My complete wedding outfit was wrecked, but luckily I still have the receipts because it was all brand new.’

Who is Joel Souza and how is he doing?