Brasilia: The spread of coronavirus in Brazil could be about to slow, the Health Ministry said, amid reports the transmission rate has fallen below the key level in several states and early signs of a gradual decline in the weekly totals of cases and fatalities.

The cautious optimism comes despite figures again showing a steady rise in the overall number of confirmed cases and death toll on Wednesday, cementing Brazil's status as the world's second biggest COVID-19 hot spot after the United States.

Most states are showing a decline in the rate of infection but three still have rising cases — Amazonas, Bahia and the Federal Capital territory, home to Brasilia and the national government. 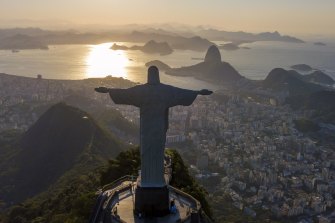 An aerial view of the statue of Christ the Redeemer in Rio de Janeiro, Brazil. After five months closed, Rio tourist spots have reopened to the public. Credit:Getty Images

A study by Imperial College London, meanwhile, showed that for the first time since April, Brazil this week registered a transmission rate below 1, according to Brazilian media reports. A so-called R-rate below 1 indicates that each infected person will infect less than 1 person, thus reducing transmission.

"In a way, it is a trend. We have to see how the disease behaves in the next two weeks to see if there is a significant drop," Arnaldo Medeiros, secretary of Health Surveillance, said.

He stressed, however, that the apparent slowdown was no reason to ease up on preventive measures such as wearing masks and social distancing.

Later on Wednesday, official ministry figures showed 49,298 new coronavirus cases and 1212 deaths from the disease caused by the virus in the previous 24 hours.

Brazil has now registered 3,456,652 cases since the pandemic began, while the official death toll from has risen to 111,100, according to ministry data.

Wales will stay SHUT to tourists for most of the summer