This is the heart-stopping moment a driver leapt out of his car moments before a moving train hit it as it passed through a crossing in Belgrade, Serbia.

The man, 35, walked up to the rails to check for incoming trains and got back into the car when he was satisfied there was no danger.

Only moments later he sprung out as a cargo train darted across the rails.

The terrifying footage was caught by CCTV cameras at the Belgrade–Bar railway in the Vreoci district on October 4.

In the video, the man drives up the crossing in a silver SUV just as the safety barrier comes down.

Not even a minute passed before the man got out, walked over to the rails, and looked left and right to check it would be safe for him to pass.

After only seconds of deliberation, he got back into the car and went to make his way across the rails by swerving around the barrier.

A blue cargo train suddenly appeared on his right and the man sprinted out of the car in a panic as it pummeled through the SUV’s front bumper and damaged the bonnet.

As the accident unfolded, a white car branded by Serbian cable company Supernova drove up behind the impatient motorist. 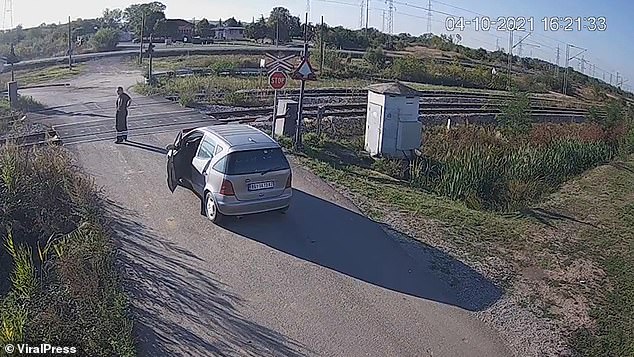 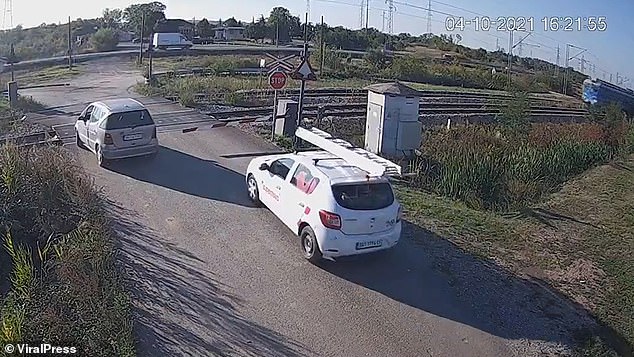 It reversed and parked over on the road verge.

Two men got out to help the driver and assisted by pushing his SUV, with him inside it, away from the main road.

Officials from the Serbian Railways Infrastructure said that the driver fled the scene after the collision.

However, a spokesman said: ‘Upon the arrival of the police, he returned and reported to the members of the Ministry of Internal Affairs.’