Washington: US President Donald Trump has announced he will be leaving the hospital where he has been treated for coronavirus on Tuesday morning (AEDT), urging Americans not to be afraid of COVID-19 or let it dominate their lives.

Trump's return to the White House would come three days after he was admitted to Walter Reed Medical Centre in Maryland. 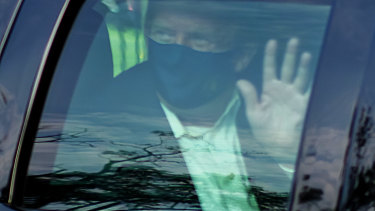 US President Donald Trump announced he was leaving the hospital where he has been treated for COVID-19. Credit:AP

Trump said in a tweet he was feeling better than he did 20 years ago, even though doctors have administered three different types of medication in recent days for his COVID symptoms and given him supplemental oxygen.

"Feeling really good! Don’t be afraid of Covid. Don’t let it dominate your life. We have developed, under the Trump Administration, some really great drugs & knowledge. I feel better than I did 20 years ago!"

Earlier in the day, White House press secretary Kayleigh McEnany and two other members of the communications staff announced they had tested positive for the virus.

Almost 210,000 Americans have died after contracting COVID-19, according to Johns Hopkins University.

At a media briefing, White House physician Sean Conley said that Trump's medical team believed he was ready to be discharged from the hospital even though he was still being treated for the virus.

"Though he may not entirely be out of the woods yet, the team and I agree that all our evaluations and most importantly his clinical status support the President's safe return home where he'll be surrounded by world-class medical care 24/7," Conley said.

Conley declined to discuss the results of Trump's chest scans, citing privacy concerns, and would not say whether Trump had suffered pneumonia.

He again declined to say when Trump had last returned a negative coronavirus test.

But Conley said Trump had not suffered any side effects – such as mental fogginess – from the medications he has received.

After being given an experimental antibody cocktail last week, Trump's doctors have given him the anti-viral medication remdesivir and the steroid dexamethasone.

Trump campaign spokesman Tim Murtaugh said that Trump expected to participate in the next presidential debate with Democratic nominee Joe Biden on October 15.

In an interview on Fox News Erin Perrine, the deputy director of White House communications, said Trump's experience with the virus gave him an advantage over Democratic rival Joe Biden.

"He has experience now fighting the coronavirus as an individual," Perrine said. "Those firsthand experiences, Joe Biden, he doesn’t have those."

In a speech in Miami Biden said: “Now that he’s busy tweeting campaign messages, I would ask [Trump] to do this: listen to the scientists. Support masks. Support a mask mandate nationwide. Require a mask in every federal building and facility."

Our weekly newsletter will deliver expert analysis of the race to the White House from our US correspondent Matthew Knott. Sign up for The Sydney Morning Herald‘s newsletter here, The Age‘s here, Brisbane Times‘ here and WAtoday‘s here.

Biden as Trump won't commit to transition: 'What country are we in?'