US President Donald Trump has reignited his war of words with Sadiq Khan calling him "incompetent" and claiming London "will never have safe streets" while he is Mayor.

In a fresh attack he suggested Mr Khan was to blame for the hacking of the Metropolitan Police's Twitter account. 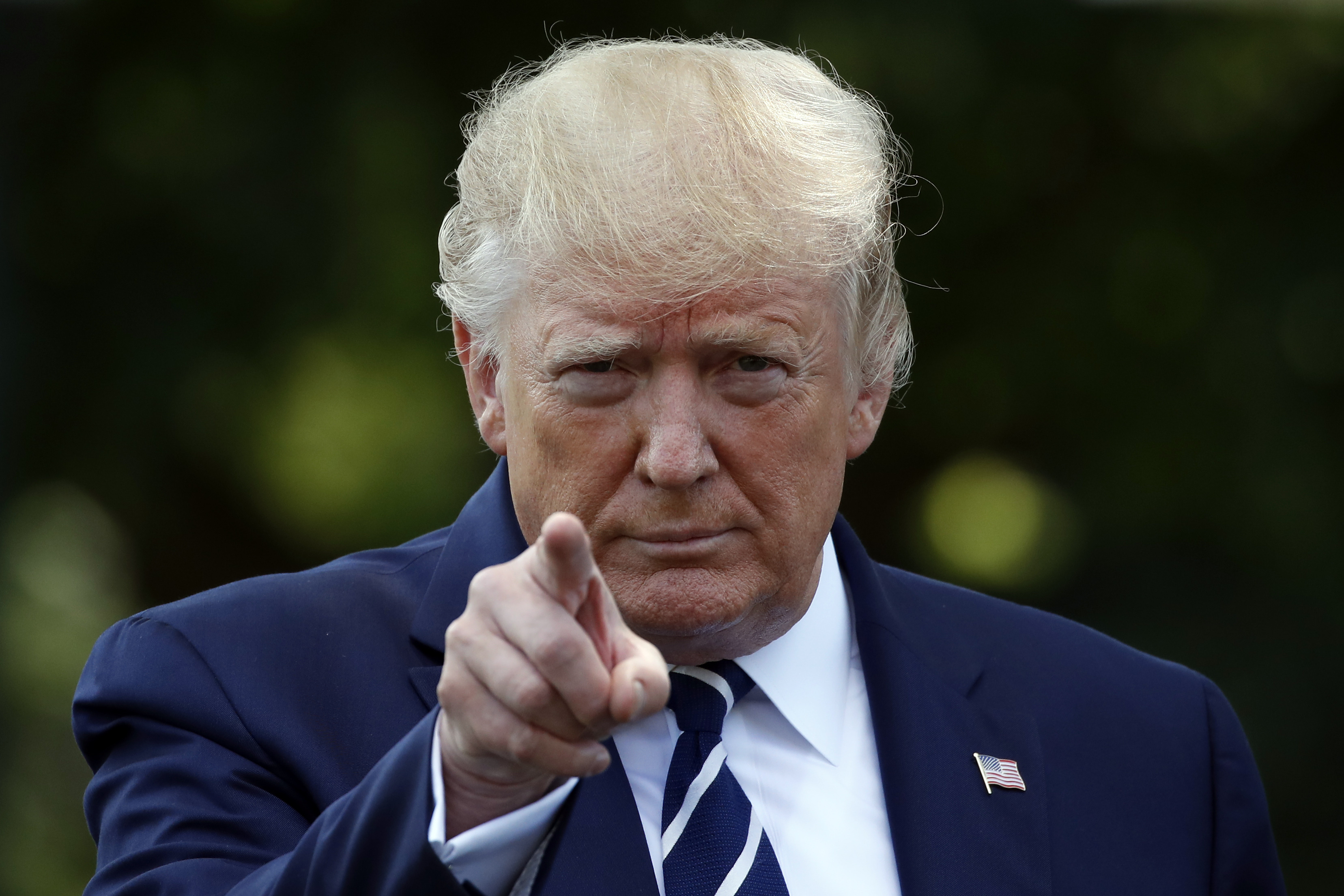 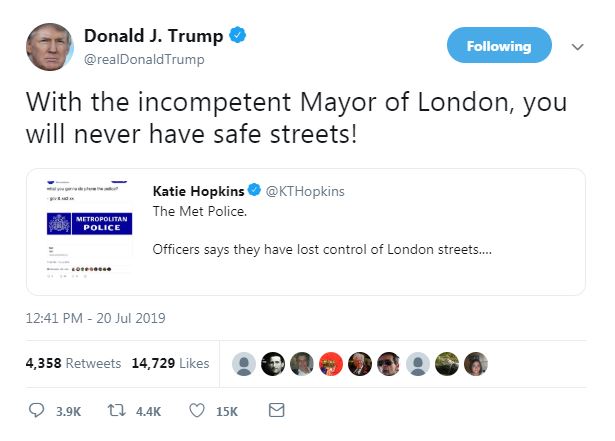 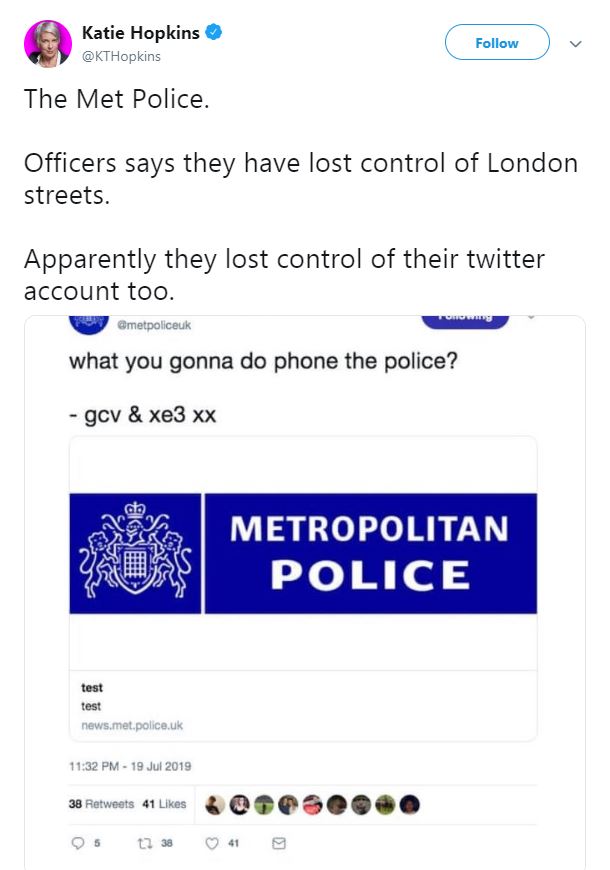 Scotland Yard's website was targeted last night by hackers who posted a series of bizarre tweets from the force's official account.

In response to that Mr Trump tweeted: "With the incompetent Mayor of London, you will never have safe streets!"

The President also retweeted three posts from the self-titled 'biggest b*tch in Britain' who is backing him for re-election to the White House, including one where she wrote: "How I wish we had such leadership in the UK."

Mr Trump also addressed the hateful "send her back" chants directed at Somalia-born Representative Ilhan Omar at a rally last week – after the President said she and four Democratic congresswomen could "go back and help fix the totally broken and crime infested places from which they came".

He tweeted: "I did nothing to lead people on, nor was I particularly happy with their chant. Just a very big and patriotic crowd. They love the USA!"

Mr Trump and Mr Khan did not see eye-to-eye and have a feud dating back to 2015.

Last month Mr Trump retweeted another post by Ms Hopkins after three people were murdered on the streets of London in 24 hours, saying: "LONDON needs a new mayor ASAP. Khan is a disaster – will only get worse!"

Moments before Mr Trump landed in the UK for his state visit in June he called Mr Khan a "stone cold loser who should focus on crime in London".

He was angry at Mr Khan for comparing him to a fascist dictator in a newspaper.

As he came in to land, Mr Trump wrote: "Sadiq Khan, who by all accounts has done a terrible job as Mayor of London, has been foolishly 'nasty' to the visiting President of the United States, by far the most important ally of the United Kingdom.

"He is a stone cold loser who should focus on crime in London, not me.

"Kahn [sic] reminds me very much of our very dumb and incompetent Mayor of NYC, de Blasio, who has also done a terrible job – only half his height."

In response to Mr Trump's tweets, a spokesman for Mr Khan said: "This is much more serious than childish insults which should be beneath the president of the United States

"Sadiq is representing the progressive values of London and our country warning that Donald Trump is the most egregious example of growing far right threat around the globe."

The feud between the pair dates back to Mr Trump's campaign pledge in 2015 to ban Muslims from travelling to the US which Mr Khan criticised as outrageous.

In May 2016 Mr Trump challenged Mr Khan to an IQ test after the London Mayor said his views on Islam were "ignorant".

Following the London Bridge terror attack in 2017, the US president accused Mr Khan of "pathetic" behaviour.

It came after Mr Khan told Londoners there was "no reason to be alarmed" by an increased and armed police presence in the city after the atrocity.

In July last year Mr Trump said Mr Khan had "done a very bad job on terrorism" and a "bad job on crime".

The mayor said he would not rise to Donald Trump's "beastly" accusation he had done "a terrible job" following the London terror attacks.

Mr Trump's criticism came after Mr Khan allowed activists to fly a giant inflatable blimp of Trump as a crying baby in a nappy.

Violent crimes have soared in London since Mr Khan took over as mayor, with 2018 the bloodiest year in almost a decade. 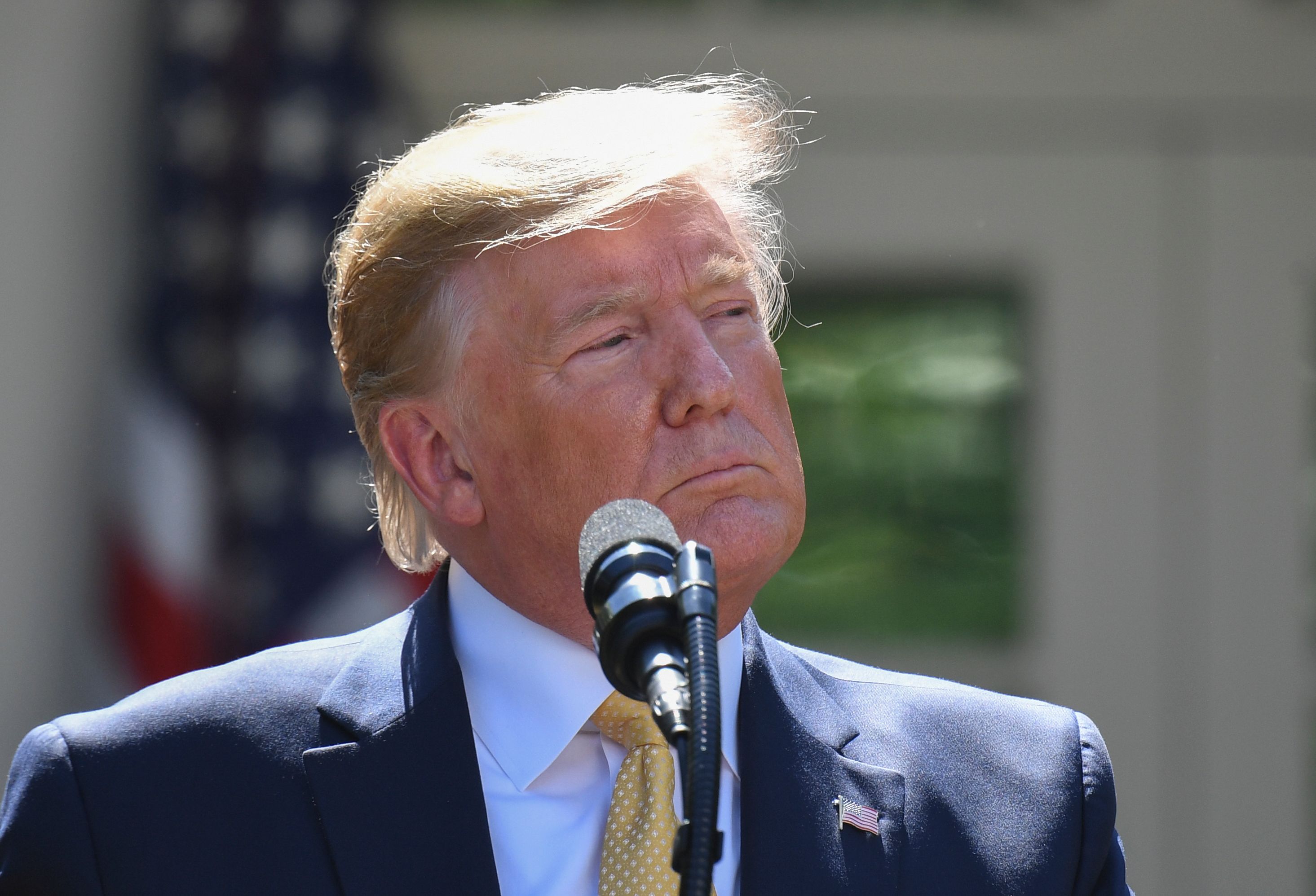 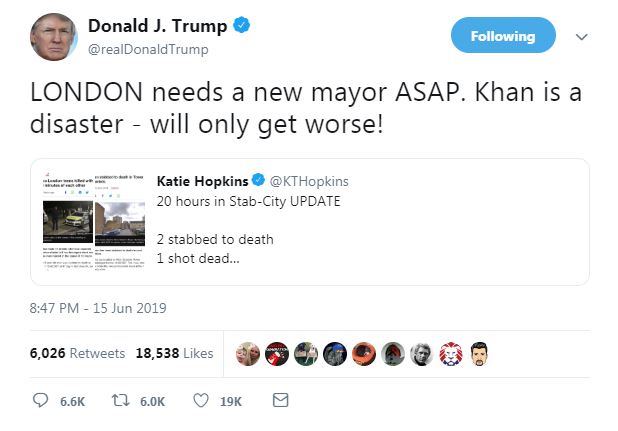 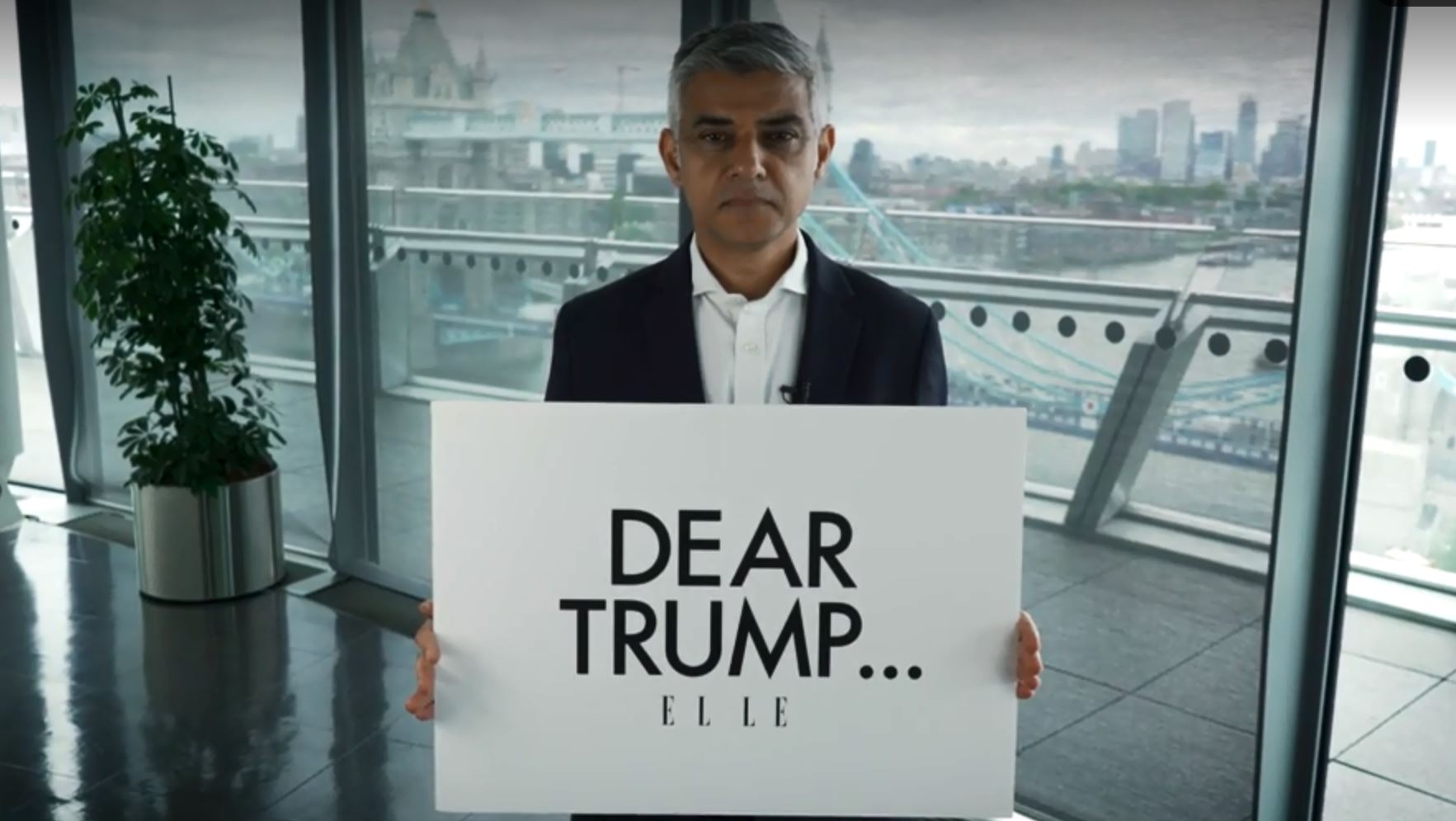 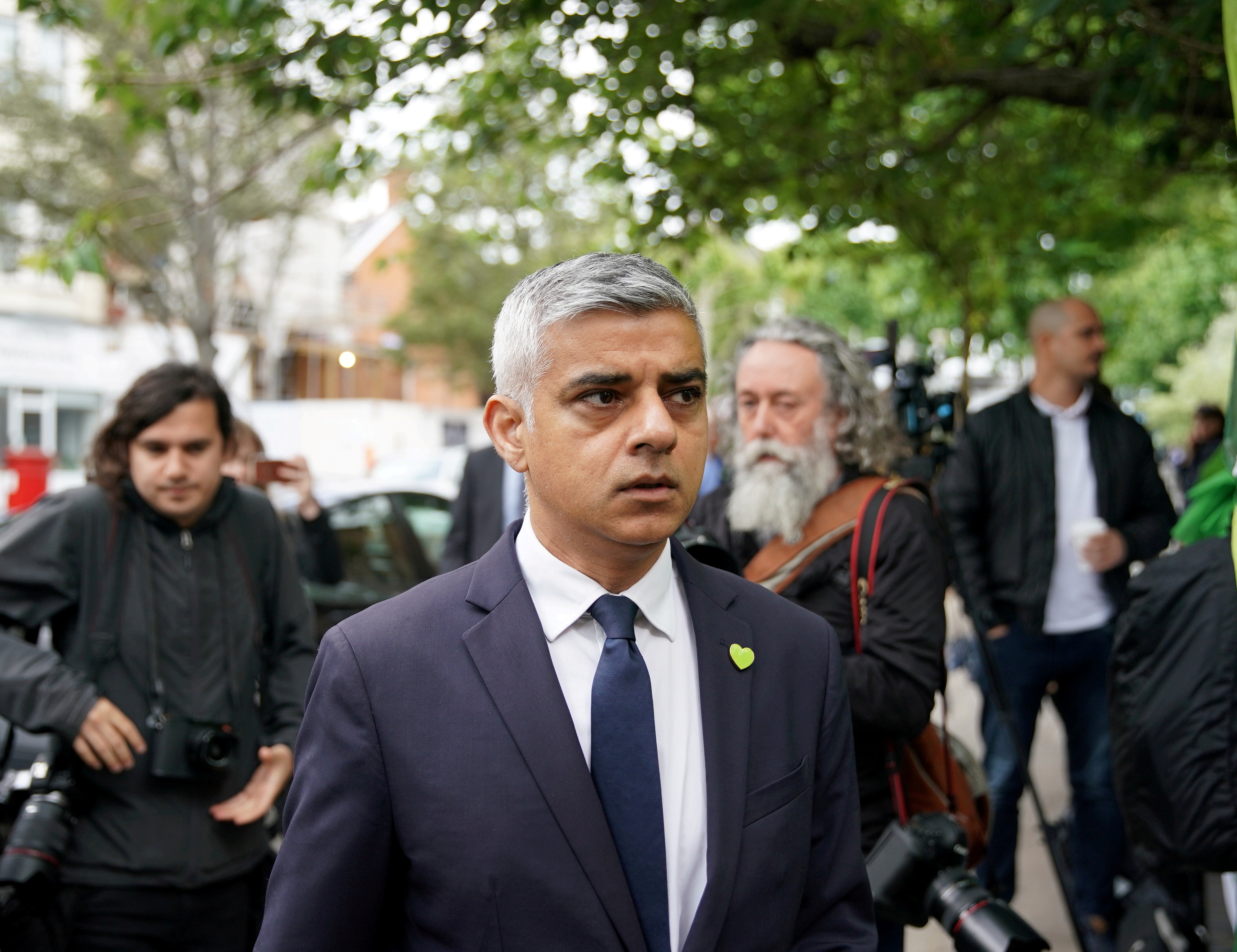