A FURIOUS dog walker has slammed a farmer in a brutal passive aggressive note in a row over keeping pets on leads.

The bizarre message to "Mr Micro Penis" was pinned to a gate and addressed to the farmer at Washlands Farm, believed to be in Sible Hedingham, Essex. 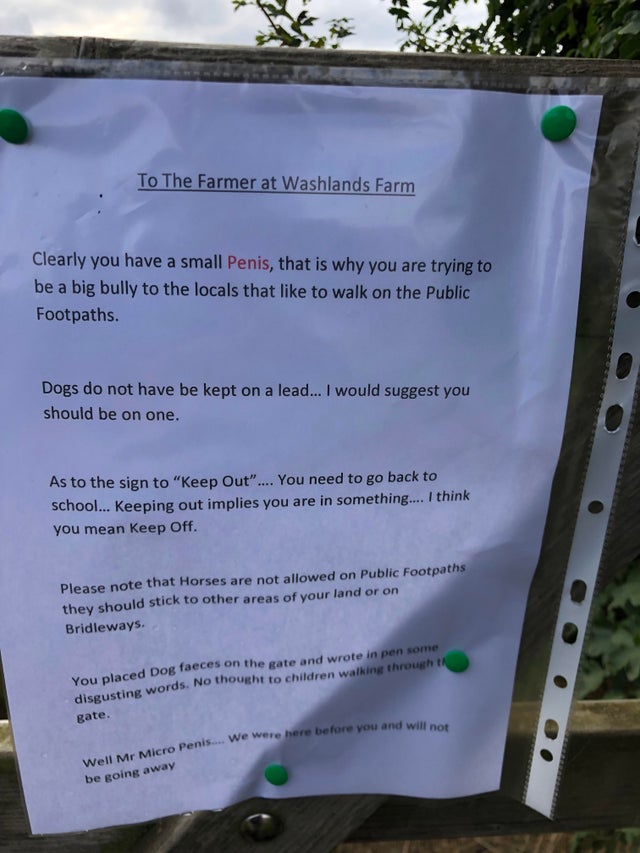 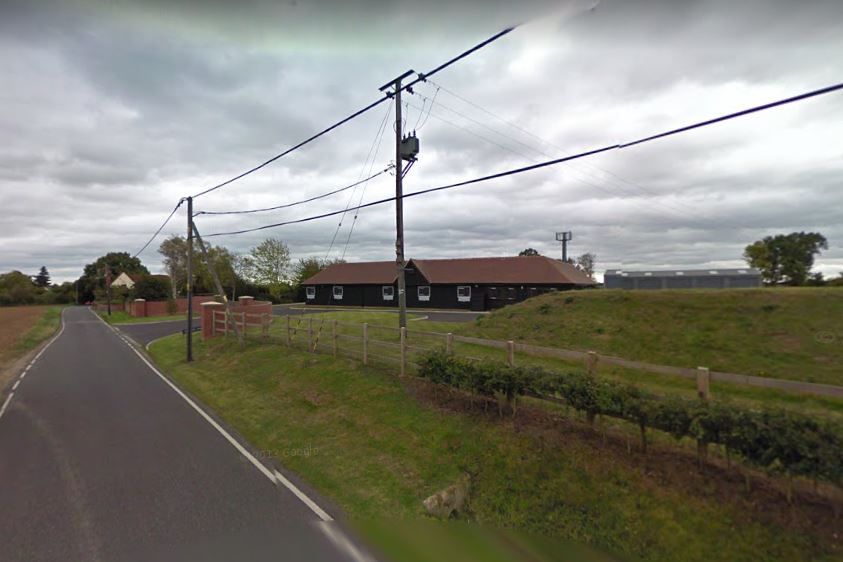 The enraged note from the dog walker had been popped in a plastic folder and fixed to the gate with two green pins.

"Clearly you have a small penis, that is why you are trying to be a big bully to the locals that like to walk on the public footpaths," it said.

"Dogs do not have to be kept on a lead… I would suggest you should be on one.

"As to the sign to 'keep out'… you need to go back to school… keeping out implies you are in something… I think you mean 'keep off'.

"You placed dog faeces on the dog and wrote in pen some disgusting words. No thought to children walking through the gate.

The defiant dog walker signed the message off: "Well Mr Micro Penis… we were here before you and will not be going away."

The Reddit user who posted the note said the farmer had "tied a load of dog turd bags" to the gate last week which had found in the field and had written: "Take your s*** home with you!"

They said the dog walker has posted a number of similar notes have also been posted around the Essex village and at the paddocks of the farm.

The local was slammed by the majority of social media users, with most taking the side of the farmer and calling for dogs to be kept on leads in the countryside.

One wrote: "What idiot doesn’t appreciate the countryside code around dogs being on leads on farmland.

"I live in the countryside and locally we have had so many sheep and lambs brutally killed by dogs this year, it’s sickening."

Another said: "Not just an issue for farm livestock either, there are real problems with wildlife being disturbed, killed or nests destroyed by off lead dogs and so many people seem to be completely ignorant to this."

A third wrote: "Whoever wrote this is an absolute idiot if they think it’s acceptable to have their dog off lead on farmland, or that making fun on penis size is humorous in the slightest."

Clearly you have a small penis, that is why you are trying to be a big bully to the locals that like to walk on the public footpaths.

But not everyone agreed, with some thinking the farmer was in the wrong for not allowing people to use a public footpath using "disgusting means".

Others took offence to the "small penis" insult.

One user wrote: "The whole 'small penis' s*** is really wearing on me, I’m seeing it more and more."

Another said: "It's a playground insult that manages to survive up into adulthood. Having a small penis is already borderline socially unacceptable and a source of anxiety for men and we reinforce it by using it as a catch all insult."

It's not the first time a passive aggressive note has been left for a farmer.

A furious neighbour slapped an angry note on a farmer's fence for "unreasonable" smells coming from his fertilised fields.

The disgruntled writer, said to be new to the area, complained that the smells from the natural chemicals would ruin his upcoming garden party near Marazion, Cornwall.