This is the moment a quick-thinking man saved his dog’s life – by performing the ‘Heimlich manoeuvre’ on the choking pet.

Electrician Joshua Aspey, 22, sprang into action when Sally, his Jack Russell, choked on a piece of cheese and started to fit.

The former lifeguard, from Watchet, Somerset, used skills he learned for his poolside job and thumped Sally on the back and chest to dislodge the blocked food.

He saved the ten-year-old canine’s life – and the drama, on Sunday, was captured on a CCTV camera set up in the kitchen of his parents’ house. 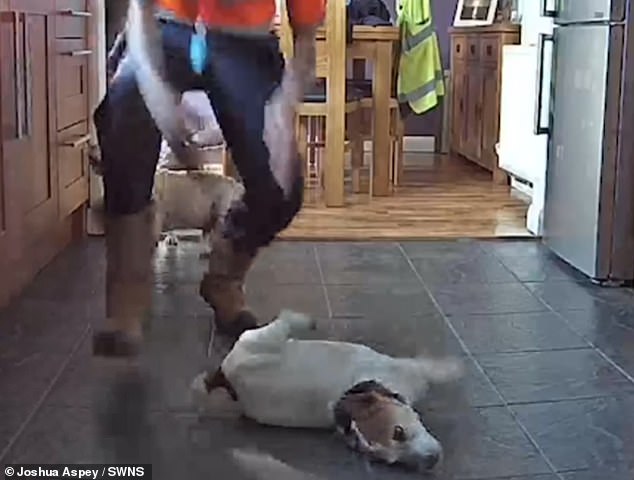 Electrician Joshua Aspey, 22, rushes to help Sally, his Jack Russell, as she chokes on a piece of cheese and starts to fit on the kitchen floor The former lifeguard, from Watchet, Somerset, uses skills he learned for his poolside job to help his stricken pet. He thumps Sally on her back and chest to dislodge the food obstruction 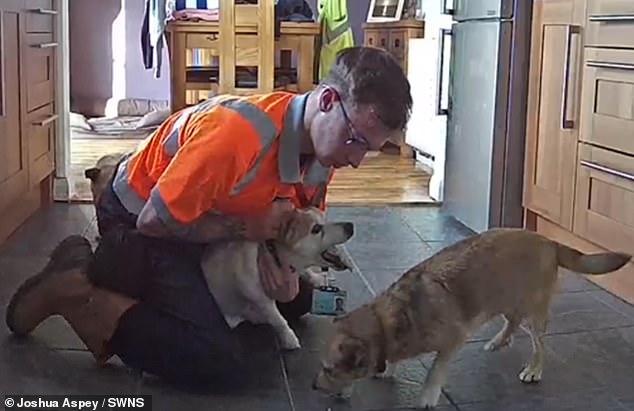 Mr Aspey shakes her head up and down, and back and forth, to bring up the two lumps of food – as well as putting his hands down her throat

Mr Aspey said: ‘I heard her paws scraping on the tiles, so I turned around and saw her fitting.

‘I just started to smack her on the back and shook her head up and down to try to bring it back up.

‘I shook her head back and forth and the first piece came out. There were two lots of food in there.

‘I put my fingers down her throat to get the second bit. Seeing your dog doing that is horrible. My dogs means the world to me.

‘I grew up with them and they are all I have known. They are part of the family. I used to work as a lifeguard, so have had the training on what to do if someone is choking. 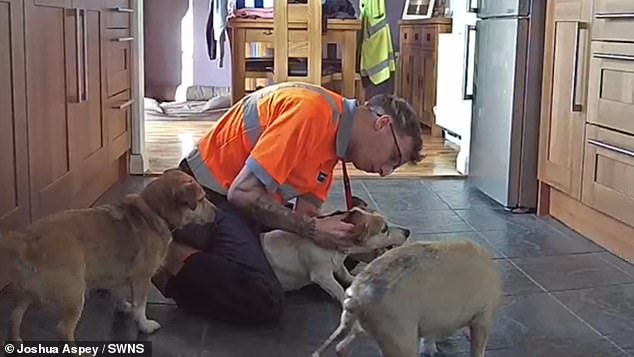 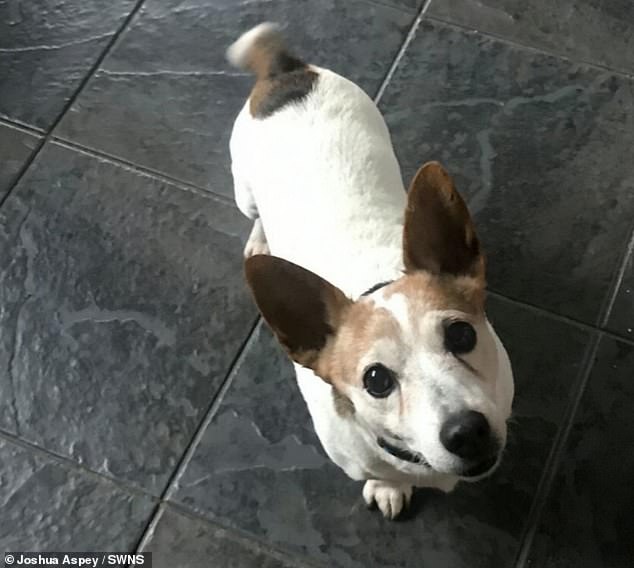 Sally recovered from her choking episode soon after being filmed. Mr Aspey describes her and his other dogs as ‘part of the family’

‘We were taught to thrust on someone’s chest or hit them across the back. She is a nightmare for scoffing food – it’s just what she does.

‘It was just instinct but was definitely scary. I was panicking.’

The incident occurred after Mr Aspey had dished out small pieces of cheese to all three of his dogs – including Border Terrier Mickey and Border Terrier cross Jack Russell, Daisy.

But ‘greedy’ Sally ate too much cheese too quickly and began to choke on the lumps.

Sally recovered soon after being filmed.