Dishwashers are earning up to $90 an hour in one of Sydney’s top restaurants, as labour shortages in the hospitality industry force some businesses to cut opening hours.

Rockpool Bar & Grill is paying dishwashers $90 an hour on Friday and Saturday nights “and we still can’t get them”, said executive chef Corey Costelloe.

Yet apprentice chefs earn as little as $13 an hour and are expected to work long hours, which participants at a meeting of leaders in the hospitality sector said contributed to labour shortages.

The meeting of industry and government representatives also discussed the findings of a survey which found 91 per cent said there was an over-reliance on foreign chefs in Australian kitchens, while 59 per cent identified a shortage of local chefs. 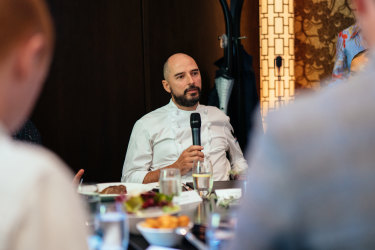 Rockpool executive chef Corey Costelloe speaking at a meeting of hospitality leaders to discuss the What’s stopping the next generation of Australian culinary talent? report.Credit:Camber Collective

“You can make more money stacking shelves in the early part of your career,” he said. “Or washing dishes.

“A lot of people are passionate about food, but just can’t take the long hours.”

Mr Costello also said some employers needed to “pick up their game” to attract more apprentices and staff: “They’re shooting themselves in the foot if they don’t make their work environment a good place to work, you’re not going to get the staff,” he said.

Asked if he would encourage his kids to join the hospitality industry, Mr Costelloe said: “No way.”

“Because of the hours, it’s hard. Like I want them to go to university, not have to go through what dad did,” he said. “But at the same time, my son loves cooking, he loves food, so that’s what he wants to do, and I couldn’t stop him.”

Long and unsocial hours was regarded as an impediment to attracting local staff by 55 per cent of women surveyed, but only 38 per cent of male hospitality owners and managers, the survey found.

Karma Lord, director of Hospo Voice, the hospitality arm of the United Workers Union, said large numbers of employers had built businesses on wage theft and insecure work, and preyed on the most vulnerable young and migrant workers. 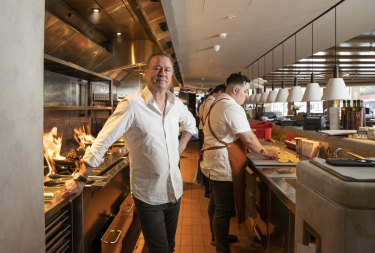 Renowned chef Neil Perry in the kitchen of his new restaurant Margaret in Double Bay.Credit:Louie Douvis

“Trained, experienced workers have quit this industry in droves because they are fed up with being treated like trash, and this has absolutely peaked during the pandemic,” she said.

Rockpool founder Neil Perry, whose latest project is Margaret restaurant in Double Bay, said he did not believe young Australians were turned off careers in the kitchen by low pay and long work hours.

But he called for greater public investment in training and apprenticeships for chefs.

“I think culinary training is as important as getting an arts degree,” he said.

Mr Perry is also a backer of the National Indigenous Culinary Institute, which seeks to nurture more First Nations chefs, as data from the federal government shows the overall employment rate for Indigenous Australians dropped from 54 per cent in 2007-08 to 49 per cent in 2018-19.

NICI chief executive Nathan Lovett said attracting people from Indigenous, marginalised or remote communities with an interest in cooking was a critical step in helping solve the industry’s skills crisis.

The survey found half of the owners and managers of restaurants, cafes, pubs and takeaways said trainees and apprentices needed more support to help them complete their training, while 43 per cent wanted greater access to training and apprenticeships.

The survey also highlighted the impact of the COVID-19 crisis on the hospitality industry, with two-thirds of businesses letting go of local chefs and 68 per cent losing international chefs during the pandemic.

Now Church of England wades into row over Oxford dean