The Liberal Party had the perfect opportunity to show that it doesn’t have a problem with women and blew it. Instead of putting Louise Staley in as deputy to Matthew Guy it elected yet another pale, stale male. Surely someone within the party could see that electing a female as deputy might send a positive message to the women of Victoria. But, no, what we get instead is business as usual – jobs for the boys. Irene Wyld, Cape Schanck

Making a meal of it, from lobster to rump?
The leadership “gene pool” within the 31-member Victorian parliamentary Liberal Party must be very limited if they think that Matthew Guy will turn around their electoral fortunes. With Guy at the helm we could see the party reduced to a rump at the next election, not unlike their counterparts in the Western Australian State Parliament. Robert Humphreys, Ringwood

Opposition isn’t enough, we need an alternative
Michael O’Brien has always been Matthew Guy’s apprentice, but could not equal Guy’s breathless outrage at absolutely everything Labor says or does. O’Brien did, however, equal Guy’s ability never to offer alternatives to Labor’s ideas. We need an alternative government, not simply an opposition. Phillip Hankin, Camberwell

Deckchairs rearranged, a new approach please
Imagine a Victoria where instead of the mindless carping of the past 18 months, there was an opposition party prepared to stand beside the government with a bipartisan voice, and help to chart the best way through the pandemic for all Victorians. Now that they have finished rearranging their internal deckchairs, might we see a more rational, supportive approach under Matthew Guy’s leadership? Somehow I doubt it. Claire Merry, Wantirna

Guy needs to step up on vaccine distribution
If Matthew Guy is to have any credibility as a potential future premier he must immediately and publicly insist that his federal counterparts stop favouring NSW in the distribution of vaccine and insist that Victoria receives its fair share. Neville Nicholls, Viewbank

A change with a dash of Einstein
Regarding the state opposition leadership change, it was Albert Einstein who said the definition of insanity was doing the same thing over again, but expecting a different result. Phil Akexander, Eltham

Of friends, land deals and accounting
What of Victoria’s future if Matthew Guy is the Liberal Party’s preferred leader? An article published in The Age (“A chequered history: Matthew Guy’s most controversial decisions”) almost three years ago to the day shows the measure of the man and the Liberal Party in returning Guy to leader of the opposition. Dubious friends, dubious land deals, dubious accounting. Margaret Callinan, Hawthorn

Outrageous deed
The secret channelling of vaccines to NSW is outrageous. I hope the voters of Flinders remember that this has occurred under the watch of their representative, Health Minister Greg Hunt. No wonder NSW Premier Gladys Berejiklian can boast that NSW is winning the race to be vaccinated. Dan Andrews has every right to be ropable as do all Victorians.
Jan Storey, Beaumaris

This is not OK
The federal government gave $13billion in JobKeeper payments to firms that ultimately recorded an increase in revenue, rather than a predicted 30 per cent loss. In what way is this OK? And how can the government be so careless with our money? Post-COVID, the nation will suffer a heavy financial hangover, with the next generation bearing the cost.

If Labor had done something similar during a time of crisis, the Liberal Party would have used it as an obvious example of why you can never trust them with our money.

Government financial support has been essential during lockdowns, but it should never go into the pockets of captains of industry at the expense of the households that so desperately need it.
Matt Dunn, Leongatha

Ideological bias
The list of wealthy businesses that increased their profits last year while receiving millions of dollars in taxpayer funding grows daily. The organisations that are conspicuously absent are universities. It is now beyond doubt that the government’s refusal to give JobKeeper to universities was completely ideological.
Malcolm Fraser, Oakleigh South

Giving to the rich
The report ″⁣Millions in JobKeeper go to luxury retailers″⁣ (7/9) shows clearly that the Morrison government’s JobKeeper program, which we were told was intended to help employers retaining as many of their employees as possible through the ″⁣COVID recession″⁣, was in reality a transfer of funds from employees to wealthy employers.
I’m hopeful that the people will demonstrate their opinion of that unforgivable ploy at the ballot box. The next federal election can’t come soon enough.
Douglas Mackenzie, Deakin, ACT

It’s not a dad joke
Fathers in Victoria, NSW and ACT not able to travel five kilometres to see their children on Father’s Day but the Prime Minister can fly interstate at taxpayer expense to see his girls. His hypocrisy knows no bounds.
Randall Bradshaw, Fitzroy

The great divide
There are so many wonderful, caring people in our community. People who are concerned for the wellbeing of others; who wear masks whenever they should, who stay within their five-kilometre zone, only go alone to shop for essentials, who don’t visit or have visitors to their home, who get vaccinated as soon as they can. And there are the others – selfish, arrogant law-breakers who cause and extend lockdowns and put the freedoms and indeed lives of all of us at risk. A divide in society that sadly ever will be.
Danny Cole, Essendon

Keeping the fire lit
Two down two to go for Western Bulldogs to emulate the miracle-makers of 2016. Luke Beveridge has acknowledged similarities between that tilt and what was playing out this year, but how do you replace the fanaticism caused by a 62-year premiership hunger?
Ian McKail, Cheltenham

Kick in the guts
The AFL puts all that energy into Auskick to get kids to love the game and then plays the AFL grand final at a time that ends when it’s past most of their bedtimes. Where’s the logic in that?
Donna Lancaster, Inverloch

Woman’s voice denied
Regardless of what Scott Morrison intended to say at the National Summit on Women’s Safety, he should not have reserved the opening keynote address for himself. He has denied a woman’s voice in this high-profile role. He has the privileged ability to hold public press conferences at any time; women do not.
Jenny Callaghan, Hawthorn

Hollow promise
Scott Morrison, how can you promise action on women’s safety when you are not prepared to accept Sex Discrimination Commissioner Kate Jenkins’ recommendation that legislation be changed to ensure employers have a duty to address sexual harassment.
Anne Fitzpatrick, Abbotsford

Morrison’s tin ear
I shake my head at the absolute tin ear displayed by the Prime Minister in his keynote address. I cannot believe that the recommendations of [email protected] report will not be fully implemented. Is the PM waiting for a report he can agree with? That he appropriated the stories of women who have suffered at the hands of men, to burnish his own image should be unbelievable, but sadly it is not. I wonder if all the money spent on this conference was channelled into funding the provisions needed to make women safe, how many women and children would be saved from harm.

I wonder how much patriarchal viewpoints influence men in power, preventing them from seeing women as equals. This PM will be judged on actions, not the empty words we have all heard far too often.
Rae Barclay, Highton

Climate of cynicism
So Rupert Murdoch’s News Corp is now changing tack and will support the efforts to combat climate change. We should welcome this move to support the science and stop denying reality, but we are entitled to be cynical.
After decades of supporting opposition to climate change and other questionable right-wing causes, what has brought about this reversal? A sudden awakening of a social conscience? No. Murdoch’s prime motivation is and always has been to chase the money. With major advertisers reviewing their support and a detectable change in public opinion on climate change, the landscape is changing and the money is starting to move away.
Bob Malseed, Hawthorn

Solution v cost
I was intrigued to read that the boss of Sky News, Paul Whittaker, in his comment to the Senate Inquiry into Media Diversity said, “I accept climate change is happening. The question is what is the solution and what is the cost.” How can someone ask what is a reasonable cost to save the planet? People who worry about the cost can never answer the question, ″⁣What price will we pay to preserve future humanity?″⁣
Nathan Feld, Glen Iris

Plea for healthcare
It was with some relief that I read the recent articles detailing the dire straits the Victorian Healthcare system is currently experiencing. As a clinical psychologist whose husband works as a doctor in an emergency department, I have been well aware of the overload the public health system is experiencing, as well as the dramatic increase in people needing help with their mental health. It felt like this issue was being ignored.

Every psychologist I know in private practice has closed their books, as they do not have any capacity to take on new and increasingly desperate clients.

I know you aren’t a front-line health worker, Scott Morrison, same way you don’t hold a hose when there is a bushfire crisis, but it would be nice if you listened and supported those who are.
Dr Lorraine Brown, Croydon North

Underfunding education
The article in relation to banning the pressuring of parents for cash raises a serious issue affecting thousands of Victorian families.

Our member agencies are inundated with requests for help with school costs every year, especially from November to February. This year the situation will be exacerbated as families experience financial hardship due to COVID job losses. While many schools do their best to support students to fully take part in education and the school community, others put undue pressure on parents to pay fees that are supposed to be voluntary.

Underlying all this is the underfunding of a basic, decent education for all in Victoria.
Kate Wheller, Executive Officer, Community Information & Support Victoria

Retraining mindset
Wise words from coal worker Tony Wolfe (“Put some energy into transition plans”, Comment, 6/9) who is keen to retrain to a safe job in new technology. Retraining successfully has happened before. 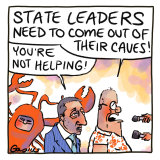 New leader
I expect the price of lobsters in Victoria to skyrocket with Matthew Guy back in business.
Kerry Lewis, Williamstown

Can a lobster change its pots?
Kevan Porter, Alphington

So it’s a change of jockeys – still the same horse, though.
Alan Inchley, Frankston

If Matthew Guy was the answer, what could possibly have been the question?
Marie Pirotta, Carlton

So, the Victorian Liberals have replaced the current loser with the previous loser. There’s evolution for you.
Barry Miller, Kyneton

If JobKeeper had been a Labor Party-designed plan, the Liberals would now be baying for blood and for heads to roll.
David Eames-Mayer, Balwyn

Finally
Forget COVID-19 vaccine passports. Once we reach 80 per cent vaccination, we’ll be able to differentiate the unvaccinated by their haircut (or lack thereof).
Walter Lee, Ashfield NSW