Musk replied with a less-than-ringing endorsement. 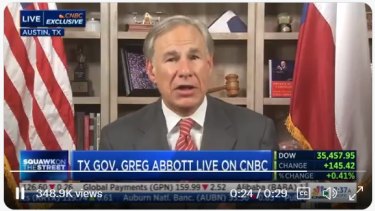 “In general, I believe government should rarely impose its will upon the people, and, when doing so, should aspire to maximise their cumulative happiness,” the billionaire tweeted on Thursday after Abbott’s remarks hours earlier on CNBC.

“That said, I would prefer to stay out of politics.”

Abbott claimed Musk’s support in arguing that the movement of companies and people to Texas won’t slow down after the state implemented the nation’s most restrictive abortion law and approved new limits on voting access.

In fact, the Governor said, the shift to Texas will speed up as some people leave “the very liberal state of California” partly because of its policies.

“Elon had to get out of California because, in part, of the social policies in California,” Abbott said, adding that he “frequently” talks to the chief executive officer of Tesla Inc.

“Elon consistently tells me that he likes the social policies in the state of Texas.”

Tesla is building a new factory in Austin, Texas, to make its Cybertruck pickup.

Musk’s Space Exploration Technologies Corp. is expanding its launch facilities near the Mexican border to test its futuristic Starship rocket.

SpaceX also tests rocket engines in McGregor, which is located between Dallas and Austin.

Other companies including Apple and Toyota have moved operations and university -educated, creative-class workers to Texas in recent years; enclaves like Austin and Houston’s Montrose neighbourhood felt a little like San Francisco with withering humidity. 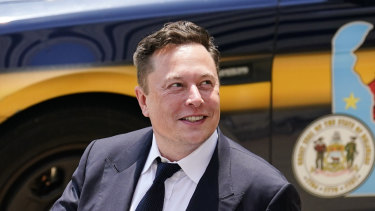 Elon Musk has been moving his companies to Texas but he doesn’t want to get involved in the state’s politics.Credit:AP

Those workers find themselves in a state taking far-right stances in a culture war with national ramifications for women’s autonomy and presidential politics.

“Other states are competing for people,” said Tammi Wallace, chief executive officer of the Greater Houston LGBT Chamber of Commerce.

“If you look at what our state is doing, and then you see another state where they’re not doing some of those things, you might say, ‘Well, the money’s good, but where do I want to raise my family?’”