DAILY MAIL COMMENT: Tories must stand up for suffering public

Here is a question: Can you name the Transport Secretary? No? That’s understandable. It’s actually an obscure politician called Mark Harper.

Here’s another: What exactly is he doing to stop militant rail unions blighting Christmas and New Year for thousands of ordinary people and businesses?

The depressing answer, as far as the Daily Mail can see, is very little indeed.

For months, the RMT and Aslef have crippled the train network with a campaign of rolling strikes over unaffordable and irresponsible double-digit pay demands. 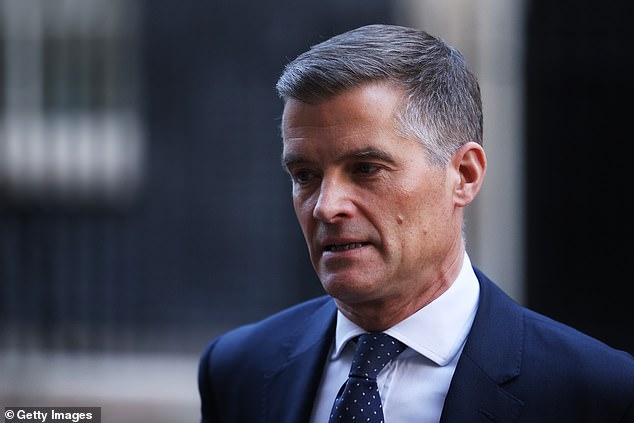 Until last night, we had seen neither hide nor hair of Transport Secretary Mark Harper

These hard-Left gangsters have inflicted pain on commuters, made cancer patients miss hospital appointments, and dealt a calamitous blow to our economy.

Of course, working from home has undermined the RMT’s wrecking tactics. So now it is targeting the festive period.

Walkouts will cause chaos for Christmas shoppers, those travelling to family gatherings, and retail and hospitality at their most lucrative time of the year.

But the unions couldn’t give two hoots. In fact, RMT chief Mick Lynch revels in bringing the railways to a standstill.

So this newspaper asks: Who is standing up for the public against these class-war dinosaurs? Until last night, we had seen neither hide nor hair of Mr Harper.

When Britain is being held to ransom by union thugs, we need a high-wattage Transport Secretary – not a lustreless dud.

Yes, ministers are bringing in strike-busting laws to keep the country moving on strike days. But it is scandalous they won’t be in place until late next year.

Fed-up commuters need the Government to ram the measures on to the statute book now. With Downing Street seemingly unable or unwilling to show resolve in the face of militancy, it’s no coincidence postal workers, nurses and civil servants are threatening to down tools over Christmas.

This is a concerted plan to cause maximum disruption at the most inconvenient time to the largest number of people. The unions are fighting a war against the Tories but the first casualties – as ever – are the long-suffering public.

There are only two years to the next election. The Tories must start using their massive majority productively.

Whether on the economy, housing, energy or immigration, they must push through legislation that benefits the country.

If Labour win power, it may be a generation before they get another chance.

In February, this newspaper applauded the Government for pledging to get tough on private parking firms who bullied motorists into paying unreasonable and extortionate fines to line their own pockets.

More fool us! For at the first whiff of grapeshot, ministers lost their nerve and watered down the rules. As a result, this legalised mugging continues apace.

Since then, these carpark cowboys have issued a record 30,000 parking tickets a day – and stand to collect a staggering £1billion in penalty payments this year.

Shouldn’t the Government protect drivers from unfair punishment – not reward the egregious cynicism of the parking pirates.

A threat to the union

Nicola Sturgeon responded to the Supreme Court slapping down her delusions of a fresh Scottish referendum with customary peevishnees.

Decrying the ruling as denying democracy, the SNP leader says the next general election will be a de facto independence vote.

Keir Starmer says he will rebuff any request for a border poll if he becomes PM. But can he be trusted? He has a readiness to say whatever will help him win power.

If the Tories want to avoid the disastrous breakup of the UK, they must get a grip.