Moscow: A man who had been convicted of kidnapping was chosen to be the prime minister of Kyrgyzstan on Saturday after feuding politicians agreed on a new government in an effort to end nearly a week of violent turmoil in the Central Asian country.

An agreement to put the government under the man, Sadyr Japarov, who was sprung from jail this past week by anti-government protesters, should help calm street violence. But it stirred alarm in some quarters that criminal elements had prevailed in a power struggle set off by disputed parliamentary election results last Sunday. 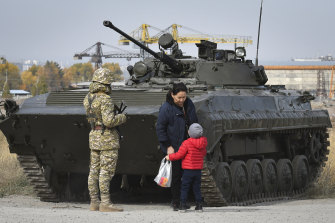 Soldiers of the Kyrgyz army at a city street checkpoint in Bishkek, Kyrgyzstan, on October 10, after President Sooronbai Jeenbekov decreed a state of emergency in the capital and ordered the military to enforce the measure. Credit:AP

Russia, struggling with a rash of unrest across the former Soviet Union, including protests in neighboring Belarus and fierce fighting between Armenia and Azerbaijan, has a military base in Kyrgyzstan but has mostly stood aside from the political chaos in Bishkek, the Kyrgyz capital. Moscow reached out to a senior security official offering help, but that official was then promptly fired.

On Friday, Kyrgyzstan's embattled president, Sooronbay Jeenbekov, declared a state of emergency in Bishkek, ordering troops onto the streets and confining residents to their homes. "The threat of losing our country is real," he warned.

Violence continued, however, fueled largely by Japarov's supporters, who hurled rocks and other projectiles at the followers of a rival would-be prime minister, Omurbek Babanov, and attacked journalists. Several shots were fired.

The unrest began with a wave of public anger over the victory of pro-government parties last Sunday in a parliamentary election tainted by credible allegations of widespread vote-buying. Protesters stormed jails and government buildings, sending the president into hiding.

The election results were then quickly annulled, opening the way for a new vote, but the turmoil escalated as rival opposition politicians began fighting for government posts, unleashing mobs of young men to confront each other on the street.

Arkady Dubnov, a Central Asia expert in Moscow, said the new prime minister, Japarov, who just days ago was serving an 11½-year sentence for organizing the 2013 kidnapping of a regional governor, had prevailed "because his supporters turned out to be the strongest."

It was unclear whether he would serve a full term or be forced to step down once new parliamentary elections are held to replace last week's annulled vote.

Portland mayor vows to 'use whatever means necessary' to keep peace for planned anti-Antifa, counter protest