Last year, amid a period of frenetic and dislocating policy changes, China’s authorities were determined to deleverage an over-leveraged economy. As this year gets under way, they are now responding to the unintended consequences of those policies with some urgency.

With a property crisis, energy crisis, food shortages and a significant slowdown in economic growth, Beijing is seeking to stabilise and consolidate in what is, with the twice-a-decade Communist Party’s national congress looming later this year, a sensitive year for Xi Jinping as he seeks an unprecedented third term as the party’s leader. 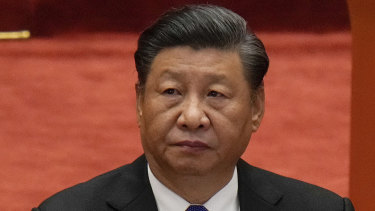 Chinese President Xi Jinping faces a sensitive year as he aims for an unprecedented third term as leader.Credit:AP

In December the People’s Bank of China reduced the reserves China’s banks are required to hold by 50 basis points and its benchmark one-year lending rate by 5 basis points for the first time since the onset of the pandemic.

There is now a widespread expectation, supported by reports in China’s state media, that the PBOC will loosen monetary policy further, with more reductions in the reserve requirements to pump more liquidity in the financial system and more cuts to lending rates.

The authorities have also committed to accelerating investment in 100 key national projects and providing financing for them – projects related to energy and food security, manufacturing and technology, green energy and affordable housing – while seeking to boost employment.

They have “encouraged” local governments, which sold nearly $US200 billion ($277 billion) of bonds late last year, to deploy them in projects as quickly as possible and have approved new local government issues for this year.

Earlier this week a statement released after a cabinet meeting on Monday said China’s leaders must make stabilising growth a higher priority and had to “firmly implement” a strategy of expanding domestic demand.

Having overdone the efforts to deleverage the economy last year and precipitated a crisis in the property sector, a sector that accounts for roughly 30 per cent of China’s economy and lending by Chinese banks, the authorities are also relaxing some of the previously stringent controls on the sector. They are urging Chinese banks to increase lending to developers and have removed lending for mergers and acquisition activity from the “three red lines” policy which sought to limit developers’ leverage.

That’s clearly aimed at making it easier for the teetering industry to restructure. With, according to Bloomberg, property developers facing nearly $US200 billion of loan repayments, interest payments and wage bills in the first quarter, the crisis that developed through the second half of last year is nearing a peak. 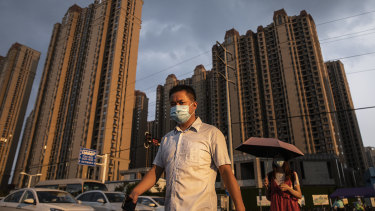 Banks are being encouraged to lend more, more quickly, against residential property and, for the first time in more than a year, are now allowed to offer securitised mortgages to free up capital, liquidity and lending capacity.

The easing of financial conditions underway in China relates largely to domestic conditions but there is another external influence, whose impact is magnified by hardline domestic policy, which is also impacting the economy.

China’s “zero-COVID” approach to the pandemic has been relatively successful in terms of health outcomes but disruptive for the economy. At the moment about 13 million people are locked down in Xi’an, the operation of the key port of Ningbo has been affected and China’s key manufacturing and technology hub, Shenzhen is experiencing an outbreak of infections.

The somewhat abrupt shifts in policy and conditions that developed last year are reflected in China’s sharemarkets. The CSI300 index (which reflects the performance of the top 300 stocks on the Shanghai and Shenzhen exchanges) has fallen almost 3 per cent since the start of the year and is down about 5.6 per cent over the past three months. The ChiNext index of tech stocks is down 8 per cent this year and nearly 13 per cent since mid-October.

China is targeting a calibrated monetary policy – after several years of trying to deleverage it is not seeking to flood its financial system with cheap liquidity.

China’s “zero-COVID” approach to the pandemic has been relatively successful in terms of health outcomes but disruptive for the economy.

The crisis amid its property developers, power outages and reduced factory output related to the big spikes in energy prices and their interaction with China’s price controls and its efforts to reduce carbon emissions, COVID and the general slowdown in economic activity are, however, forcing the authorities’ hands.

Not for the first time, deleveraging is being relegated to a second-order objective as the authorities pursue stability and a floor under a growth rate that has faltered.

While China is expected to post GDP growth of between 8 and 9 per cent when it reports the data for 2021 (that apparently high growth rate was relative to the pandemic-depressed outcomes in 2020), the authorities are expected to target a significantly lower growth rate of around or just below 6 per cent for this year. External economists see something closer to 5 per cent, or even lower.

If 2021 was a year of disruption as Xi Jinping directed a radical shift in China’s economic and social policies from socialism with Chinese characteristics, which had a core of market-led activity, to a more conventionally socialist/communist “common prosperity,” then policy generation this year ought to be much less volatile and disruptive.

Xi and the party leadership want economic and social stability as the Beijing Winter Olympics and the far more important National Congress near. Achieving that means managing the implosion in the property sector more effectively – overseeing an orderly deflation – managing COVID outbreaks and resolving the issues in their energy and food sectors to avoid the shortages and priced spikes that developed last year.

A complicating and constraining factor might be the divergence of China’s monetary policies from those of the US.

The US is starting to tighten monetary policy even as China (slightly) loosens its, which raises the spectre of a destabilising exodus of capital from China to the US and currency depreciation that would drain liquidity and add to the pressure on Chinese companies with offshore debt.

China blindsided markets and its own companies with its unexpected policy shifts last year. All the circumstances will dictate a less volatile policy environment in 2022 as Xi Jinping tries to stabilise the economy and consolidate and extend his own authority and power.