China threatens Defense Secretary with WAR: Minister tells Lloyd Austin that Beijing will ‘smash to smithereens any Taiwan independence plot’ and will ‘definitely not hesitate to start a war no matter the cost’

China has said it is prepared to go to war in order to defend its right to keep Taiwan from becoming an independent state.

China will ‘smash to smithereens any Taiwan independence plot and resolutely uphold the unification of the motherland’ Chinese Defense Minister Fenghe told U.S. Defense Secretary Lloyd Austin on the sidelines of the Shangri-La Dialogue conference in Singapore on Friday.

‘If anyone dares to split Taiwan from China, the Chinese army will definitely not hesitate to start a war no matter the cost’, Chinese Defense Ministry spokesman Col. Wu Qian quoted the Fenghe as saying during the meeting, in what is a escalating of tension, not least of which in the type of language being used.

Wei was quoted as saying China would respond to any move toward formal Taiwan independence by ‘smashing it even at any price, including war.’

Austin made it clear at the meeting that while the U.S. does not support Taiwanese independence, it also has major concerns about China’s recent behavior and military activity around the self-governing island suggested Beijing might be attempting to change the status quo. 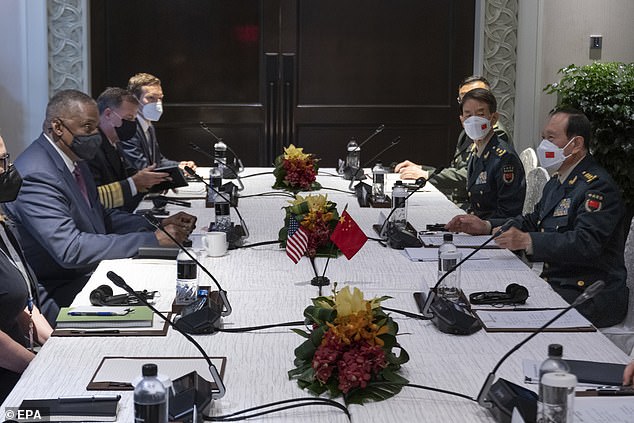 US Secretary of Defense Lloyd J. Austin, left, and Chinese Defense Minister Wei Fenghe met for the first time face-to-face at the Shangri-La Dialogue in Singapore on Friday 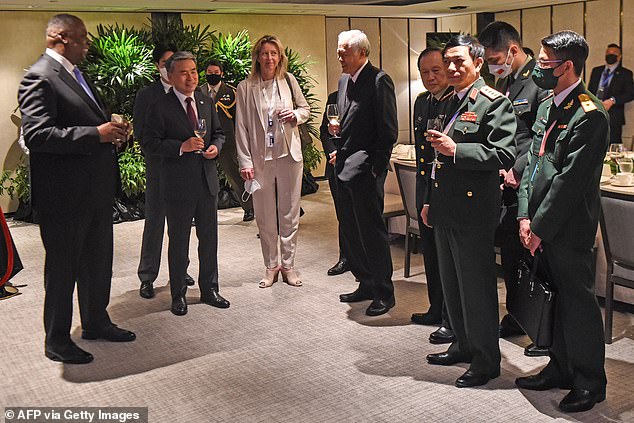 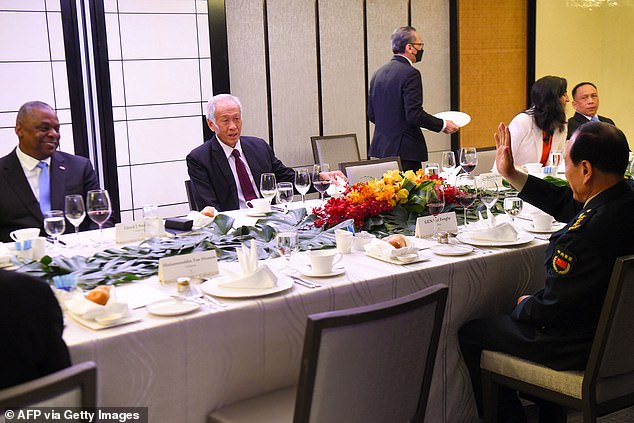 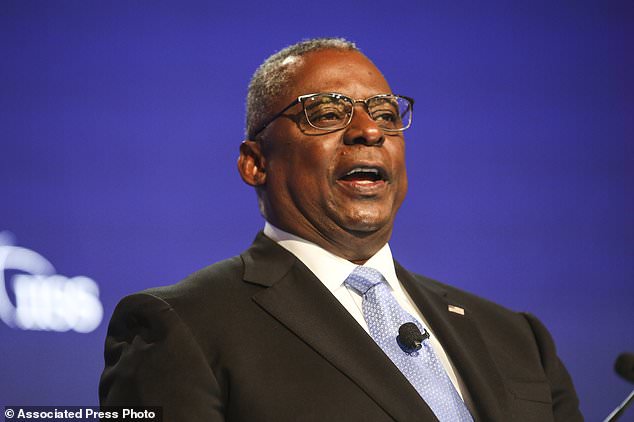 Austin noted a ‘steady increase in provocative and destabilizing military activity near Taiwan,’ including almost daily military flights near the island by the People’s Republic of China.

‘Our policy hasn’t changed, but unfortunately that doesn’t seem to be true for the PRC,’ he said.

Austin said there had been an ‘alarming’ increase in the number of unsafe and unprofessional encounters between Chinese planes and vessels with those of other countries.

A Chinese fighter aircraft dangerously intercepted an Australian military surveillance plane in the South China Sea region in May and Canada’s military has accused Chinese warplanes of harassing its patrol aircraft as they monitor North Korea sanction evasions. 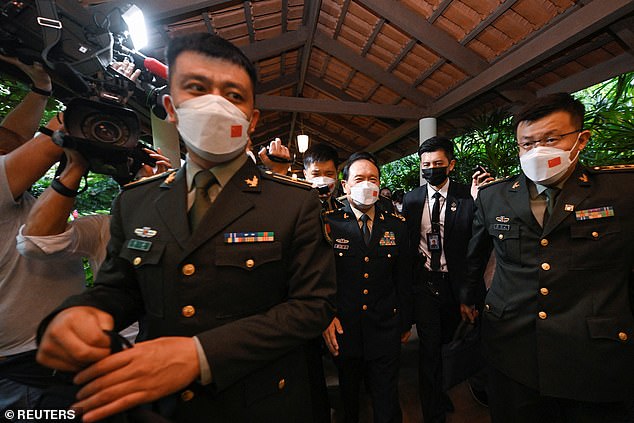 China’s State Councilor and Defence Minister General Wei Fenghe leaves after a bilateral meeting with U.S. Defence Secretary Lloyd Austin on the sidelines of the 19th Shangri-La Dialogue in Singapore, on Friday

Taiwan has complained for years of repeated Chinese air force missions into its air defense identification zone, which is not territorial airspace but a broader area it monitors for threats. Austin said these incursions had surged in recent months.

Taiwan’s foreign ministry thanked the United States on Friday for its support and denounced China’s ‘absurd’ claims of sovereignty.

Taiwan and China split during a civil war in 1949, but China claims the island as its own territory and has not ruled out using military force to take it.

China has stepped up its military provocations against democratic Taiwan in recent years, aimed at intimidating it into accepting Beijing’s demands to unify with the communist mainland. 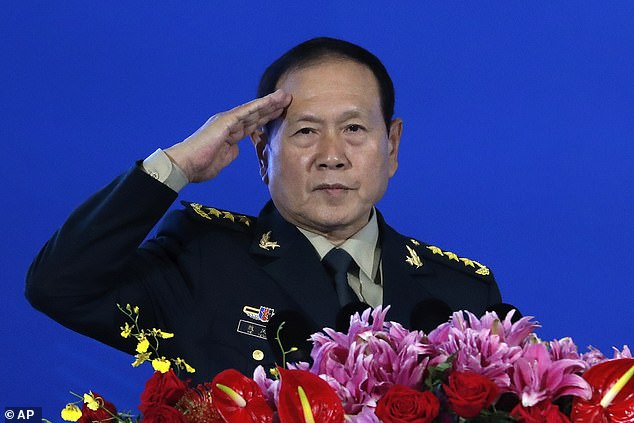 Chinese Defense Minister Wei Fenghe complained to his American counterpart about the latest U.S. arms package for Taiwan and warned of a possible conflict over the self-governing island that China claims as its own territory

‘We remain focused on maintaining peace, stability and the status quo across the Taiwan Strait,’ Austin said in his address. ‘But the PRC’s moves threaten to undermine security, and stability, and prosperity in the Indo-Pacific.’

He drew a parallel with the Russian invasion of Ukraine, saying that the ‘indefensible assault on a peaceful neighbor has galvanized the world and … has reminded us all of the dangers of undercutting an international order rooted in rules and respect.’

Austin stressed that the ‘rules-based international order matters just as much in the Indo-Pacific as it does in Europe.’

‘Russia’s invasion of Ukraine is what happens when oppressors trample the rules that protect us all,’ he said. ‘It’s what happens when big powers decide that their imperial appetites matter more than the rights of their peaceful neighbors. And it’s a preview of a possible world of chaos and turmoil that none of us would want to live in.’

In his speech, Austin said the U.S. stands ‘firmly behind the principle that cross-strait differences must be resolved by peaceful means,’ but also would continue to fulfill its commitments to Taiwan. 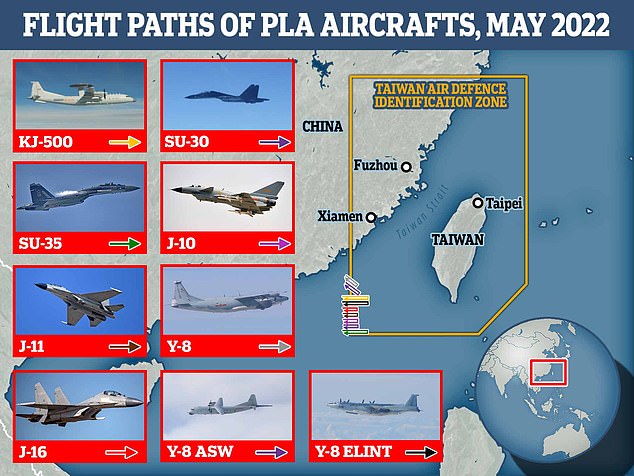 China’s ambitions to seize Taiwan has seen a ramping up of military activity. This graphic was from an exercise in May which saw 30 Chinese aircraft flying close to the island. The Chinese planes flew into the air detection zone briefly before turning back around and returning to the mainland

‘That includes assisting Taiwan in maintaining a sufficient self-defense capability,’ he said.

‘And it means maintaining our own capacity to resist any use of force or other forms of coercion that would jeopardize the security or the social or economic system of the people of Taiwan.’

Biden said last month the United States would get involved militarily should China attack Taiwan, although the administration has since clarified that U.S. policy on the issue has not changed.

Washington has had a long-standing policy of strategic ambiguity on whether it would defend Taiwan militarily.

The 1979 Taiwan Relations Act, which has governed U.S. relations with the island, does not require the U.S. to step in militarily if China invades, but makes it American policy to ensure Taiwan has the resources to defend itself and to prevent any unilateral change of status by Beijing. 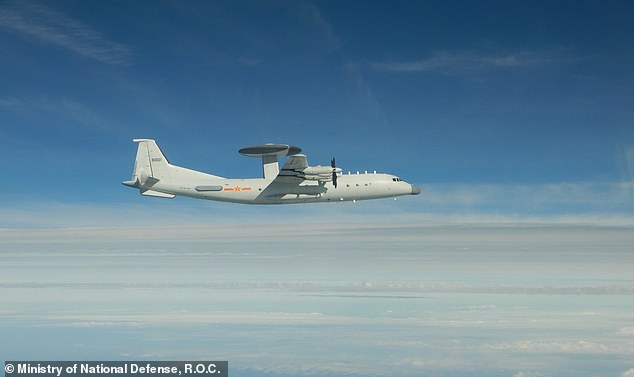 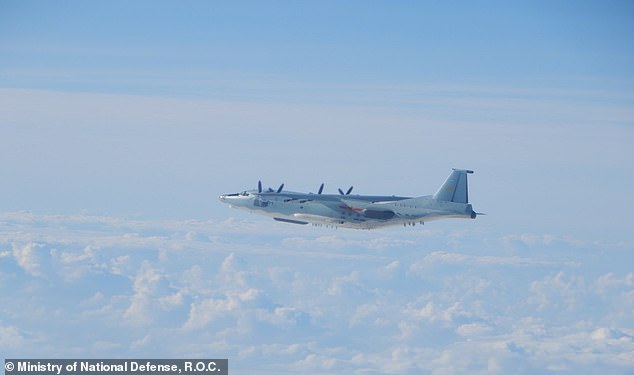 Last month, China sent 30 military aircraft toward the island in an ongoing campaign of regular flights.

Russia’s invasion of Ukraine has put China’s threats against Taiwan under new focus, prompting increased backing for arms sales and political support from Democrats and Republicans.

China upped the ante further in May, reaching out to the Solomon Islands and nine other island nations with a sweeping security proposal that, even if only partially realized, could give it a presence in the Pacific much nearer Hawaii, Australia, New Zealand and on the doorstep of the strategic American territory of Guam.

That is seen as a potential route to blocking access to Taiwan by the U.S. and its allies in the event China makes good on its threat to invade the island. 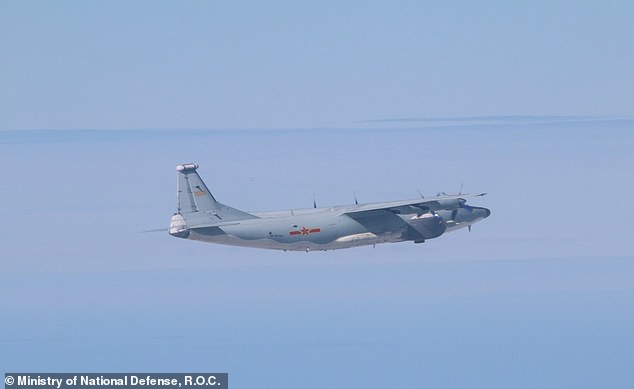 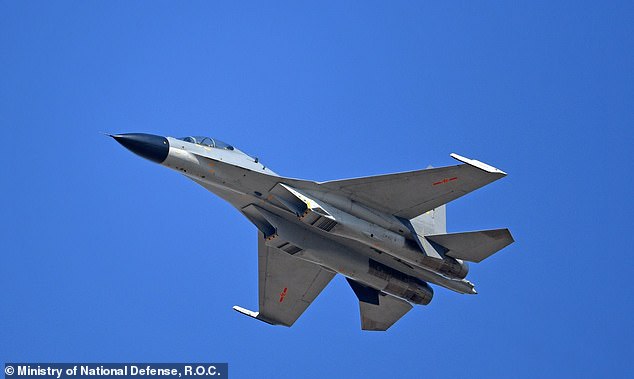 In October 2021, China flew 52 aircraft into Taiwan’s airspace in its single largest mission to date.

Over the same weekend, China flew a total of 93 aircraft close to the island in five separate missions, the largest of which comprised 25 planes.

China started flying near-daily missions into Taiwan’s airspace since the start of 2021, wearing down the island’s alert systems.

But most of those flights were comprised only of a single aircraft, with Beijing massively increasing the flights since the announcement of AUKUS, a military alliance between Australia, the US and the UK.

Experts believe the practice is part of a Chinese attempt to catch Taiwan off-guard so it becomes desensitised to the continued presence of aircraft close to its airspace.

Self-governing Taiwan, which is home to the Republic of China which fought against the Communist Party when it first emerged, views itself as an independent state but Beijing views it as a breakaway province.

Tensions around the island are long-standing but increased significantly in 2019 when President Xi Jinping committed himself to ‘reunifying’ the islands – reserving the right to use force if necessary.