Australia’s chief health officers are considering reducing the isolation period for people who test positive to COVID-19 following recent moves by health agencies in the US and the UK to shorten isolation requirements.

A senior federal government source, speaking on the condition of anonymity to detail the committee’s confidential work, said the Australian Health Protection Principal Committee was expected to report back early next year, with recommendations likely to be presented to national cabinet.

NSW Health Minister Brad Hazzard said authorities in his state were considering whether the isolation stint should be cut further.

“I firmly believe it’s worthy of strong consideration, but preferably it should be done in a national uniform approach approved through [the Health Protection Principal Committee],” he said. 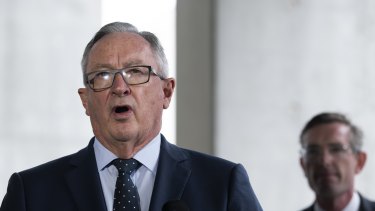 “I’m very aware the CDC has reduced the period of isolation. This is a proportionate risk environment that we’re in, and having periods of isolation that impinge on the economic capacity of business and individuals is very problematic.”

The US Centres for Disease Control and Prevention (CDC) recommended on Monday (US time) that the isolation period drop from 10 days to five for people who do not have symptoms, while the UK government announced last week that people could leave isolation with a negative rapid antigen test after seven days.

The CDC recommendation says people released early should wear a mask for a further five days after quarantining.

“The change is motivated by science demonstrating that the majority of SARS-CoV-2 transmission occurs early in the course of illness, generally in the 1-2 days prior to onset of symptoms and the 2-3 days after,” the agency said in a statement that also flagged people who had received a vaccination booster shot may not need to quarantine if exposed to a COVID-positive person.

The Health Protection Principal Committee is also reviewing the level of exposure required for a person to be defined as a close contact, as it looks to tweak COVID-19 protocols to minimise disruption to people’s lives as the spread of COVID-19 is normalised. 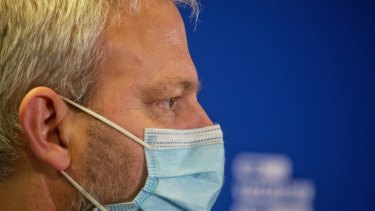 The review of isolation rules was confirmed on a day when Victoria recorded 2738 new cases on Tuesday, surpassing the previous record of 2297 cases in mid-October. NSW recorded more than 6000 new cases.

Several testing facilities in Melbourne were forced to close within minutes of opening on Tuesday morning, as Victorians again waited in hours-long queues and the pathology laboratory scientists’ union complained of understaffing.

Chief Health Officer Brett Sutton urged people who needed pre-travel tests to do so after midday to ease the load on test sites.

“The [Department of Health] reiterates that PCR testing for interstate travel is not the most efficient use of testing resources in the current environment,” Professor Sutton said.

University of Melbourne epidemiologist Tony Blakely said people could be let out of quarantine after five days if they tested negative to a rapid test. He said an advantage rapid tests had over PCRs is that at-home tests were good at detecting whether a person was infectious, whereas people can test positive on a PCR test long after they have stopped being infectious.

“If someone has COVID and they test negative on day five, let them go; there’s no point keeping them in there,” he said. “In the world where we’re living with COVID, the marginal benefit of keeping people in isolation when they test negative is small.”

Grattan Institute health economist Stephen Duckett said the isolation stint should probably be reduced and this would help cut the number of healthcare workers in isolation – a growing problem in Victoria and NSW.

The number of days by which authorities could cut the time would depend on how much risk they were willing to take about a small fraction of people potentially leaving quarantine while still infectious, he said.

“There’s always been a probability distribution about what the optimum time is. Is the threshold 99 per cent chance you don’t still have COVID [when you exit isolation] or 90 per cent?” he said.

Professor Catherine Bennett, chair in epidemiology at Deakin University, said Australia should also cut isolation times if the data showed people were not testing positive after a certain period.

“Hopefully that might provide more incentive for people to get tested earlier,” Professor Bennett said.

Hassan Vally, an associate professor in epidemiology at Deakin University, agreed that it made sense to cut the isolation period. He said that in the first year and a half of the pandemic there was a need to ensure people isolated for longer to make sure the incubation period was completely covered.

However, he said now the population was highly vaccinated, there were options for treatments and it seemed Omicron was less severe.

“We have to be a little bit more pragmatic about how long we ask people to isolate for, because the implications of someone getting an infection are not the same,” he said. “As the threat the virus poses to the community reduces we can start to be a bit less restrictive in terms of those cut-offs.”

Professor Mike Toole, an honorary epidemiologist with the Burnet Institute, said the US CDC’s decision was made based on the observation that people with Omicron were infectious for a shorter time than those with the Delta variant. He said the decision was something Australia should also consider.

“It does give people three days more freedom,” he said. “But it should come with advice to strongly adhere to mask laws. You can’t just say, ‘Oh, I’ve had COVID, it brought me immunity, I don’t need to worry.’ You have to worry about the other people.”

“My members working in those areas that are doing COVID testing are overwhelmed, they are exhausted,” secretary Paul Elliott said.

He said understaffing in private pathology services had been a chronic problem prior to Christmas but it had been compounded by some staff being on leave over the holiday season.

Testing capacity reduced to about 80 per cent over Christmas because of staff leave but has moved back towards full capacity since then.

“We are dealing with staff who are members who are really upset about it, burnt out, absolutely anxious to see some light at the end of the tunnel, but it’s really difficult.”