Career criminal, 35, admits killing 74-year-old grandfather in botched mugging as he walked home from playing darts at his local pub in 2018 – while already in jail for robbing elderly woman of her handbag

A career criminal has admitted killing a grandfather during a botched mugging as he walked home from playing darts in his local pub.

Rhys Burroughs, 35, followed retired dock worker Clive Wyard, 74, on his 20-minute walk home from the Royal George pub and attacked him outside his bungalow in Valley Road, Ipswich, Suffolk in July 2018.

A passer-by found the pensioner lying unconscious with serious head injuries on his driveway just before 7.15am the next day.

Father-of-three Mr Wyard was put in an induced coma, but died 12 days later in Ipswich Hospital.

Detectives initially said that they were keeping an ‘open mind’ about how he sustained his injuries. A year later, they said that his death was being treated as murder following an ‘exhaustive inquiry’ by the Joint Norfolk and Suffolk Major Investigation Team.

Burroughs of Ipswich, who has 43 previous convictions, was arrested in 2019 and charged last year with murder and attempted robbery after forensic evidence linked him to the crime scene.

He denied the offences and was due to stand trial this month, but admitted manslaughter and attempted robbery at an Ipswich Crown Court hearing yesterday. 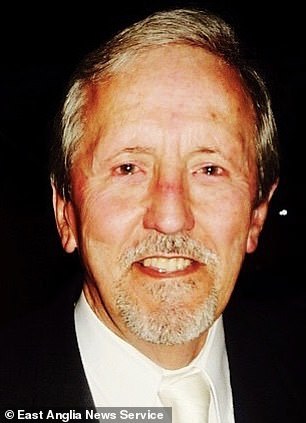 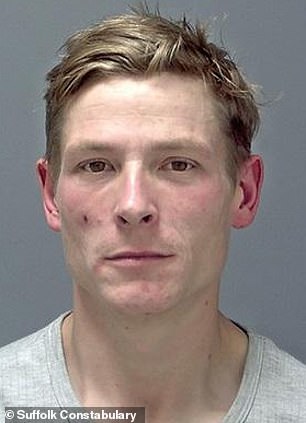 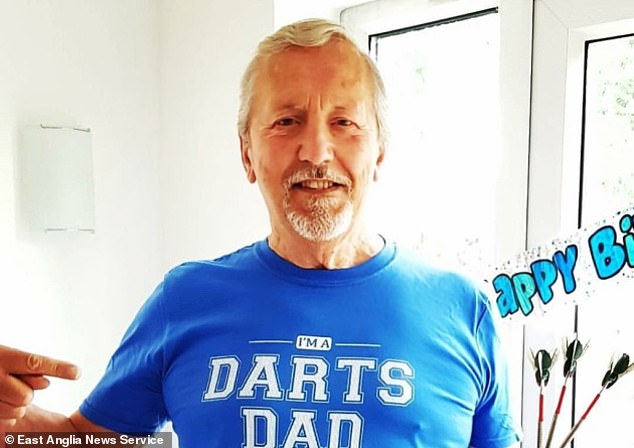 Pictured: Mr Wyard who was killed in a bungled robbery by Burroughs in July 2018 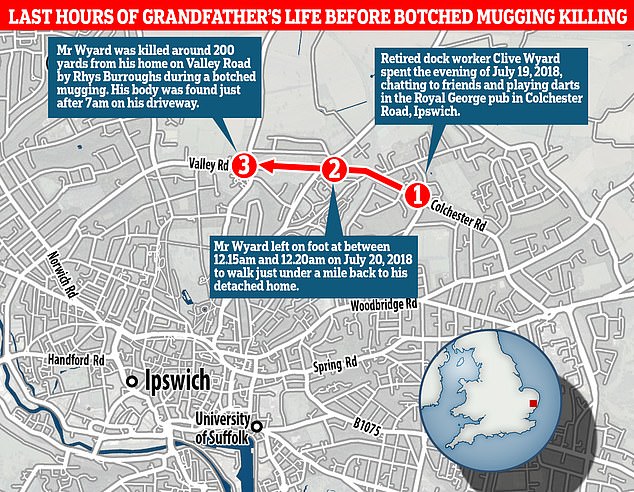 Rhys Burroughs followed retired dock worker Clive Wyard on his 20-minute walk home from the Royal George pub and attacked him outside his bungalow in Valley Road, Ipswich, Suffolk on July 19, 2018. A passer-by found the pensioner lying unconscious with serious head injuries on his driveway just before 7.15am the next day

Christopher Paxton QC, prosecuting, said the pleas were acceptable and there was no need for a trial on the murder charge.

The court heard that Burroughs was currently serving an eight-year prison sentence imposed in April 2019 for robbing an elderly woman of her handbag and a burglary.

Judge Martyn Levett adjourned sentencing until September 5 for a report by the probation service to consider if he should be regarded as a dangerous offender. He warned Burroughs he was facing a ‘very long prison sentence’.

A Suffolk Police statement said: ‘His guilty pleas are an admission that he assaulted and injured Mr Wyard during an attempted robbery and although he attests he did not intend to kill him, his actions that night were undeniably the cause of his death.’

Mr Wyard had spent the evening of July 19, 2018, chatting to friends and playing darts in the Royal George pub in Colchester Road, Ipswich as he usually did on Thursday evenings. 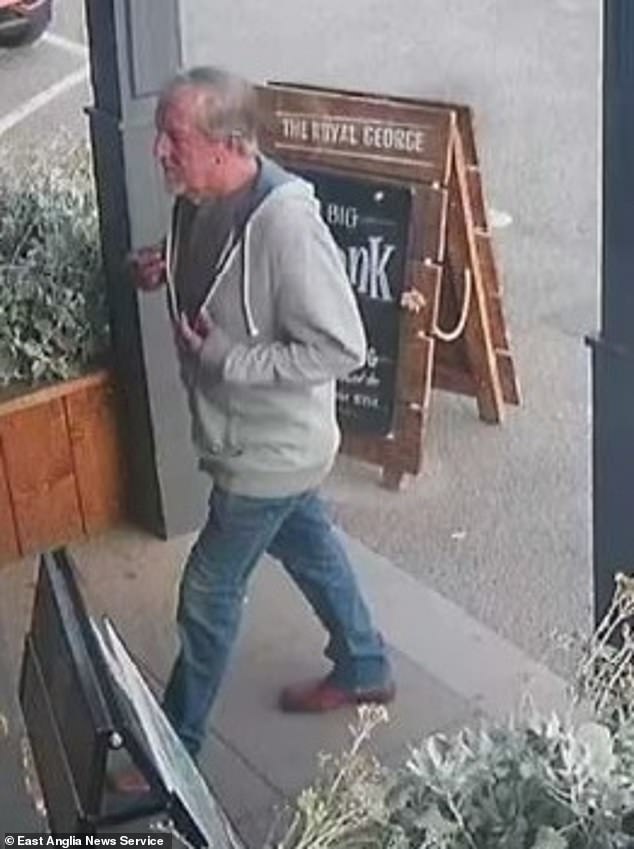 A CCTV image showing Clive Wyard walking in to the Royal George pub in Ipswich on July 19, 2018. He was attacked by Burroughs later that night during a bungled robbery 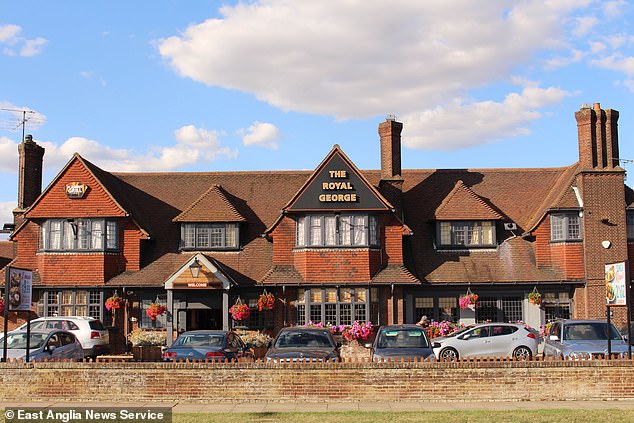 Mr Wyard was captured on CCTV a few minutes later walking past a property slightly further along Colchester Road.

Further CCTV footage showed him walking along Valley Road at 12.37am when he was only 200 yards from home.

He was found on his driveway with injuries to his head and face, including black eyes, a split cleft lip, a further cut to his lip, a deep cut to his cheek and other cuts to his body.

A post-mortem examination concluded that Mr Wyard died as a result of a severe head injury, having sustained a skull fracture and a bleed on the brain.

Mr Wyard’s children Desmond, Jo and Jackie released a statement through police in 2019, saying: ‘Our father was one of a kind and was cruelly taken from us. Life will never be the same.’

His daughter Jo Wyard described him as ‘the most gentle, selfless, loving man you could ever meet’ whose live revolved around his children and grandchildren.

She added: ‘Words cannot begin to describe the devastation we are feeling. He was fit and healthy. Our dad had never been ill or in hospital in his life.’

Girl, 7, fighting for life after being hit by a HGV outside school as community left in shock

Student paper slammed for 'how to shoplift' guide