Make the most of it! Brits bask in 73F sunshine on the LAST day of summer – ahead of wind and rain set to lash the north tonight

Britons have been soaking up the sunshine on the last day of summer as the Met Office warns Scotland and the north of England to expect strong winds and rain in the coming days.

Temperatures across much of the south east of England have peaked at around 73F (23C) today, with bright and sunny spells expected throughout the day, according to Met Office forecasters.

Today is the last full day of astronomical summer in the UK, with tomorrow marking the beginning of autumn.

People have today been out enjoying what might be the last of the British summer sun with temperatures almost 10F higher than the average for this time of year.

According to the Met Office, this month is on track to be one of the warmest Septembers on record. Temperatures are running around three degrees Celsius above average in many areas and today will feel unseasonably warm where it is sunny. 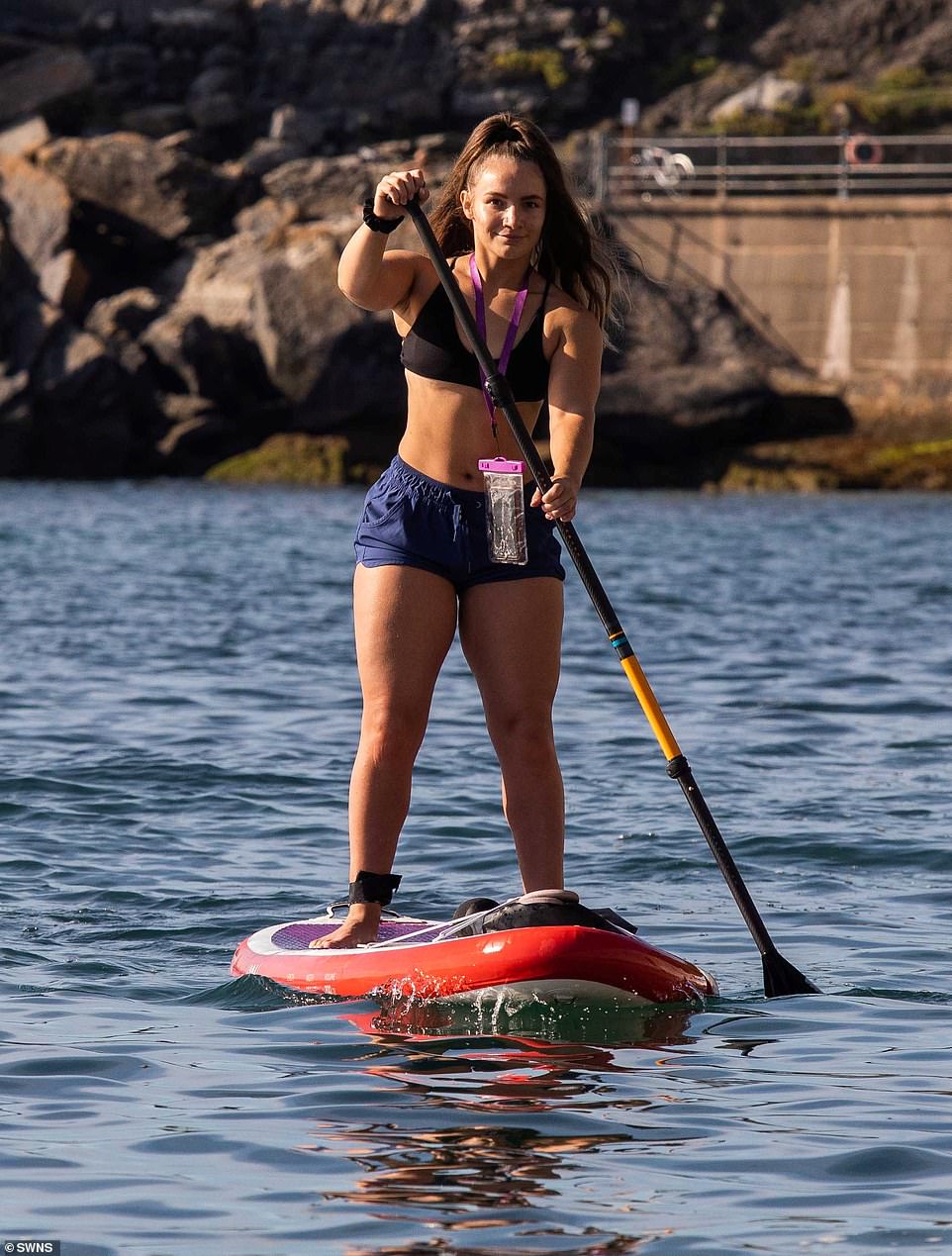 Naomi Prosser aged 28, enjoys the sea and sunshine in Torbay, Devon, as Britons make the most of the warm temperatures on the last day of summer 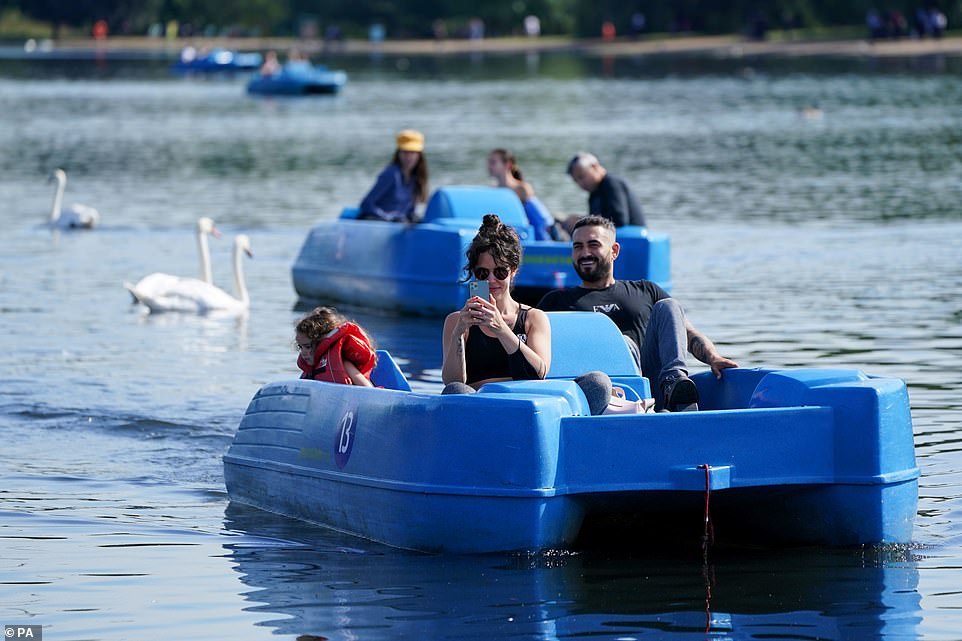 People have been enjoying the pedalos on the Serpentine at London’s Hyde Park where temperatures have peaked at 73F. The weather is expected to stay warm until the weekend 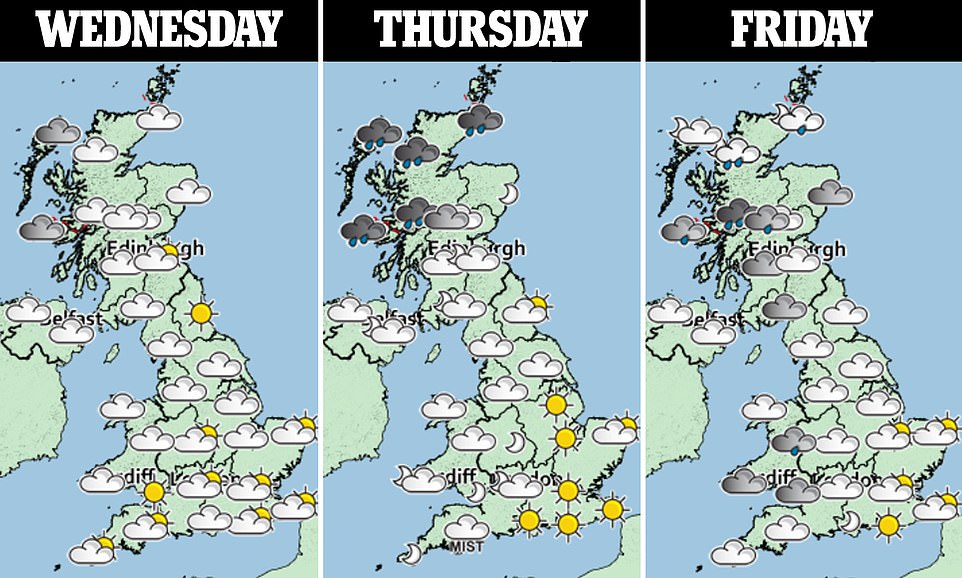 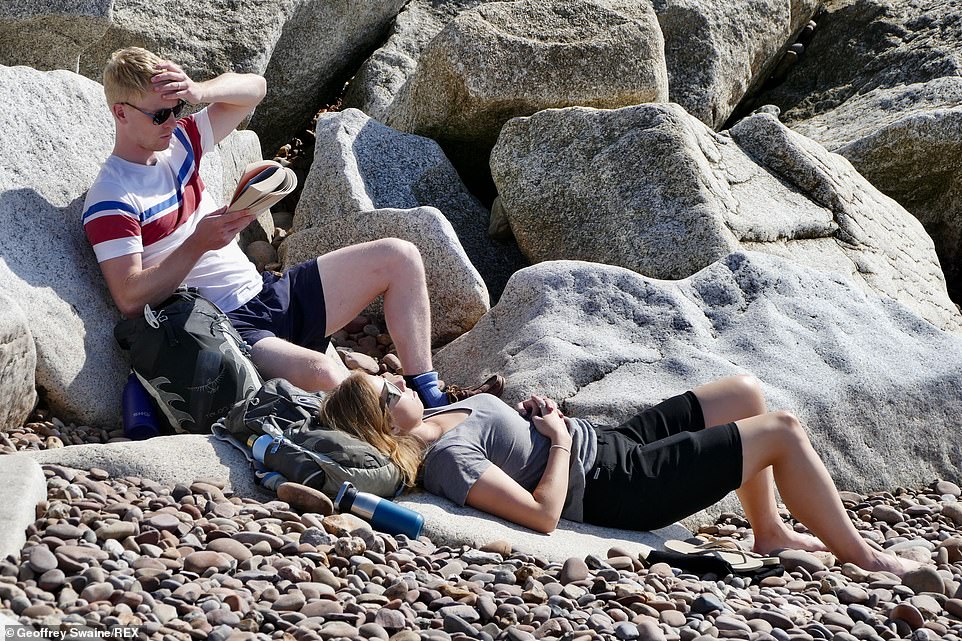 Sunseekers make the most of the lovely sunny weather on the beach in Sidmouth, Devon 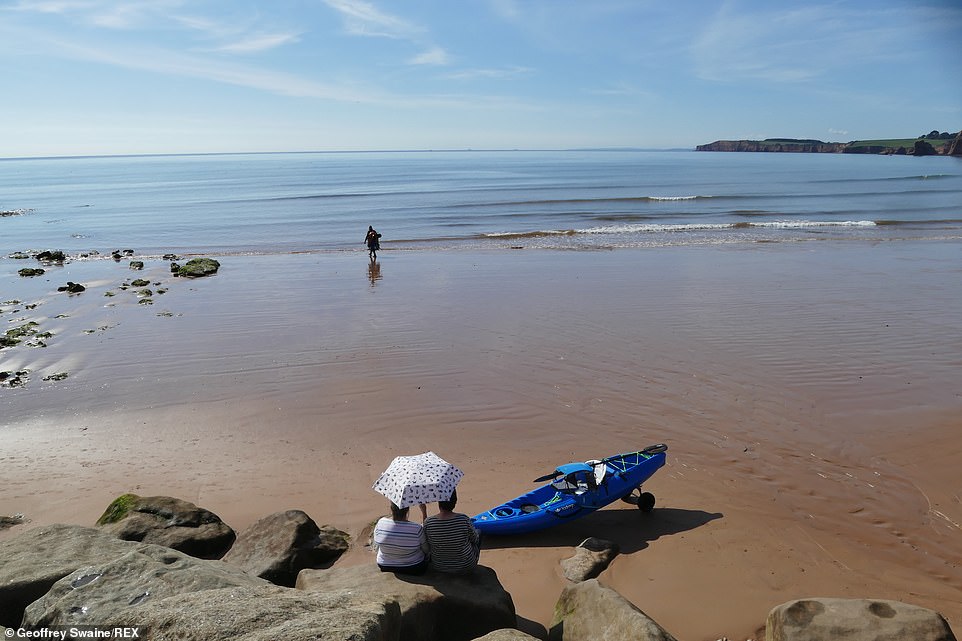 People make the most of the lovely sunny weather on Jacobs Ladder Beach, Sidmouth, Devon. Temperatures are 10F warmer than the average at this time of year

However, as the day progresses, the north and northwest of Scotland are set to become increasingly cloudy and windy with some patchy rain or drizzle, and coastal gales developing across the far northwest from this afternoon.

The Met Office said those areas can expect ‘two bouts’ of strong winds, firstly starting tonight and into tomorrow morning and again on Wednesday night into Thursday morning.

Elsewhere in the UK, it is expected to stay dry, fine and warm – with temperatures peaking at 70F on Wednesday and Thursday – after the clearance of any early fog patches expected in the east of England.

The Met Office predicts temperatures, particularly in the south east of England, to hold over the next few days and into the early part of the weekend.

Rain predicted across the northwest of Scotland on Wednesday is expected to sink into Northern Ireland and southern Scotland by tomorrow evening, but will be much lighter.

Other areas of the UK will see mostly sunny and warm weather again once the early fog patches clear, the Met Office said.

As the weekend approaches, periods of heavy rain are expected in northwestern areas, with gale force winds in the far north at times.

Elsewhere, it will be mostly ‘dry, bright and feeling warm but breezy with some showers’, according to the Met Office. 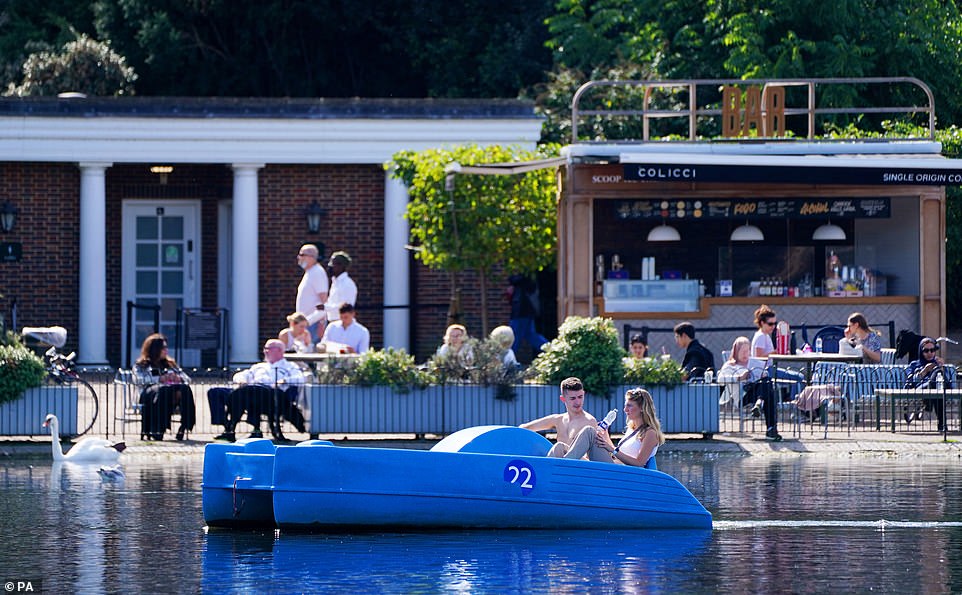 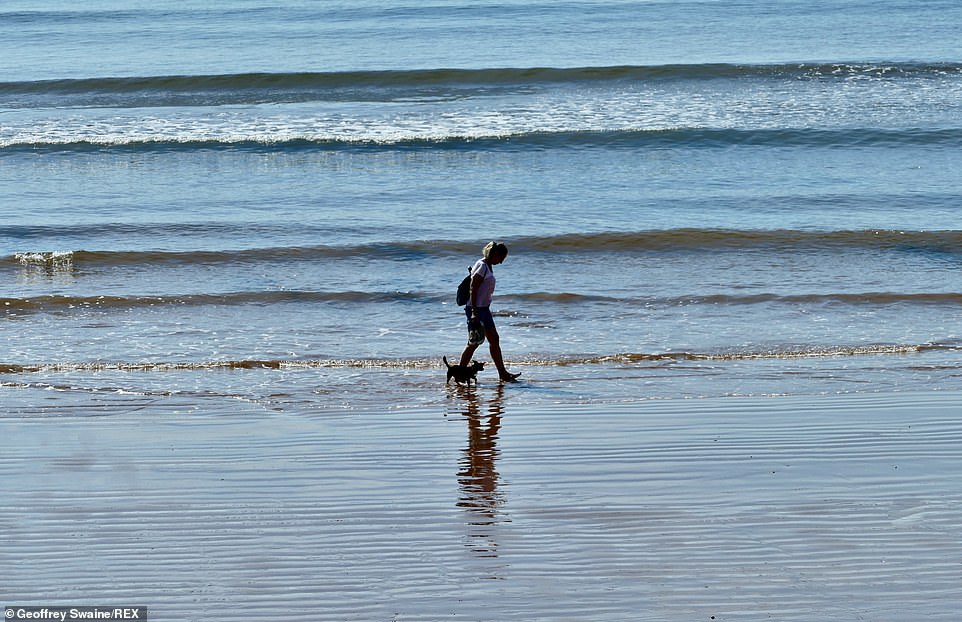 A woman walks her dog in the shallow waters at Jacobs Ladder Beach, in Sidmouth, Devon, on the last official day of summer in the UK 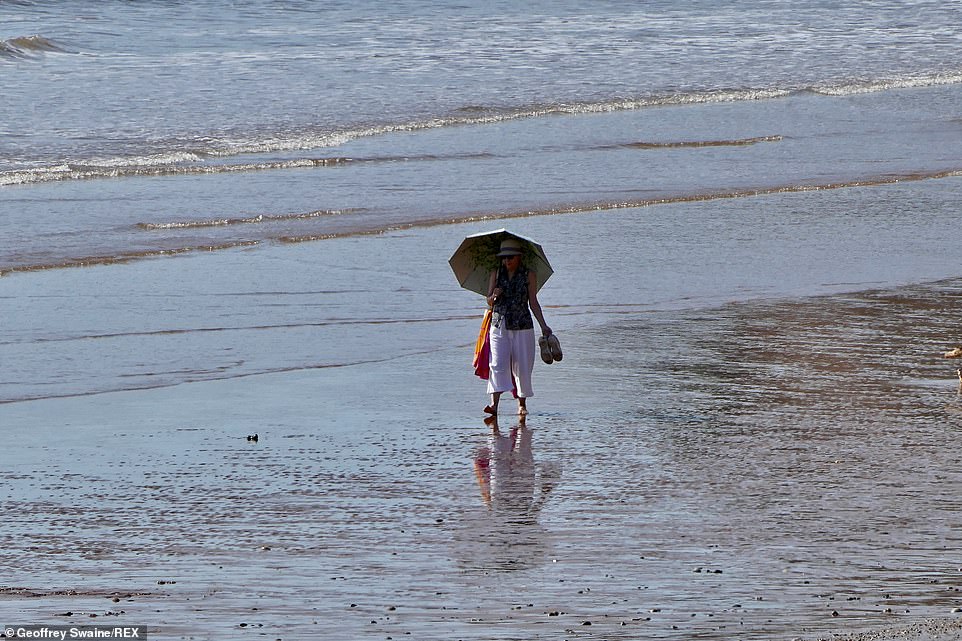 Another woman opts for the umbrella to block out the bright spells of sunshine experienced in Sidmouth, Devon, on Tuesday morning

Did you see it? Stunning photos show last night’s Harvest Moon as it lit up skies around the world ahead of the Autumn Equinox

By Ryan Morrison for MailOnline

A stunning selection of photographs captured last night’s Harvest Moon in all its glory, as the Earth’s natural satellite lit up skies around the world.

This is the closest full moon to the autumnal equinox – the moment the sun appears to cross over the celestial equator – on September 22.

In the UK, the full moon rose at 19:23 BST and set at 06:52 BST early this morning, but the spectacle will appear full and bright for the next two nights.

On average, the moon rises 50 minutes later than sunset each day, but when it is an equinox moon, it can rise as little as 25 minutes after sunset.

The September full moon was named Harvest Moon in the 1700s when farmers depended on the glow of moonlight to harvest crops late at night.

The Harvest Moon rises earlier, sets later and in some very northerly latitudes like Alaska, can remain full and bright for up to a week. 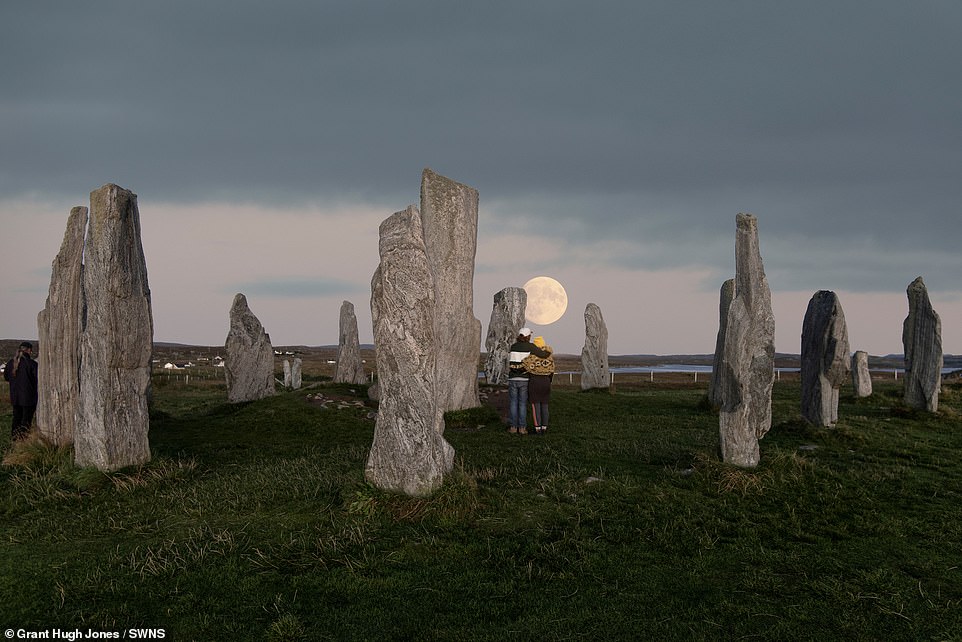 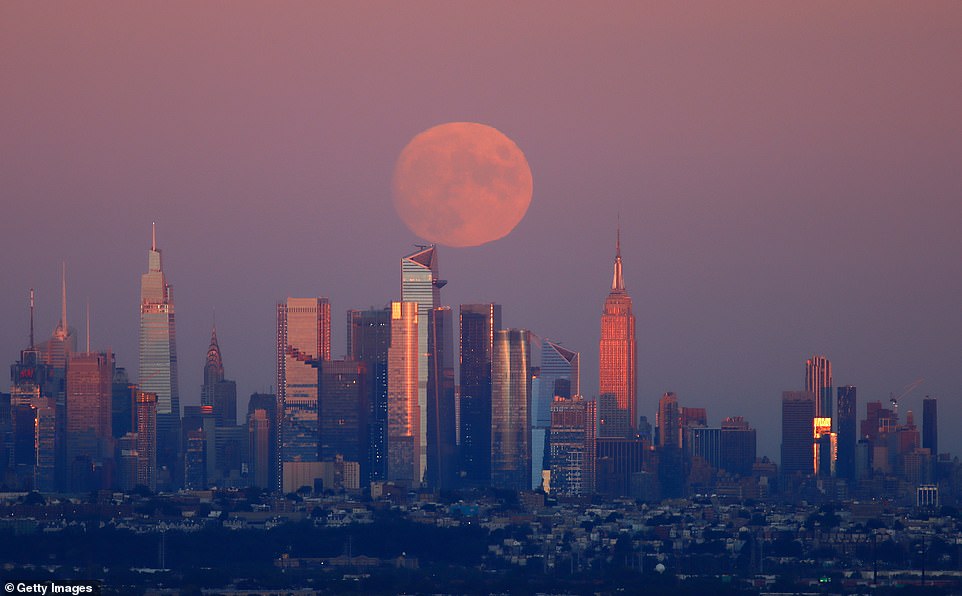 The Harvest Moon rises behind midtown Manhattan, One Vanderbilt, the Chrysler Building, the Spiral, Hudson Yards and the Empire State Building as the sun sets in New York City 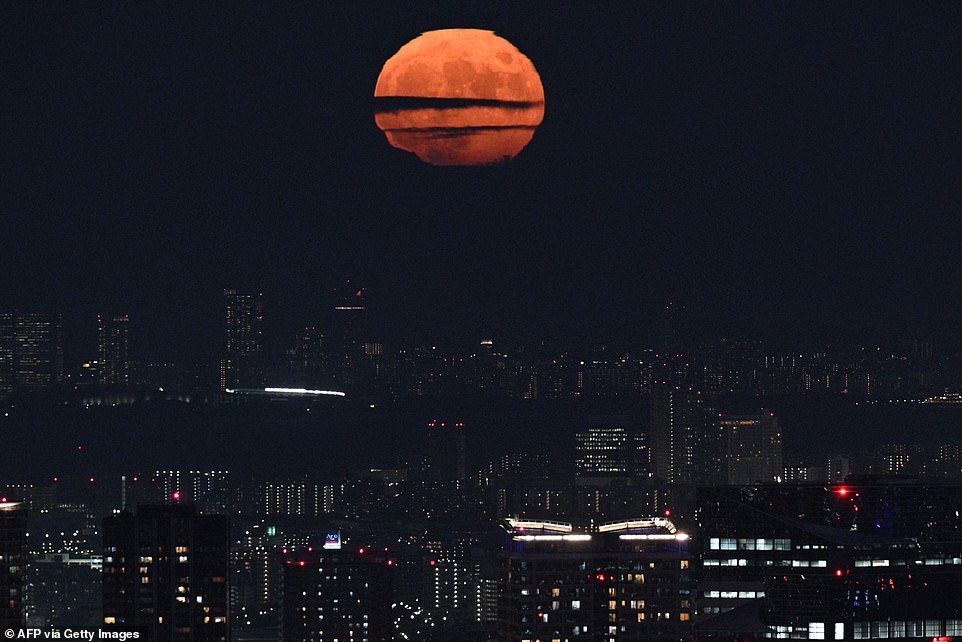 The full moon is seen from Tokyos Roppongi district. This is the closest full moon to the autumnal equinox – the moment the sun appears to cross over the celestial equator – on September 22

SHINE ON HARVEST MOON: WHAT IS THE EQUINOX MOON?

The Harvest Moon is the first full moon that takes place close to the autumn equinox, happening up to two weeks either side of the annual event.

It derived its name because farmers are able to use the moonlight to work late into the night under moonlight.

For a Harvest Moon this can be as little as 20 minutes before or after, depending on how far north you are.

Unlike other moon names, the Harvest Moon isn’t tied to a specific month. Whilst it is usually in September, it can also occur in October.

According to NASA, farmers used the light of the full moon closest to the equinox to extend their workday beyond sunset before electric light was invented.

‘It was the only way they could gather their ripening crops in time for market.

‘The full Moon closest to the autumnal equinox became “the Harvest Moon,” and it was always a welcome sight,’ the US space agency explained.

‘The term became further entrenched in popular culture thanks to a 1903 pop tune called “Shine on Harvest Moon”.’

This is the fourth full moon of summer this year, and will peak before the equinox actually happens, making it a summer moon.

In the southern hemisphere it is the fourth full moon of the winter, known as a worm moon – in the winter the Harvest Moon happens in March.

In one of the images of the 2021 Harvest Moon, a photographer snapped a star-struck couple gazing at the spectacle as it rose over an ancient stone circle on the Isle of Lewis.

Grant Jones, 50, lives on the Hebridean island and usually takes landscape photos, but was out during moonrise and snapped the shot on Sunday – just before the moon reached its full peak.

‘It was twilight, it was getting dark. I knew the moon would be rising. They came into the stones and they appeared transfixed by the moon. It made a lovely image.’

The Harvest Moon got its name from the ability farmers had to use the extra light to harvest their crops until the early hours – long after sunset. 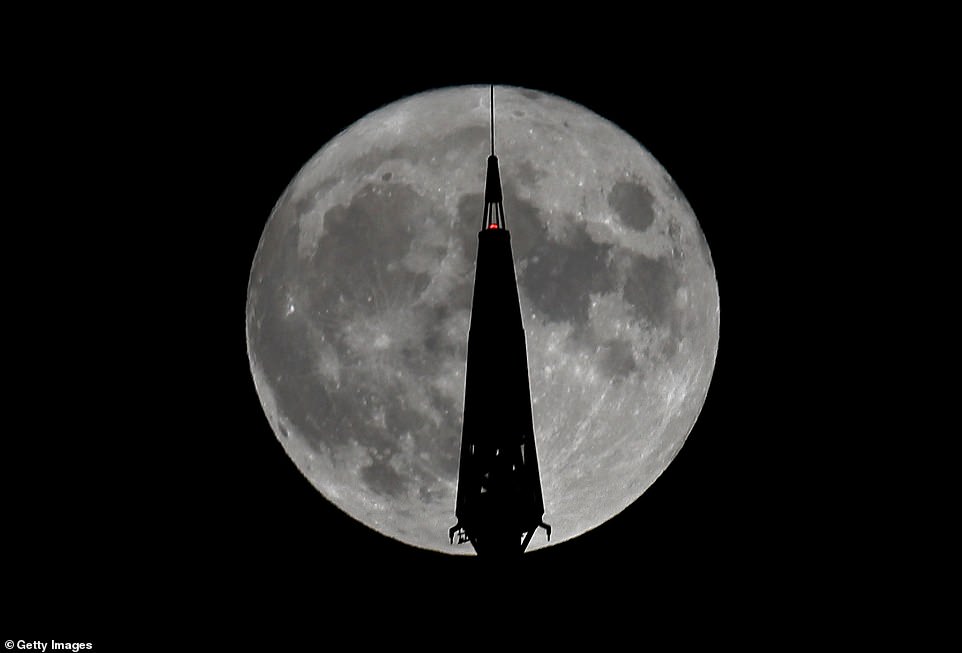 The full Harvest Moon rises behind the top of the antenna on One World Trade Center in New York City. This is the fourth full moon of summer this year, and will peak before the equinox actually happens, making it a summer moon 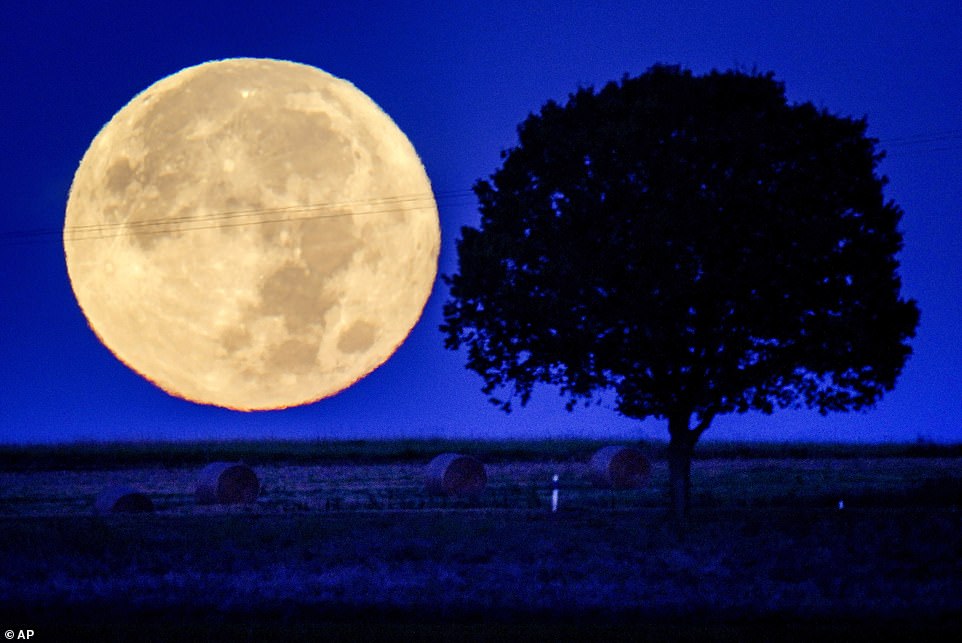 The full moon sets behind the hills of the Taunus region near Wehrheim, Germany. On average, the moon rises 50 minutes later than sunset each day, but when it is an equinox moon, it can rise as little as 25 minutes after sunset 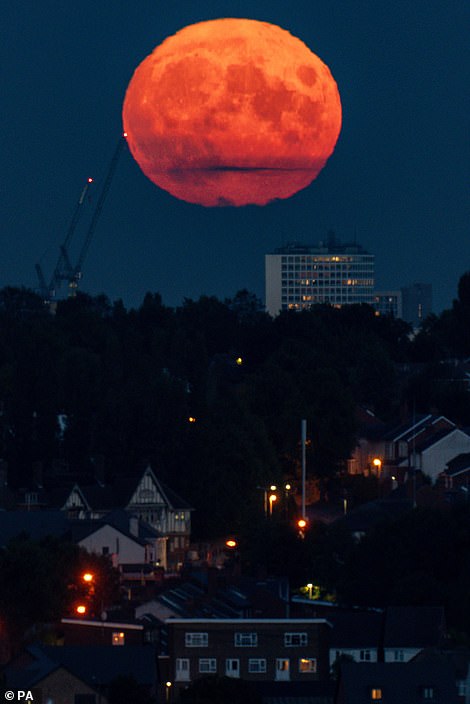 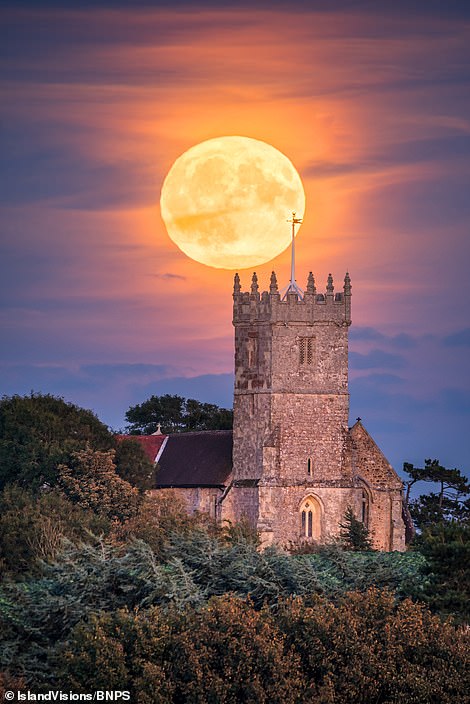 Stunning images of the Harvest Moon have been captured from around the world, including in the UK over Birmingham (left) and the Isle of Wight (right) 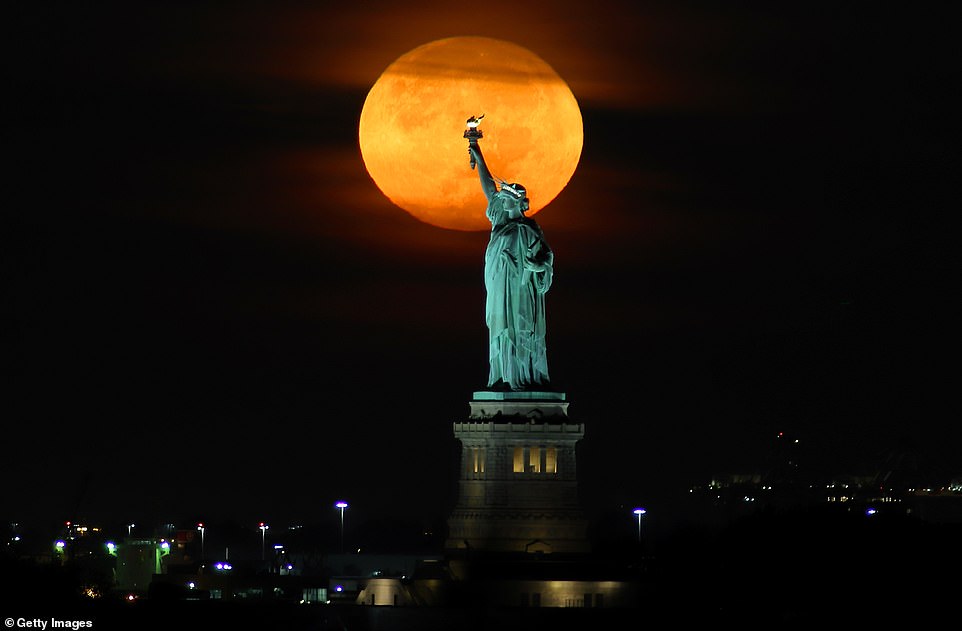 The Harvest Moon sets behind the Statue of Liberty before sunrise. The September full moon was named Harvest Moon in the 1700s when farmers depended on the glow of moonlight to harvest crops late at night 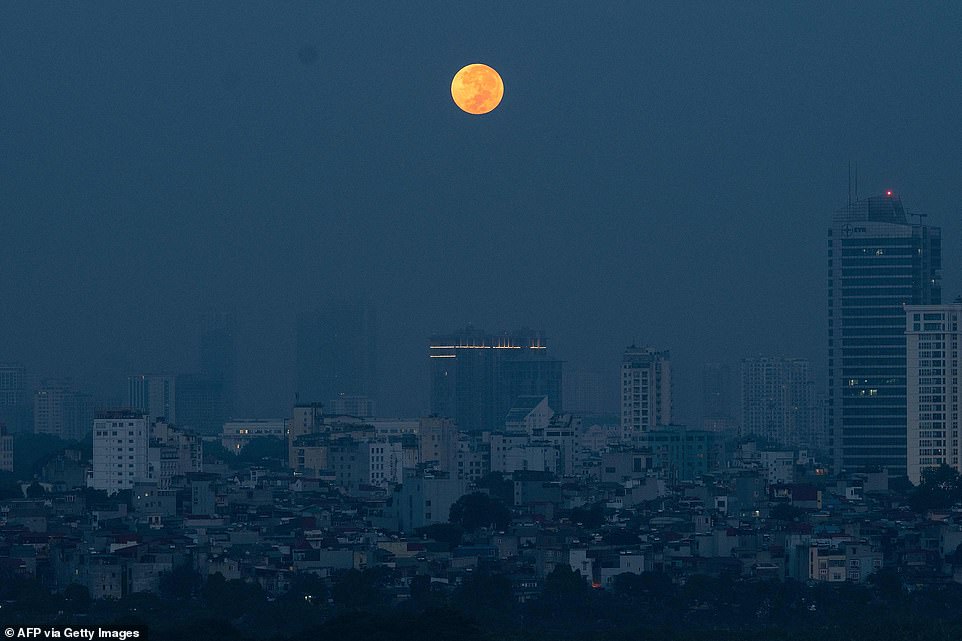 A full moon, also known as the ‘Harvest Moon’ is seen over the Hanoi skyline at dawn on September 21, 2021 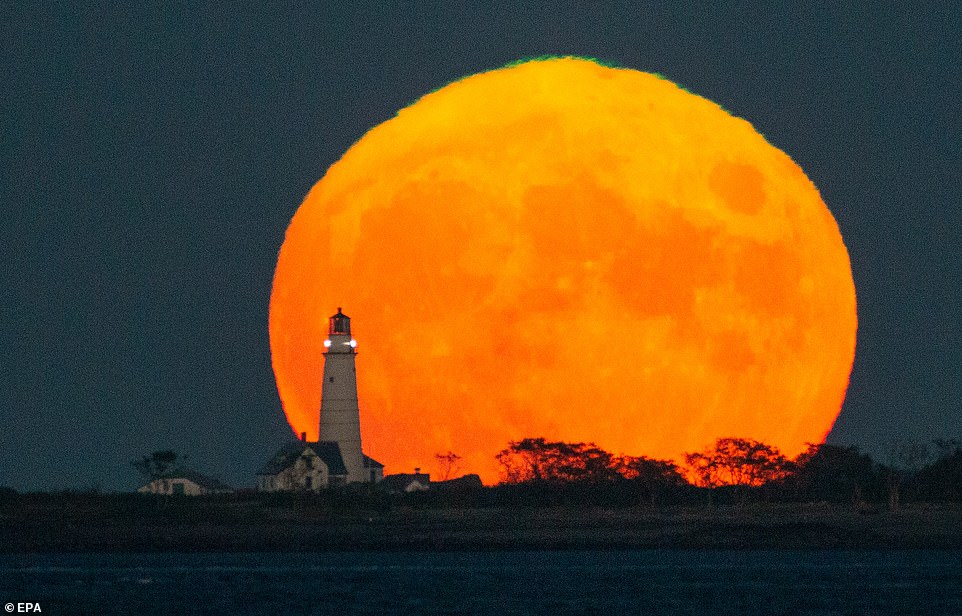 The Harvest Moon rises earlier, sets later and in some very northerly latitudes like Alaska, can remain full and bright for up to a week, often appearing bigger because people tend to view it closer to sunrise, as with this image from Boston, US

It provides dusk-til-dawn moonlight for several evenings in a row, making harvest time easier, and longer, for farmers – rising 30 minutes after sunset instead of the usual 50 for other moons, due to the equinox.

According to EarthSky: ‘For very high northern latitudes, there’s even less time between successive moonrises.

‘The farther north you live, the greater the Harvest Moon effect. For instance, at Anchorage, Alaska the moon will rise at nearly the same time for a week!’ 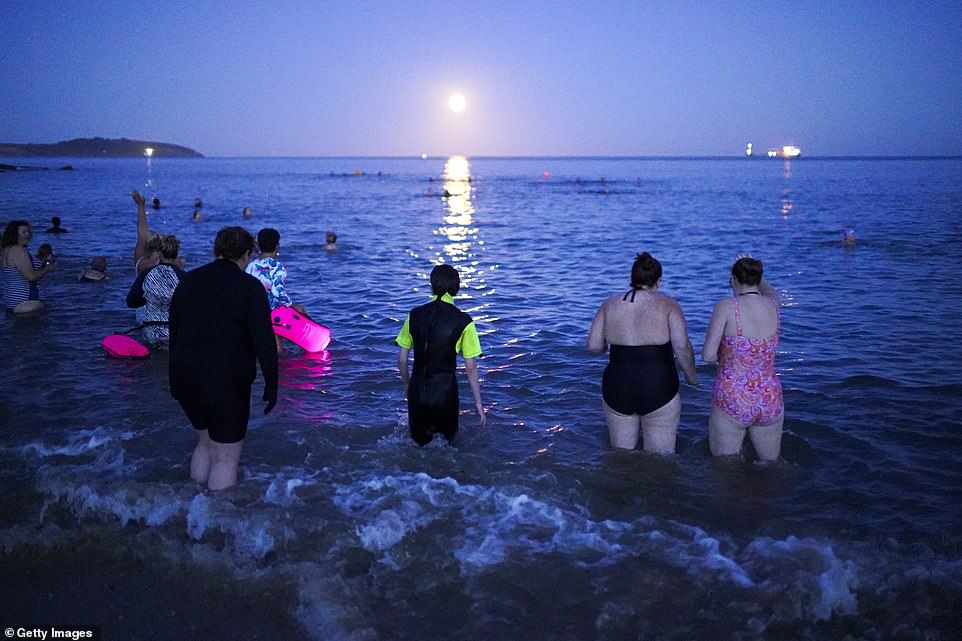 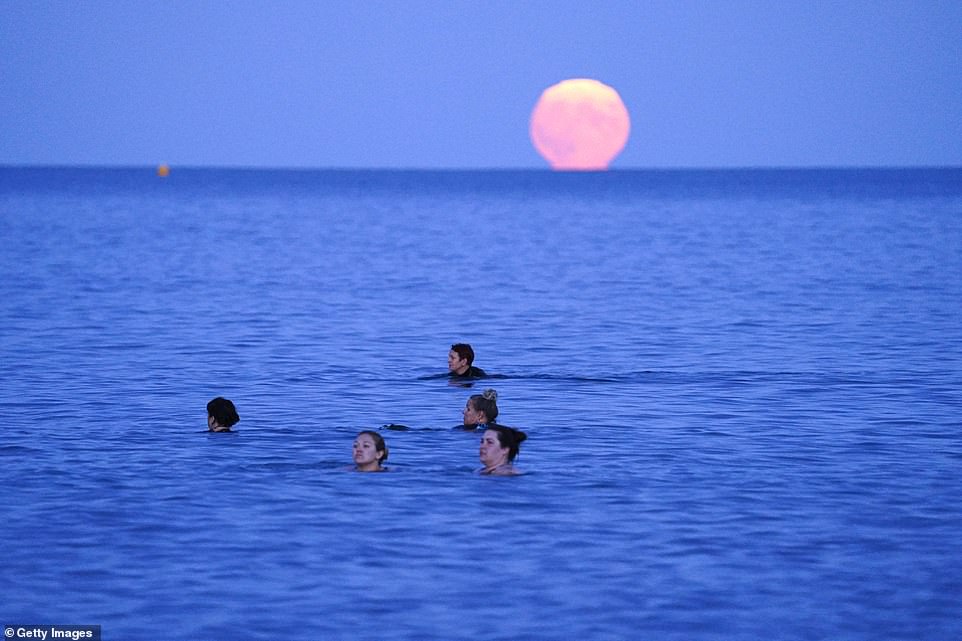 Swimmers took to the sea to swim under the Harvest Moon in Swanpool Beach, Falmouth, to mark the equinox 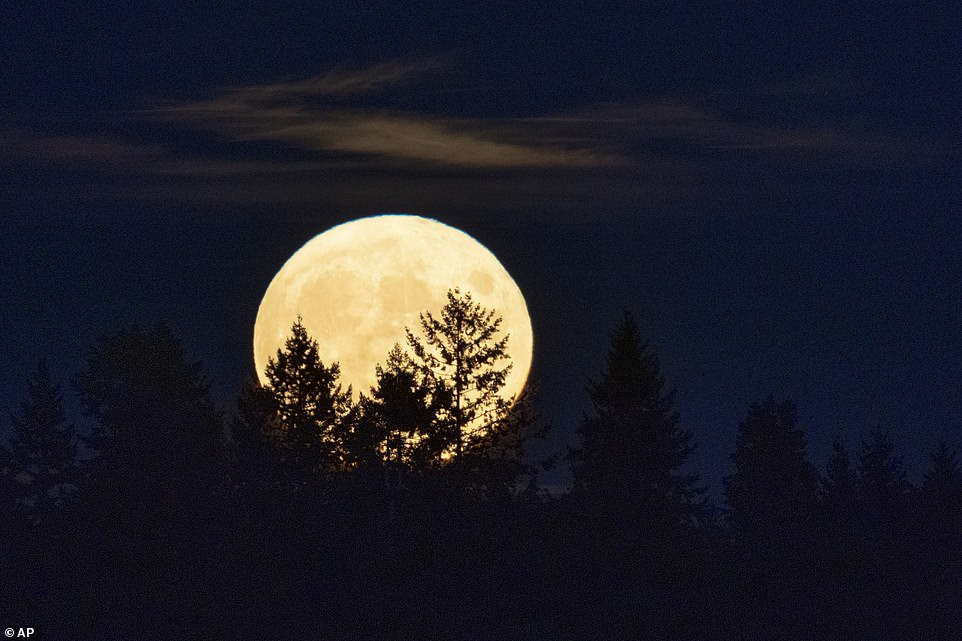 The full harvest moon rises Monday, September 20, 2021, as viewed from Olympia, Washington. The moon is the last full moon before the autumn equinox, which will take place Wednesday

While the Harvest Moon is no closer, and no different to the average full moon, many people view it soon after sunset, at a time when all full moons appear more orange.

TV presenter, author and world-class astronomer Mark Thompson said the best time to view a full moon was just after sunset as the gas and dust in the atmosphere will turn it an ‘eerie orange colour’.

‘To successfully capture lunar close-ups, a long lens is a must. Aspiring photographers should check out these expert tips from Canon for more advice,’ he advised. 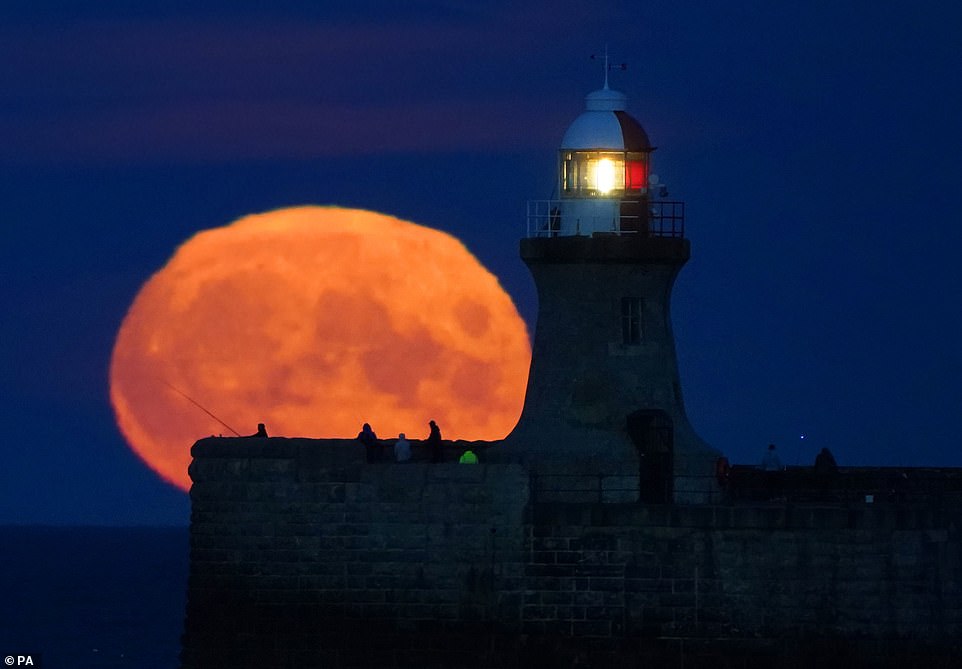 It can be a spectacular sight, although isn’t actually any larger, brighter or more orange than other full moons, it just appears that way, as with this view over South Shields lighthouse on the north east coast 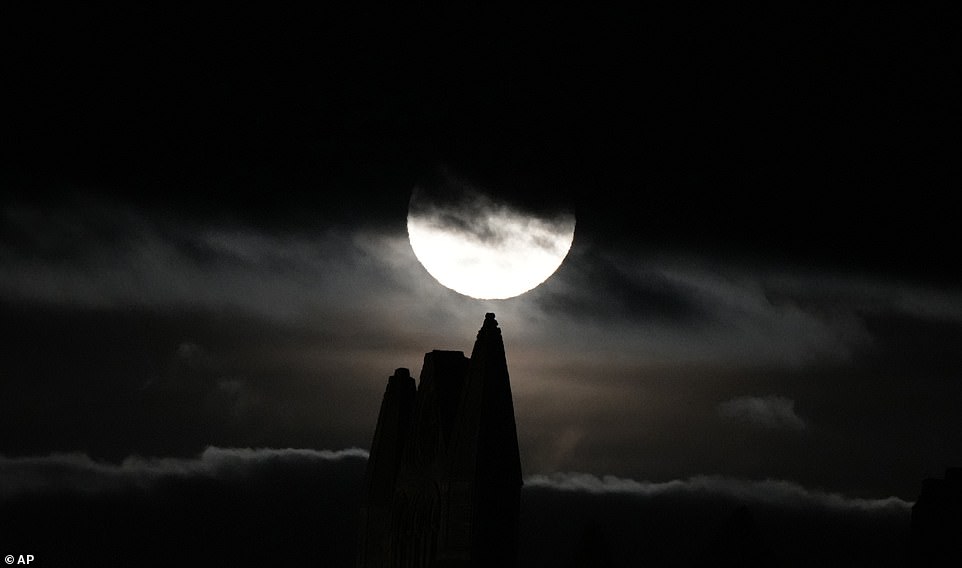 The full moon known as the Harvest moon rises over Whitby Abbey, in Whitby. Much of the UK was covered with clouds, obscuring the moon and giving it an eerie feel

This is because the Harvest Moon is always the one closest to the point of equinox, or the instant in time when the plane of Earth’s equator passes through the geometric center of the sun’s disk.

An equinox happens twice a year, around March 20 and again around September 23 – although this year it is on September 22.

It is the moment when the centre of the visible sun is directly above the equator.

FULL MOON NAMES AND THEIR MEANINGS

January: Wolf Moon because wolves were heard more often at this time.

April: Pink Moon as it heralded the appearance of Phlox subulata or moss pink – one of spring’s first flowers.

May: Flower Moon because of the abundance of blossoms.

June: Strawberry Moon because it appeared when the strawberry harvest first took place.

July: Buck Moon as it arrived when a male deer’s antlers were in full growth mode.

August: Sturgeon Moon after the large fish that was easily caught at this time.

September: Corn Moon because this was the time to harvest corn.

October: Hunter’s Moon after the time to hunt in preparation for winter.

November: Beaver Moon because it was the time to set up beaver traps.

December: Cold Moon because nights at this time of year were the longest.

Mount Everest has become an ‘open toilet,’ staggering amount of human waste found on its slopes