Britain’s longest serving Cornish pasty maker is finally retiring after 60 years – during which time he has crimped more than 15 million of them.

Charlie Choak, 75, has been making pasties since the age of five, when his mother would sit him on the kitchen counter and impart her wisdom on the perfect pasty technique.

The much-adored baker joined the family’s bakery at the age of 14 and took over the business from his parents around 55 years ago.

He would crimp up to 1,200 pasties on busy days while working a six day week – baking more than 15 million of the traditional Cornish refections during his long career. 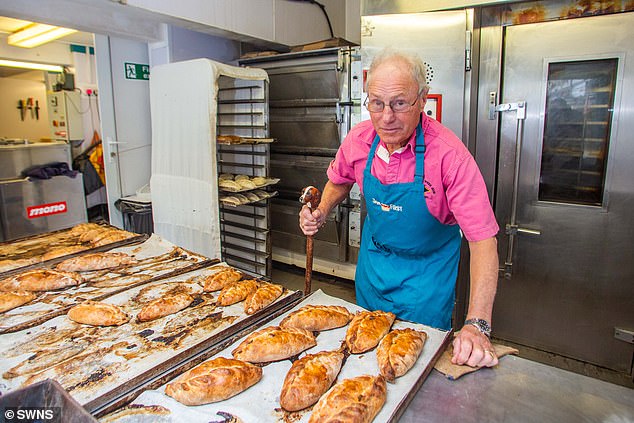 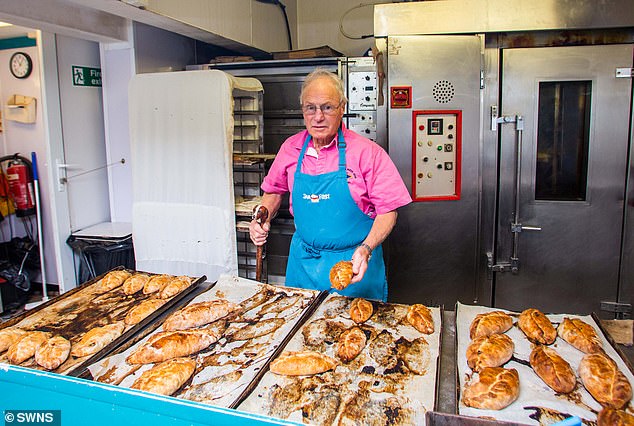 The industrious pasty maker would crimp up to 1,200 pasties on busy days while working a six day week

But he is finally shutting up shop and selling the building to a developer, as after more than half a century in the job he said he ‘has had enough’.

Unable to pass the business onto any other family members, Charlie says it is right time to sell Choak’s Bakery, in Falmouth, Cornwall.

Charlie, known to Falmouth locals as ‘Charlie Choak the pasty bloke’, said: ‘It would’ve been nice to carry the family business on but no one will take it so I don’t have a choice.

‘Fingers crossed the sale goes through – I’m tired and I’ve had enough.

‘When the shop was at its peak, which was usually on a Saturday, we used to make 1240 pasties – that is a lot of pasties.’

Charlie said he used to work at the bakery six days a week and revealed that as soon as he put the property on the market it sold ‘in a number of days’. The sale is expected to go through in about ten weeks.

Joseph, Magdalene and Charlie then moved to the site of what Charlie remembers as Ricky’s Café, which has remained the home of Choak’s since 1960.

He said: ‘Years ago, I used to be the only person making pasties but now loads are making them, its all changed quite a bit.

‘Of course we make the best pasties in Cornwall. Without a doubt. 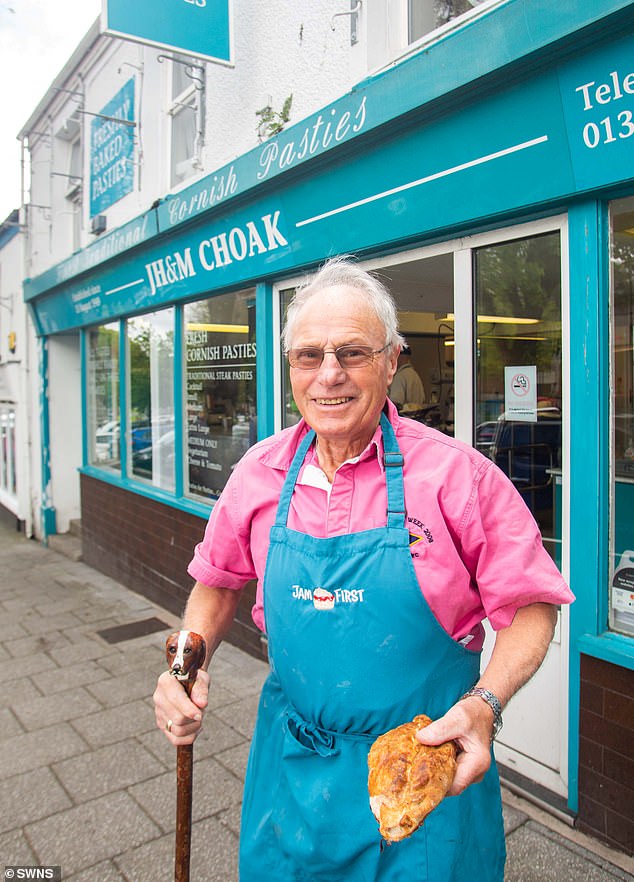 The pasty-expert refused to reveal his ‘secret ingredient’ that he says makes his pasties the ‘best in the country’, and will take the secret to his grave

‘As far as I’m concerned, they’ll carry on making them forever but they will never be as good as ours.

‘Pasties are very important here – people come from all over the world to try a classic Cornish pasty, and there really is nothing like it.

‘You can’t call them Cornish pasties unless they are made in Cornwall though, that’s just fact’.

When describing the perfect pasty-making process, Charlie admitted his pasties only take an hour to bake, and 10 minutes to prep, and the sage onion, meat and rutabagas (a root vegetable similar to turnips) are critical ingredients.

However, the pasty-expert refused to reveal his ‘secret ingredient’ that he says makes his pasties the ‘best in the country’, and will take the secret to his grave.

Charlie said he crimps the pasties around the top at Choaks, because his mother, who used to live in west Cornwall always crimped her pasties on the top.

But his grandmother, who lived in North Cornwall, always crimped the pasty on the side.

He added: ‘The traditional way is to crimp around the sides, because the miners used to hold the pasty in their hands to eat it and throw the crimp away due to the arsenic on their fingers – a horrible thing that would ruin the taste.

‘They used to make them with mince lamb and mutton after the war – back in the good old days’.

Charlie admitted that after retirement he will not be making any pasties for himself or his family in the near future, not because he is sick of them, but he’s ‘just got better things to do’.

Charlie, who resides in Falmouth with his beloved cockerpoo Coco Chanel, said: ‘I have no regrets and am grateful for the experiences I’ve made.

‘I’m very grateful for the customers we had at Choak’s – they got me to where I am today.

‘I shouldn’t say this but now we’re closing, I don’t have much hope for Cornish pasties.

‘Long may Choak’s famous pasties rest in peace – and in the hearts and minds of all those who tried his famous delicacies.’

The bakery was also the first in the area to have an open window to the passing public, which Charlie says always grabs the attention of onlookers.

The inspiration behind the layout came from a trip his parents took to Scotland, which is where Joseph Choak’s wife, Magdalene, was from.

The news has been greeted with sadness on Facebook, with people saying that they are ‘devastated’ at the closure.

One local said: ‘My first job whilst at school from the age of 14 to 21. So sad to hear its closing. Charlie was a great boss.’

Others expressed their despair, saying Falmouth is ‘doomed’ and ‘it’s sad that it’s another family business has been lost’.