Brazilian authorities have opened a probe into a government-operated payments system that was used by supporters of former far-right President Jair Bolsonaro to crowdfund last week’s insurrection.

Law enforcement has been working to identify the election deniers who used Pix to organized the January 8 invasion of the presidential palace, Supreme Court and Congress in the capital city of Brasilia.

‘We have a secure and consistent line of investigation focused on tracking financial movements undertaken via Pix,’ a senior federal police officer, who is part of the investigation, told Reuters. ‘The financiers’ time is up.’

Police arrested 1,398 rioters, who have been charged with crimes that include terrorism and attempting to stage a coup.

The Supreme Court and Justice Ministry will be looking to present similar charges against those who allegedly financed the invasion. 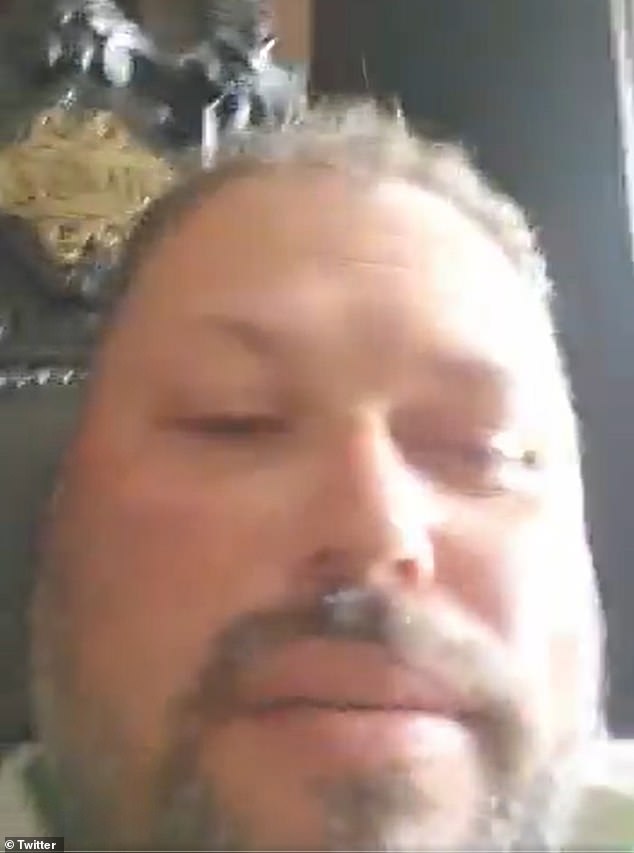 Samuel Faria, a resident from the southern state of São Paulo, recorded himself claiming to have financially backed the January 8th insurrection at the Brazilian presidential palace, Supreme Court and Congress. Faria, a supporter of former President Jair Bolsonaro, claimed to have received donations via Pix, a government-run instant payment system. At least 1,398 rioters have been charged with crimes that include terrorism and attempting to stage a coup 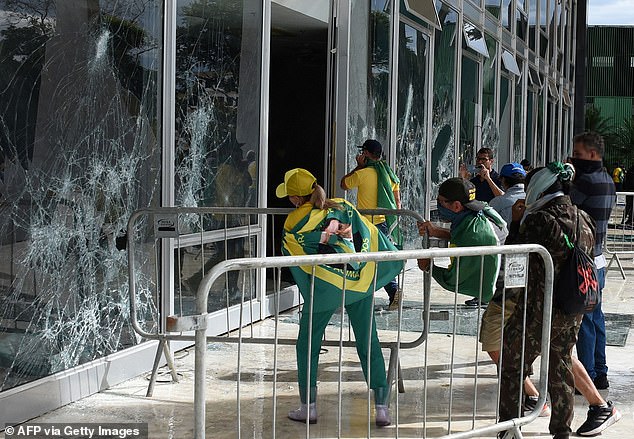 Samuel Faria, a resident from the São Paulo city of Socorro, recorded himself sitting on the Senate president’s chair and bragging about leading insurrectionists into the government building just a week after the inauguration of leftist President Luiz Inacio Lula da Silva, who beat out Bolsonaro in a runoff October 30.

‘Money is in the account,’ Faria says in Portuguese. ‘Thank you patriotic friends, people from Amparo, they helped us there, many friends sponsored us there on Pix.’

As of Monday, Faria had not been arrested for his alleged role in the invasion.

Pix, which was introduced in November 2020 and is run by the federal government, allows users to instantly transfer money to other individuals through online banking app without any cost.

The payment system is used by ‘beggars and billionaires,’ according to Reuters, to transfer around $3 trillion and outpaced debit and credit card payments last year. More than 133 million users and close to 12 million businesses utilize Pix for bank transfers, according to the central bank.

However, Pix has also used to spearhead the agenda driven by Bolsonaro’s hardcore follwers, who promote their Pix ‘keys’ on YouTube videos and Instagram livestreams, asking followers to send instant contributions to their bank accounts.

Enzo Leonardo Suzin, a conservative YouTuber known as Enzuh, told Reuters that most of his income still came from ads, but Pix contributions now represented up to 20% of revenue.

‘I always used crowdfunding to improve the quality of the channel,’ said Suzin, who was targeted in 2020 by a Supreme Court probe into alleged fake news but has never been charged.

Pix has become ubiquitous thanks to the fact it is free and instantaneous. Its reach has been a boon to fundraisers, who can easily receive transfers from across Brazil.

After Lula’s win, Suzin had noticed Pix becoming widely used by the hardcore Bolsonaro supporters pressing for a coup in encampments outside military bases across Brazil, including the army headquarters in Brasilia.

Many of them had paused their lives and were using social media to solicit contributions from like-minded ‘patriots’.

‘Many influencers and some everyday folks there financed themselves exclusively via Pix,’ Suzin said. 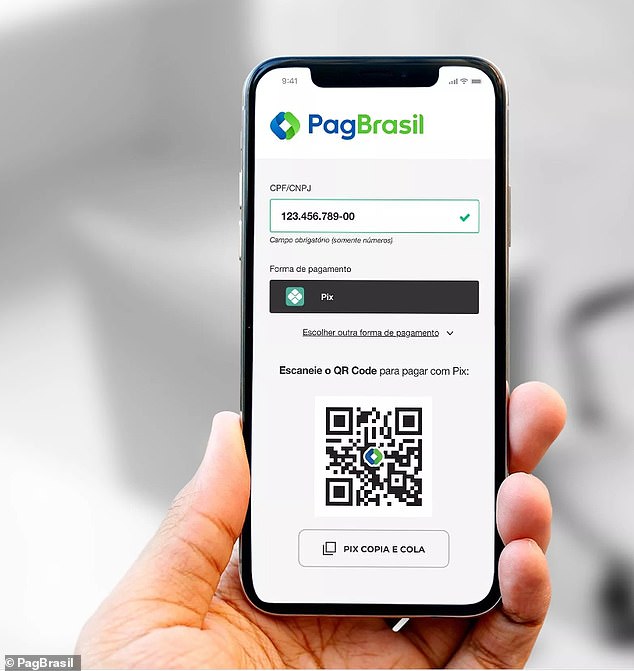 Brazil’s central bank launched Pix, an app where people can instantly wire money – free of charge – to other individuals. The payment system was used by supporters of former President Jair Bolsonaro to bankroll the January 8th insurrection

Law enforcement, central bank officials and money-laundering experts said Pix donations will be crucial to investigators’ efforts to uncover who orchestrated the insurrection.

Surveillance video obtained by Brazilian news magazine Fantastico showed one of the rioters knocking a 17th century grandfather clock to the ground.

The Balthazar Martinot timepiece was gifted by French King Louis XIV to Portuguese King Dom João VI, who ruled Brazil and Portugal, and is only one of two that exist in the world.

The clock was left beyond repair, according to the authorities. 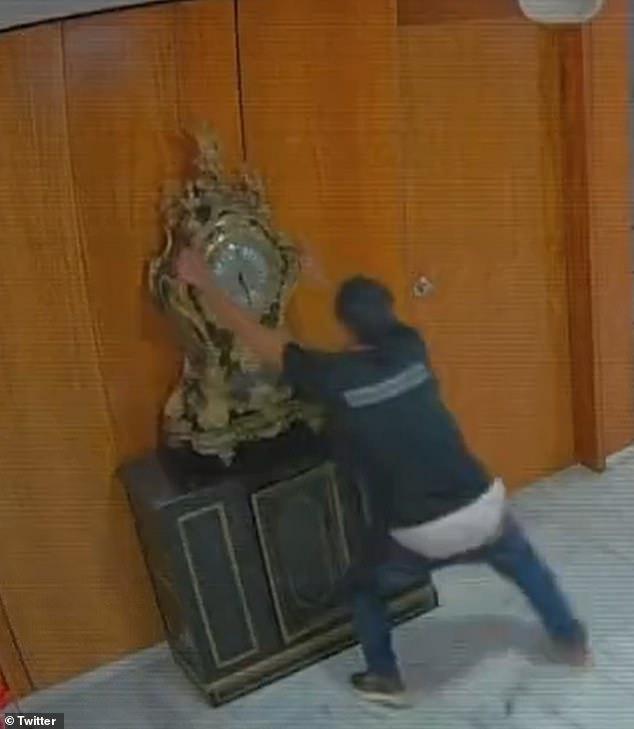 A rioter was caught on camera destroying the 17th century grandfather clock that was gifted by French King Louis XIV to Portuguese King Dom João VI, who ruled Brazil and Portugal

Footage showed an insurrectionist approach the $1.5 million As Mulatas oil on canvas painting and stab at the artwork.

The painting is considered one of the most important pieces produced by Brazilian modernist painter Emiliano Di Calvacanti and was punctured seven times.

‘It’s an extremely powerful tool within that investigative context, and I have no doubt it will be used,’ said Bernardo Mota, a former official at the Council for Financial Activities Control (Coaf), Brazil’s financial intelligence unit. 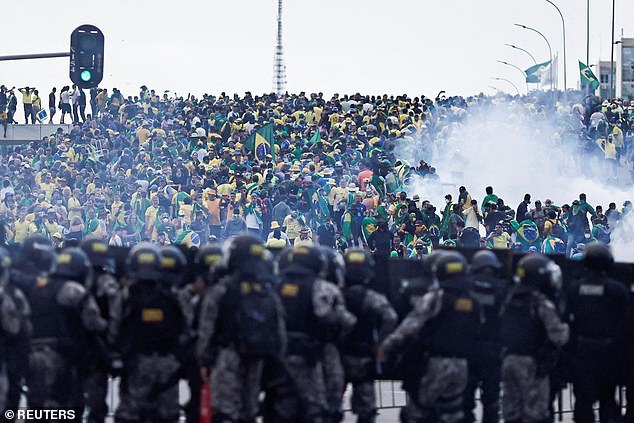 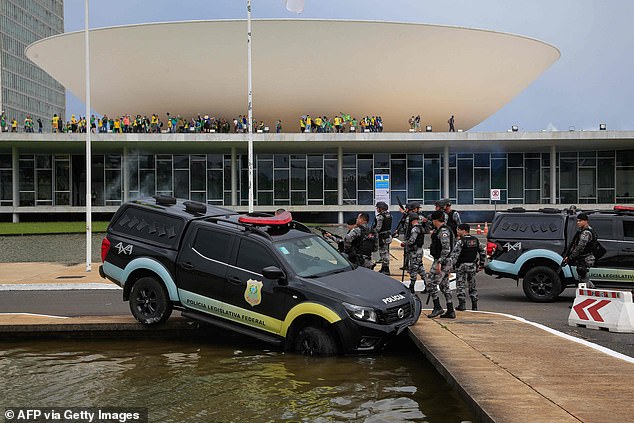 Transfers made via Pix are protected by bank secrecy laws, and authorities can only access a suspect’s transaction history through a court order.

Although Pix does not offer more traceability than previous systems, experts said the fact it is administered by the central bank removes a layer of bureaucracy, allowing investigators to sidestep dealing with private banks.

That is particularly useful in an investigation such as this one, Mota said, with a need to quickly trace what could be hundreds or even thousands of different financiers cross Brazil.

One of the most common types of Pix key is a person’s phone number, offering investigators a shortcut to seek wiretaps and subpoena chat records.

The central bank said in a statement that ‘all Pix operations are traceable,’ adding that it ‘always works closely with the competent authorities in the investigation of any crimes involving the financial system.’

Pix has its investigative drawbacks, experts said. With a growing share of daily transactions now carried out over the system, it may be time-consuming for investigators to separate suspicious transfers from everyday spending.

A current central bank official said a slew of new financial technology companies and digital payment processors had increased access to banking in Brazil, while also making it easier to open an account with little or even false information.

With Pix, protestors could ‘gather resources for everything we needed,’ said Oswaldo Eustaquio, another high-profile Bolsonarista, told Reuters. ‘Money was never a problem for us.’

Wis. College Student Called 911 While Being Stabbed to Death in 2008, and Killer Was Just Arrested