Boy, 17, dies of heat exhaustion in Spain as the country battles wildfires and the rest of Europe sizzles in Saharan Bubble heatwave – with France set for its hottest day ever with record temperatures of up to 113F

A 17-year-old boy has died of heat exhaustion in the early hours in Spain as Europe continues to fry in baking temperatures.

The child was rushed to hospital in the southern city of Cordoba after collapsing while he worked in the countryside.

Officials said he felt dizzy and jumped into the swimming pool at the property where he was working. 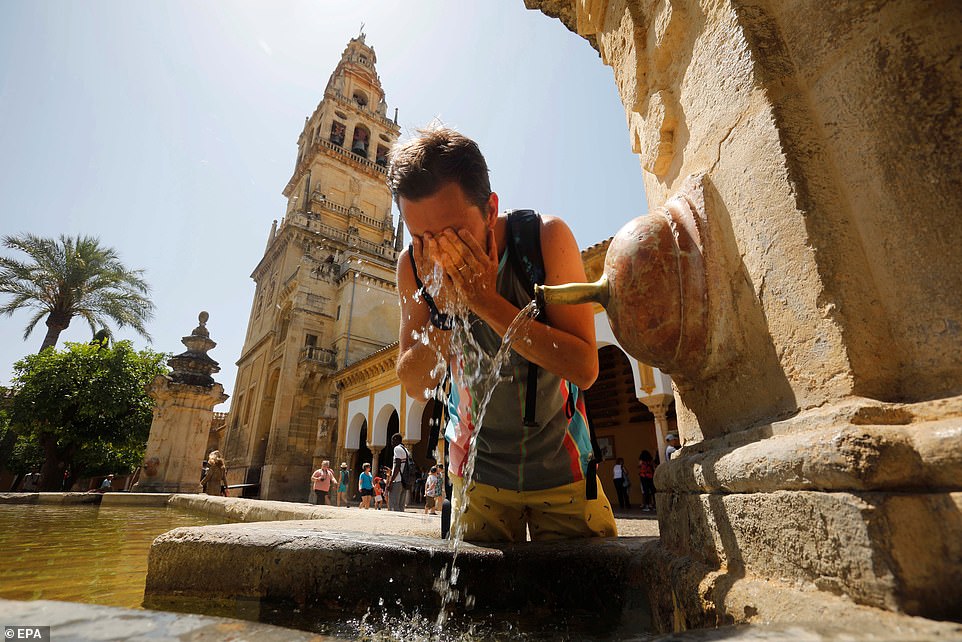 The death comes as Europe is set to face sizzling heat on Friday, with wildfires in Spain and record-breaking temperatures expected for France. Pictured: A tourist refreshes himself at a fountain in Los Naranjos courtyard of the Mosque-Cathedral of Cordoba, on Thursday

The death comes as Europe is set to face sizzling heat on Friday, with wildfires in Spain and record-breaking temperatures expected for France as the Saharan Bubble comes to a boil.

The unnamed teenager, who was from the village of Castro del Rio in Cordoba province which is famed for its olive oil and furniture made from olive oil, died at 1.25am at Cordoba’s Reina Sofia Hospital.

The regional Junta de Andalucia government said it ‘regretted the youngster’s death and sent its condolences to his family and friends for their loss’ in a statement. 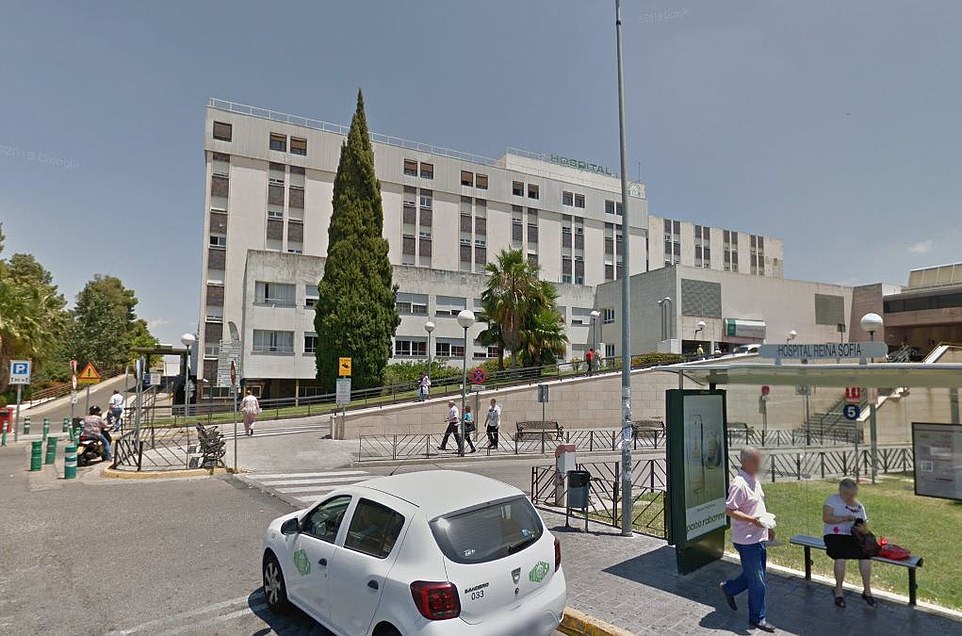 The unnamed teenager, who was from the village of Castro del Rio in Cordoba province which is famed for its olive oil and furniture made from olive oil, died at 1.25am at Cordoba’s Reina Sofia Hospital (pictured)

The death of an 80-year-old man in Valladolid, northern Spain, has also been blamed on the heat.

He had been walking to the dentist’s when he collapsed around 6pm on Thursday in the city centre.

Police sources said they believed he had been wearing too many clothes for the 99F (37C) temperature at the time.

A 50-year-old who was working in the countryside has also been hospitalised in Murcia in south-east Spain after falling ill.

He was taken to hospital from a health centre and his condition has been described as serious and he is in intensive care.

Police and Civil Guard in Montuiri in Majorca are also investigating whether a 60-year-old Argentinian’s death is the result of a heatwave.

The results of a post-mortem due to be carried out on Thursday have not yet been released. 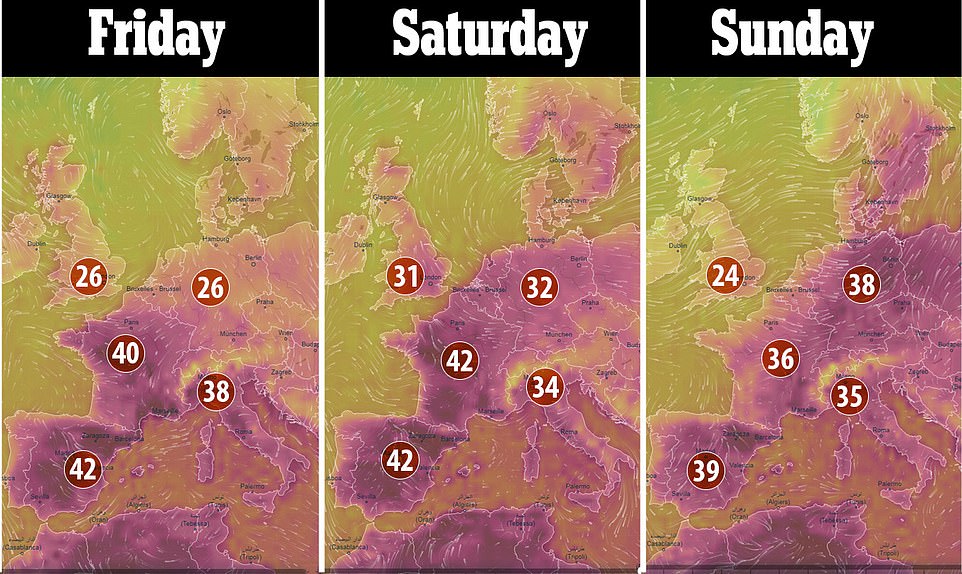 As many as 33 of the 50 Spanish provinces face extreme temperatures, which could reach 111F (44C) in Girona.

Governments warned citizens to take extra precautions, with the week-long heatwave causing a build-up of pollution and fears of an increase in emergency calls across Europe.

French meteorologists have forecast temperatures that may exceed 113F (45C) on Friday – a high never seen in mainland France. 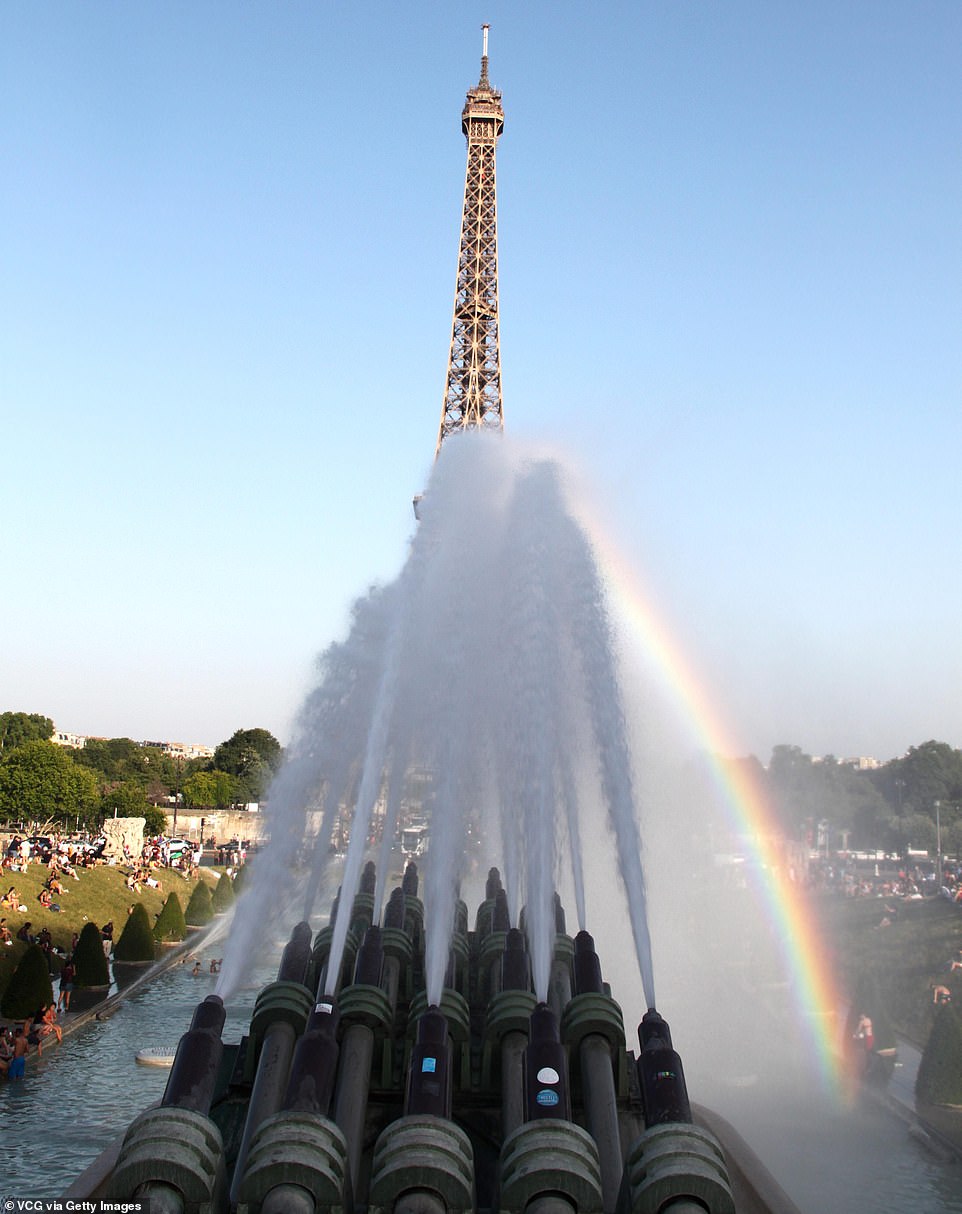 The country has issued red heatwave alerts for the first time ever as southern regions brace for the weather.

Its national weather service upped the alert level from orange for the departments of Herault, Gard, Vaucluse and Bouches-du-Rhone warning ‘all members of the public should be concerned, even if they are in good health’.

A large area of southern France has been issued with a red alert – indicating a ‘dangerous weather phenomenon’ – for the first time since the warning system was brought in in 2004. 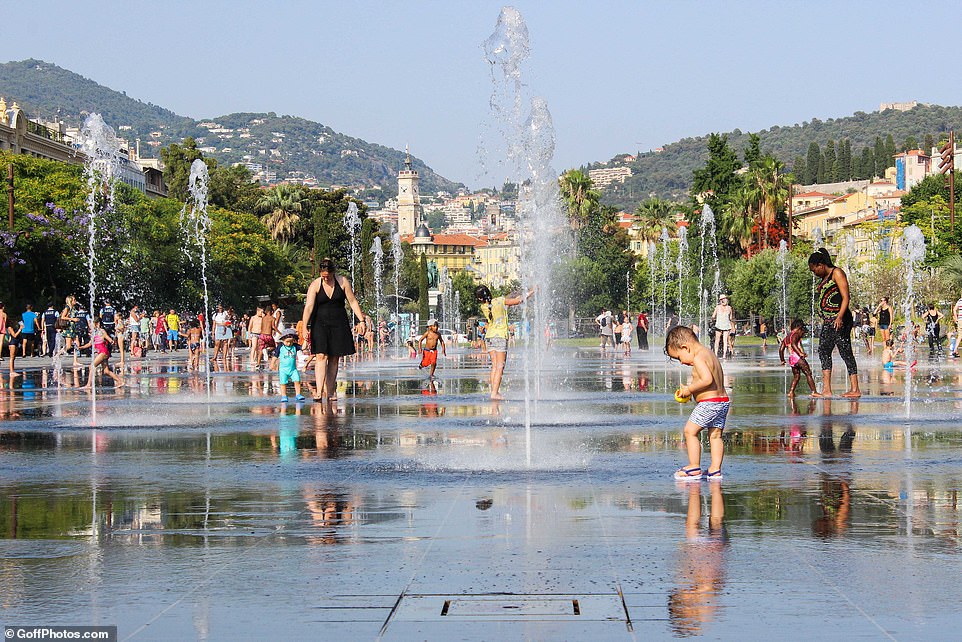 The country has issued red heatwave alerts for the first time ever as southern regions brace for the weather. Pictured: tourists and dwellers of Nice refresh themselves in a fountain

However, French winemakers have welcomed the heat, saying weather could produce a superior vintage.

France’s current record was set in August 2003 in the southern region of Montpellier and Nimes, when the thermometer hit 111F (44C).

Meteorologist Christelle Robert said: ‘To beat this record so early in the year would be exceptional.’ 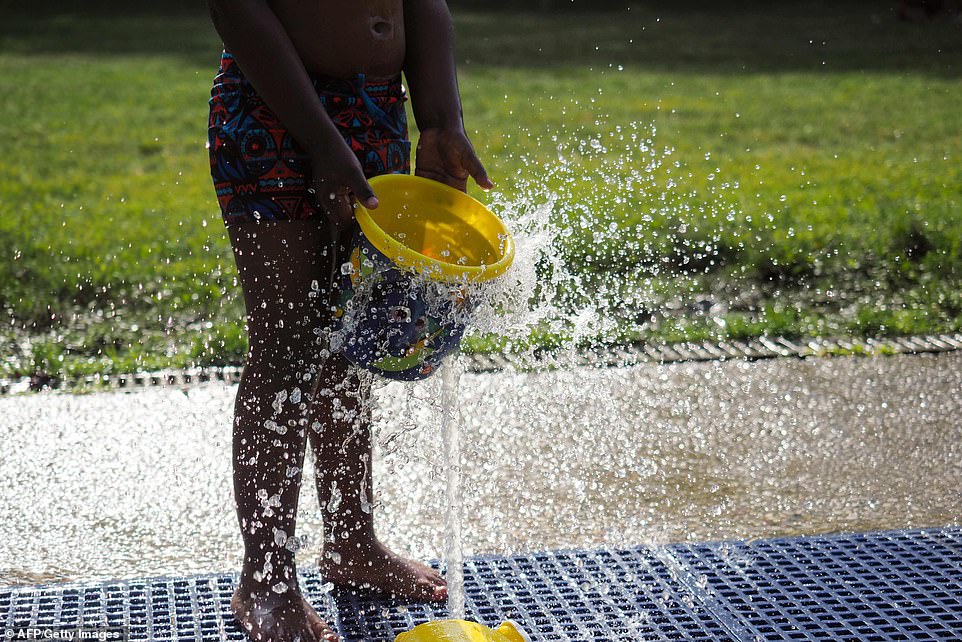 A large area of southern France has been issued with a red alert – indicating a ‘dangerous weather phenomenon’ – for the first time since the warning system was brought in in 2004. Pictured: A young boy holds a bucket as he plays with water at a public fountain in Tours on Thursday

The average maximum temperature recorded in France on Wednesday of 95F (35C) was already a record for the month of June, said state weather forecaster Meteo France.

French President Emmanuel Macron warned that such extreme weather is likely to become more frequent as a result of global warming.

‘We will need to change our set-up, our way of working, build differently,’ he said, stressing a necessary ‘adaption of society and its habits.’ 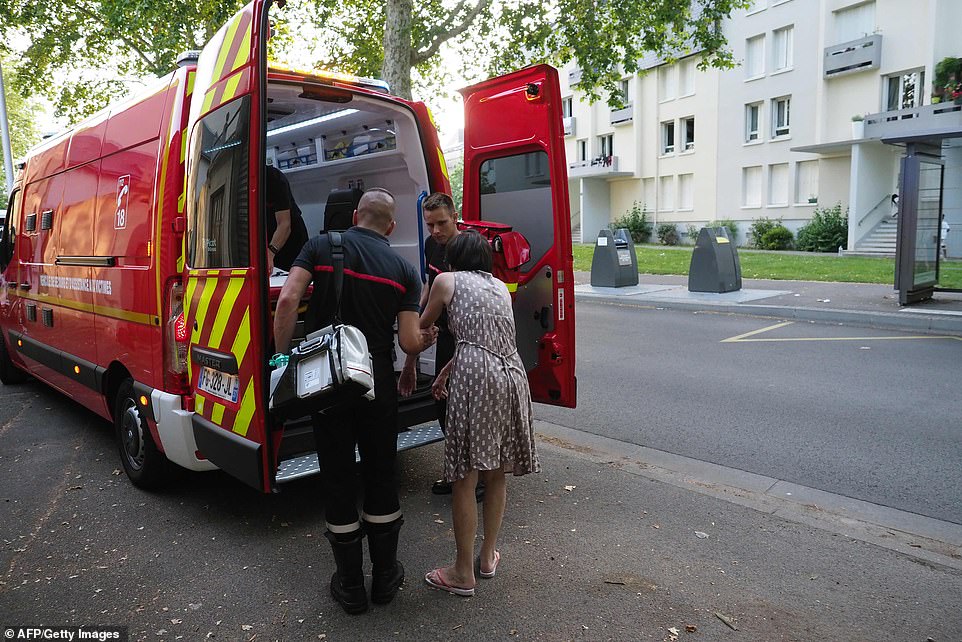 The average maximum temperature recorded in France on Wednesday of 95F (35C) was already a record for the month of June, said state weather forecaster Meteo France. Pictured: Firefighters assist a woman suffering from the heat in Tours on Thursday

French Health Minister Agnes Buzyn said on Thursday people had to be prepared for the peak of the heatwave and expressed irritation that some appeared not to be listening to advice.

She complained about parents leaving their children in the car and joggers exercising in the midday heat.

The warning came as Spain continued to battle fierce forest fires brought about by the extreme heat – with farm animals roasting alive.

Blazes have also broken out in Greece and Germany as Europe suffers through an ‘unprecedented’ spell of June heat. 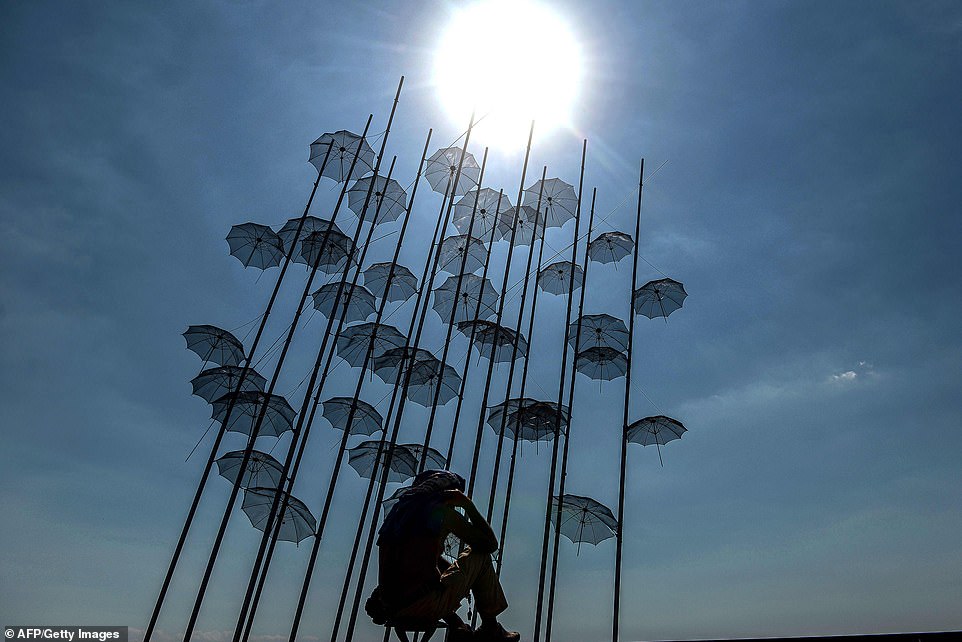 Blazes have also broken out in Greece (pictured, a man sits near the iconic installation ‘Umbrellas’ by Greek sculptor, painter and architect George Zongolopoulos in Thessaloniki on Thursday) and Germany as Europe suffers through an ‘unprecedented’ spell of June heat

On Wednesday Germany, Poland and the Czech Republic recorded their highest-ever June temperatures.

The worst wildfire, in Torre del Espanol in Spain’s northeastern Catalonia region, raged out of control, devouring land despite the efforts of hundreds of firefighters and soldiers. 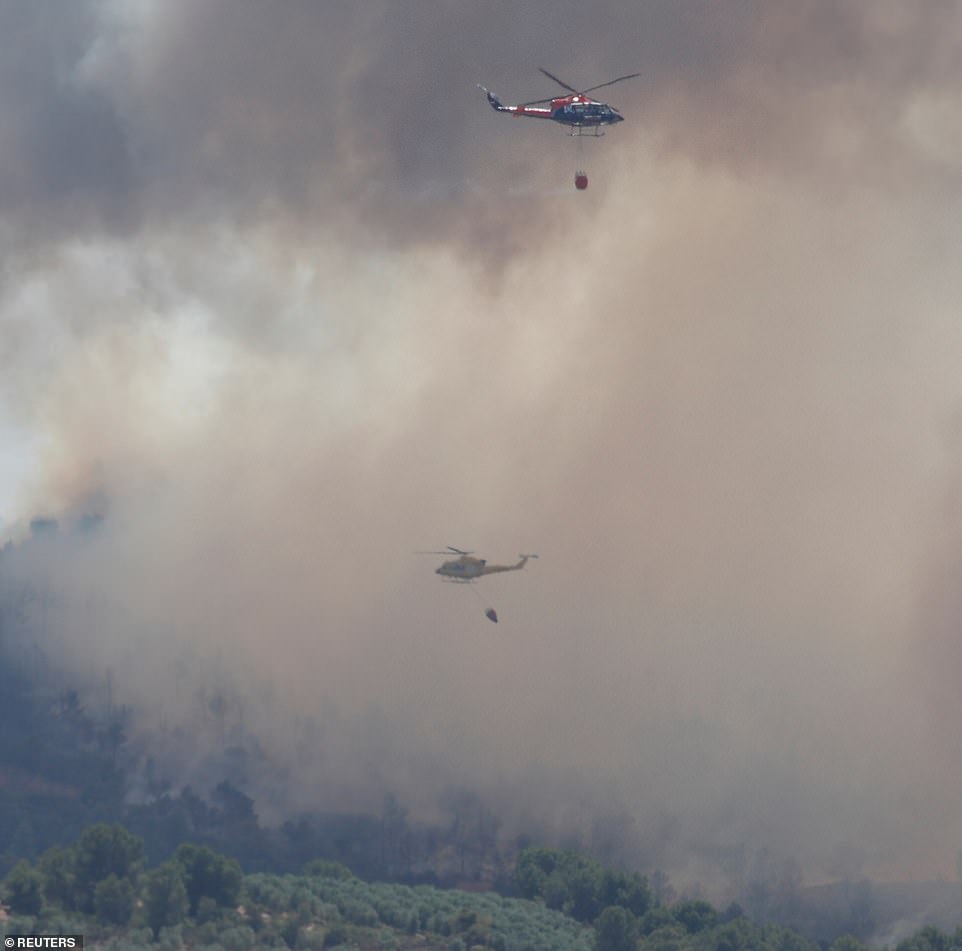 Helicopters drop water over a fire during a forest fire near Bovera, west of Tarragona, Spain. Officials said yesterday the blaze, fanned by hot winds, was ‘out of control’ 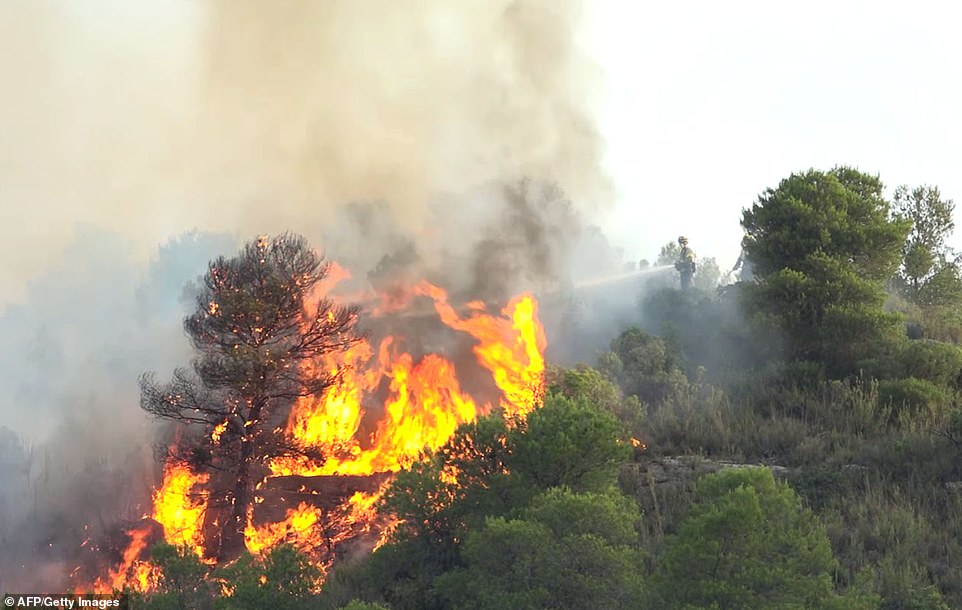 A forest fire in Spain raged out of control on Thursday amid a Europe-wide heatwave, devouring land despite the efforts of hundreds of firefighters who worked through the night, local authorities said 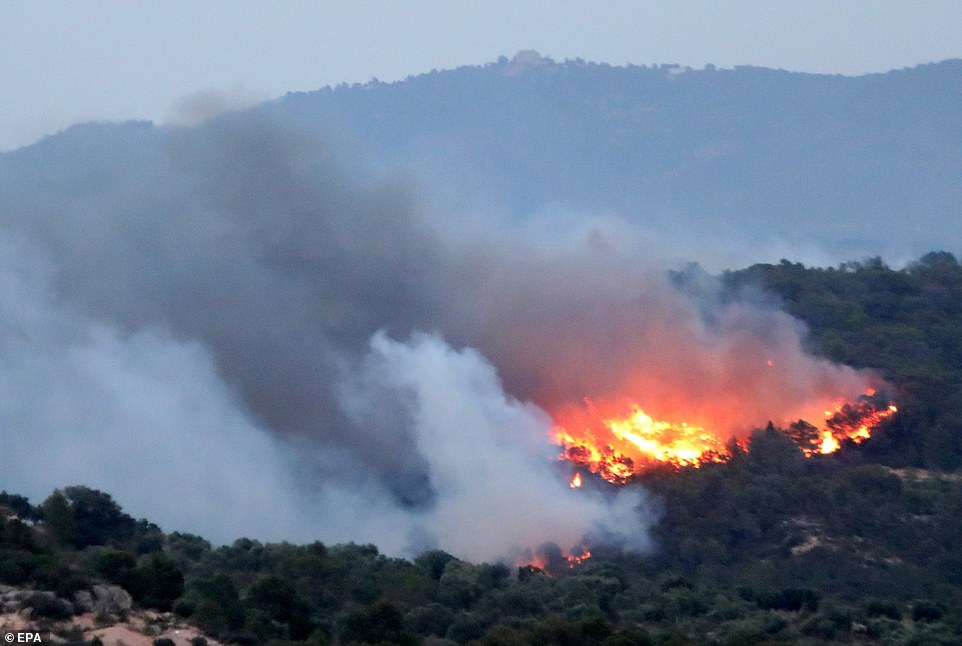 Catalonia’s forest agent service said the fire likely began when an ‘improperly managed’ pile of manure at a chicken farm self-combusted under the sun.

Some 350 firefighters backed by around 230 soldiers and 15 aerial tanker aircraft were at the scene of the blaze on Thursday.

But officials have admitted the fire – fanned by strong winds and soaring temperatures – was ‘getting bigger’ and warned it could eventually destroy 20,000 hectares in what presented an ‘extreme risk.’ 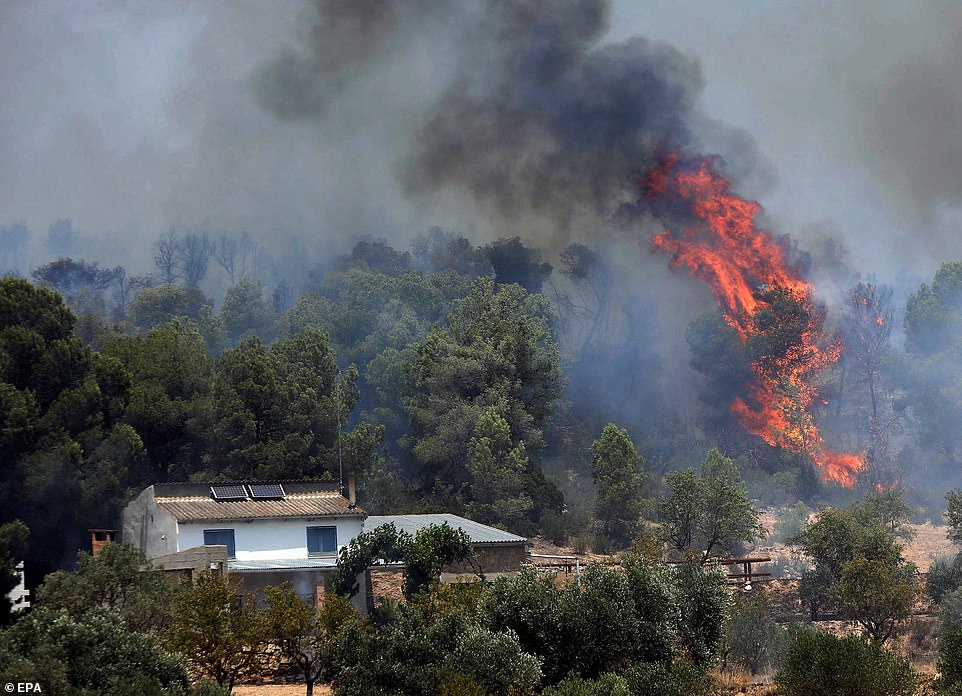 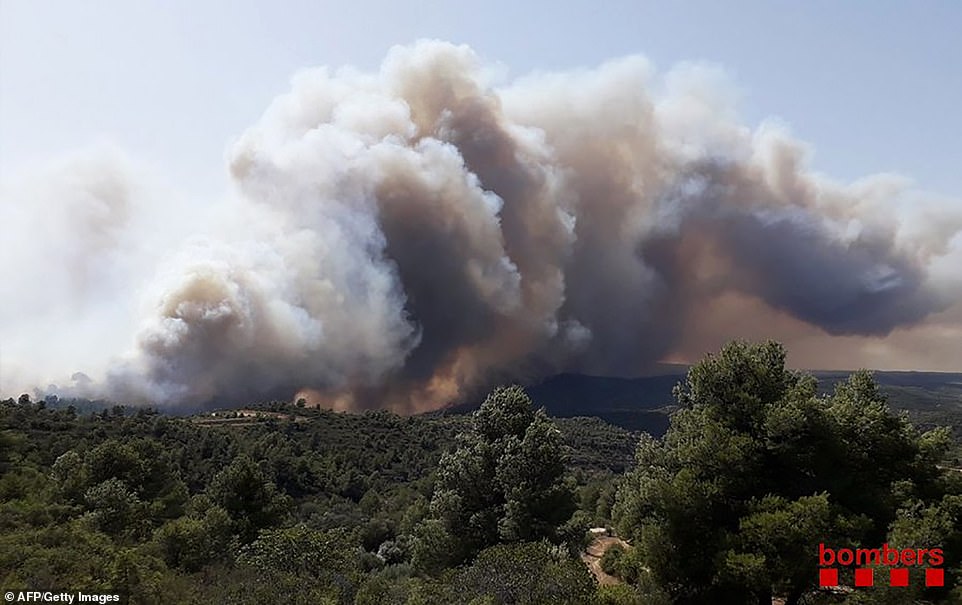 The blaze broke out on Wednesday afternoon in Torre del Espanol in the northeastern region of Catalonia and by Thursday it had destroyed more than 4,000 hectares (10,000 acres), the region’s interior minister Miquel Buch said 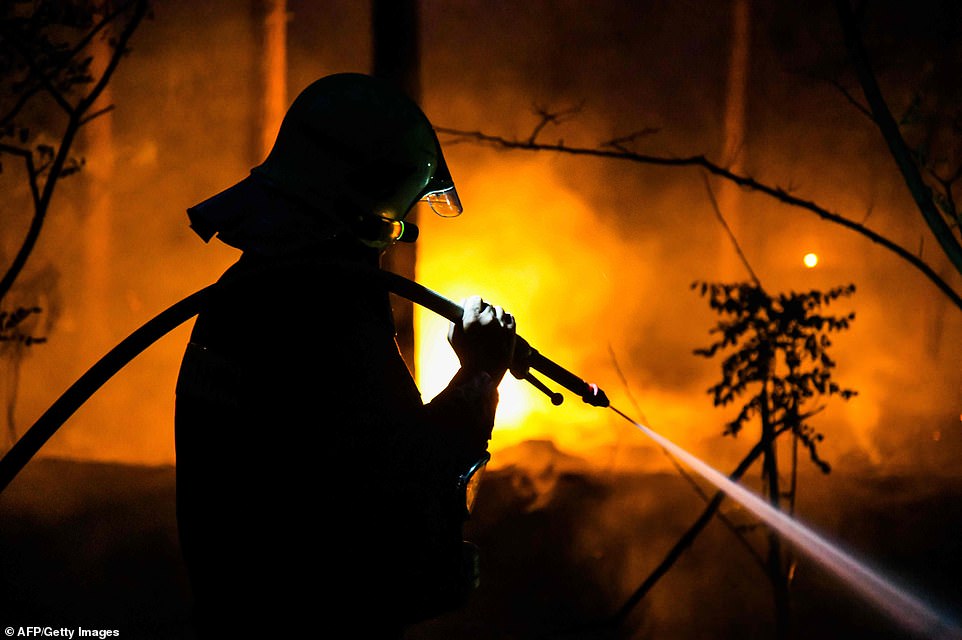 A fireman works on the extinguishing of a forest fire in Ziltendorf near Frankfurt an der Oder, northeastern Germany, close to the border with Poland. Wild fires have broken out amid stifling conditions in the country 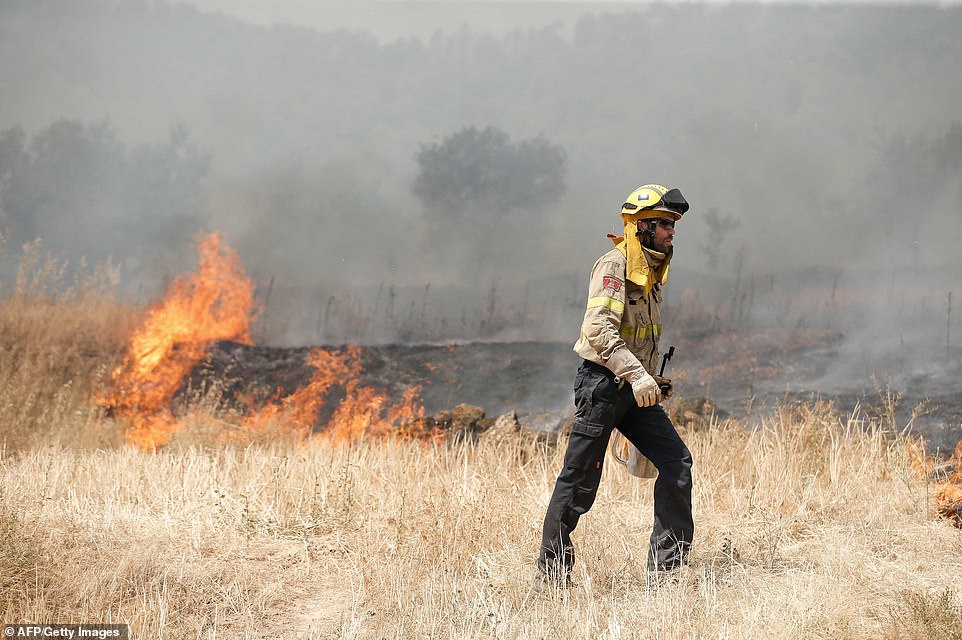 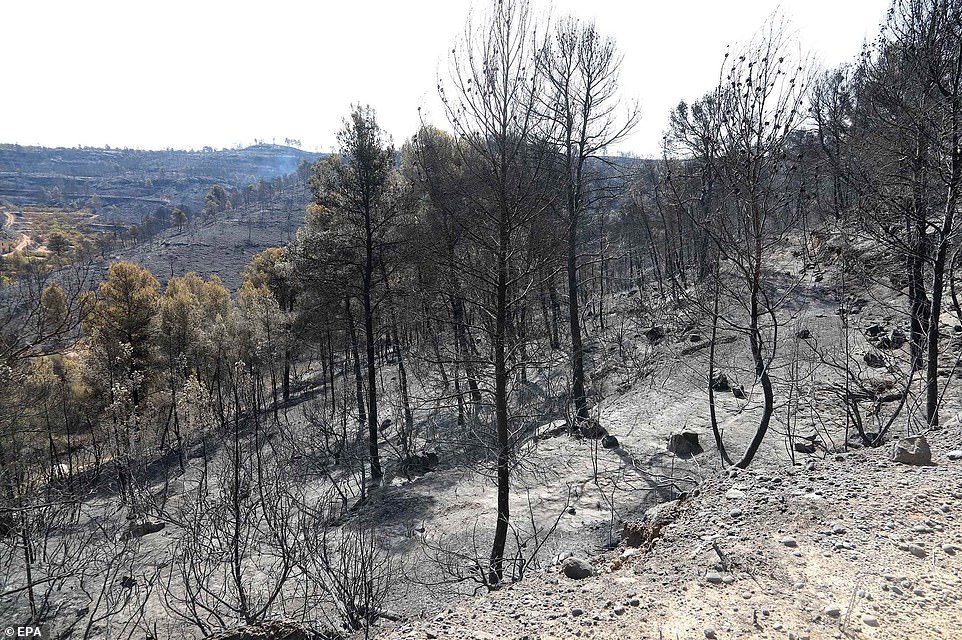 A burnt forest area in Tarragona, Catalonia, northeastern Spain. The fire started in the late evening in the area of Ribera d’Ebre and has burnt at least 4,000 hectares so far

‘The situation is critical,’ said fire service chief Antonio Ramos. ‘We haven’t seen a fire like this (in the region) in 20 years.’

Dozens have been evacuated, water-dropping aircraft were helping emergency crews on the ground and distressing images showed farm animals lying dead after being caught up in the blaze.

The region’s interior minister Miquel Buch said the fire may have been caused by ‘an accumulation of manure in a farm that generated enough heat to explode and generate sparks.’ 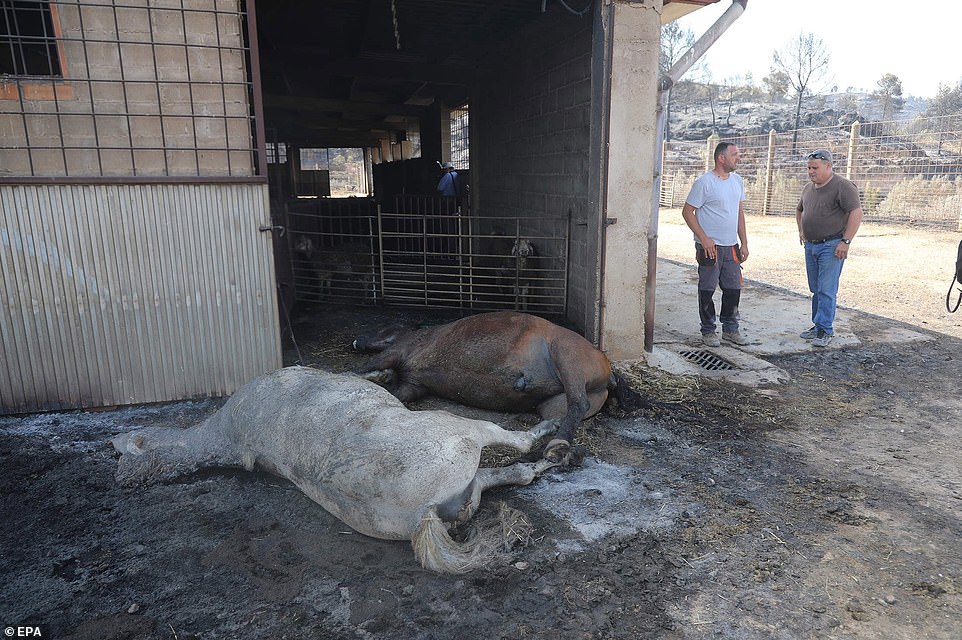 The wildfires in Catalonia are among the worst it has seen in 20 years, the regional government said, adding that around 30 people had been evacuated from farmhouses in the affected area. Two horses are pictured dead after fires hit their farm 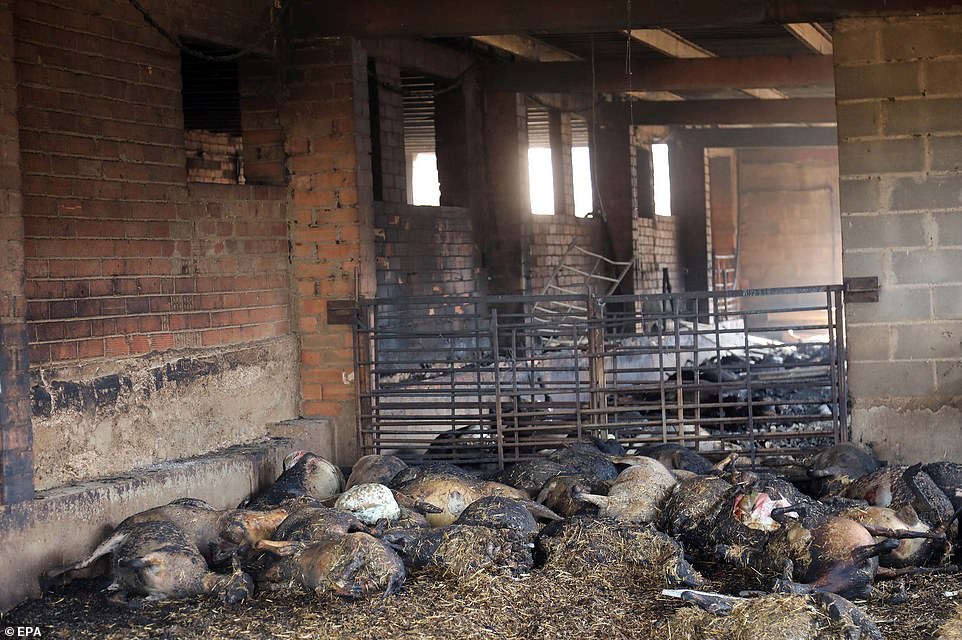 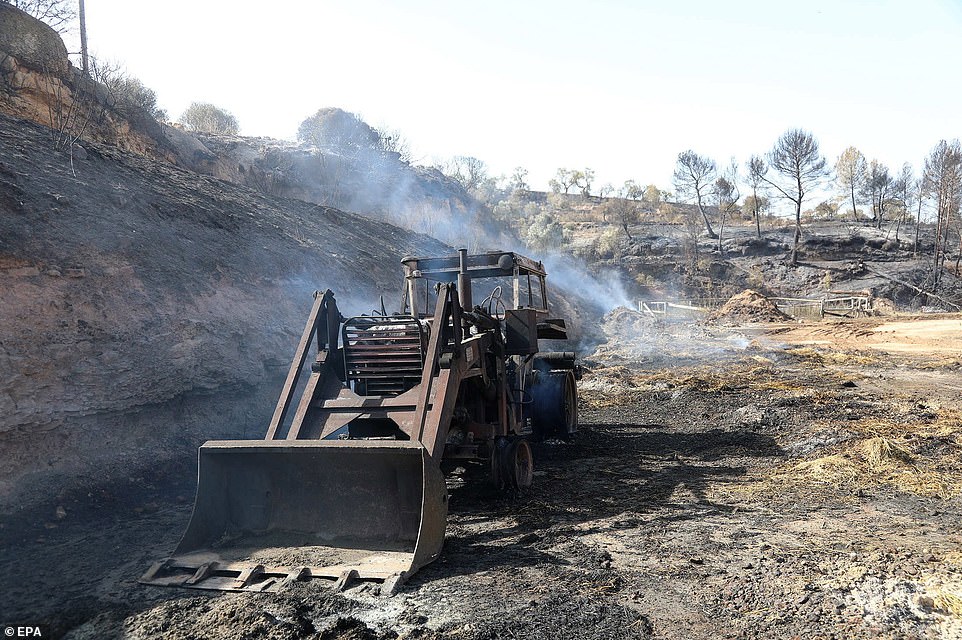 A digger was destroyed as a fire ripped across a farm near the village of La Torre De L’Espanyol, in Tarragona, Catalonia 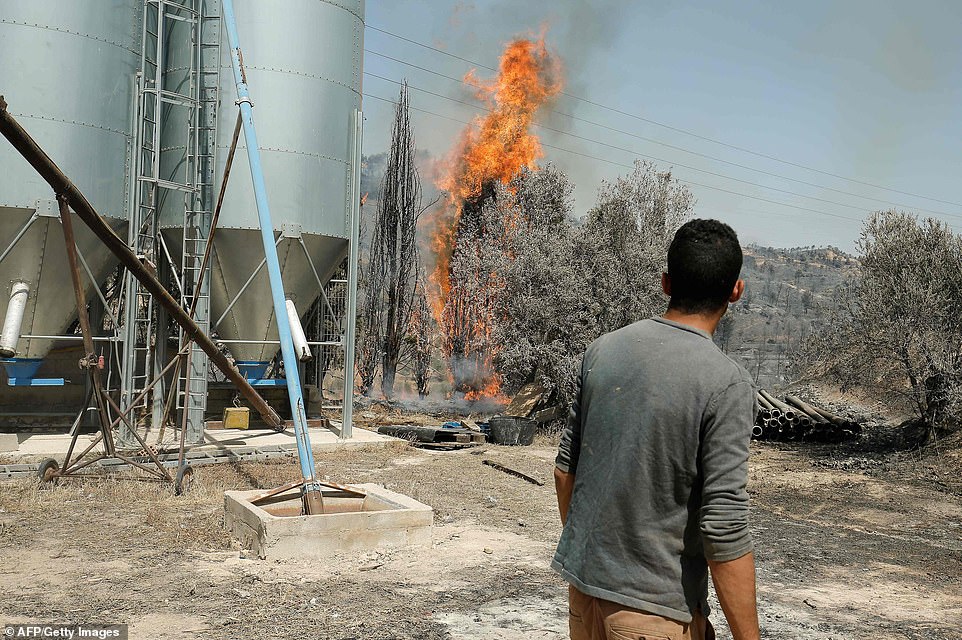 A farmer looks at burning trees near Flix. Pictures show how dozens of farmyard animals have been killed in wildfires

With temperatures expected to reach up to 108F (41C) on Friday, Spain has issued a ‘red level’ warning to its population.

Firefighters in Greece battled to contain a blaze near an arms factory just 30 miles from Athens with the fire having forced the evacuation of a small refugee camp.

Wildfires are common during Greece’s hot, arid summers and last year, 101 people died after a blaze swept through a seaside resort east of the capital.

Elsewhere, the Italian city of Milan saw a 72-year-old homeless man die at the main train station after falling ill due to the heatwave, the local authorities said. 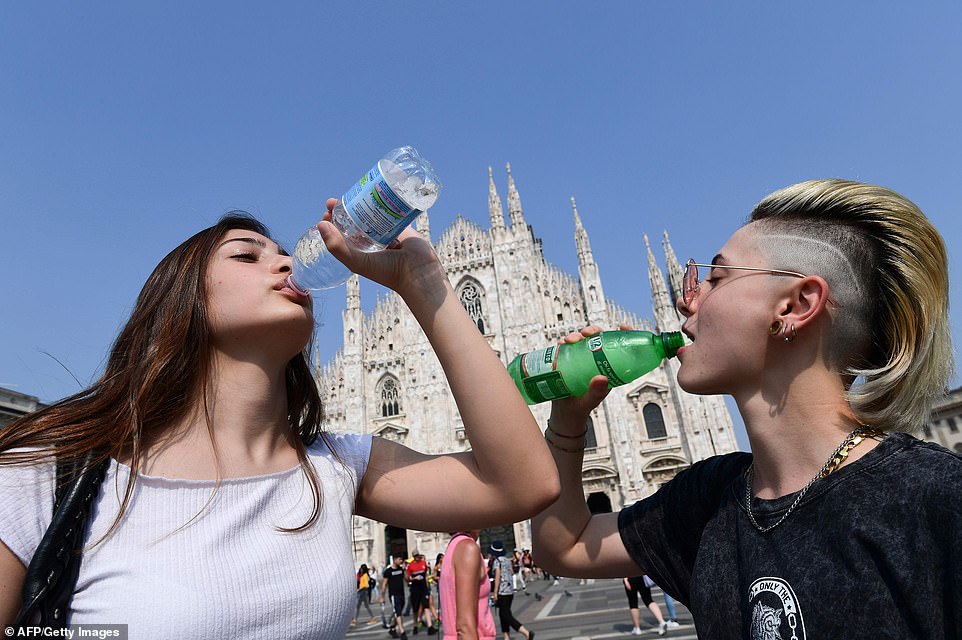 Italy’s health ministry, meanwhile, has issued a maximum red alert for heat for six cities on Thursday and for 16 on Friday, Ansa reports. (Above, women drink water in front of the Duomo in central Milan on Wednesday)

As Germans attempted to cool off amid scorching temperatures, at least four people died in bathing accidents in different parts of the country on Wednesday.

Some areas of the country were experiencing water shortages and some residents in the North Rhine-Westphalia state were told to only use drinking water for vital purposes or face a 1,000- euro (£1,021) fine.

There has been no coordinated shutdown of schools but some have closed in parts of France, while others advised parents to keep children at home.

In Paris, Lyon, Marseille and Strasbourg, authorities have banned the most-polluting cars from the roads.

Residents of the French city of Grenoble were unable to use two municipal swimming pools despite the record temperatures, due to a row sparked by use of the full-body Islamic burkini swimsuit.

Lifeguards had asked for the shutdown after Muslim women clad in burkinis had gone to swim in defiance of a municipal ban.

Eco-warriors Meghan and Harry return to California in private jet

Jail for man who filmed himself sexually assaulting teenage girl