Boris Johnson is ‘resisting’ calls to publish a report into allegations of bullying by Priti Patel, it was claimed today.

The report was commissioned back in March and Downing Street has faced repeated questions for months over when the findings will be released.

Officials are now said to be pushing for Simon Case, who replaces Sir Mark Sedwill as Cabinet Secretary as of this morning, to publish the report.

But the Prime Minister is said to be reluctant to make the findings public amid claims the report did find evidence of bullying ‘but the judgement is that it is not enough to sack’ Ms Patel.

The Home Secretary and her allies have always vehemently denied all of the allegations made against her. 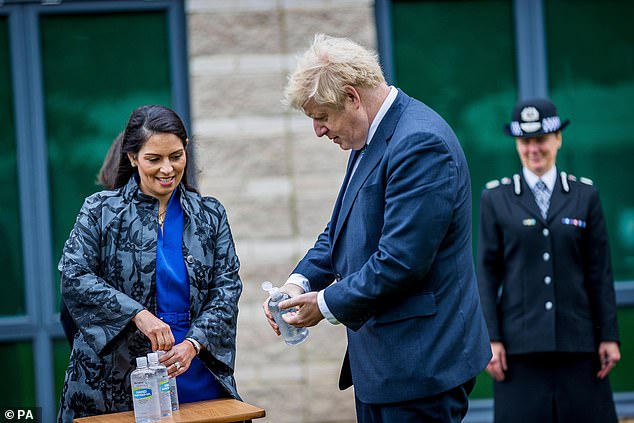 Boris Johnson is said to be resisting calls to publish a report into allegations of bullying by Priti Patel. The Prime Minister and the Home Secretary are pictured together during a visit to a police headquarters in North Yorkshire in July

The Financial Times today reported that the report recommends Ms Patel should apologise.

One Whitehall source told the FT: ‘The report has evidence of bullying, but the judgment is that it is not enough to sack.

‘That would be a tough one to publish and an apology is being resisted by her [Ms Patel].’

Another source said the report ‘calls on Priti to apologise’ but the Home Secretary and Downing Street ‘are resisting, hence why it hasn’t been released’.

It was claimed in July the report had been completed ‘weeks ago’ but Downing Street was delaying publication because of fears the findings would be politically embarrassing.

The investigation was launched back in March after the Home Office’s most senior civil servant, Sir Philip Rutnam, resigned.

Sir Philip claimed he had been the ‘target of a vicious and orchestrated briefing campaign’ and suggested Ms Patel was involved.

The Home Secretary had also faced allegations of bullying civil servants relating to her time at other Whitehall departments.

Ms Patel and her allies have always rejected all of the allegations made against her.

HS2 must be made using BRITISH steel say unions