Two angry drivers in a fiery road rage brawl where captured on video trading kicks in the middle of a busy road, leaving the person filming burst out into laughter.

Footage from a street in Adelaide’s North Terrace shows the driver of a white Toyota Camry get out of his car and approach the window of a ute.

After a short-lived conversation the ute driver throws something out of the window, which the Toyota driver picks up and hurls at the windscreen of the ute.

Shouting out ‘Oi’, the Ute driver tries to open his car door, which is quickly kicked shut by the Toyota driver.

Breaking out into a brawl, the two motorists continuously attempt to kick each other from an arm’s distance while the person filming and other onlookers hysterically laugh.

As the brawl continues, the Toyota driver falls over and the pair exchange some heated words before having a stand-off in the middle of the busy main road.

Viewers shared the sentiment of the bystanders, with one writing ‘Well that was amusing.’

‘His spinning back kick was on par with a 5 year old’, the person joked.

‘Stress levels are very high. So many people are on edge and ‘lose it’ too easily’, another wrote. 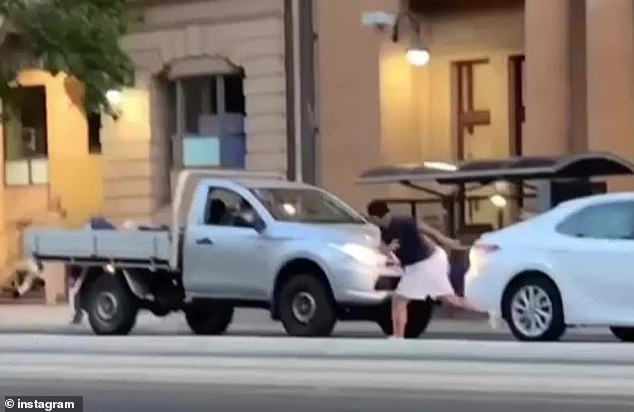 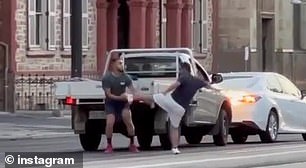 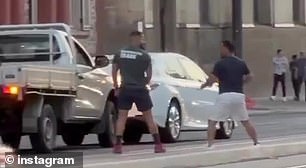 The video was reshared to Instagram by comedy page S*** Adelaide, who captioned the footage: ‘This is by far and away the worst example of martial arts you’ll ever see – with each punter failing to land a single blow.’

Viewers shared their thoughts, with one humorously writing ‘That was the most anticlimactic follow up fight I’ve ever seen’.

‘I love how they think if they put their hazard lights on they can just go at it in the middle of Currie st’, another wrote.

Chilling footage shows girl, 7, playing just minutes before she was crushed to death by 200lbs tyre outside dad's shop