Mitchell, who last week pleaded guilty to two counts of unlawful assault over separate attacks in 2019, will now also be able to reunite with his fellow Mongols associates and leave his Southbank apartment after 8pm, after “onerous” bail conditions were relaxed. 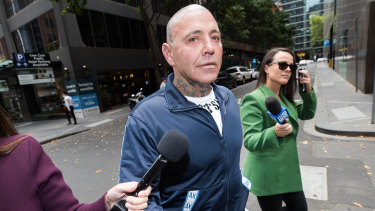 It came as a magistrate allowed the release of CCTV footage depicting the two assaults, which occurred outside Gilson cafe in South Yarra on October 8 and at Southbank on November 15.

The 45-year-old Mongols boss was due to be sentenced at Melbourne Magistrates Court on Monday.

But Corrections Victoria asked the court for four more weeks to adequately assess Mitchell’s suitability for a community corrections order.

Magistrate John Bentley then decided to instead defer sentencing and require Mitchell undergo therapy before returning to court in September. 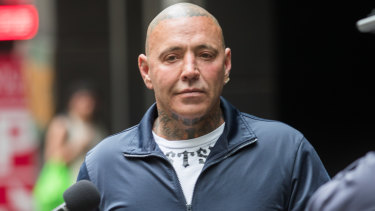 Mr Bentley said Mitchell would need to provide the court with proof at his sentencing that he had completed the two therapeutic courses.

“Mr Mitchell, good luck with that. I’ll see you back here on September 1,” Mr Bentley said.

Mitchell has been on bail since the October assault. He is still unable to leave Victoria under his extended bail conditions.

But conditions that previously barred him from associating with other Mongols outlaw motorcycle club members, and a curfew that ordered he remain at his Southbank address between 8pm and 6am, were removed on Monday.

He appeared via video link from his solicitor’s office during the hearing, where he could be seen grinning on learning the news.

During an earlier hearing at the Melbourne Magistrates Court last week, police prosecutor Geoff Adams described Mitchell’s behaviour as being like that of an “enforcer” when he assaulted one man and appeared to be “out for blood” when he punched another during separate attacks on the streets of Melbourne.

Footage of the South Yarra assault shows Mitchell and his victim standing outside Gilson cafe on October 8 before the bikie boss slaps him in the face with an open palm three times. Mitchell then falls briefly to the ground before being helped up by a known associate.

Video footage from a separate incident on November 15 shows Mitchell on the Southbank promenade near Queensbridge Street with a large group and men and women about 3am.

After getting into what appears to be a verbal argument with a lone man, Mitchell strikes the man to the face before delivering two upper cuts to his victim’s body as he crouches over.

After being dragged away by a large group of other men, Mitchell returns and unsuccessfully attempts to strike the victim again. The man this time fights back, punching Mitchell to the face and rendering him semi-conscious on the ground.

A former senior Bandidos member, who controversially switched clubs to join the Mongols in 2019, Mitchell has previously survived being shot in the body five times in 2011 and in the arm in 2013.

He now takes 27 different types of medicine to deal with ongoing health concerns as a result of his gunshot injuries, the court was previously told.

The matter will return to court on September 1.