Patrick Moore was asked to clear out Biden’s office in November and found the documents, CNN reported.

Moore then informed the National Archives and Justice Department.

On Tuesday it emerged that Moore has already spoken to John Lausch, the U.S. Attorney for the northern district of Illinois.

Lausch was initially tasked with investigating the classified material; his job has now been taken over by the special counsel, Robert Hur, who was appointed on January 12. 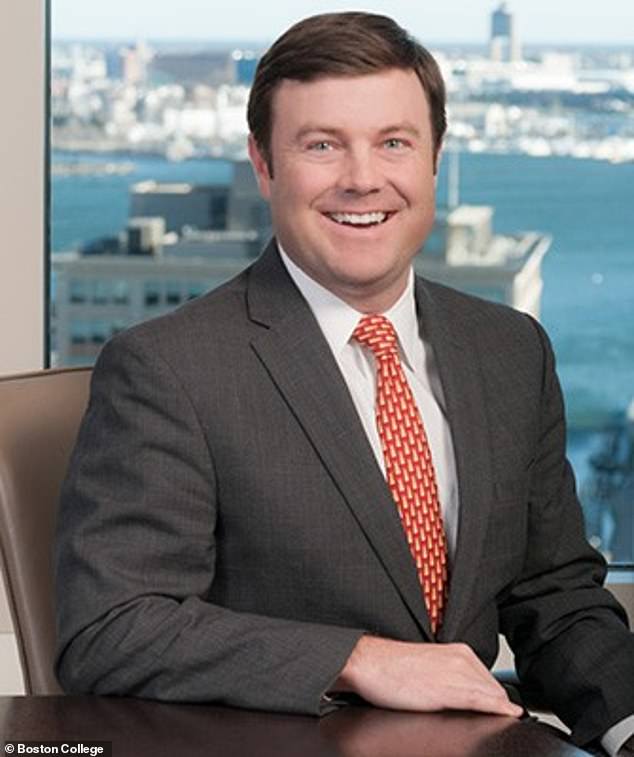 Patrick Moore, Joe Biden’s personal attorney, has already spoken to federal prosecutors about classified material found at Biden’s DC think tank, it has emerged. It is not yet known if Moore will also be required to speak to the special counsel, Robert Hur 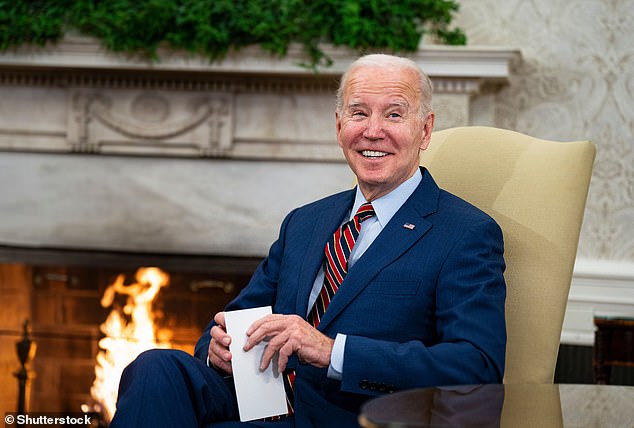 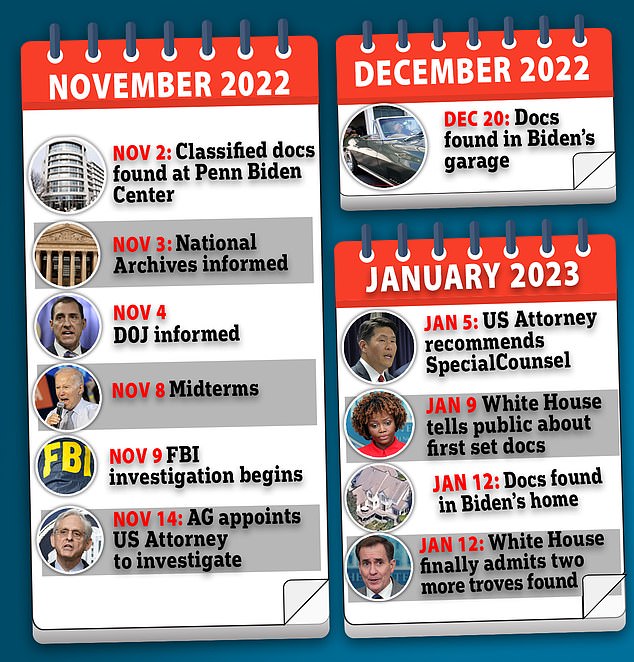 It is not clear if Moore will be interviewed again by Hur.

Lausch was already known to have spoken to several other Biden aides, including Kathy Chung, Biden’s former executive assistant.

On Tuesday Biden smiled and laughed as he ignored a barrage of questions about the classified documents scandal that has engulfed his administration – while a shocking new report detailed a deal made by the Justice Department to keep the FBI away from the search.

The grinning Biden stayed silent at the end of his meeting with Netherlands’ Prime Minister Mark Rutte – while the media asked about the sensitive files found at his D.C. think tank and garage at his Wilmington home.

Meanwhile, the Wall Street Journal revealed on Tuesday that the Justice Department considered having FBI agents monitor Biden’s personal attorneys as they searched his Wilmington and Rehoboth homes but decided against it, because Biden’s lawyers were cooperating with them.

Biden’s legal team, after the discovery of the first tranche of documents at his D.C. think tank, talked with the DoJ about having FBI agents present while Biden’s lawyers conducted the additional searches.

Ultimately the two sides cut a deal where only Biden’s attorneys would do the search and immediately report any findings. They did find more documents – in the garage and ‘personal library’ of the president’s Wilmington home.

Trump and his supporters have roared about the situation, calling it a double standard. Biden’s team argues they have been consistently cooperating in their case.

Nov. 3: The National Archives was notified of the discovery

Nov. 4: The National Archives’ Office of Inspector General contacted a prosecutor at the Department of Justice and told them that classified material had been discovered at the Penn Biden Center. The documents were secured at an Archives facility

Nov. 9: The FBI commenced an assessment to determine whether classified material had been mishandled

Nov. 14: Attorney General Merrick Garland assigned the U.S. Attorney for the Northern District of Illinois, John Lausch, to determine if a special counsel was needed

Dec. 20: The president’s personal attorney informed Lausch that additional documents with classification markings were found in Biden’s garage in Wilmington, Delaware. The FBI secured those documents

Jan 5: Lausch advised Garland that a special counsel should be appointed

The president, meanwhile, has evaded shouted questions on more than one occasion on the documents debacle since it was first reported last week.

He last spoke on matter on Thursday, reading a prepared statement and defended having the classified material in the same garage as his Corvette, noting his classic car was kept locked up.

The White House is also under intense scrutiny for waiting two months to publicly react to the discovery of the first batch of classified documents at the Penn Biden Center.

To try and deflect from the controversy, the White House on Tuesday tried to attack Republicans and asked Kevin McCarthy to reveal all the backroom deals he made to become Speaker.

The GOP has put pressure on Biden and the administration’s response to their handling of classified material by promising Congressional investigations and demanding visitor logs from the Wilmington home – which the White House says doesn’t exist.

During the meeting with Rutte, the president didn’t answer questions from reporters – including one on whether he would speak with special counsel Robert Hur.

Law enforcement sources told the Journal that FBI agents may not have wanted to be part of the original search so they could ask for a search warrant at a later date if they found something in their investigation that required it.

Hur is expected to begin his job as special counsel by the end of the month as he had to give notice at the private law firm he is working.

House Oversight Committee Chairman James Comer, a Republican of Kentucky, sent a letter to Biden’s Chief of Staff Ron Klain on Sunday demanding access to any visitor logs kept for the Delaware home.

‘Without a list of individuals who have visited his residence, the American people will never know who had access to these highly sensitive documents,’ he wrote.

The White House has said there are no visitor logs as it is a private home.

And, on Tuesday, Ian Sams, a White House spokesman, held a briefing call with reporters to slam Republicans’ probes.

‘Their outrage is all pure theater,’ he said.

He would not commit to the White House cooperating with the GOP requests for documents and other information.

‘We’re limited in what we can say during an ongoing DOJ inquiry,’ he said, referring to the special counsel’s inquiry.

‘We’ll make a determination about our response in due course, but of course, we’re gonna call it out when we see rampant hypocrisy, that that shows a total lack of credibility when it comes to these requests,’ he noted.

‘We’re not going to get ahead of that process with the Special Counsel and speculate on what they may or may not want or ask for,’ he said. 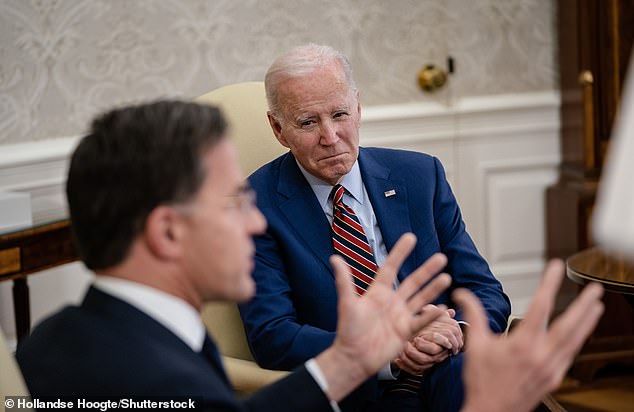 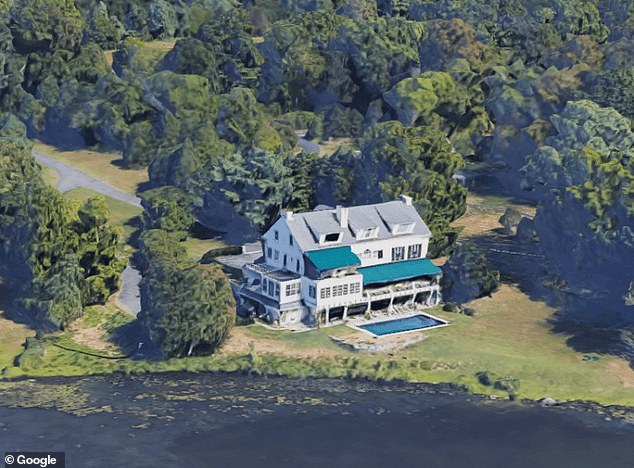 Biden’s home in Wilmington, Delaware, where an additional tranche of classified documents were found

On Saturday, the White House revealed a fourth tranche of documents were found – again at Biden’s Wilmington home.

The White House has faced repeated questions over its lack of transparency about when the documents were discovered. They waited about two months – until well past the November midterm election – to announce documents found at Biden’s DC think tank before voters went to the polls.

The counsel’s office then made two more announcements – regarding documents found at Biden’s garage in his Wilmington home and then a third document found in  a room at that house.

White House Counsel Richard Sauber said that because he has security clearance, and Biden’s personal lawyers don’t, he had gone to the president’s home to examine other papers there.

Meanwhile, a special counsel is already reviewing Trump’s possession of highly classified materials at his Mar-a-Lago residence. FBI agents searched the residence this summer under a grand jury subpoena after a months-long process seeking to obtain government material.

The White House has consistently emphasized Biden’s attorneys found the documents and promptly turned them over to the National Archives, arguing all proper procedures were followed.

In Trump’s case, the Archives realized documents from his administration were missing and requested their return.

Trump eventually gave 15 boxes of materials to the agency, which discovered classified documents among them. When federal investigators suspected the former president was holding onto more documents, they got a judge’s permission to search Mar-a-Lago.

That raid took place in August and turned up more documents.

For his part, Biden previously said he and his staff would cooperate with the investigation. He expressed surprise to discover he had classified documents dating back to when he served as Barack Obama’s vice president.

‘I’m going to get a chance to speak on this soon, God willing,’ he added, as reporters shouted questions.

‘We’re going to see all this unfold.’