Oh empty town of Bethlehem: Birthplace of Jesus is deserted as tens of thousands of pilgrims stay away in the run up to Christmas amid coronavirus lockdown

The coronavirus has cast a pall over Christmas celebrations in Bethlehem, all but shutting down the biblical town revered as Jesus’s birthplace at the height of the normally cheery holiday season.

Missing are the thousands of international pilgrims who normally descend upon the town. Restaurants, hotels and souvenir shops are closed.

The renowned Christmas tree lighting service will be limited to a small group of authorized people, as will church services on Christmas Eve.

‘Bethlehem is dead,’ said Maryana al-Arja, owner of the 120-room Angel Hotel on the outskirts of Bethlehem. 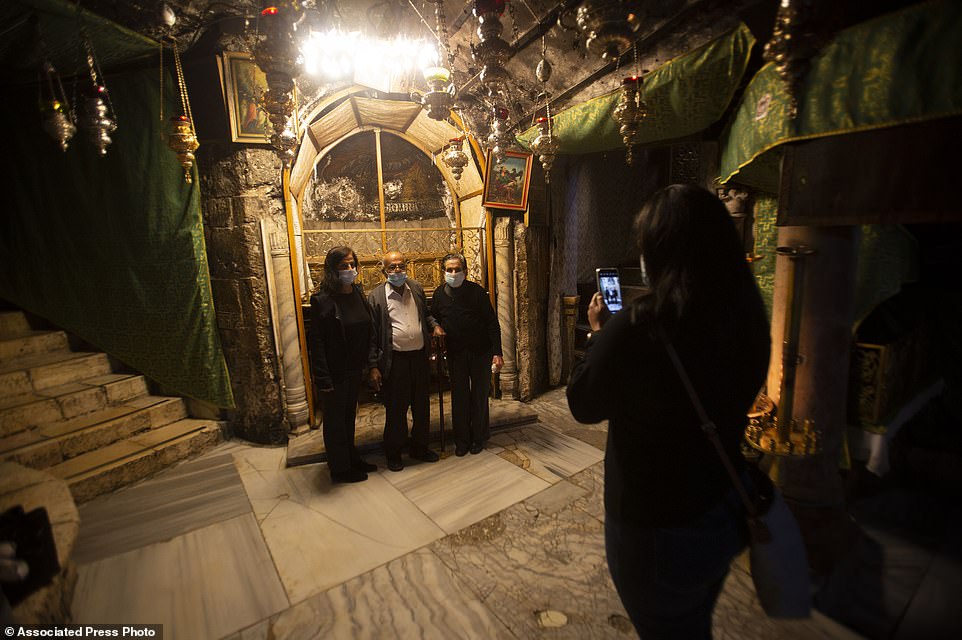 Bethlehem is typically packed with pilgrims from across the world in the run-up to Christmas as Christians come to visit the city of Jesus’s birth (pictured, the Grotto of the Church of the Nativity, believed to be his birthplace) 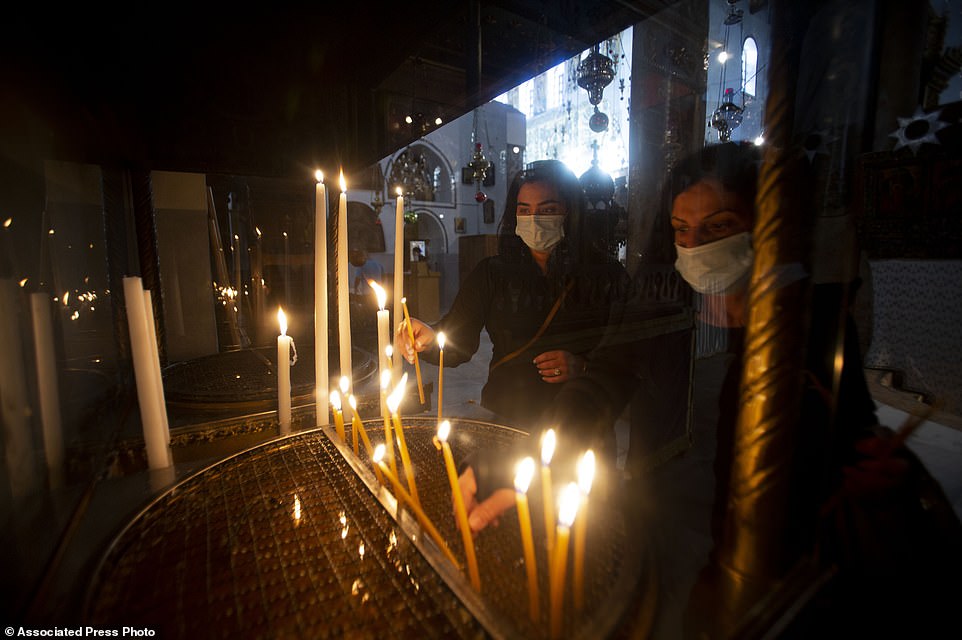 Hotels, restaurants and souvenir shops have been forced to close in the West Bank city of Bethlehem this year as visitors stay away over coronavirus (pictured, worshippers light candles in the Church of the Nativity

The hotel was the site of the West Bank’s first coronavirus outbreak – when a group of Greek tourists came down with the virus last March.

She kept her 25 workers on staff for several months but ultimately couldn´t continue to pay them.

Al-Arja, who herself was infected with the virus, said she has been forced to close the hotel and lay off the entire staff because there is no sign of the pandemic ending or tourists visiting anytime soon.

‘We had 351 tourist groups booked in our hotel this year, each one 150 people,’ she said. ‘But they all canceled.’

Elyas al-Arja, the head of the city´s hotel association, said Bethlehem received some 3 million tourists in 2019.

With Israel, the main entry point for international visitors to the region, banning tourists because of the coronavirus crisis, and the West Bank´s border crossing with Jordan closed to foreigners, that number is close to zero this year, he said.

‘Sixty percent of the city relies on tourism, and their income disappeared when the tourists disappeared,’ said al-Arja, a cousin of the Angel Hotel owner. 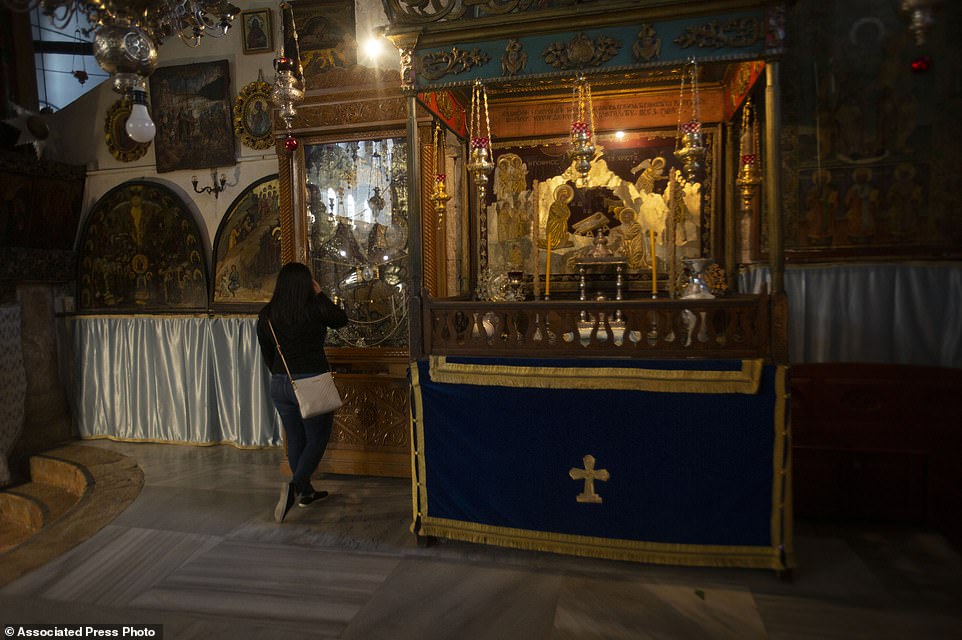 Israel – the main entry point for western tourists to the West Bank – is not accepting tourists due to the virus, while Jordan has also closed its border crossing to foreigners (pictured, visitors at the Church of the Nativity)

The Ambassador Hotel, which is located near the Church of the Nativity, built on the site where Christians believe Jesus was born, has reopened one floor in hopes that some local visitors may want to come celebrate in the coming weeks.

Mahmoud Tarman, the hotel´s receptionist, said the Ambassador has brought back eight of its 60 workers to serve local guests.

But with the West Bank´s economy devastated by repeated lockdowns, it remains unclear how many people will come.

‘At this time of the year, this empty hotel would be bustling with life. But as you see, there is no life, not even a Christmas tree yet,’ he said as he pointed at the empty lobby.

The Palestinian Authority, which administers parts of the Israeli-occupied West Bank, this week imposed a new nighttime lockdown to help contain a spike in Covid cases.

People must remain indoors from 7 pm until 6 am, and Bethlehem is included in the lockdown.

Officials say the lockdown could be extended through Christmas and into the new year if the infection levels don’t come down.

The Health Ministry has reported a total of about 65,000 coronavirus cases in the West Bank, and over 620 deaths. 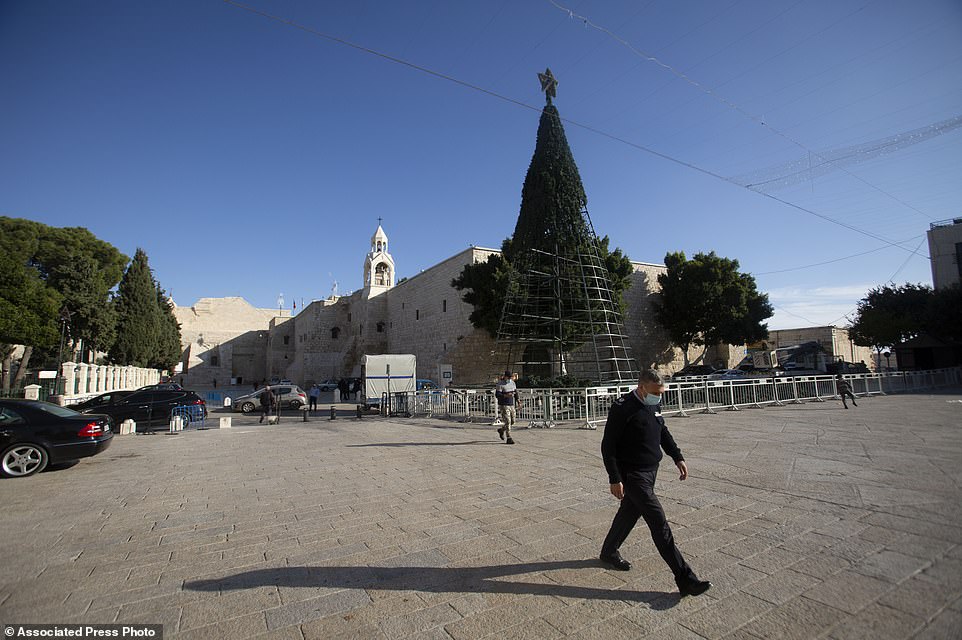 The square outside the Church of the Nativity, typically bustling with tourists at this time of year, is virtually deserted due to coronavirus 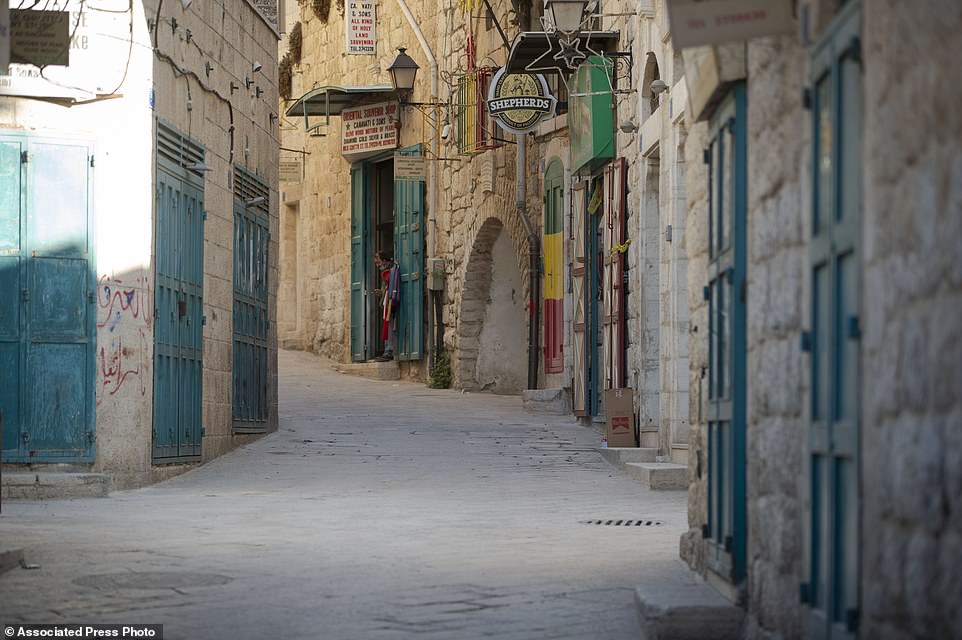 A Palestinian vendor stands in front of his shop near the Church of the Nativity, where many of the shops have closed down due to lack of business 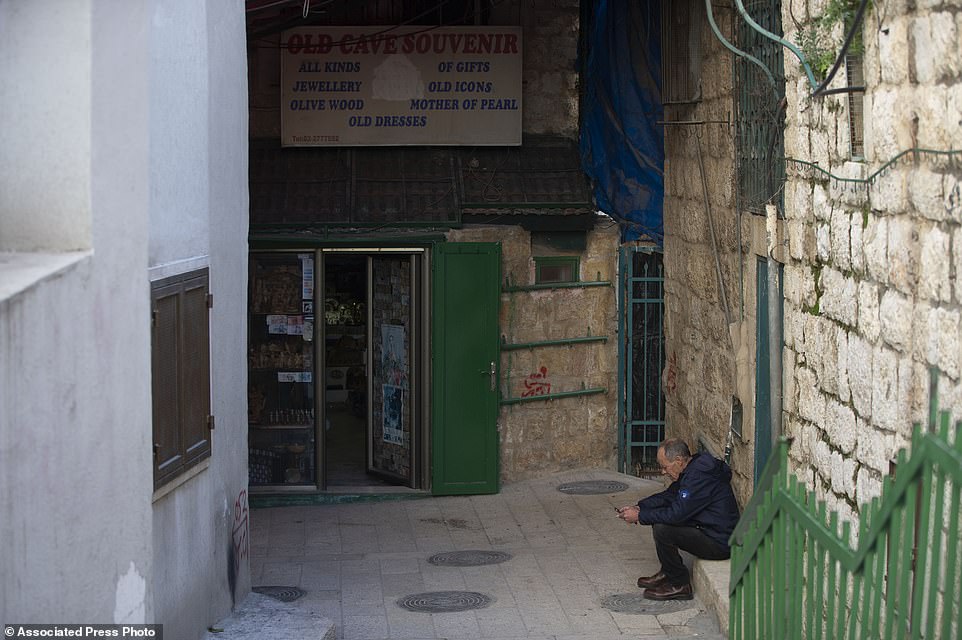 A Palestinian vendor sits in front of his shop in Bethlehem, where local economies have been left devastated by the impact of lockdowns

Bethlehem´s mayor, Anton Salman, said the city had planned to receive 3,000 invited guests, including local scout troops and musical bands from around the world that normally entertain visitors during Christmas Eve festivities.

He said the famed Christmas tree lighting, scheduled on Thursday, will be limited to just 15 guests, including local mayors, the district governor and the Latin Patriarch and other clergy.

The 85-year-old Palestinian president, Mahmoud Abbas, who usually joins the celebration, has been invited but has not said whether he will attend.

Midnight Mass, a solemn event led by the Latin Patriarch that is usually attended by religious leaders, local VIPs and hundreds of pilgrims from around the world, has also been scaled back, Salman said.

He said officials are still working on the guest list, but it is expected to include religious leaders and some foreign diplomats.

The event will be closed to the general public but broadcast live for people to watch.

‘No one can hold the responsibility of inviting large numbers of people to Christmas events,’ he said. ‘Nothing will be the same during the pandemic.’