A judge will decide whether to allow the lawyer of former special forces soldier Ben Roberts-Smith to cross-examine his ex-wife over whether she gave her friend access to his email account.

Mr Roberts-Smith, who is suing The Age, The Sydney Morning Herald and The Canberra Times for defamation over articles that he says wrongly portray him as a murderer and war criminal, is also taking action against his former wife, Emma Roberts, to find out if she gave confidential information to the newspapers’ lawyers. 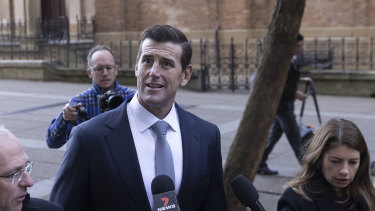 Ben Roberts-Smith is suing his ex-wife over claims she leaked confidential information related to his defamation trial.Credit:Brook Mitchell

Mr Roberts-Smith’s barrister, Arthur Moses, SC, told the Federal Court on Tuesday that telecommunications records indicate an email address used by the former soldier to correspond with his lawyers was accessed by Danielle Scott, a close friend of Ms Roberts, on at least 101 occasions.

Ms Roberts signed an affidavit on August 20 swearing that she did not give Ms Scott access to the account.

“Now regrettably, we say that those passages of that affidavit are a false construct,” Mr Moses said.

“Because what we do know now, as a result of documents produced by Telstra and Crazy Domains, is that the only person who had access to that [Roberts-Smith] group email account on April 5 was an email address which was associated with Ms Danielle Scott or her husband.”

The issue went to the integrity of the court process and the administration of justice and was crucial in working out how the media company’s lawyers in the defamation proceedings “came to be armed with the knowledge of certain emails”, Mr Moses said.

Ms Roberts should now be brought into court for cross-examination so she could be held to account, he said.

“This really brings into sharp focus the integrity of the court process. [Ms Roberts] has been caught out lying on objective evidence.”

But Ms Roberts’s lawyer, Jason Murakami, said the inference Mr Moses was making was “purely speculative” and there was no evidence that Ms Roberts had given her friend the password. It had never been clear what confidential information Mr Roberts-Smith believed had been leaked when he took legal action against his ex-wife in the first place.

“In all the materials, in all the affidavits provided by [Mr Roberts-Smith], never once has he been able to refer the court to the confidential information that he says he’s trying to protect, which is the basis of the originating application,” Mr Murakami said.

In addition to claiming that articles by Nine newspapers portrayed him as a war criminal, Mr Roberts-Smith is also suing the newspapers over an allegation that he assaulted a woman with whom he was having an affair.

Ms Roberts was originally expected to testify for her ex-husband in the defamation proceedings and to say she was separated from her husband while he was in a relationship with the other woman, but she now says that she was being pressured to lie on his behalf. She will be called to give evidence for the newspapers instead.

Ms Scott, who will also give evidence for the newspapers, was friends with both members of the couple before their separation. The court has heard that Mr Roberts-Smith asked her whether stamps could be traced, while she was working for Australia Post.

The newspapers allege that Mr Roberts-Smith was planning to send threatening letters to fellow soldiers, whom he feared might give evidence against him.

Justice Robert Bromwich has reserved his decision until September 17. The defamation trial is scheduled to begin in November, depending on COVID-19 lockdowns and state border closures.

Cressida Dick warns not to 'over indulge' when lockdown rules ease