Cancelling the much-debated and delayed 2021 Australian Formula One Grand Prix dealt a blow to the idea, encouraged by the recent influx of AFL teams to Victoria, that Melbourne has bounced back from the pandemic to reclaim its title as the nation’s sports capital. But at least this year the decision to call off the big race, which had been pencilled in for November, has been made months in advance.

The Victorian government acknowledged this week that it could not credibly reconcile clamping down on international arrivals while still inviting in an international event that would require quarantine waivers for motorsport’s jet set. 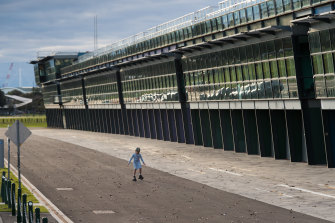 Albert Park on Tuesday after the announcement of the cancellation of the grand prix.Credit:Jason South

Fast-forward 15 months or so and global and local conditions are both different and the same. COVID-19 still looms large, but it is the Victorian government itself which has called a halt to the grand prix while most of the rest of the world is ploughing ahead with it.

Australia has suppressed the virus much more successfully than most other countries but now appears to be trapped by its own success.

There are two main reasons the event was cancelled. Australia could not waive the fortnight’s strict quarantine for F1 crews arriving straight from virus-swamped Sao Paulo because the two events were less than two weeks apart. And we could not give the green light to so many elite sports exceptions to our radically reduced cap of only 500 international arrivals a week – not after Premier Daniel Andrews had gone to national cabinet last week on a mission to cut numbers even further to stave off the threat of a local Delta outbreak.

Australia is only now ruing our sluggish vaccination drive as virus variants start jumping our quarantine containment lines, keeping the states on a cycle of sudden lockdowns and border bans. So protected have we been that AstraZeneca’s rare side effects are now deemed by the Australian Technical Advisory Group on Immunisation to be unacceptable for people under 60, while our Pfizer stock won’t stretch to cover demand until much later in the year.

So Australia remains stuck behind patrolled borders, able to take only baby steps towards a future where this virus becomes endemic but manageable. Meanwhile, our sports fans press their noses to the TV screen, where vaccinated and tested crowds cheer on the Giro d’Italia, the Tour de France, Wimbledon and the Euros. Infection numbers rise in their wake, but so far, high inoculation rates have kept hospitalisations and deaths from the coronavirus low.

It is not that the rest of the world is in cruise control; infections and deaths continue to accelerate in Brazil and the Sao Paulo grand prix may yet be cancelled over the risks. But we cannot continue to couch the debate about our future in false binaries: it’s not a case of shutting out the virus forever or letting it rip unimpeded.

Even when Australia reaches whichever vaccination rate the Doherty Institute recommends, reopening the borders will not be risk free. We will still see fresh infections, even among some of the vaccinated. And despite the hope generated by two nursing home outbreaks in recent weeks without serious illness or death, we may still see some deaths we cannot prevent.

But Australia needs to start thinking through how we will take those steps into the future. It will never be as carefree as it once was, but we cannot hide forever.

Gay Alcorn sends an exclusive newsletter to subscribers each week. Sign up to receive her Note from the Editor.

Company defends use of toxic chemicals to fight plant fire