Hanoi: Police in Vietnam arrested eight people on Monday as investigators continued to trace how 39 people, said to be Vietnamese citizens, died in a refrigerated truck in southeastern England on October 23. 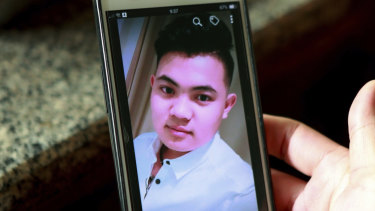 Hoang Thi Ai, mother of Hoang Van Tiep, who is feared to be among the England truck dead, hold a phone showing a photo of him in Dien Thinh village.Credit:AP

The arrests, reported in Vietnamese state media, were the latest in what has become a wide-ranging investigation spanning several countries. Police in Vietnam arrested two people on Friday, while British and Irish authorities have also made a series of arrests in connection with the case.

"Based on what we learn from the suspects, we will actively launch investigations to fight and eradicate these rings which bring people illegally to Britain," said Nguyen Huu Cau, police chief of the Vietnamese province of Nghe An, according to Reuters, which quoted the Vietnam News Agency.

Authorities are still working to identify the victims, who were found in Essex and were believed to have been transported through a global human smuggling network.

Thousands of migrants make the dangerous journey each year, enduring brutal conditions and violent treatment as they search for work. There have been several fatal instances of smugglers cramming people into airless trucks, including one left by the side of a highway in Austria in 2015, with 71 people dead inside. 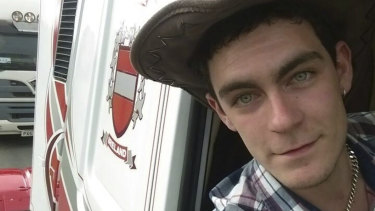 Mo Robinson, 25, has been arrested over the deaths of 39 people found in a lorry in Essex, England.Credit:Facebook

Authorities in Greece found 41 migrants on Monday in the back of a refrigerated truck after a random inspection on a highway in the north of the country, police said, adding that none of the people were seriously harmed.

Two drivers have been charged in the case of the bodies discovered in Essex. Maurice Robinson, 25, of Northern Ireland, who was believed to be the driver of the truck that picked up the trailer with the victims inside shortly before the bodies were found, was charged October 26 with 39 counts of manslaughter and conspiracy to traffic people.

The other truck driver, Eamon Harrison, 23, also of Northern Ireland, was charged in Ireland on Friday with 39 counts of manslaughter, human trafficking and immigration offences. Police said that he had delivered the trailer to a Belgian port before it was put on a ferry to England.

In the truck found in Greece, there were 39 migrants from Afghanistan, and one each from Iran and Syria, said a police spokesman in Komotini, a city in the northern region of Thrace. The driver, who is Georgian, was detained and faces charges of human trafficking.

The refrigeration system was turned off. Eight of the people in the truck were taken to a hospital as a precaution, the spokesman said.

Greek police have intensified their checks on vehicles in recent months, particularly near the northern land border with Turkey, as human traffickers step up their operations.