As the UK plunges into a draconian-style lockdown in an effort to control the spread of the coronavirus outbreak, fears for the safety of NHS staff have begun to emerge on social media.

Wild rumours have begun to surface online that staff working in the health sector are being targetted for their valuables and I.D cards as they commute to and from work to help fight the surge in COVID-19 cases.

Some online users have claimed that thieves have been trying to get hold of their identity cards in an effort to gain access to the NHS staff priority shopping hours.

The Metropolitan Police said they had not received any reports of muggings directed at staff.

On Tuesday, Emma Dalton took to Twitter to urge the police to increase their patrols around Queen Square in London, claiming a junior doctor had been robbed that morning. 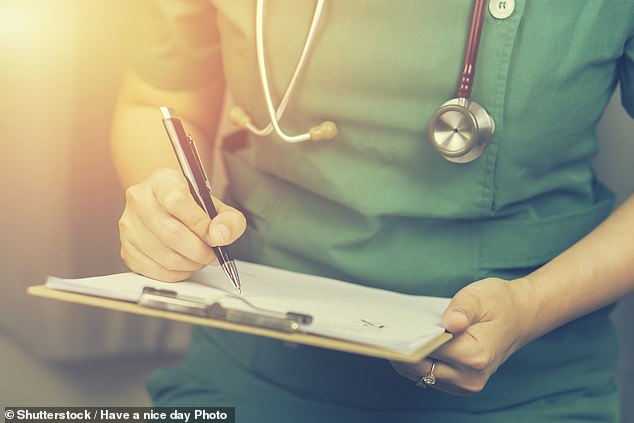 As the UK is plunged into lockdown, reports have begun to emerge on social media that NHS staff are being targetted for their valuables and I.D cards as they commute to and from work. (Stock image)

On Tuesday, Emma Dalton took to Twitter to claim that a junior doctor had been mugged near Queen Square in London

In her post she claimed: ‘Please increase patrols around Queen Square. The NHS staff are being mugged trying to get to and from work at that hospital this morning.’

After being asked by Camden Police if the mugging had been reported, the Twitter user went on to say: ‘It happened to a junior doctor there this morning, not me.

‘NHS staff entering and leaving the hospital keep being targetted by muggers for their valuables and their id cards on both Queen Street and Great Ormond Street.’

Ms Dalton’s post is the latest in a series of social media posts made by users across the country claiming that staff are being targetted amid the virus outbreak for their valuables.

One person took to Twitter to claim: ‘So received a call from my mum (who’s one of many amazing nurse working through COVID-19) and she’s just been advised to ”take extra care” when going to get food in breaks/afterwork as some of the staff have been mugged for their NHS CARDS!!!’

Another person shared: ‘How in these critical times am I receiving these kind of messages from my girlfriend in hospital!? ”Staff are being mugged at knife point for phones and NHS ID badges outside out hospital now by a group of women. So scary.” 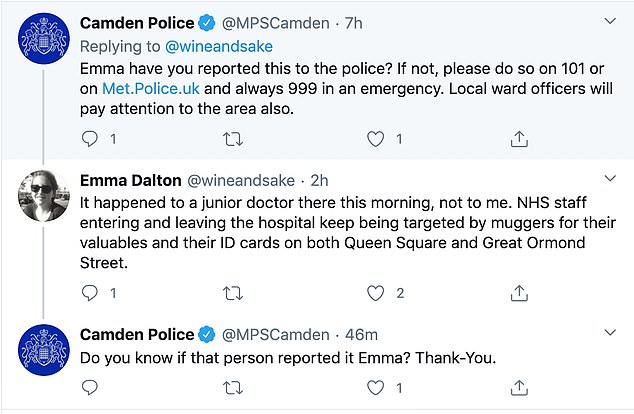 While another social media post read: ‘A reminder to health, social care and community providers. NHS staff are being mugged for their staff IDs while on their way to and from work.’

‘For your own safety, all staff should keep their ID cards concealed and only show them as and when required.’

Elsewhere, some social media users claimed that the staff were being targetted for their reserved shopping sessions.

One user added: ‘Telephone conversation with friend in Surrey- apparently some NHS staff have been mugged for their lanyards by people using them to get into reserved shopping sessions.’

Another person shared: ‘ ‘Hearing rumours that some NHS staff are being told not to wear their lanyards as some are being mugged for their ID. Seriously, I despair some people.’

The alleged muggings come as the Prime Minister Boris Johnson plunged the country into lockdown to stop the spread of COVID-19.

On Monday, Mr Johnson ordered the immediate closure of all shops selling non-essential goods, as well as playgrounds and churches in a bid to stop the spread of the deadly virus.

Addressing the nation from Downing Street, the Prime Minister said: ‘From this evening I must give the British people a very simple instruction – you must stay at home.

‘Because the critical thing we must do is stop the disease spreading between households.’

Under the measures, people will only be able to leave their homes for essential supplies, medical help, or to travel to work if it is ‘absolutely’ unavoidable.

The public will also be able to leave their home for exercise once per day, but parks will be patrolled to make sure there is no abuse of the rules.

Bungalow owner forced out of her home by demolition plan