Doctors working in aged care say elderly residents moving into Victorian nursing homes are not being immunised against coronavirus.

The GPs have accused the federal government of abandoning its promise to have all staff and residents in aged care homes overseen by the Commonwealth vaccinated against COVID-19. 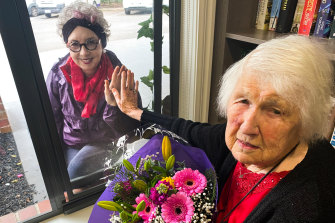 And the medics say vials of Pfizer, which must be stored in refrigerators, have at times been dropped off outside aged care homes with no medical teams available to administer doses.

Melbourne’s growing coronavirus outbreak has now infected two aged care workers and a 99-year-old resident, and has again exposed a failure to fully protect people in aged care, despite federal government assurances all residents and workers in the sector would be vaccinated by April.

Eastern suburbs GP Sarah Hume, who works at several aged care homes across Melbourne, knows of at least 10 elderly residents who recently moved into aged care and have not been vaccinated against COVID-19.

Other residents who were in hospital or unwell at the time vaccinations were administered at their homes in May have also been left un-immunised.

“We could see this coming from a mile away,” Dr Hume said. “In the last little while we have had a huge influx of people moving into aged care homes.

“These residents are extremely distressed that they aren’t able to get the vaccine and their families are becoming quite desperate. The anxiety is palpable.

Self-employed GP Lisa Rogers, who works across three aged care homes in Melbourne’s east, said she knew of several residents who had missed out on vaccines due to illness or because they had recently moved into a home.

“As it stands there is no catch-up program for these residents,” Dr Rogers said. “The whole rollout has been atrocious.”

She said a promised vaccination program for aged care staff never eventuated and workers were left scrambling to secure Pfizer doses left over from resident inoculations.

“Most staff were left waiting for vaccines that just never came,” Dr Rogers said. “There was never a proper program or clear communication to workers. We were just sort of thrown to the wolves and told to sort it out ourselves.”

Dr Rogers said in one incident a box of 30 vials of Pfizer vaccine was dropped off outside a Melbourne aged care facility by a courier at 6pm, but there were no staff there to administer them.

“There was no way to store them and so a few hours later it was sent back and probably discarded, when there were dozens of staff and residents in that home who really needed that vaccine.”

Peta Soorkia’s mother Mary has been in Arcare Maidstone for 18 months.

The life coach, who has heard from many clients since last March about problems with their parents’ aged care homes, has nothing but praise for the home.

“We have a great manager, Jenny, and she is really invested in the residents,” Ms Soorkia said. “We got a text message during the night when they first knew that somebody had come down with it.”

To Ms Soorkia’s relief, her mother has now been fully vaccinated, and she had assumed that all workers in the nursing home would be vaccinated too.

However, it was revealed on Tuesday that some of the Maidstone staff would be offered their first doses on Monday.

Among other aged care homes affected is Gary Smorgon House in Caulfield. On Tuesday morning operator Jewish Care told relatives it had locked down the centre because on Friday a staff member had worked at BlueCross Western Gardens in Sunshine – where there was a positive coronavirus case – and then started her first shift at Gary Smorgon House “after having chosen [it] as her single employer”.

Dr Hume said at least half of the staff at the aged care where homes she worked were not fully vaccinated and the vast majority were aged under 50 and had struggled to source their own Pfizer doses at hospital hubs.

”It is just inexcusable,” she said. “Here we are again after having more than 600 people die in aged care last year. We have had months and months to immunise the entire workforce and the entire population in aged care.”

Dr Hume is trying to source extra vaccine doses from her medical clinic so she can vaccinate residents herself.

“We only have AstraZeneca, so it will take me weeks to get them their first dose and it will be another 12 weeks until they are fully vaccinated,” she said.

“The government has mucked this up from the beginning by not allowing general practice to oversee the vaccine rollout in aged care homes like we do every single year with the flu vaccine.”

Sachin Patel, a Melbourne GP who specialises in aged care, said just two or three weeks into the program the vaccination of staff stopped.

Dr Patel said he and other GPs were contacted by aged care facilities saying they had employees who had received their first vaccine dose via a contractor but were later told a second dose wouldn’t be administered by the company.

He said the workers were left to fend for themselves, as no one acted when the staff vaccination program was abandoned.

“Then we had this situation where people were vaccinated by this private service, but it wasn’t registered on the immunisation register. So then they were getting turned away from actually having their second vaccine, because they were told, ‘You’ve not had your vaccine,’ ” he said.

“That’s incompetence to a high degree.”

To counter the growing threat that the virus would seed itself in aged care homes again, the Victorian government announced on Tuesday it will fast-track COVID vaccinations for aged care and disability workers as part of a five-day blitz.

Workers in private aged care facilities and the residential disability sector, which are managed by the Commonwealth, will be given priority access at walk-in vaccination hubs.

According to Australia’s COVID-19 vaccination policy, new residents to aged care homes are “strongly encouraged” to receive both doses before taking up residence.

The policy outlines that residents needing both doses of a vaccine can receive an AstraZeneca shot through a general practice, visiting GP or Commonwealth vaccination clinic. “As the COVID-19 vaccine rollout progresses, advice will be given if other options for vaccination become available,” the policy states.