Albanian organised crime gangs are smuggling male migrants ‘in designer gear with prison haircuts and tattoos’ to the UK and ‘use Rwanda policy as a marketing tool’ – and slash prices from £10,000 to just £4,000

And the Government’s proposed plans to send migrants to Rwanda are also said to be being used by smuggling gangs as a marketing tool – with them urging people to ‘get over here now’ before the policy comes into place.

A price of £4,000 now appears to be the cost according a recent TikTok post in Albanian and English that offered departures every day – which is a significant reduction on a figure of about £10,000 at the same time last year.

More migrants arrived across the Channel in August than in the whole of 2020, with final figures for the month showing 8,644 people reached Britain in small boats from northern France, compared with 8,410 in all of 2020.

This summer’s huge increase has been driven by large numbers of Albanian migrants making the treacherous journey aboard sub-standard dinghies and rigid inflatables. Home Office officials have said more than 6,000 Albanians have arrived so far this year, compared with less than 900 in the previous three years combined.

One immigration expert said the numbers of arrivals in the last few weeks have been ‘absolutely unprecedented’ both in terms of those coming in any one day but also the number now being crammed into any one boat.

Lucy Moreton, head of the Immigration Service Union, which represents UK Border Force staff, said today that the lower price shows that it is a ‘very well established, almost commercial route of entry into the UK now’. 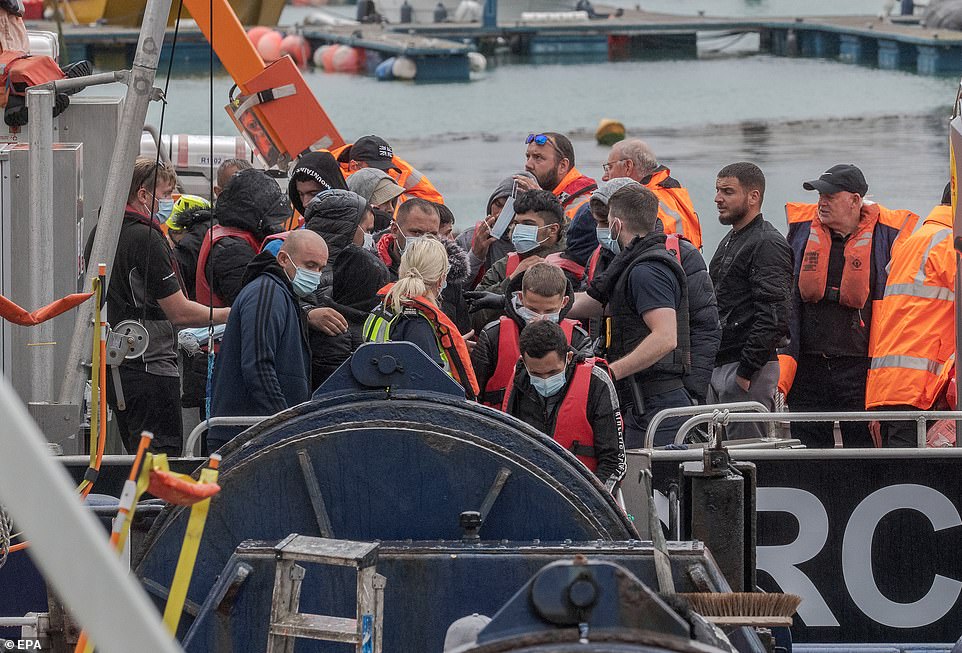 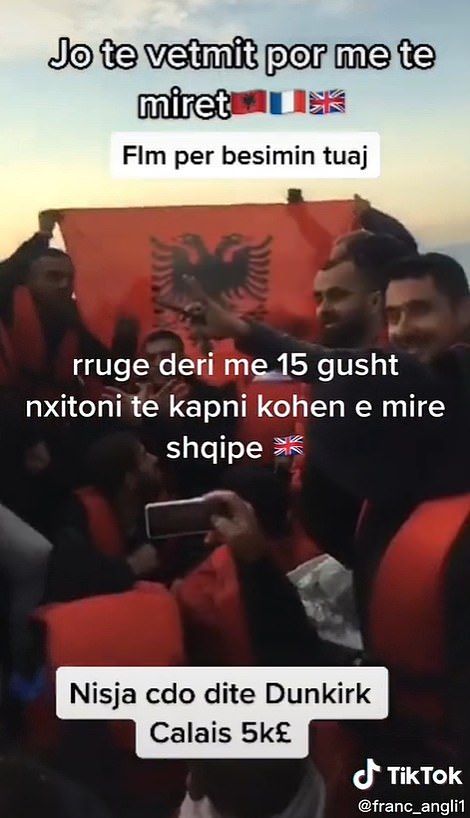 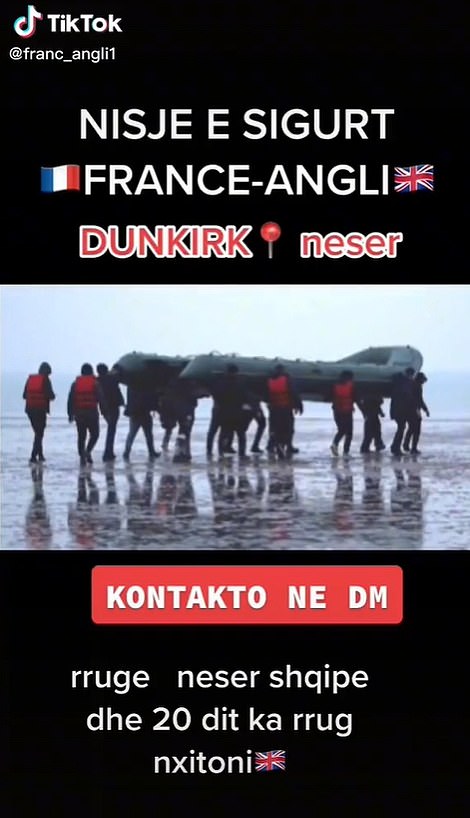 TikTok accounts have posted videos offering migrants safe passage in a dinghy from France to Britain for £5,000 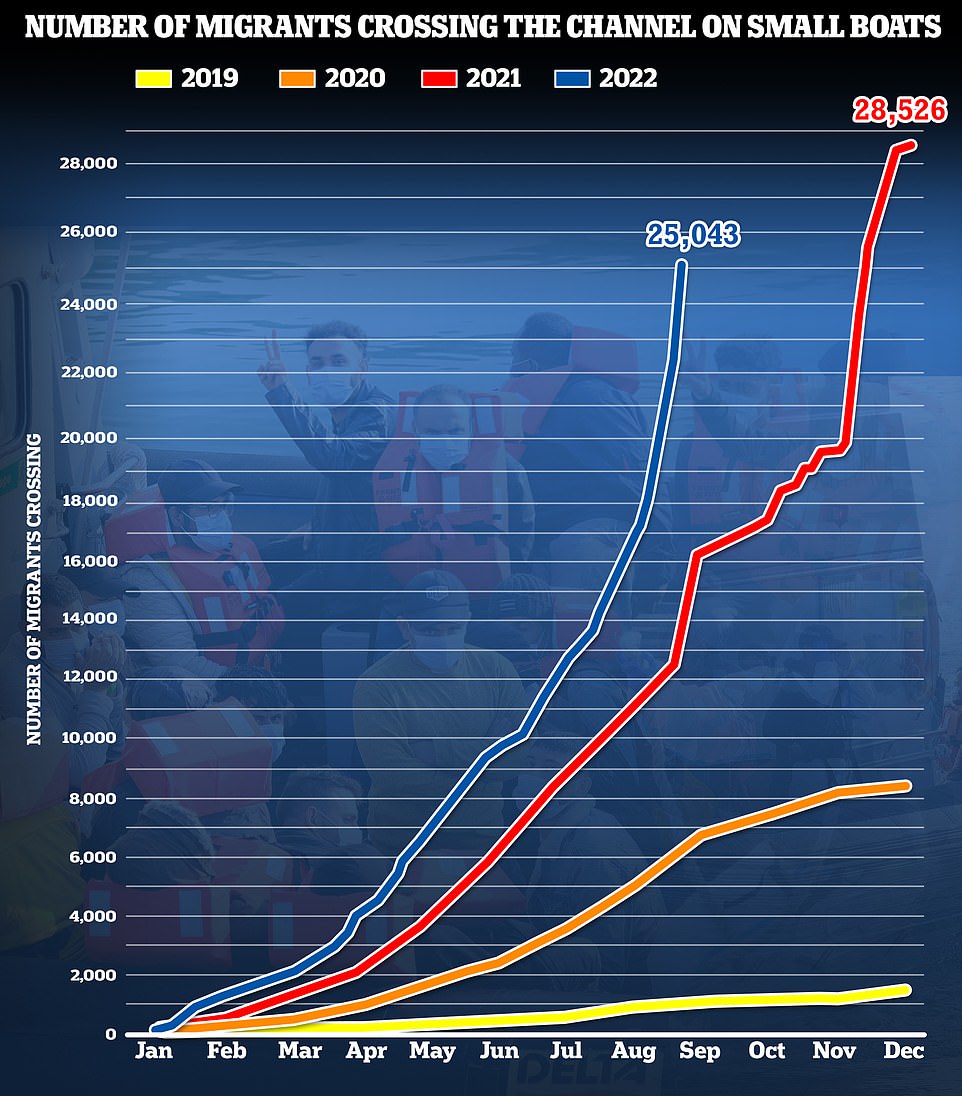 Asked why so many Albanians were arriving, she told BBC Radio 4’s Today programme: ‘There’s no universally agreed reason why this has happened. We know that Albanian criminals have been involved in this route for some time, and it is a natural progression that it will gravitate toward individuals who speak the same language.

‘There’s some speculation it has to do with the effectiveness of action against organised crime inside the UK and that these individuals are coming in to replace those who have been arrested or otherwise removed, but every individual that travels has their own reason. The demographic is completely different now.

Campaigners have called on the Government to abandon its plan to send migrants to Rwanda and free those awaiting removal from detention.

Charity Medical Justice claimed to have evidence of the ‘harm inflicted’ on detainees who have been told they will be sent to the East African nation, arguing that their health and wellbeing has been ‘severely’ affected by the policy.

In April, Home Secretary Priti Patel signed what she described as a ‘world-first agreement’ with Rwanda in a bid to deter migrants from crossing the Channel. But the first deportation flight – due to take off on June 14 – was grounded amid legal challenges.

Several asylum seekers, the Public and Commercial Services Union and charities Care4Calais, Detention Action and Asylum Aid are questioning the legality of the Home Office policy, with the next court hearing due to take place on Monday.

As it published a report today, Medical Justice said: ‘The policy is damaging in general for anyone, acutely so for such vulnerable torture and trafficking survivors who are already paying a high human cost even before any flights have taken off to Rwanda. The first removal flight to Rwanda was halted. Yet the health and wellbeing of those targeted has already been severely impacted.’

Director Emma Ginn said: ‘Medical Justice calls for the immediate and urgent release from indefinite immigration detention of all those targeted with removal for Rwanda, and for the policy to be abandoned.’

The charity said its doctors, who visit and assess the health of detainees in immigration removal centres, had ‘described the severe impact of the threat of removal to Rwanda on mental health’. Medical Justice doctors found ‘extremely high rates of evidence of torture, trafficking and other vulnerabilities’ in the group due to be removed, according to the findings.

A Home Office spokesman said: ‘The Medical Justice report features a number of inaccuracies and misrepresentations about the policy which we have previously addressed.

‘We have been clear from the start that no one will be relocated if it is unsafe or inappropriate for them, and our thorough assessment of Rwanda has found that it is a fundamentally safe and secure country, with a track record of supporting asylum seekers.

‘Through this world-leading Migration Partnership, those arriving in the UK illegally via dangerous and unnecessary routes may be relocated to Rwanda to claim asylum and have the chance to rebuild their lives there.’

‘We used to see the normal nationalities that you would see – we would see a reasonable rate of women and children, still a minority, but they were there.

Asked whether there was evidence that the proposed policy of sending migrants to Rwanda was becoming a deterrent, Ms Moreton replied: ‘No, none whatsoever. Conversely it’s actually being used as a marketing tool – get over here now, before that policy comes into place.

‘And the reasons to avoid or evade being sent to Rwanda or indeed back to Albania if that happens are really quite extensive, so it’s not likely to do more than just ruffle the edges.’

And one woman who lives on the Kent coast at Dungeness spoke of her fear over migrants who arriving in the UK without an escort from Border Force officers.

She told BBC Radio 4: ‘It’s potentially dangerous for these people to land here – from the point of view of the people who live here it is, because we don’t who they are, we don’t know where they’re from.

‘It’s actually quite daunting when you’re on the beach and you see them marching up there in great numbers. Most of whom are wearing designer clothes, there doesn’t seem to be any sign of poverty, any sign of humility that you might expect from refugees.’

The woman added that they had also been seen at night with torches as they run across the shingle, with scouts waiting on the beach for them ‘with pre-arranged transport waiting to pick them up’.

She continued: ‘This is what people don’t understand. It’s not all about Border Force and RNLI, it really isn’t. There’s a lot of it happening under the radar.’

Also today, the National Crime Agency said it is having a ‘real impact’ on tackling organised crime gangs who are suspected of using small boat crossings to carry out people smuggling across the Channel.

Andrea Wilson, deputy director of threat leadership at the agency, spoke about the rising numbers of crossings over the summer.

She told BBC Radio 4: ‘The numbers are extraordinary and that is a challenge for all of us involved in the tackling of organised immigration crime, specifically the small boats area. So working with our partners, as I’ve described both here and overseas, we are absolutely having an impact.

‘Whether we will ever stop the crossings, if I had the answer to that, that would be wonderful. But we are all certainly collectively having a very good go at it and a very good impact.’

The National Crime Agency also said the 40 arrests it made in July were largely of people suspected of being involved in people smuggling.

Branch commander Matt Rivers told BBC Radio 4: ‘We have a number of arrivals, but the arrests (are) of those really behind the migrant transfers. We haven’t arrested every group as of yet. We’re working on as many groups as we can identify where the intelligence leads us. 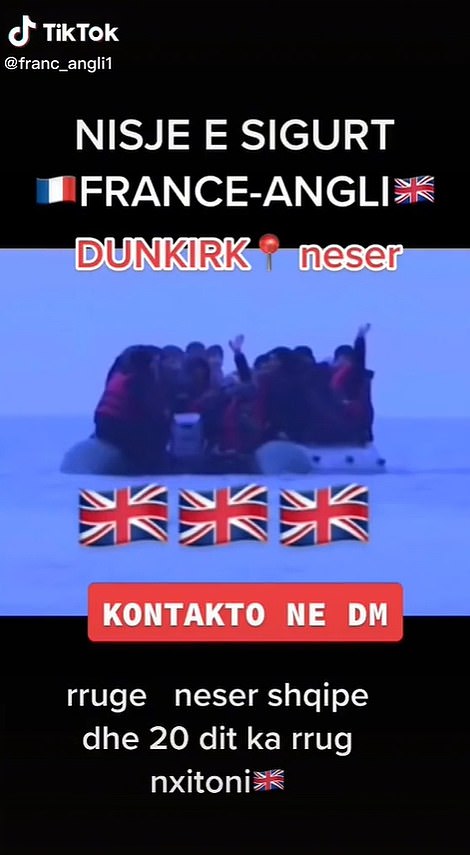 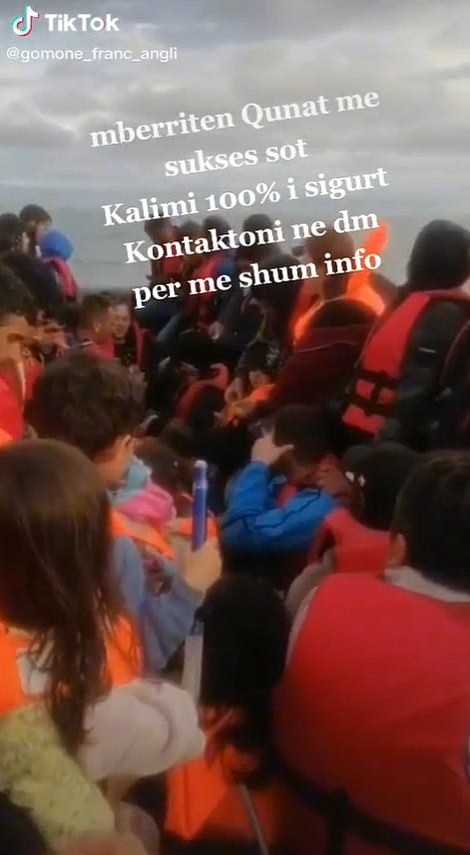 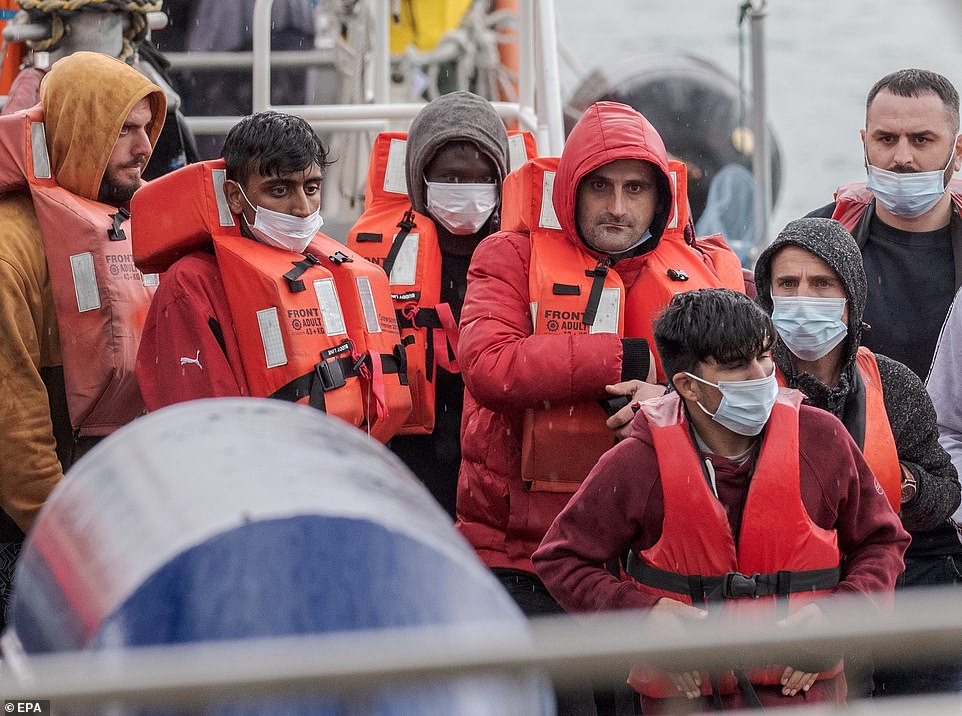 ‘We did have a large impact over the summer and we will have further impacts as we continue.’

He added that he imagined a ‘large majority’ of the arrests would be prosecuted.

More migrants crossed Channel in August than in the WHOLE of 2020: More than 8,600 arrived in UK on small boats taking total for year to more than 25,000

More migrants arrived across the Channel during August than in the whole of 2020.

Final figures for the month showed 8,644 people reached Britain in small boats from northern France, compared with 8,410 in the whole of 2020.

It follows a surge which saw numbers rise to 28,526 last year, and further rises so far this year.

August was the busiest month on record, smashing the previous monthly high of 6,869 set last November.

So far this year, 25,043 migrants have reached the UK by small boat, just over double the number seen at the same point last year.

This summer’s huge increase has been driven by large numbers of Albanian migrants making the treacherous journey aboard sub-standard dinghies and rigid inflatables.

Home Office officials have said more than 6,000 Albanians have arrived so far this year, compared with less than 900 in the previous three years combined.

The finalised arrivals figures for August differ slightly from figures published at the weekend following amendments by the Ministry of Defence, which took overall command of UK Channel operations earlier this year.

Questioned on how many prosecutions were ongoing for people smuggling, Mr Rivers said: ‘The NCA is involved in approximately 60 investigations at this time. Some are ready to be taken to court. Some are just starting.’

Ms Wilson added that reports of an increase in arrivals of Albanians on boats crossing the Channel was accurate, and whether or not they are involved in organised crime is ‘part of the assessment process’.

It comes as figures for August showed 8,644 people reached Britain in small boats from France, compared with 8,410 in the whole of 2020. It follows a surge which saw numbers rise to 28,526 last year, and further rises so far this year.

August was the busiest month on record, smashing the previous monthly high of 6,869 set last November. So far this year, 25,043 migrants have reached the UK by small boat, just over double the number seen at the same point last year.

Home Secretary Priti Patel is set to finalise details of a new deal with the Albanian government which will be designed to ‘fast-track’ the removal of their nationals back to Tirana.

‘They are asylum shopping – making attempts to claim asylum in the hope they can remain here and disappear into the criminal underworld fuelled by Albanian gangs. We will bring this to an end.’

Albanian officials are believed to have yesterday toured Dover docks and other locations used by the Home Office to process Channel arrivals.

In liaison with the Home Office, they are understood to be working on details of how to implement a plan to send Albanian migrants home ‘within days’.

It will include cross-checking fingerprints and other biometrics with Albanian police databases.

Miss Patel’s deal with Rwanda, which will see ‘irregular’ migrants from Britain handed a one-way ticket to the east African nation to claim asylum there instead of in the UK, remains in legal limbo.

The first attempt at sending migrants to Rwanda was blocked at the 11th-hour by the European Court of Human Rights on June 14.

The Home Office faces a legal challenge in the High Court next week over the legality of the policy. 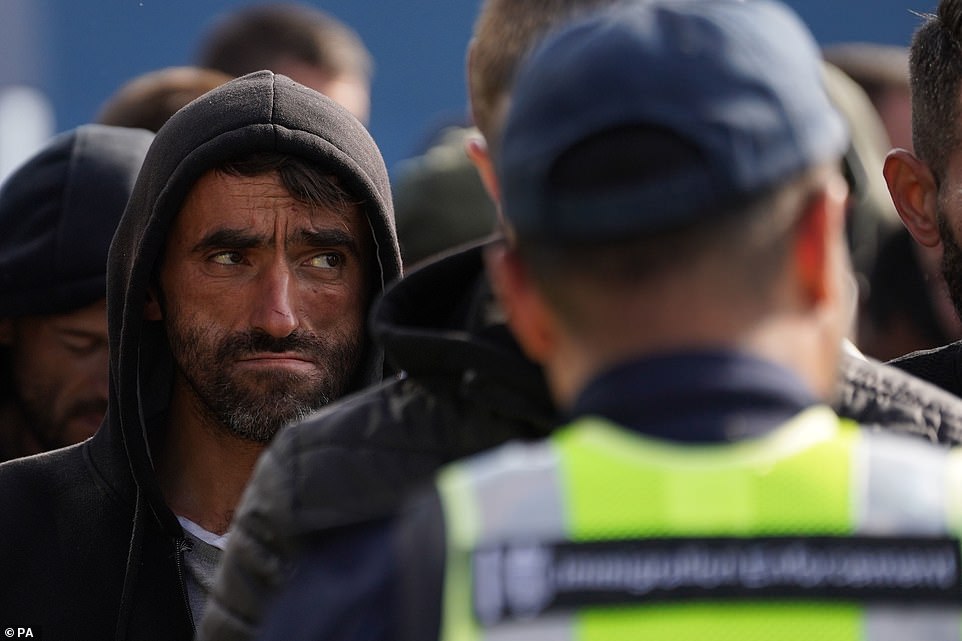 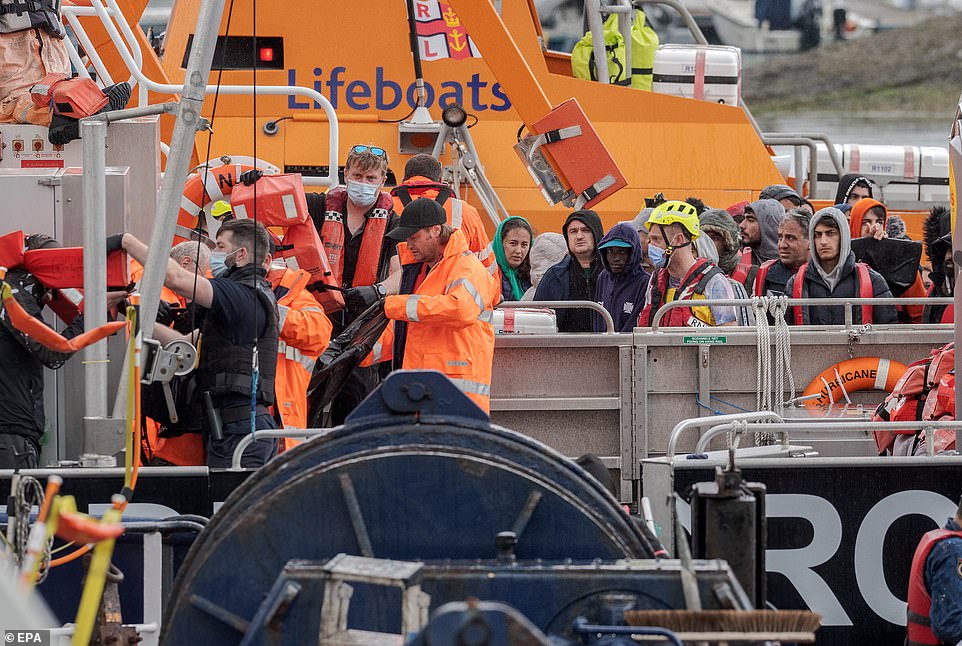 Pro-migrant charities and a trade union which represents the majority of Border Force staff have secured a judicial review of the Rwanda agreement, beginning on Monday.

It is due to last all week, with a separate hearing scheduled for October.

The legal delays mean that even if the Home Office is successful in court, a renewed attempt at Rwanda flights is unlikely to be possible until November.

The finalised arrivals figures for August differ slightly from figures published at the weekend following amendments by the Ministry of Defence, which took overall command of UK Channel operations earlier this year.

There have been no crossings since Saturday, when 915 arrived, due to choppy conditions in the Channel.