Washington: Longtime televangelist Pat Robertson decried Alabama's new abortion ban as "extreme," saying on his show on Wednesday that the state legislature has "gone too far." 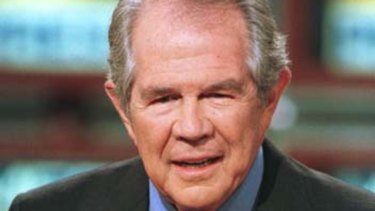 Alabama's law, which has been passed by the legislature and signed by the governor, includes a penalty of up to 99 years in prison for doctors who perform abortions and has no exceptions for rape or incest, Robertson noted on his show.

"They want to challenge Roe v Wade, but my humble view is I don't think that's the case I'd want to bring to the Supreme Court because I think this one will lose," Robertson told viewers of CBN's The 700 Club on Wednesday.

"God bless them, they're trying to do something," he said of Alabama legislators. Speaking before Alabama Governor Kay Ivey, signed the bill into law, Robertson said it would be "ill-considered," though he also denounced the Roe ruling.

Robertson has used his show to regularly praise US President Donald Trump during his campaign and since his election. 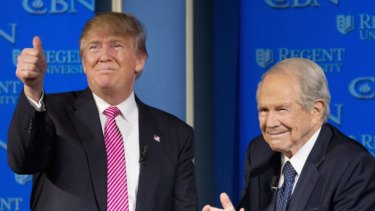 He is widely known for making controversial remarks on his show, predicting earlier this week that the Equality Act, which aims to extend federal protections to LGBT Americans, would bring God's judgment.

A longtime abortion opponent, Robertson reflects a divide among those who share the goal of overturning Roe v Wade but believe in different political and legal approaches to making it happen.

Some abortion opponents have been working incrementally at the state levels on laws like parental notice and ultrasound requirements, while other activists have wanted to take a more aggressive approach that could challenge Roe more directly.

Abortion opponents have been pleased with Trump's picks for the Supreme Court, where they believe justices are more likely to oppose abortion rights.

In its 1973 Roe decision, the court ruled that states may not restrict abortion before the fetus is viable, usually around 23 or 24 weeks of pregnancy. Sixteen states have passed or are working to pass "heartbeat bills" that would ban abortions around the time a doctor can detect a heartbeat, usually about six weeks.

The strategy has been viewed as more extreme by some, and such laws would likely be struck down by lower courts.

Alabama's law is a blatant attempt at getting the Supreme Court to revisit Roe, said Mary Ziegler, a professor at Florida State University College of Law who has written on abortion.

"For Alabama legislators, maybe it's good for them and their own constituents," said Ziegler, who expects the law to be energising for abortion rights proponents. "If you're looking at national anti-abortion strategy, it might've been a misfire." 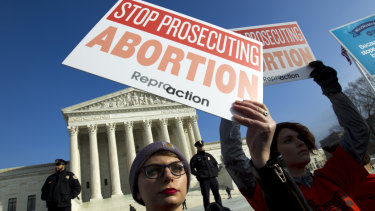 Abortion rights activists protest US Supreme Court during the March for Life in Washington. Credit:AP

Alabama Representative Terri Collins wanted the legislation to be strong enough to force federal court intervention, so it could not include exceptions for rape and incest, said.

"It has to be 100 per cent a person at conception," Collins said.

According to a 2014 Pew Research Centre survey, 54 per cent of Alabama adults said abortion should be illegal in most or all cases – one of the highest proportions in the country – while 40 per cent said it should be legal in all or most cases.

Most observers expect the Supreme Court to take up abortion bans that are less sweeping than Alabama's, such as cases involving abortion bans at 20 weeks or a law reducing the number of abortion clinics, incremental steps that could eventually lead to a major challenge of Roe v Wade.

Richard Garnett, a law professor at the University of Notre Dame, said in an email that Alabama's proposal will likely not be considered by the Supreme Court when the justices could consider less dramatic measures, such as limiting late-term abortions or abortions targeting disabilities.

The justices, Garnett said, "might well prefer to first consider less sweeping abortion regulations and to uphold them even under the current doctrine."

The Alabama law was cheered by some activists who oppose abortion, including Susan B. Anthony List President Marjorie Dannenfelser, who called the legislation "a landmark victory for the people of Alabama."

"The American people want a fresh debate and a new direction, achieved by consensus and built on love for both mothers and babies," she said in a statement. "The time is coming for the Supreme Court to let that debate go forward."

Some abortion opponents are worried about unintended consequences of abortion legislation that could end up failing in the lower courts.

In Tennessee, Catholic bishops opposed a "heartbeat bill" proposal earlier this year, warning that the state could have to pay hundreds of thousands of dollars in attorney fees if Planned Parenthood sued and won over the measure. That bill failed to move forward in the state legislature.

Alabama was forced to pay the ACLU and Planned Parenthood $US1.7 million in 2016 after a law requiring abortion providers to have hospital admitting privileges was struck down by federal courts.

Nationally, support for allowing abortions depends heavily on the circumstances and times during which they are sought.

A Gallup survey in May 2018 found that people overwhelmingly think abortion should be legal when the woman's life is endangered in both the first trimester (75 per cent) and third trimester (83 per cent).

In the case of rape or incest or if the child would be born with a life-threatening illness, at least two-thirds say such abortions should be legal in the first trimester, but that drops to about half of adults who say the same if it occurs during the third trimester.

Forty-five per cent say abortion should be legal for "any reason" in the first trimester v 20 per cent in the third trimester.