Two aged care homes founded by a pair of bankrupt brothers convicted of appalling animal cruelty will be shut down after amassing potential debts of almost $25 million – with more than 60 elderly residents forced to find new accommodation.

A liquidator has been unable to account for more than $16 million in deposits made by residents or their families, while about 70 creditors are owed more than $7.5 million following the collapse of Chronos Care in July. 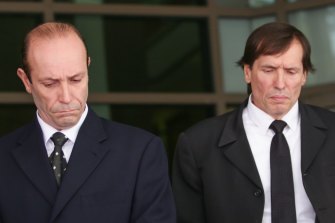 Brothers Chris (left) and Gerry Apostolatos , outside court in 2015 when they were convicted of animal cruelty offences.Credit:Jason South

About 130 employees at the aged care homes in Alphington and Mount Eliza are also owed almost $1 million in entitlements and face redundancy when both facilities close on January 28 next year.

A report by liquidator PCI Partners identified several potential breaches of prudential regulations and director’s duties, including a claim the business was insolvent at least six months before managing director Rita Kohu put it into administration.

Mali Nominees had just $71 in the bank when it was placed in administration on July 30.

Ms Kohu is the step-daughter of Gerry Apostolatos, who founded Chronos Care with his brother Chris Apostolatos in 2014, when both men were bankrupt with combined debts of more than $5 million.

An investigation by The Age in February revealed the brothers previously faced serious animal cruelty charges over the shocking mistreatment of more than 1 million chickens. They pleaded guilty in March 2015 – about five months after they purchased the Mount Eliza aged care home known as Ranelagh.

The pair used aliases, dummy directors and a family trust to conceal their involvement in Chronos Care, while also siphoning funds from the business to pay for their mortgages, holidays and luxury cars.

Ms Kohu, who did not respond to requests for comment, has also been linked to an irregular sharemarket transaction, just months before the collapse of Chronos Care and its holding company Mali Nominees, according to the PCI Partners report.

Ms Kohu instructed the company’s stockbroker to sell down the remainder of a share portfolio held under Mali Nominees in February, which resulted in proceeds of almost $800,000.

The company previously provided instructions to deposit sale proceeds into a Mali Nominees account, but Ms Kohu sent an email on February 17 instructing the broker to deposit the funds into her private account, according to the PCI Partners report released on November 23.

“Ms Kohu has advised that the funds were subsequently used for company purposes including repayment of RAD (refundable accommodation deposits) liability … I have obtained the bank statements which, on a preliminary view, support Ms Kohu’s assertions, however a detailed review will be undertaken by me into these transactions,” the liquidator said in the report.

The liquidator, along with forensic accountants, are also examining a series of inter-company loans, valued at more than $11.5 million, between several corporate entities linked to Ms Kohu, including more than $3.8 million transferred to the Rita Kohu Family Trust.

The disposal of two cars, both Mercedes, before the company was put into administration will also be examined by the liquidator.

The collapse of Chronos Care has devastated staff and residents at both facilities, with many furious about the involvement of the Apostolatos brothers and the federal government’s failure to adequately regulate the sector.

He said he could not understand how more than $16 million in refundable accommodation deposits could not be accounted for by liquidators and forensic accountants almost four months after their appointment.

“This has all happened because the federal government gave the operating licence to two bankrupt chicken farmers. In other words, their negligence and incompetence has caused the whole problem,” Dr O’Ryan said.

“This could be fixed in one single stroke by the health minister Greg Hunt. But so far, he has refused to consider this option.”

Recent attempts by the liquidator to sell the facilities in Alphington and Mount Eliza were unsuccessful because prospective buyers were unwilling to take on the liability of having to repay the deposits of existing residents.

Fee Sievers has been the lifestyle and activities coordinator at the Alphington facility for the past six years.

She said she was disgusted by the collapse of the company and feared several vulnerable residents would not survive the move to another home.

“We all hoped someone would buy both homes, and we could all stay together and save our residents the cruelty of having to move. We are furious with the owners, but also with the government for allowing them to access the bonds that families thought were secure and untouchable.”

Michael Rosen among staycationers to have trips pulled at last minute