St Petersburg: Under the watch of a ceremonial honour guard, the bride walked slowly down the aisle as a flock of young attendants held her seven-metre train aloft. The groom, clad in black coattails, stood expectantly under the golden dome of St Isaac’s Cathedral as his mother watched from a throne-like marble enclosure.

“The Romanovs are back,” a conservative Russian news outlet announced on Friday, and with wedding rings by Fabergé, a tiara by French jeweller Chaumet, and an Imperial eagle embroidered onto the veil, it certainly seemed like they had returned in style. 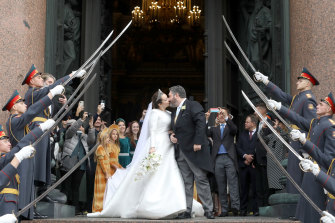 The wedding of Grand Duke George Mikhailovich of Russia, a descendant of the Romanov dynasty, and Rebecca (Victoria) Bettarini of Italy at St Isaac’s Cathedral, St Petersburg, on Friday.Credit:Getty Images

More than a century after the last tsar and tsarina – Emperor Nicholas II and his wife Alexandra – were assassinated in the wake of the Bolshevik revolution, a collection of Europe’s noble families gathered to celebrate Russia’s first royal wedding since the days of the imperial monarchy. The groom was Grand Duke George Mikhailovich Romanov, 40, a descendant of the Russian imperial throne, and his Italian partner was Rebecca Romanovna Bettarini, 39.

Assembled aristocrats wore fur, feather hats and fascinators as they watched a host of golden-clad priests bless the union.

The Romanovs have had no official legal standing in Russia since the dynasty was overthrown in 1917, and they don’t seek to return to the throne. But the wedding represents the pinnacle of their attempts to reestablish themselves in the country’s public life since the fall of communism 30 years ago, and perhaps return a sense of imperial glory to Russia.

“This is a tremendously significant historical event for one of the world’s most consequential dynasties,” said Russell Martin, a history professor at Westminster College in Pennsylvania, with overstatement that seemed fitting for an occasion draped in opulence. Martin, who wrote a book on Romanov wedding traditions, is a volunteer adviser to the family who helped ensure the ceremony was in keeping with royal tradition. 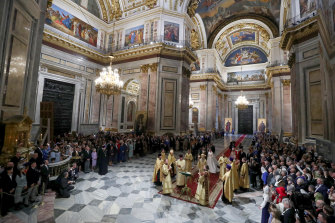 Among the list of royal attendees were Princess Leia of Belgium, Queen Sofia of Spain, Prince Rudolph and Princess Tilsim of Liechtenstein, and the last tsar of Bulgaria, Simeon II.

The groom said the wedding was part of a chain of unlikely events that his family could not foresee when he was born in 1981 in Madrid. He is the great-grandson of the cousin of the last Russian emperor, Nicholas II, Grand Duke Kirill Vladimirovich Romanov.

“No member of the Romanov family ever thought we would come back here,” he said in an interview on the eve of the nuptials.

Raised in both Spain and France, Romanov was educated at Oxford and worked for several European Union institutions as well as Russian mining giant Norilsk Nickel group before starting his own consultancy. According to his official biography, he is related to every royal family in Europe.

He and Bettarini, now Romanovna, began dating while they lived in Brussels, but the pair moved to Moscow two years ago to run the philanthropic foundation they established together in 2013. Bettarini, who also founded a consulting company, said in an interview that she wrote two novels during the COVID-19 pandemic, including one called Aristocrazy. 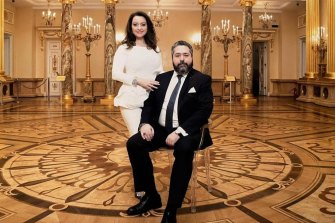 Romanov first travelled to Russia as an 11-year-old, for the funeral of his grandfather, Grand Duke Vladimir Kirillovich Romanov, in 1992. Born in Finland by happenstance, Vladimir and his family had escaped the fate suffered by Nicholas II and Alexandra, and their children and relatives: execution in 1918 at the hands of the Bolsheviks who had taken over Russia.

The wedding on Friday represents, at least in part, the evolving memory of the Russian empire and the family that ruled it for 300 years. Under communism, the Romanovs were often portrayed as backward and responsible for familial and societal collapse. But since the 1990s, the family’s legacy has been embraced by the powerful Russian Orthodox Church, which canonised Nicholas II, Alexandra and their five children in 2000.

“The veneration of the royal family is the embodiment of this monarchist attitude that exists in the church,” said Andrei Zolotov, a Russian journalist who has covered the Orthodox Church for three decades. 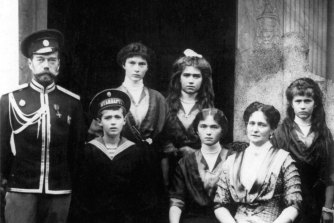 Tsar Nicholas II and his family were executed in 1918.Credit:Alamy/File

In 2008, 90 years after they were executed, the Romanovs were legally “rehabilitated”, or recognised as victims of “unfounded repression” rather than as enemies of state.

The modern Romanov’s union was blessed by the Russian Orthodox Church’s top official in St Petersburg, Metropolitan Varsonofy, and Romanov’s mother, Grand Duchess Maria Vladimirovna. While the leadership of the church recognises Vladimirovna’s claim to the throne, there are other Romanovs who dispute it. The bride converted to Russian Orthodoxy and took the name Victoria Romanovna. She is not of noble blood and her mother-in-law decided to limit her access to royal titles.

During the ceremony, in keeping with Russian Orthodox tradition, friends and relatives of the bride and groom took turns holding crowns above their heads. 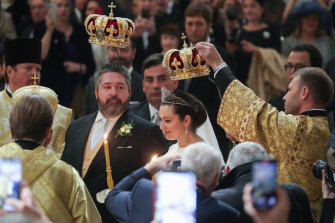 Despite the grandeur, the three-day wedding extravaganza featured controversial elements. Among the men in Romanov’s coterie was Konstantin Malofeev, a conservative businessman who has been an ardent advocate for a return to monarchy since falling in love with The Lord of the Rings as a teen. As a law student, he wrote his dissertation on legal avenues to restore Russian royalty.

But Malofeev has been under US and EU sanctions since 2014 for allegedly funding pro-Russian separatists fighting in Ukraine.

In an interview, he said he was delighted at what the couple’s wedding represents to conservatives.

“This wedding is a restoration of tradition,” he said, adding the nuptials and the re-emergence of the Romanovs, should not be viewed through the prism of politics.

“This is not about current political events. This is the heritage of Europe. The families present here built Europe as we know it.”

Malofeev is believed to be well-connected to the Kremlin, as is Yevgeny Prigozhin, known as Vladimir “Putin’s chef”, who owns the catering business that provided food for some of the wedding events. Prigozhin was indicted by US prosecutors for alleged connections to a troll factory that investigators say spearheaded Russian fake news efforts to meddle in the 2016 US election. This year he was added to the FBI’s “wanted list”.

Despite connections to Kremlin-linked officials, and a tacit government consent for a limited monarchial presence, Moscow’s response to the wedding was tepid.

“Putin doesn’t plan to congratulate the newlyweds,” said President Vladimir Putin’s spokesman, Dmitry Peskov, whose daughter attended the celebration. “This wedding has nothing to do with our agenda.”

Support for a return to the monarchy in Russia is mixed. According to the independent Levada Centre, only 3 per cent of respondents to a 2016 survey said they would support a return to the pre-1917 monarchic system. ​​A survey the following year by the state-owned VTsIOM found that 68 per cent of Russians are “categorically against autocracy as a form of government,” though the same number of people aged 18-34 were “tolerant” of the idea of monarchy.

Across the street from the cathedral, Olga, 57, was giddily taking photos of the wedding guests as they emerged.

“I wish I had known in advance about the wedding, I would have come earlier to see the event,” she lamented, declining to provide her last name. She said she would favour the type of constitutional monarchy the United Kingdom has, in which the royal family plays a ceremonial role above politics.

Zolotov, the journalist, said some Russians were not impressed with what 30 years of democracy had delivered, and wouldn’t mind giving a different model a try, though not necessarily with the Romanovs again.

“The idea is very attractive to some because of the pervasive perception that ‘democracy doesn’t work anyway’,” he said, noting that the transition from communism to capitalism during the 1990s remains a source of national trauma, and that Russia after two decades of Putin’s rule is hardly democratic.

“The perception is, ‘Whatever system you have you end up with a tsar anyway, that the Russian people deep down have a monarchist mentality,’” he said.

This article originally appeared in The New York Times