On Thursday, prominent lockdown protest celebrities Monica Smit and Avi Yemini returned to their home away from home – the Magistrates Court.

It’s been a heck of a couple of months for Smit, the anti-lockdown and anti-vax activist who last month preferred to remain in prison than agree to a magistrate’s bail conditions. She returns to court on November 10 over charges of incitement and breaching public health orders during two lockdown protests in August. Meanwhile, alt-right activist Yemini graced this column yesterday after settling a Federal Court defamation action lodged by criminal lawyer Zarah Garde-Wilson. 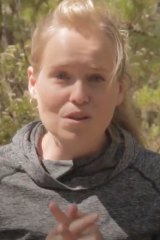 Yemini, a correspondent for alt-right website Rebel News, had posted a picture of Garde-Wilson on the site with the headline: “ARRESTED AND CHARGED FOR THREAT TO KILL”.

Rebel News agreed to remove this from its site and make clear it that neither Garde-Wilson nor her video blogging husband, Lansley Simon, were charged with threatening to kill.

Thurday’s matter was a hearing into an interim intervention order against Simon, known as Lucky Lance. Smit and Yemini have applied for the order and are representing themselves.

In January, an intervention order against Simon filed by police was struck out by a magistrate, but second time around the application for the personal safety IVO against Simon is dragging on.

Due to the sheer volume of online videos presented to Magistrate Greg Connellan, barrister Tania Bolton, for Simon, had barely begun her cross-examination of Yemini before the case was adjourned until March 1. Tickets are available via Eventbrite.

Given that Rebel News has agreed to acknowledge that Simon was never charged with threatening to kill, the speedy resolution of Garde-Wilson and Simon’s defamation action means this information can now be used in the IVO case. 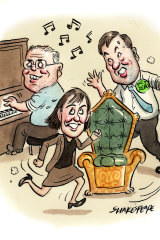 There’s a modest Games of Thrones under way for Federal Parliament’s own Iron Throne — chairing the House of Representatives Standing Committee on Economics.

This was the preserve of franking credits warrior Tim Wilson. The Melbourne MP’s adroit use of the post saw him elevated to the giddy heights of Assistant Minister for Industry, Energy and Emissions Reduction. Clearly, going after industry super funds really pays off.

So who will get the gig? Committee member Jason ”For the Beaches” Falinski, the MP for the Sydney Northern Beaches seat of Mackellar, is said to reckon he is the leading contender. It is less clear if anyone else thinks that.

But hold your horses, Falinski. The Baratheon-esque MP’s push for a net zero emissions target doth not a good friend of Prime Minister Scott Morrison make, given the PM’s office delights in hurting its enemies and promoting its friends.

Also stepping up to the chair is Perth’s member for Curtin, Celia Hammond.

But some Liberals feel she “doesn’t have enough experience”.

Well, she was formerly vice-chancellor of the University of Notre Dame no less.

Other Coalition members include Queenslander LNP members Julian Simmonds and keen amateur photographer Andrew Laming. No, we don’t think so either.

The appointment will be a captain’s pick by Morrison, and he might gift the post to someone not on the committee.

Time is running out as the appointment needs to be tabled in Parliament next week.

Biggest news in TV this week was the launch of Channel Seven’s 2020 schedule. Media journalists were surprised by the segment hosted by Katie McGrath, Seven’s chief people and culture officer, who spruiked the network’s commitment to cast diversity. Possibly a reaction to criticism of the network’s casting choices on its flagship SAS Australia reality-TV program, where bloggers have criticised the casting of various celebrities who have either been accused of or admitted violence against women.

Seven will have a better story to tell in 2022 when it broadcasts Claremont, the imaginatively titled drama about the 1990s serial killings in Perth. As Seven’s blurb states: “The disappearance of young women launches a 25-year investigation by the police and one tenacious journalist, all in dogged determination to seek justice.” 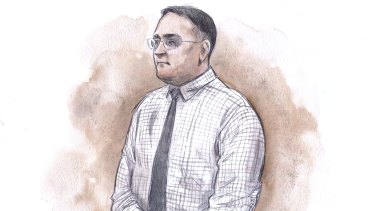 A sketch of Bradley Edwards, drawn during his sentencing on December 23, 2020.

So who is the tenacious journalist? Seven won’t say, but CBD has learnt that it is none other than legendary Perth Channel Seven courts and crime reporter Alison Fan who has been on the tools for Seven since 1971. In the 1990s, she covered the Claremont serial killings and then came back for last year’s trial which found Bradley Robert Edwards guilty of two counts of murder.

Fan became famous in 1989 when $1 million worth of gold was sent to her personally after more than a decade of covering the conviction and jailing of the Mickelberg brothers for the Perth Mint Swindle, which was later overturned.

Then there was the time a man on the run from police after a gun siege gave himself up to Fan. She has quite a story to tell.