Home » World News » A new weight-loss drug is having remarkable results. Could it also change the way we talk about obesity?

Scientists and advocates say new anti-obesity drugs generating remarkable levels of weight loss in clinical trials will once and for all dispel the myth that obesity is simply the result of making unhealthy choices, rather than a genuine disease.

The emergence of the new drug, marketed locally as Wegovy, promises to revolutionise weight-loss treatments. In one major clinical trial patients using the drug lost 11 per cent more body weight than those undergoing an intensive diet and exercise program. 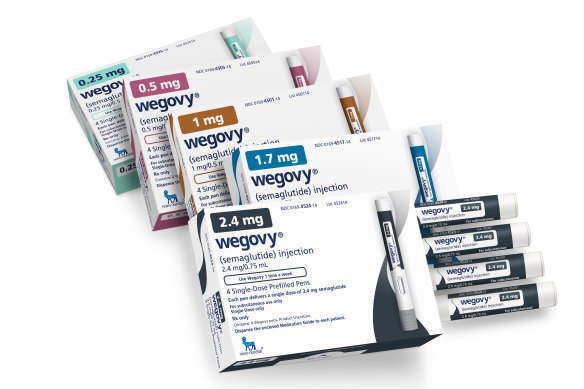 Scientists and campaigners have long rejected the popular narrative that obesity is solely the result of unhealthy choices. Wegovy’s dramatic results might provide the sort of black-and-white proof that convinces society at large, they hope, that it is a disease and needs to be treated as such.

“I think it will reframe the argument. As these drugs become more effective and available, it will be harder for people to ignore them,” said Professor Brian Oldfield, a leading obesity researcher at Monash University and editor of the field’s top academic journal.

Tiffany Petre, director of the Obesity Collective, said she “hopes this drug changes conversations about obesity in society”.

“People with obesity haven’t been able to get appropriate healthcare. Now there is something on the market.”

Governments around the world have poured hundreds millions of dollars into public health campaigns that aim to tackle obesity by encouraging healthy eating and exercise.

Then-prime minister John Howard in 2004, for example, rolled out a $116 million program to pay for after-school sports and healthy-eating education for families – while also rejecting plans to ban fast-food advertising in children’s TV programs.

While healthy eating and physical activity are vital for good health, decades of evidence suggest they simply do not lead to large amounts of weight loss, said Oldfield. “They are not enough by themselves. They typically give a 3 to 5 per cent reduction in body weight.” (Oldfield has received fees from the drug’s sponsor Novo Nordisk).

This problem shows up in a large trial of Wegovy published in JAMA early last year. Some 611 volunteers were given ‘Intensive Behavioral Therapy’: eight weeks on a supervised very-low-calorie diet, followed by more than a year of a low-calorie diet.

They were also asked to do 100 minutes of exercise a week, eventually increasing to 200 minutes, and received 30 visits from a dietitian. “That’s extreme and unsustainable,” said Oldfield.

Wegovy, which was approved by Australia’s medicines regulator for weight loss last year, mimics a natural hormone that slows down how fast the stomach works, making people feel fuller for longer. It also seems to affect how the brain regulates appetite.

The drug does come with side effects – particularly nausea – and in clinical trials about 6 per cent of volunteers are forced to drop out. Experts caution it is not a silver bullet and must be used alongside diet and exercise.

Several years ago, Professor Stephen Simpson, director of the Charles Perkins Centre at the University of Sydney, and his team ran a series of focus groups looking at how to change people’s opinions about the cause of obesity.

“People have this deep-seated view it is their fault, particularly those with living experience. It’s deeply held and pervasive,” he said.

This stigma has even shown up in the response to recent Wegovy shortages, said Simpson, with some seeking to blame people with obesity for seeking medical treatment for their condition.

The most-effective tool, he found in his focus groups, was to “smash the frame” – to disrupt people’s idea that obesity was caused by predominantly by bad choices.

“One of the most powerful ways of pushing back against that, we found out very quickly, is to say it is biological. There is a powerful biology that underpins obesity.” The success of Wegovy, he said, “is clearly indicating there is a profound biological underpinning”.