When marine scientist Jennifer Lavers undertakes fieldwork on Lord Howe Island, she’s surrounded by white sand beaches and subtropical mountain ranges in a biodiversity haven she describes as the “Galapagos of Australia”.

This pristine setting stands in stark contrast to the plastic refuse – sometimes numbering hundreds of pieces – that Dr Lavers finds in the regurgitated stomach contents of the two species of shearwaters she studies. 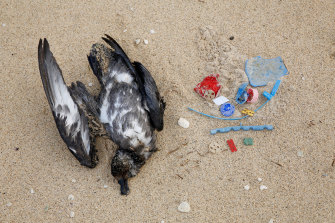 A dead petrel with plastics found inside its stomach on a beach at Lord Howe Island. Credit:Zoo Victoria

The contents includes a brightly coloured, sticky, chewing gum-like substance, the result of balloons interacting with digestive enzymes in the birds’ intestines to form an “amorphous glob”.

“As soon as you touch it, it sticks to everything,” says Dr Laver, who is a lecturer at the University of Tasmania. “It’s not rubber breaking down, but rather transforming into a disgusting, horrible mess that it’s almost impossible for birds to dislodge.”

An overhaul of Victoria’s environment laws, which took effect this month, means it is now illegal to release balloons outdoors, primarily because they are a dangerous pollutant for many marine species, particularly seabirds and turtles.

Releasing balloons into the environment will be classed as “littering”, with the Environment Protection Authority given powers to fine an individual $991, or a company $4956. For a series of balloon releases, the penalty could rise to $82,610 for a company. 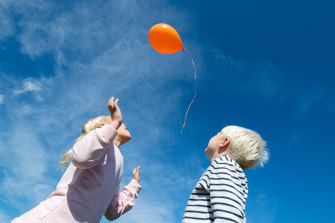 It is no longer legal to release a balloon outdoors in Victoria. Credit:Getty

Animals can be seriously harmed or killed by balloons and their attachments when they eat them, or become entangled. Balloons floating in the water can look like squid or jellyfish, and marine mammals, seabirds and turtles often mistake them for food.

Using the slogan “where balloons fly seabirds die”, Zoos Victoria and Phillip Island Nature Parks have been campaigning about the dangers of balloon litter since 2017.

Darcie Curruthers, the zoo’s conservation campaigns spokesperson, said while it was impossible to estimate how many birds had died from balloon ingestion, a study from the University of Tasmania and CSIRO found balloons are the highest-risk plastic debris item for seabirds, and are 32 times more likely to kill than ingesting hard plastics.

One of the most common causes of death was when seabirds skimmed balloons off the surface of the ocean and fed them to their young, Ms Curruthers said.

Almost 230,000 people signed up to the zoo’s campaign, promising to blow bubbles rather than release balloons outside, and 160 community groups and schools also signed up.

“Schools that used to do balloon releases at graduations or at fetes have changed their habits,” Ms Curruthers said.

Balloon release rules differ from state to state. Queensland banned outdoor release a decade ago and Western Australia made the shift more recently, but in NSW it is still legal to release up to 20 balloons outside.

The Balloon Artist and Suppliers Association of Victoria has, for a number of years, been pushing for a federal ban on outdoor balloon releases, said spokesperson Ray Stewart. This would be far more effective than laws being different in each state, he said.

While the Zoos Victoria campaign suggests people should blow bubbles instead, Mr Stewart said there were no directly comparable alternatives.

Balloon releases have long taken place at funerals, but replacing these with birds or butterfly releases was more expensive and raised ethical dilemmas. “There are no direct replacements, but that’s just something we have to let go of … not literally,” Mr Stewart said.

Latex balloons are often offered as an eco-friendly alternative, but Dr Lavers said her recent research revealed that after 16 weeks, latex balloons did not meaningfully degrade in freshwater, saltwater or industrial composting.

The Environment Protection Authority recommends against using balloons outdoors, and strongly securing them if you do. Accessories such as clips and ribbons should be disposed of. Alternatives include blowing bubbles, reusable bunting, paper decorations and planting a tree.

My boys, 12 and 9, were burnt to death by their dad in twisted act of revenge… it’s a disgrace he was ever let near them