Home » World News » 250,000 A-level students on social media as they get results today

‘Give me three A’s if you’re really sorry!’ 250,000 anxious A-level students take to social media as they prepare to get results today after Education Secretary Gavin Williamson apologise over exam chaos

Teenagers have been fretting and sharing their nerves on social media as they wait to find out their A-level results.

Beleaguered students across the country are waking up to their grades amid last-minute changes to appeals, with around one in four entries expected to be awarded the top marks.

Around 300,000 school leavers in England, Wales and Northern Ireland are receiving calculated grades to help them progress onto university, work or training after this summer’s exams were cancelled due to the pandemic.

But many are riddled with anxiety as they face the prospect of losing out on a place at their chosen university.

The Government announced late on Tuesday that students in England will have the ‘safety net’ of being able to use mock exam results as the basis for an appeal if they are higher than the calculated grade.

However, pupils in England will not be allowed to have their exam results upgraded when they are published today.

The Education Secretary has ruled out England following Scotland in accepting scores estimated by teachers.

Gavin Williamson said that allowing teachers’ grades to be used would ‘see students lose out.’ 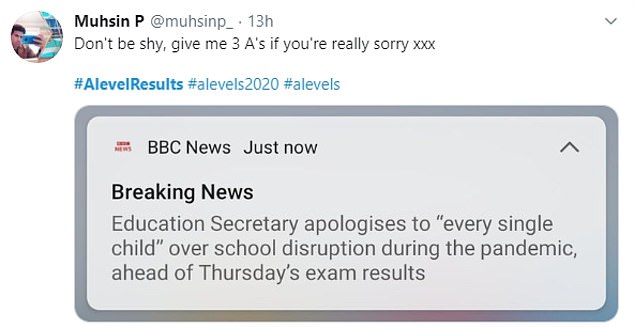 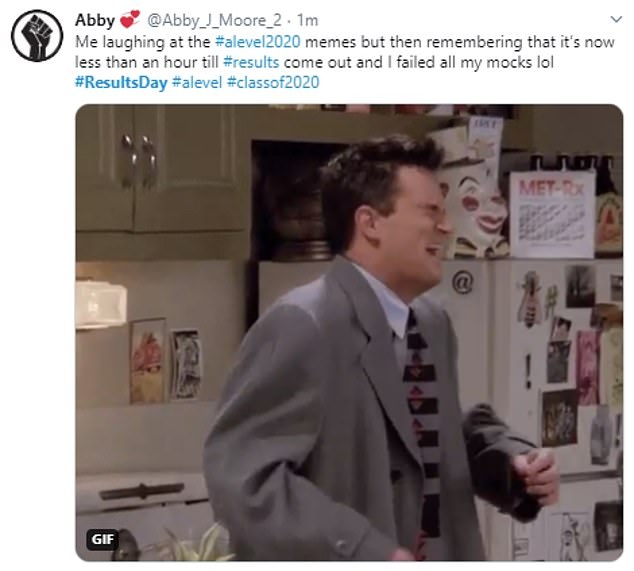 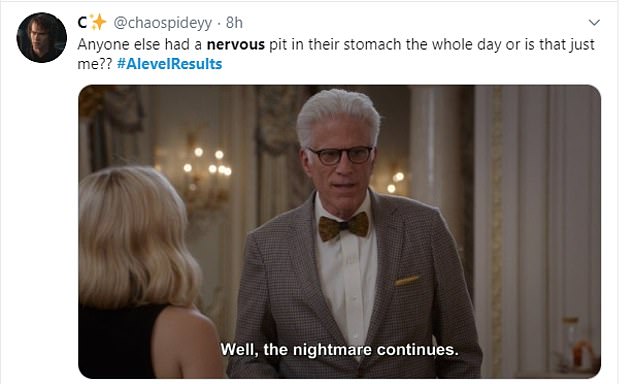 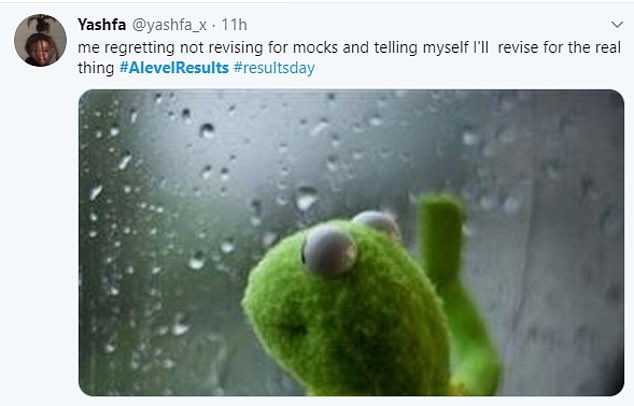 Pupils in England will not be allowed to have their exam results upgraded when they are published today.

The Government announced late on Tuesday that A-level and GCSE students will be able to use results in valid mock exams to appeal if they are unhappy with their results.

Writing in The Daily Telegraph newspaper, Mr Williamson said that allowing teachers’ grades to be used would see students lose out.

He said: ‘We would have seen them shoot up, which would devalue the results for the class of 2020, and would clearly not be fair on the classes of 2019 and 2021.

‘But worse than that, it would mean that students this year would lose out twice over, both in their education and their future prospects.’

Mr Williamson had earlier pledged the exams system will deliver ‘credible, strong results’ for the overwhelming majority of young people, despite concerns that many could end up with results lower than they had expected to receive.

The Scottish Government on Tuesday confirmed that it would allow for all results that were downgraded to be withdrawn and replaced by the original estimates.

It followed protests from pupils across the country angry that they had been unfairly penalised by attending schools which have not historically had high levels of performance.

Labour leader Sir Keir Starmer said that it was a ‘blatant injustice’ that young people could have their futures decided by their postcode as a result of the exams system.

He said: ‘Pupils and parents are rightly worried that years of hard work are about to be undone because a computer has decided to mark their child down.

‘For too long, the Tories have considered the needs of young people as an afterthought when their needs should have been central.

‘It’s a blatant injustice that thousands of hardworking young people risk having their futures decided on the basis of their postcode.’

Gavin Williamson ruled out further changes to the grading system in the face of any exams backlash.

He told Times Radio: ‘What is clear to me is there will be some youngsters, no matter how much we try to do in terms of this system to maximise the fairness of it, who don’t get the grade they should have potentially have got.

‘That’s why we need to have a really robust system, that’s why we’ve got the triple lock.’

Mr Williamson said this would provide ‘robust grounds of appeal’ and allow pupils to take exams later in the year if required.

Asked if he was prepared to change the system again amid threats of legal action from parents, Mr Williamson replied: ‘We’re not going to be changing this system again.

Pupils from the most disadvantaged backgrounds would have been at ‘high risk’ of losing out compared to their more middle-class counterparts if exams had been delayed rather than cancelled, according to the Education Secretary.

The Education Secretary was asked if he regretted not pushing for exams to be delayed until June.

He told Times Radio: ‘If we’d been in a situation where we tried to delay the exams – and this is what happened in Ireland – what became apparent is that children from the most disadvantaged backgrounds, who maybe hadn’t had the same level of support and help, would have been at a maybe high risk of not either turning up to those exams or not having had the same level of support in the run-up to those exams as children from more middle-class backgrounds.’

Mr Williamson said there have been ‘very few examples’ where delaying exams was a ‘feasible’ route to go down.

The Education Secretary was also asked why England’s exams regulator Ofqual was not in a position to tell students on results day whether they would have the opportunity to appeal their grades, after it announced it has cancelled its press conference on Thursday.

Speaking to Sky News, Mr Williamson said: ‘The reason Ofqual hadn’t got it ready for today is because it’s obviously a decision that was made sort of later on in the process, and that they are working to make sure that information is shared with schools and colleges over the next few days.’

It came hours after Scotland’s Education Secretary announced that moderated calculated grades would be scrapped following an outcry after more than 124,000 results were downgraded.

School and university leaders have demanded clarity from ministers on how the appeals process in England will work and whether it will be completed in time for universities opening in the autumn. 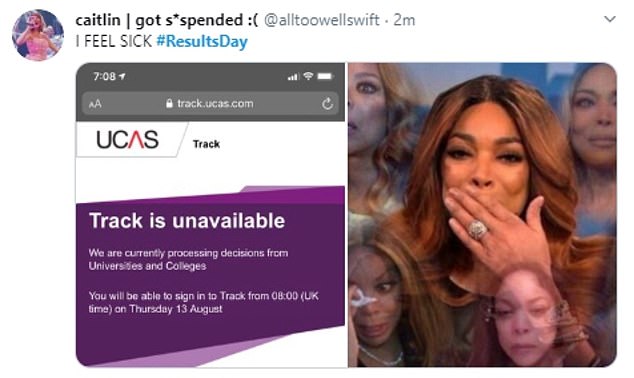 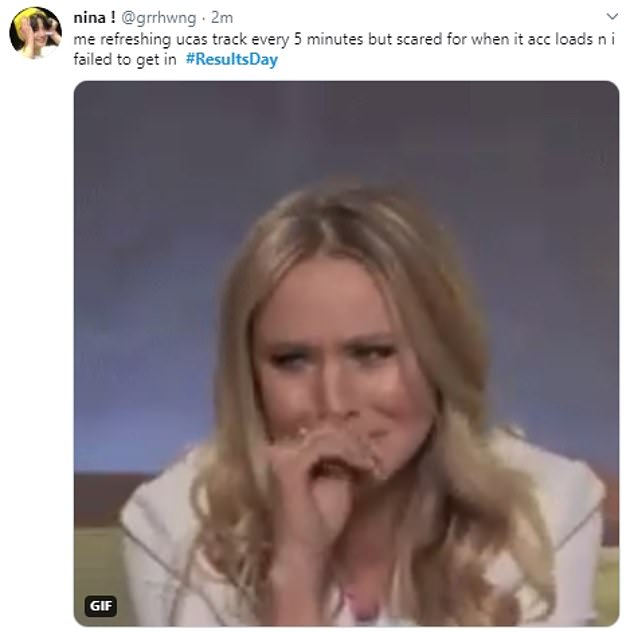 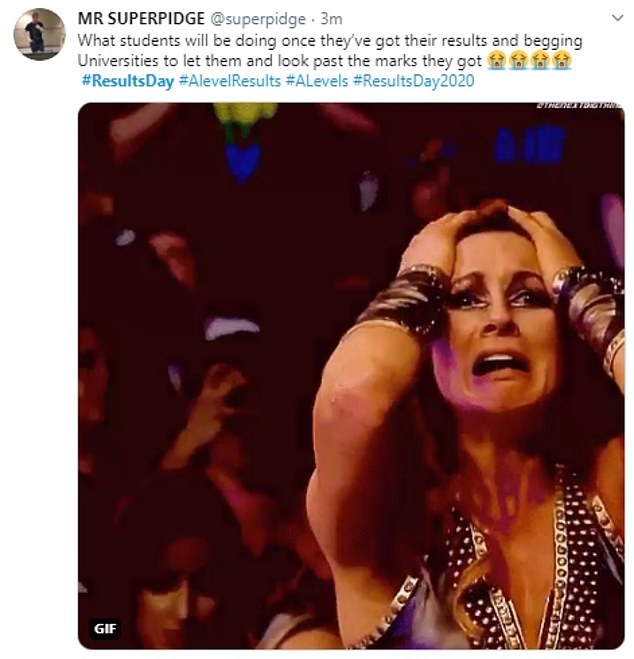 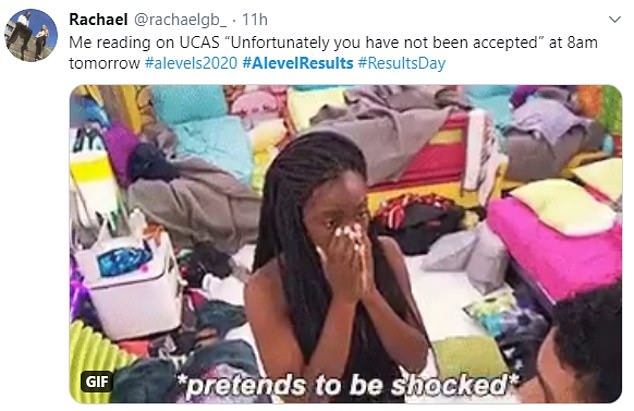 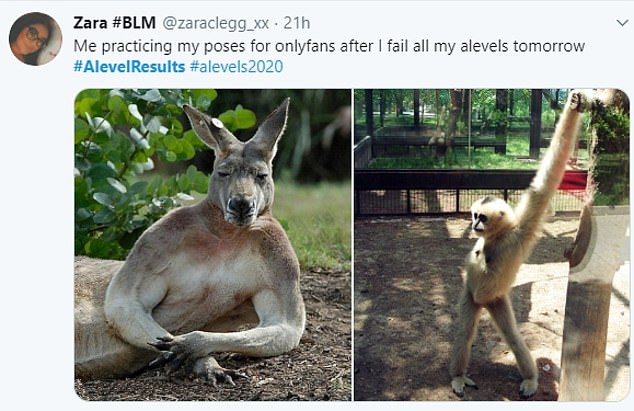 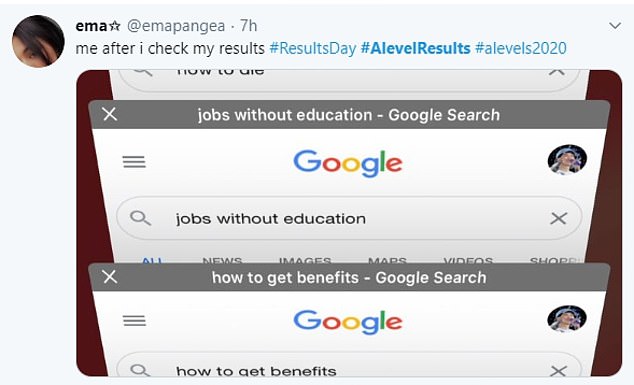 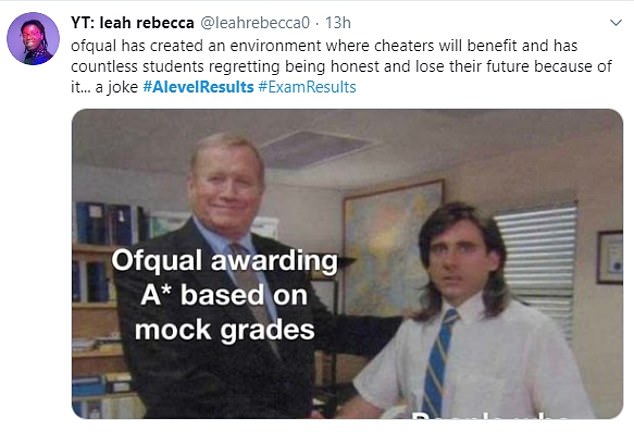 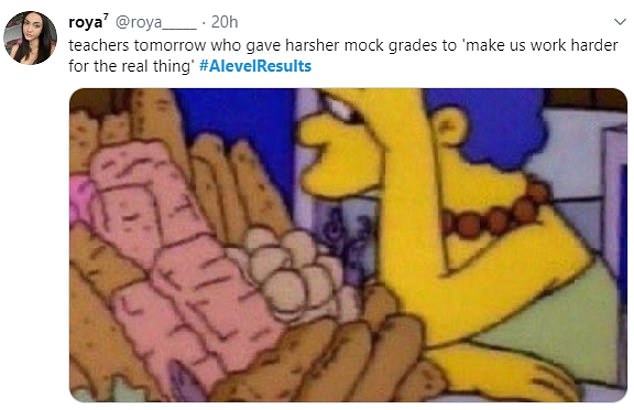 Some universities are concerned that students may not be given enough time to secure a final grade ahead of the start of term in autumn.

The University of the West England (UWE) in Bristol said any delays would cause ‘uncertainty around final student numbers’, which could in turn affect timetabling and placements.

Ministers have urged universities to be ‘flexible’ and take into account a range of evidence when choosing which youngsters to admit to their degree courses on Thursday in the wake of coronavirus.

But the head of Ucas has suggested it will be a ‘good year’ for youngsters in Britain who want to attend university in the autumn as institutions will be competing to fill courses at a time of uncertainty.

A potential fall in overseas students amid Covid-19 – alongside a drop in 18-year-olds in the population – could help school leavers in the UK secure a place, Clare Marchant, Ucas’ chief executive, has suggested.

Professor Julia Buckingham, president of Universities UK (UUK), told students that universities will be as flexible as they can and urged students to look at the courses available in clearing.

Clearing is increasingly becoming a popular route for students to find a degree course, with leading universities among those to offer last-minute places through the system.

Analysis shows that, as of Wednesday afternoon, there were 24,970 courses with availability across 146 UK universities and colleges for applicants living in England.

Of the 24 Russell Group universities, nearly three in four (17 universities) have at least one course advertised on the clearing site, with 4,485 courses potentially available.

Geoff Barton, general secretary of the Association of School and College Leaders (ASCL), said teachers are likely to face questions from ‘disgruntled’ students over appeals on Thursday which they will struggle to answer due to the last-minute announcement and lack of detail about how the process will work.

The Ucas deadline for applicants to meet their academic offer conditions is September 7, which leaves exam boards less than four weeks to issue outcomes of appeals from schools and colleges.

Rachel Hewitt, director of policy and advocacy at the Higher Education Policy Institute (HEPI), believes university admissions officers and Ucas will receive more calls from students ‘than ever before’ following the last-minute decision to allow English students to use mock grades if they appeal.

She said: ‘It may well be that this change pushes more students to seek to appeal their grades, leaving universities to consider how to manage their places between those who achieve the grades, clearing and those seeking to appeal.

‘The reintroduction of the numbers cap for this year has further complicated this by restricting the places that universities have to give.’

On the changes to appeals, Mr Barton said: ‘Young people are going to come in to get their grades – many of whom we hope will be delighted, some of whom will be disappointed.

‘Some will be perhaps deeply disgruntled and will say ‘so that appeal process using my mock exam, how does that work Miss?’ and Miss isn’t going to be able to reply unless we hear pretty urgently about it.

‘I think there will be a sense from school leaders of us being put in a position of being on the back foot.

‘I think there will be very deep frustration around that on a day which is always emotionally highly charged, but it’s likely to be more so because of this announcement.’

Last year, 25.5% of UK entries were awarded an A or A* grades, the lowest proportion since 2007, according to statistics published by the Joint Council for Qualifications (JCQ).

England’s exams regulator Ofqual previously said that the national results are likely to be higher this summer than previous years following disruption.

Teachers were told to submit the grades they thought each student would have received if they had sat the papers after exams were cancelled.

Exam boards have moderated these grades to ensure this year’s results are not significantly higher than previous years.

Ronan Farrow facing criticism for his reporting around #MeToo