Director Denis Villeneuve first read author Frank Herbert’s 1965 sci-fi masterwork, Dune, when he was 15 years old. “I was the age of Paul Atreides,” he says of the novel’s protagonist. “And I was grabbed right at the beginning of the first page.”

The novel sees Paul relocate to the desert planet Arrakis with his parents, Duke Leto Atreides and Lady Jessica, to oversee the mining of a rare and precious spice with untold powers. It’s a story of the human condition, of warring political factions and giant carnivorous sandworms. Now, more than three decades after becoming a fan, Villeneuve has had the chance to bring Dune to the big screen.

“Paul Atreides is a young man whose facing extraordinary circumstances, extraordinary struggle and trying to navigate it with integrity, with honor, with face in the tradition of House Atreides and of Duke Leto, his father,” Chalamet says. “Paul sees that there’s the potential that he is on a path greater than he understands, that perhaps he’s not simply a regular man.”

On his journey, Paul will venture out from his parents (Isaac and Ferguson) and House Atreides at large (including war master Gurney Halleck and samurai Duncan Idaho, played by Brolin and Momoa, respectively) and into the world of Dune. Villeneuve largely eschewed greenscreens in favor of shooting on location in the deserts of Jordan and on elaborately built sets.

“The desert, it’s so big,” Ferguson muses. “It’s basically Mother Nature engulfing you and going, ‘You mean nothing.’ It takes away the ego.”

“I’ll just say that no set piece, no X-Wing, no Millennium Falcon could compare to the sheer scale of… Josh Brolin’s head,” Isaac deadpans. “It was massive — both literally and figuratively — and it really made me feel like I was in an alien planet.” 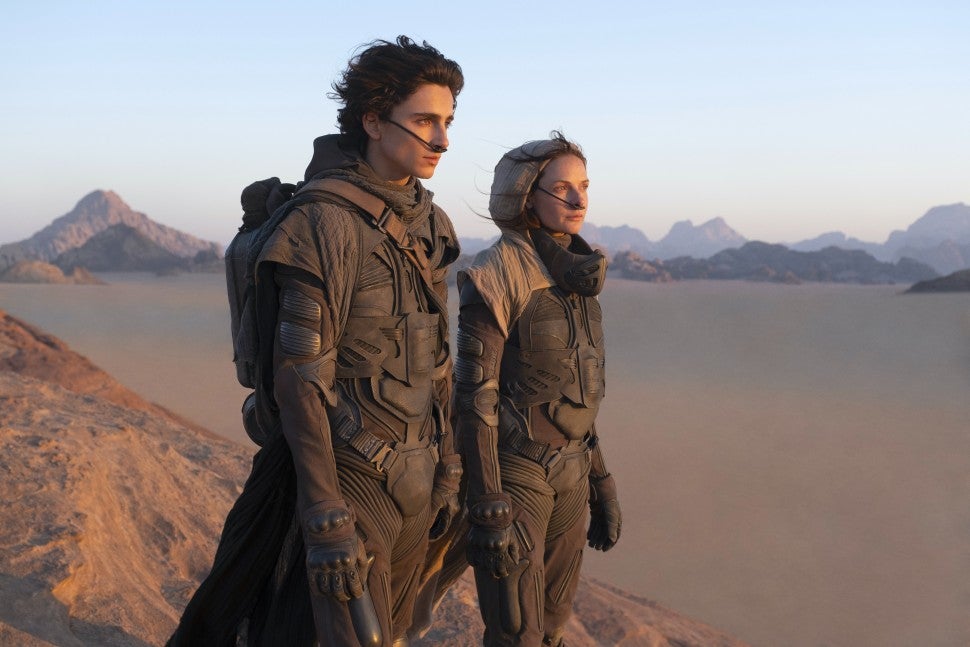 In the deserts of Arrakis, Paul encounters the native Fremen people, including Bardem’s leader Stilgar, Duncan-Brewster’s Liet-Kynes (gender-swapped from the text) and her daughter, Chani, played by Zendaya.

“She’s tough, right? She’s a warrior native to this planet. This is all she knows, so this other kid coming in, she’s not really feelin’ it,” the actress laughs. “But she sees something in him that is obviously an indicator of what is to come.”

Paul and Chani’s journeys are ultimately intertwined, as Colbert pointed out during the event: Dune is a story of two young people coming into their own in a world that, in many ways, feels broke. “Anything you can relate to there,” Colbert asked, “as a young person growing up in our world right now?”

“I do think there’s a possibility of someone seeing this movie with the coming of age that Chani and Paul are stepping into, both in the huge obligations of birthright, but also what all 15, 16, 17, 18 years old go through, which is just that growing up is hard,” Chalamet weighs in. “There is a metaphor and a lesson in this movie for everyone.”

For Villeneuve, who has spent decades dreaming of traveling to Arrakis and now years making it happen, there is no better time for Dune to arrive than our present moment. “Dune is a movie about the capacity of adaptation,” he says. “Because there are a lot of changes that are coming, Dune is more relevant than ever.”

Frozen 2 trailer: Does Elsa have a girlfriend in Frozen 2? Kristen Bell responds