This post contains some spoilers for the first season of Squid Game, available now on Netflix.

Red light, green light. Tug of war. Marbles. These are, as Seong Gi-hun and the other main characters of Netflix’s South Korean drama series Squid Game will repeatedly observe, games designed for children. Eventually, the mastermind of the brutal contest — in which 456 people in dire financial straits will risk their lives for a huge cash prize — will explain that as his adult life became devoid of joy, he hearkened back to the games that thrilled him so much as a boy.

On the one hand, Squid Game is an intensely mature piece of television. It is frequently ultra-violent, occasionally frank sexually, and throughout a dark satire of income inequality. On the other, it is a show meant to appeal to its viewers’ twisted inner child. It’s not just the games themselves, but the brightly colored, oversized playground (both metaphorically and, in a few sequences, literally) in which the players are forced to live and compete. Despite a big cast, the storytelling is relatively simple and straightforward. And the satirical elements about the evil billionaires who come to bet on the game can at times feel like how a grade schooler — particularly a grade schooler whose teachers have exposed them to The Most Dangerous Game, gladiator fiction, etc. — might imagine the One Percent to be.

For the most part, writer director Hwang Dong-hyuk’s mix of high and low elements like that works incredibly well. The first two episodes are largely devoted to showing the desperate lives of gambling addict Gi-hun (Lee Jung-jae), disgraced embezzler Cho Sang-woo (Park Hae-soo), North Korean defector Kang Sae-byeok (Jung Ho-yeon), and the other players, and explaining why each of them would participate even after learning — via a red light-green light contest featuring a giant robot and sniper rifles — of the game’s deadly stakes. But once the action settles in for good on the game’s island base, the action and suspense are propulsive and relentless, making Squid Game the rare Netflix binge that never sags.

Though we start out with hundreds of competitors — and the sheer scale of the endeavor is a huge part of what is simultaneously so creepy and so visually compelling(*) — the focus is primarily on a handful of them, plus cop Hwang Jun-ho (Wi Ha-joon), who impersonates a guard while searching for the missing brother he believes participated in the game years earlier. (Other core players include immigrant worker Ali, played by Anupam Tripathi; elderly dementia patient number one, played by O Yeong-su; Heo Sung-tae as menacing gangster Jang Deok-su; and Kim Joo-ryoung as the unstable, manipulative Han Mi-nyeo.) The relatively tight focus makes it easier to emotionally invest in what could otherwise feel like hollow, bloody spectacle. The characters are for the most part broad types — Gi-hun a rascal trying to make the best of a bad situation, Sang-woo the smug overachiever, Deok-su the schoolyard bully, etc. — but the actors are given enough room to fortify each one with enough individuality for the many deaths to have meaning. In particular, the final competition feels emotionally rich in a way that neatly underscores the monstrosity of the whole affair. 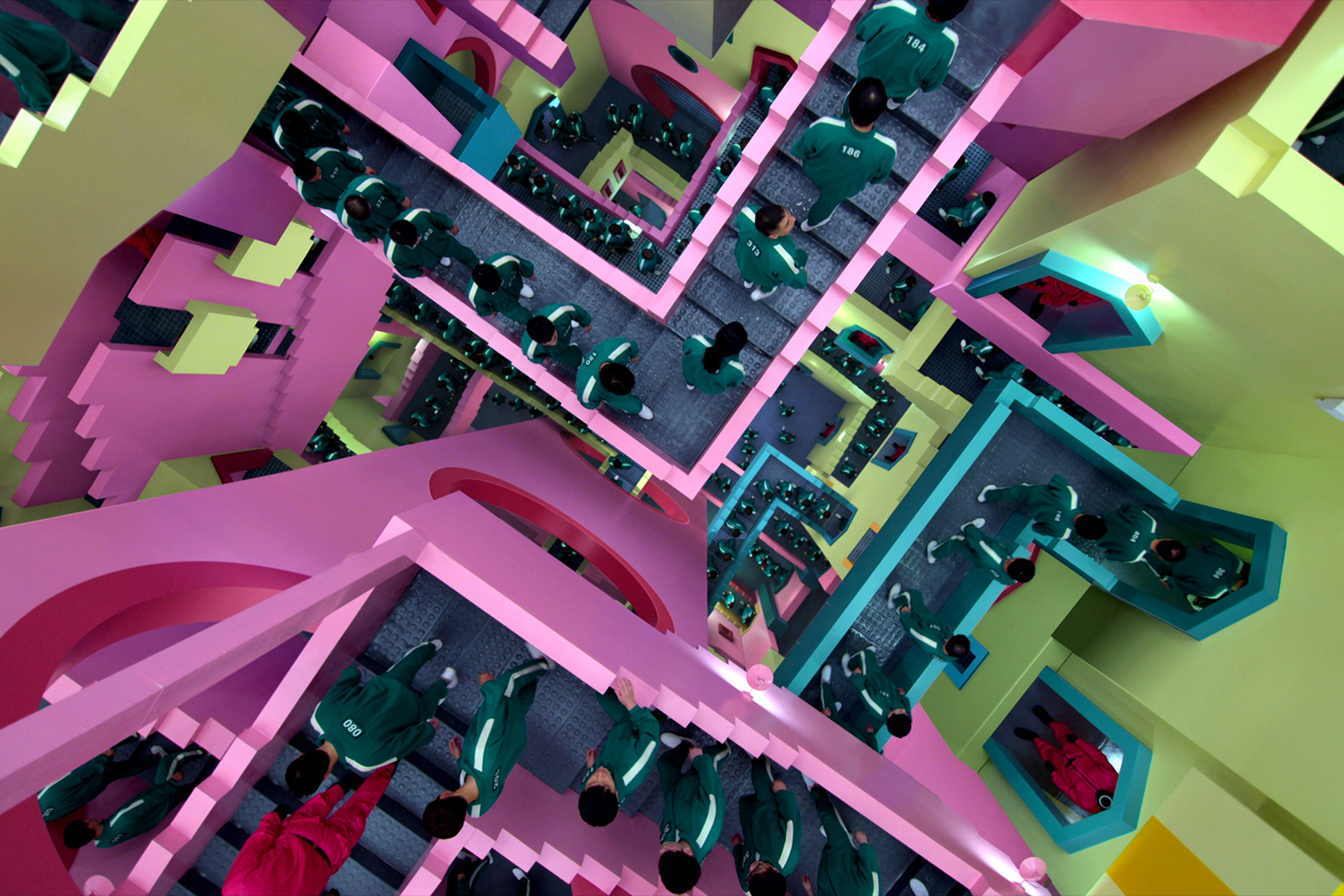 (*) The production design is so vividly weird — particularly the Day-Glo-colored infinity staircases the players march through on the way to each game — that it (or maybe just art director Chae Kyoung-sun) deserves very high billing.

It’s been nearly a month since Squid Game premiered. It’s always impossible to know how many people are watching anything on a streaming service, but this one certainly feels like a phenomenon. It’s far from the first international series to hit big for Netflix (see also Lupin, Money Heist, and Elite, among others), but the level of sustained online chatter about Squid Game rivals few of the streamer’s shows outside of Stranger Things and Bridgerton. This response is a testament to the filmmaking craft of Hwang and his collaborators: This is an exciting (if at times stomach-churning) yarn, told with flourishes that enhance everything that’s happening. But Squid Game also feels very much a show of the moment, even if Hwang is far from the first to tell this kind of story onscreen (think 1987’s The Running Man, with Arnold Schwarzenegger, or the 2000 Japanese film Battle Royale). The world has been through so much economic, physical, and emotional hardship in the past couple of years, even as the fortunes of the wealthiest have increased. We live in a time where the border between parody and reality feels agonizingly thin, to the point where if we found out there was a real Squid Game-style tournament happening somewhere, not only would many of us not be surprised, but there would be cable-news personalities and members of Congress lining up to defend the practice within hours of this discovery.

The undercover policeman plot at times feels extraneous, though it’s suspenseful in its own way, and leads to one hell of an Easter Egg. And Jun-ho’s time spent impersonating a Squid Game staffer allows the filmmakers to build out the world beyond what the players see — enough to potentially justify a follow-up season. A sequel isn’t exactly needed, but unless civilization in general starts figuring its act out, Hwang may soon have new reserves of creative anger to tap into. Horrifying as the fate of so many of the players is, you can almost appreciate their willingness to play these kids’ competitions, which hark back to a time when we couldn’t have imagined something like life in 2021, much less something like what’s depicted in Squid Game.