Coronation Street star Victoria Ekanoye has opened up on her breast cancer diagnosis and urged women to check their breasts regularly.

The actress, who portrayed Angie Appleton in the ITV soap, appeared on Thursday’s episode of Loose Women where she spoke about discovering a lump while breastfeeding her son.

Speaking to panel Charlene White, Brenda Edwards, Gloria Hunniford and Jane Moore, Victoria, 39, spoke about her upcoming double mastectomy and said, while it was a very invasive surgery with a long recovery period, if she can eliminate the risk as much as possible, ‘that’s what I’m going to do’.

‘I don’t want to look over my shoulder for the rest of my life, I have a baby boy,’ she added.

Victoria, who welcomed her first child with partner Jonny Lomas earlier this year, added: ‘I can’t even begin to think about not being there for them.’

Bringing nine-month-old Theo on screen and giving her beloved son a cuddle, Victoria asked: ‘How can I not do everything in my power to make sure I’m still here for him? 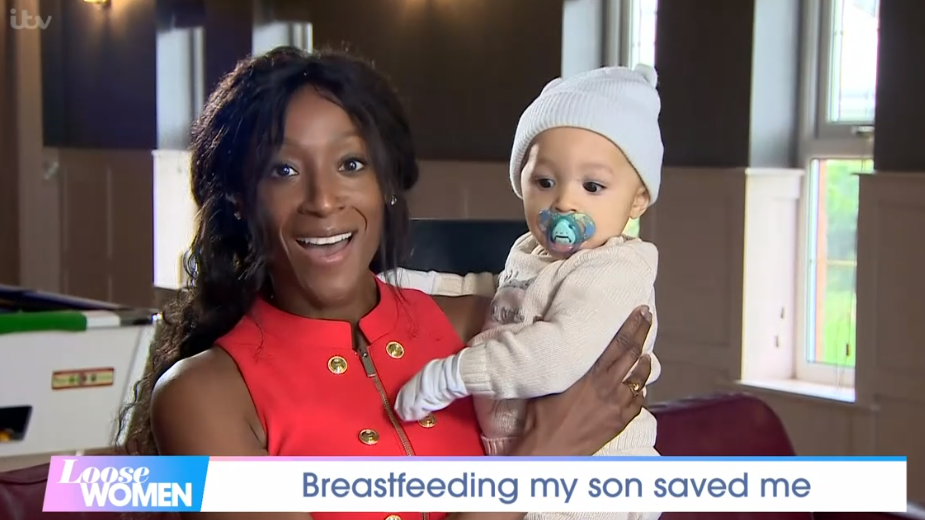 ‘As cheeky as he is, as boisterous as he can be, he’s just our everything. We’ll do anything we can to give him the best life that he can.’

Theo was six months old when she first felt the lump, which became so big she ‘didn’t have to look for it’.

At first, doctors thought the lump was benign but, wanting to be sure, Victoria sought a second, and then a third opinion, as a second lump appeared, and was ultimately diagnosed with the devastating disease.

‘They’re medical professionals,’ she said, adding: ‘I went with my gut.

She urged other women in a similar position to ‘take ownership of your body and no matter what happens, if in your gut it doesn’t feel right, go for that second or third opinion.

‘They’re professionals and experts but you’re an expert of your own body.’

She praised the One Stop Breast Clinic, where she underwent two biopsies, ultrasounds and other tests, and revealed she ‘got really upset during the biopsies’ as ‘I just knew.’

‘The hardest part has been telling people that I love and care about,’ she admitted.

The segment hit hard for the panel, with Brenda having been previously diagnosed with stage three breast cancer and Gloria losing her daughter, Karen, to the disease.

Victoria urged people to check their breasts regularly, as, even though her mother and aunt had previously fought breast cancer, they were not carrying the breast cancer gene and Victoria wasn’t thought to be at a higher risk.

Due to catching the disease early, however, she has ‘a great prognosis’ and ‘a great chance of coming out of this’.

She explained it was best to check yourself once a month rather than every day, as to do it in too short a space of time will not allow you to notice small changes.

Victoria, who also has Sickle Cell disease, is hosting a Bye Bye Boobies Fundraiser to raise money for the Prevent Breast Cancer and Sickle Cell Care Manchester charities, of which she is a patron.

The popular actor previously spoke to OK! magazine where she said the diagnosis represented a ‘really big unknown’ but the family is staying positive.

‘We’re being really optimistic, and positive, and really lucky that we’ve caught it as early as we have. I don’t know if lucky is the right word, but that’s how I feel,’ she said.

‘Theo is so young and the thought of not being here for him isn’t something we even really want to entertain.’

Victoria announced her pregnancy in November of last year, and gave birth to baby Theo in March of this year.

She wrote on social media at the time: ‘Our prince, our love, our world, our miracle,’ followed by two little blue heart emojis, as well as an angel baby emoji.

Loose Women airs at 12.30pm on Weekdays on ITV and ITV Hub.

Mark Ruffalo Talks Playing Twins on 'I Know This Much Is True,' Taking 6 Weeks Off to Gain 30 Pounds Between Parts

Do the Radfords from 22 Kids and Counting have a nanny?