IT is six years since Vampire Weekend put out an album – a break that was long overdue for frontman Ezra Koenig.

But even he didn’t expect it to be so long. 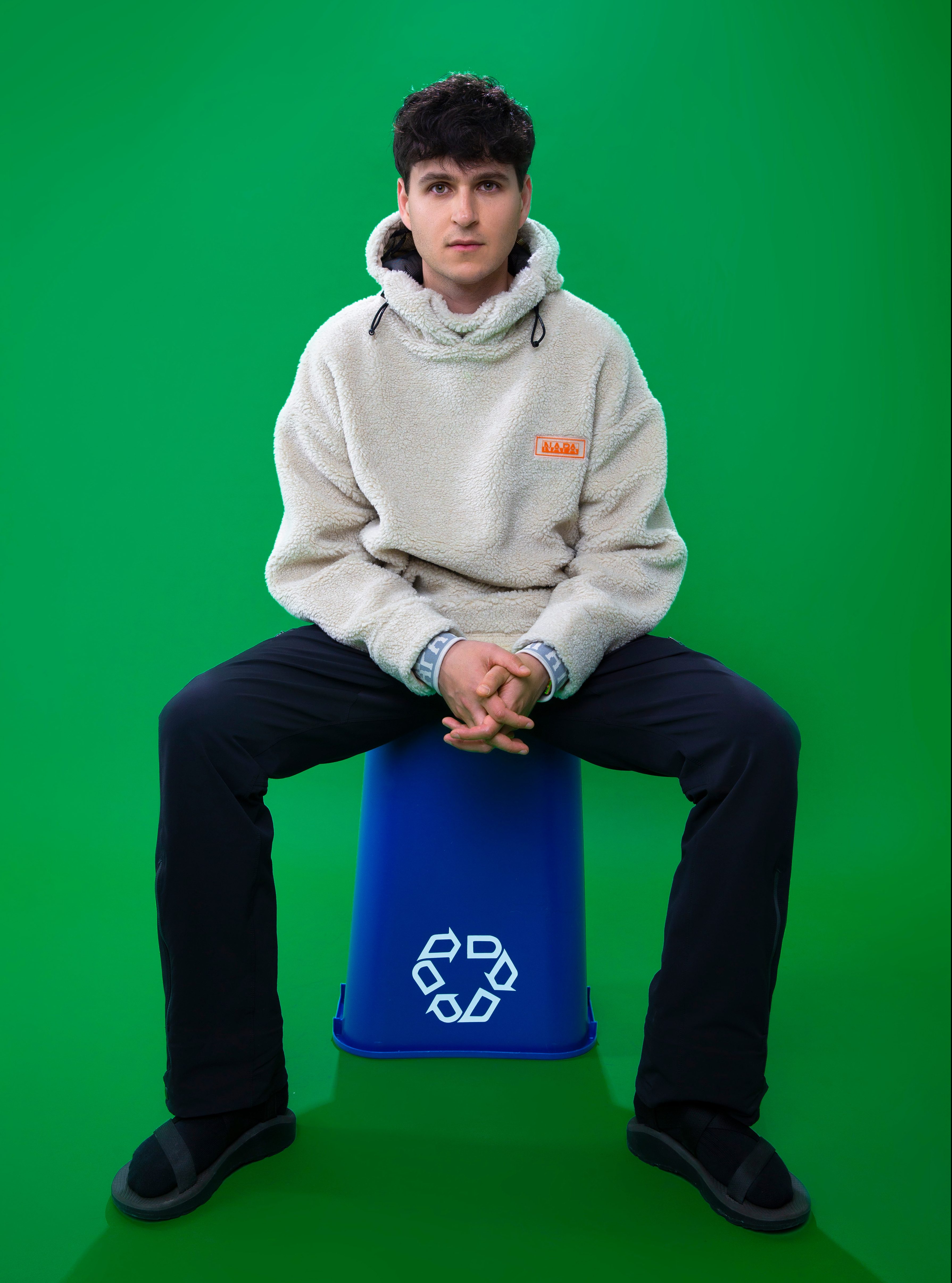 “One thing for me with music is that I can’t force it,” he says. “I took some time off, then when I started work, things just took longer. This definitely feels like a new phase of Vampire Weekend.”

In his time away, Koenig has moved to Los Angeles and become a dad to son Isaiah with his long-time girlfriend, the actress Rashida Jones.

Several songs on the album deal with relationships, while the title — Father Of The Bride — is borrowed from the 1991 rom-com starring Steve Martin.

Koenig is jet-lagged when we meet, having flown in from LA the evening before. But he chats cheerfully about his seven-month-old son. 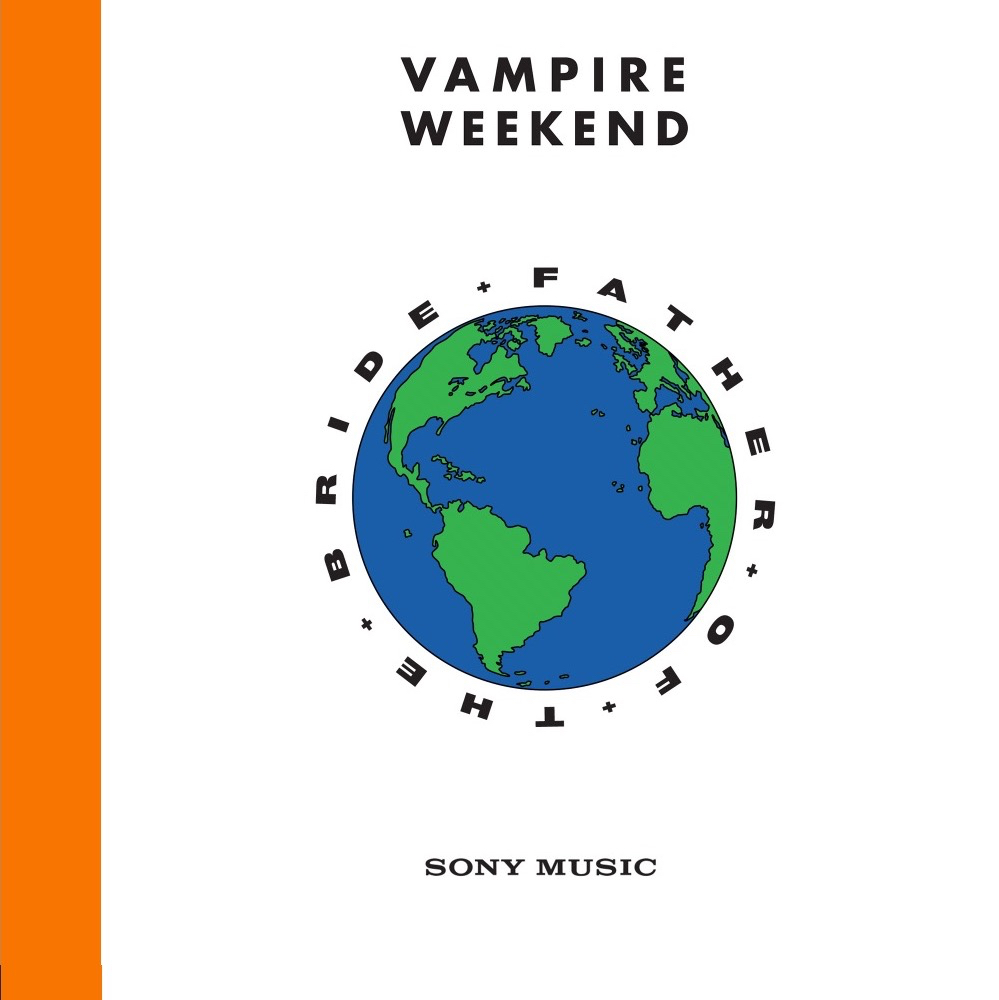 He looks like he has just got out of bed, wearing what looks like a smoking jacket, wide trousers and long socks.

Vampire Weekend were formed in 2006 after meeting at New York’s Columbia University.

The guitar quartet with preppy songs about the Oxford comma and references to Cape Cod had a a huge hit on their hands when their self-titled debut album was released in 2008.

Koenig says: “The early years of the band were a whirlwind. There was a lot of excitement and also a lot of stress and anxiety making the follow-up albums.

“It felt like a real life-or-death thing for us, as we had success on our first album, which seemed like a one-in-a-million thing to happen. 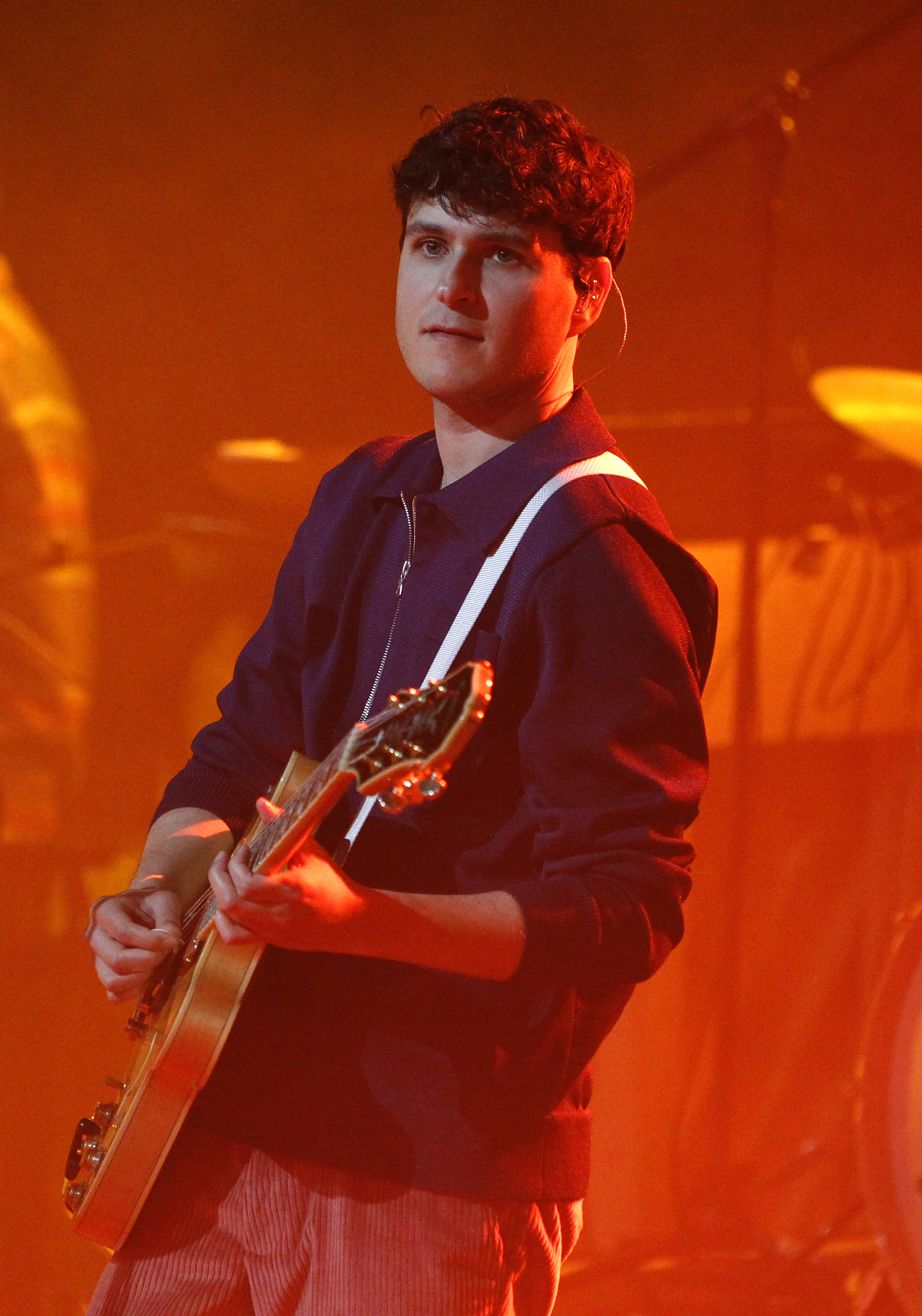 “We didn’t wait around too long in between the first three albums (including 2010’s Contra and 2013’s Modern Vampires Of The City) as we benefited from the very specific moment when we started. So taking time off after the third album was a necessity.”

After 13 years together, there have been changes.

While bassist Chris Baio and drummer Chris Tomson are very much part of the Vampire Weekend live show — and also contribute to the record — multi-instrumentalist Rostam Batmanglij left in 2016 to pursue a solo career. But he still features on Father Of The Bride, with a production credit on Harmony Hall.

Koenig says: “The creative relationship between Rostam and I pre-dates the band. The first time we worked on a song was in his dorm room.

“Every album has been a little bit different in terms of how we made it. It’s always been important that there are no rules.

“From album one to four, it’s been a very smooth transition in terms of how we work and who is involved.”

Every album has been a bit different . . . when you make a new one, there are no rules

Steve Lacy of R&B group The Internet features on two tracks, while Danielle Haim appears on three. Haim’s partner Ariel Rechtshaid — who has worked with Madonna, Adele, U2 and Brandon Flowers — co-produced the album with Koenig himself.

Koenig says: “I know it seems like a big story, the way we’ve made this album, but I served the same role of singer, songwriter and curator as much as I performed them on the first album.

“So it wasn’t a massive shift to me. But who I am working with has changed, as has the whole flavour of the project to some extent. But Vampire Weekend will always have a gang mentality.”

There was lots of “hanging out” making the record.

Koenig continues: “I like the idea that if you are going to work with someone, then you already know them — or you really get to know them and it’s not just one day in the studio.

“Danielle lived upstairs from where me and Ariel were recording, so it was easy to get her involved. I knew I wanted to have some duets on the album and in terms of songwriting, they were clearly indebted to Sixties and Seventies country duets.

‘LIFE OF THEIR OWN’

“For a long time, I wanted the perfect country singer to duet with and I went pretty far down the line with some people.

“But I just couldn’t bring myself to submit songs to somebody I didn’t know.” 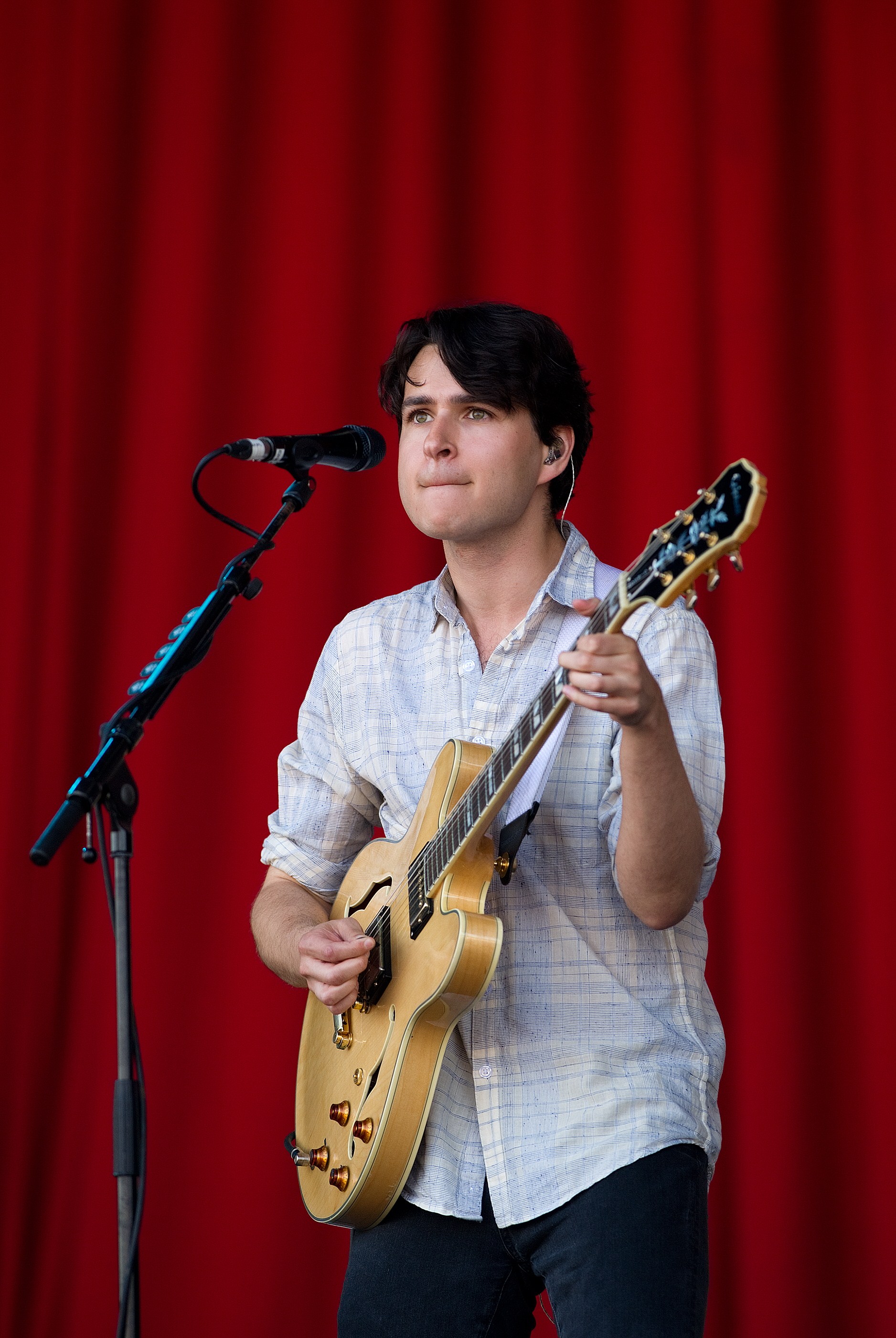 With 18 tracks on the album, Koenig clearly had no problems coming up with material.

He says: “Nothing excites me more than looking at the whole Vampire Weekend songbook and having 18 new additions.

“I almost wish there were more. Every song on the album is equally important to me.

“It’s just a chance to show the terrain, the different sides of the album. The hardcore Vampire Weekend fans and me as a songwriter will listen to every song.

“Then the casual fans will listen to a handful. That’s how it has always been and that’s fine.

The new album is bursting with ideas. Standout tracks include first single Harmony Hall, Hold You Now — which samples the soundtrack to 1998 war movie The Thin Red Line and gives a co-writing credit to composer Hans Zimmer — and the ballad Unbearably White, which was produced by BloodPop.

I associate being creative with being an amateur

Koenig says: “When I look back at the last album, there was a bit of a quarter-life crisis.

“I was depressed during some of the time of making it. Whereas album one has a lot of young, excited vibes, album three is anxious and fearful.

“But I realise that very few of us easily transition into adulthood without dealing with anxiety and depression.

“The albums mirrored my own life and a lot of people’s lives. So with album four, while I’m still interested in serious things, I also wanted to make an album and make subsequent albums that reflect life and how I understand it.”

One thing hasn’t changed in the years since Vampire Weekend came into being.

“I still can’t think of myself as a full-time, professional musician,” Koenig admits, with a laugh. “It’s not necessarily impostor syndrome. I can recognise the fact that this is reality.

“Maybe this is just my own myth or something but I just associate being creative with being an amateur.

“I have a piano and an electric guitar but I don’t even have an amp. I’m still getting used to understanding that this is what I do.” 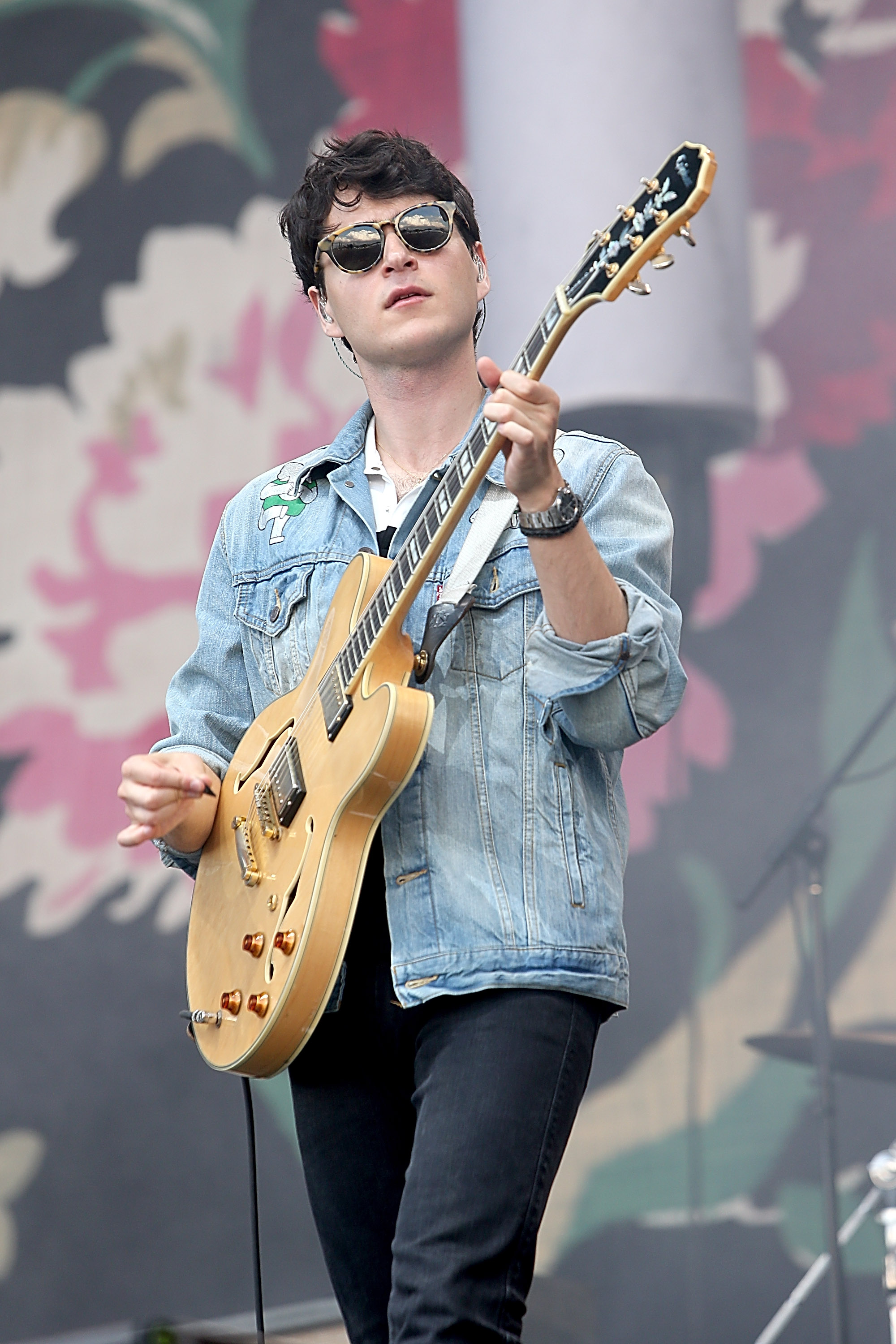 Away from music, Koenig created Neo Yokio, an animated comedy-adventure series on Netflix about a demon-slaying boy, voiced by Jaden Smith.

Koenig says: “I needed a break from music and wanted to do something bizarre and fun. I always liked anime and animation and I had this idea.

“Making the show was very similar to making an album in a sense.

“With music, I’ve always put 99 per cent of my ideas and music into Vampire Weekend, so I could never make a solo album — I’d have no ideas left. So I think of Neo Yokio as my weirdo solo album.”

Koenig moved to LA a few years ago to be with his partner Jones and made the album there. But Koenig refuses to call Father Of The Bride his “LA album”.

He says: “Coming from New York, I could never do that with something so personal. I understand people want to hear it that way but my relationship with LA is a little bit fraught. I love the place but deep down my preference would be to live in New York.

“I tried to stay as long as I could but my personal life was based in LA.

“I am figuring out how to spend more time there because deep down New York is for me as a person, an artist and family. My family has been in New York for generations.

“Every single male in my family for more than 100 years was born in New York — and before that, Eastern Europe. I want my son to know about that.”

most read in music 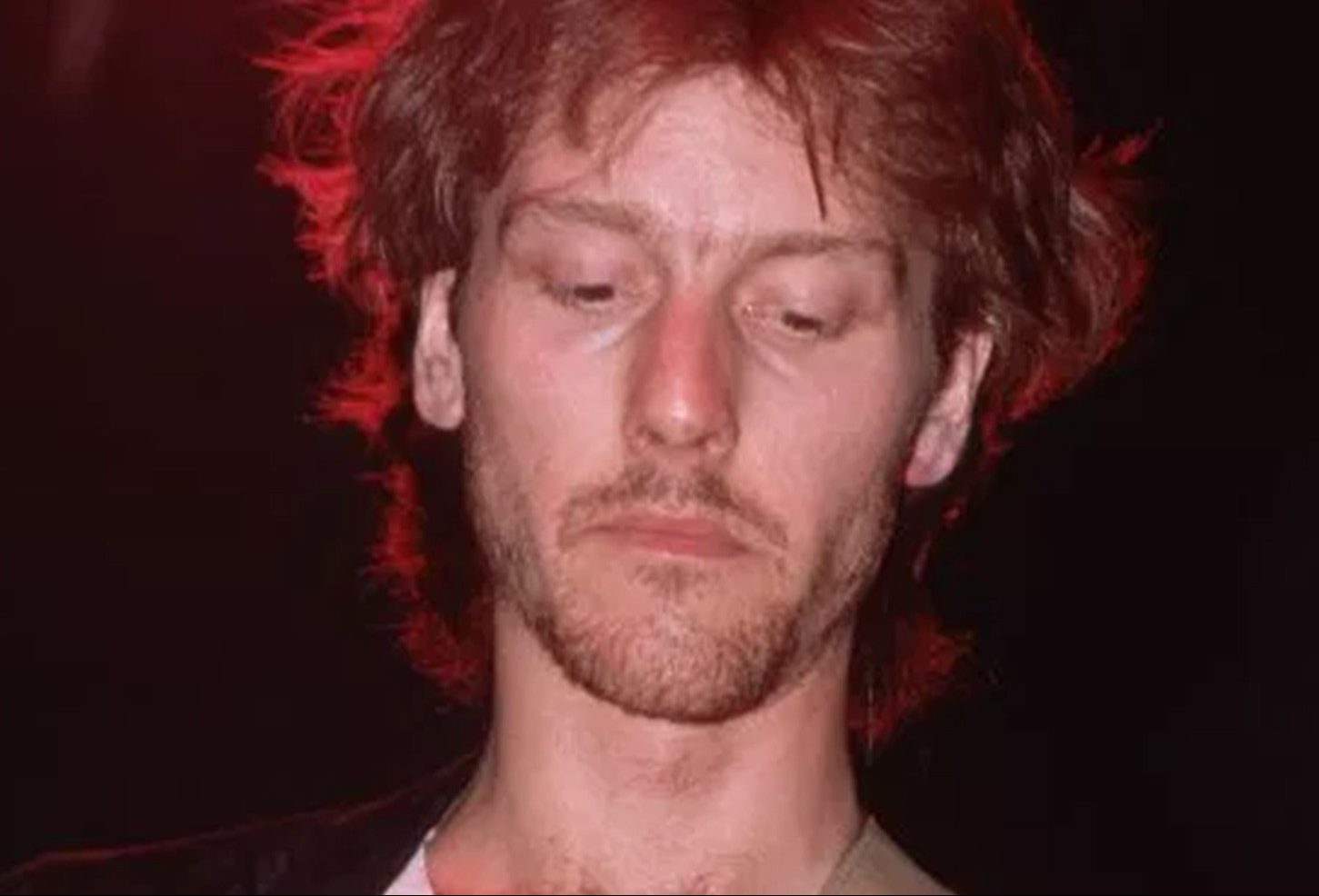 Vampire Weekend return to the UK in June to play Glastonbury, alongside some other European festival appearances, in the middle of a US tour.

Koenig says: “Looking ahead, I have a mix of feelings. I’m excited to release this album and I’m the most excited about touring ever in my life, really.

“But I’m also at a phase in my life where I would rather be home more than ever. This year will be hard but I’m going to embrace it and enjoy every moment.”

‘Emma’ Review: Anya Taylor-Joy Leads the Most Stylish Jane Austen Movie Ever Made