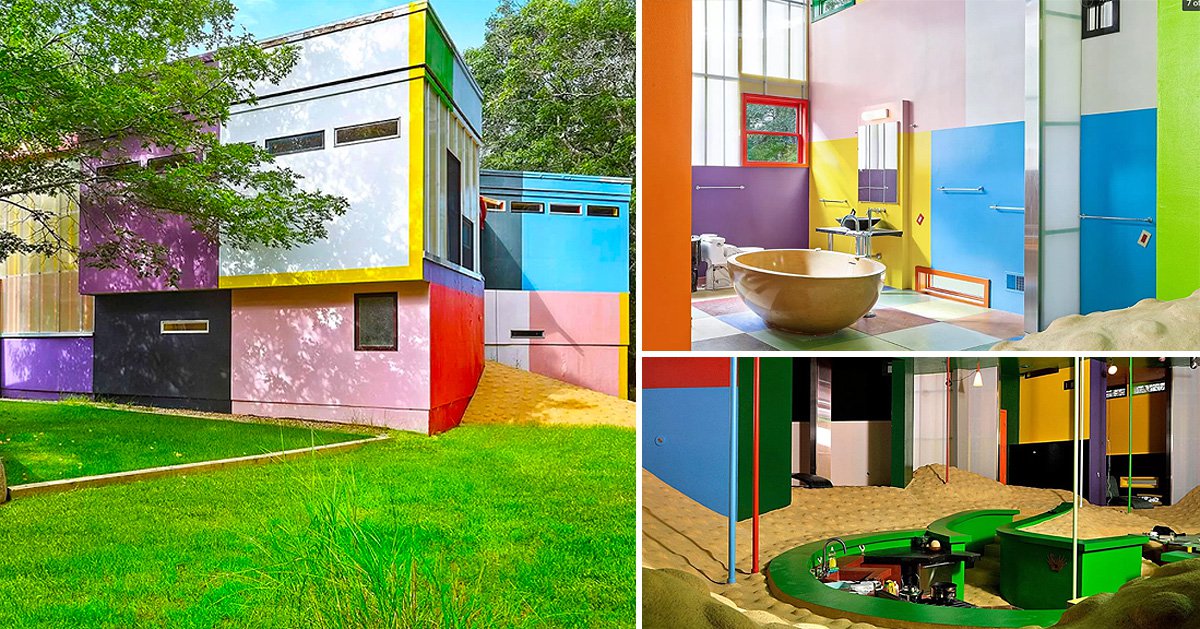 While the trend right now might be for shades of grey, some people prefer a bit of colour.

And it can’t get much brighter than this property, which is decorated in 52 different shades.

Known as Bioscleave House (or Life-Span Extending Villa), it was designed by avant-garde artists Madeline Gins and Arakawa, who were proteges of the surrealist artist Marcel Duchamp.

The pair have shown and published their work worldwide producing many radical books and exhibitions including at The Guggenheim Museum.

Built in 2008, the property has four bedrooms and three bathrooms.

The layout is a little unusual as the 2,700-square-foot is split into four rectangles, jutting out of a central living space, featuring the sunken kitchen and dining area.

The house isn’t just about lots of colour, but texture too – the floor is made of bumpy packed Japanese earth.

Reversible Destiny, an organisations founded by the artists, explains ‘Arakawa and Gins designated Biocleave House as an “inter-active laboratory of everyday life” whose terrain and walls are deliberately realized in unexpected ways to keep a person ‘tentative’ so that they must actively negotiate even the simplest tasks.

‘This heightened body awareness and the challenging of senses can, they believed, allow the body to constantly re-configure itself and with time become a means to strengthen the immune system.

‘Bioscleave House fundamentally proposes an architecture of viability that helps to sustain one throughout life, and even extend human lifespan indefinitely.’

Beyond the front house, there is a back connected house containing more of the accommodation.

Previously listed last year, the property has just gone on the market again, with a price reduction of 25%.